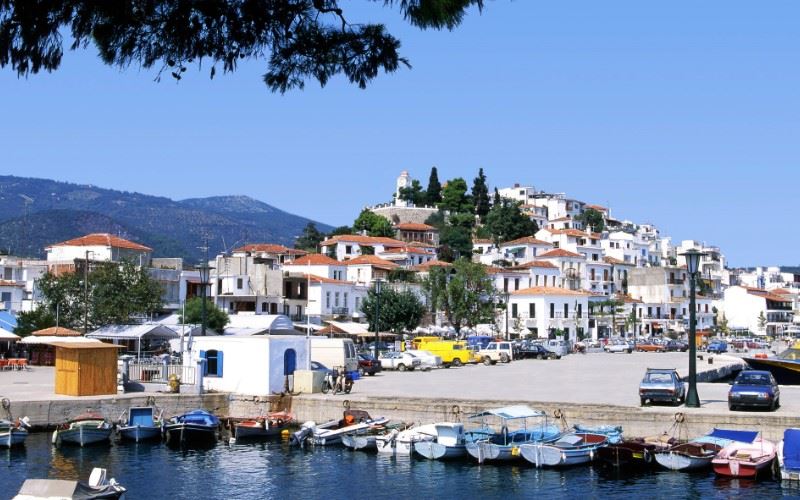 An island hopping holiday in the Sporades: Skiathos, Skopelos and Alonissos

The three islands of the Sporades are very different to one another. In fact there are four inhabited islands but Skyros, the fourth is not an island that Sunvil features. There are other islands but these are uninhabited. The Sporades are an archipelago in the northern Aegean and lie east of the Greek coastline and at much the same latitude as Volos on the Greek mainland..

Skopelos is very heavily wooded, with pine trees reaching down to the sea.  Alonissos is the least visited, is surrounded by many small satellite islands, has many contrasting facets and borders its National Marine Park, the largest marine protected area in Europe and home to the endangered Monk Seal Alonissos is the largest of the three islands, almost three times the size of Skiathos which is the smallest. Skiathos is trendy and lively with some of the best beaches in Greece.

On arrival at Skiathos Airport, transfer on arrival to the port for your ferry to Skopelos.

The picturesque port of Skopelos is a classic, Greek island amphitheatrical town. It is one of the most characterful island ports in Greece, with narrow climbing streets and over 100 tiny chapels. Mulberry trees line the waterfront and shade the many restaurants, cafes and several chic shops. The island is green and very heavily wooded with pine, oak and plane trees which reach right down to the sea.

Overnight at the Aeolos Hotel on a bed and breakfast basis 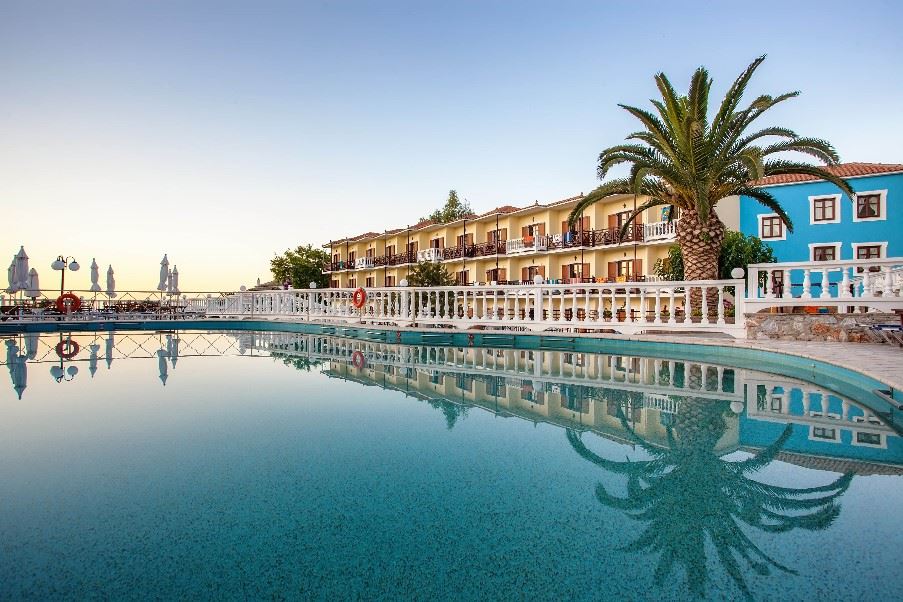 There are some very good, long beaches and secluded coves on Skopelos, especially on the west coast, which you can reach by bus or if you prefer by hired car. The waters around Skopelos are sparkling and beaches are generally a white shingle. Try Stafilos Bay, Panormos, Agnondas, Milia or Kastani, each more surprising than the last. There is excellent walking on Skopelos, as well mountain biking and sea kayaking. Historic churches and monasteries dot the countryside. Then, of course there's the tiny chapel of St John The Baptist, made famous by the ABBA film Mama Mia, although the filmmakers did make one or two alterations to the chapel’s structure! Visit the 17th century Monastery of Timios, 6 km east of the town and the 16th century Panagia Evangelistria monastery 3 km from the town - to mention but two. This is a friendly island with much to see and do, especially to people watch at one of the many cafes on the harbour front.

Overnight at the Aeolos Hotel on a bed and breakfast basis 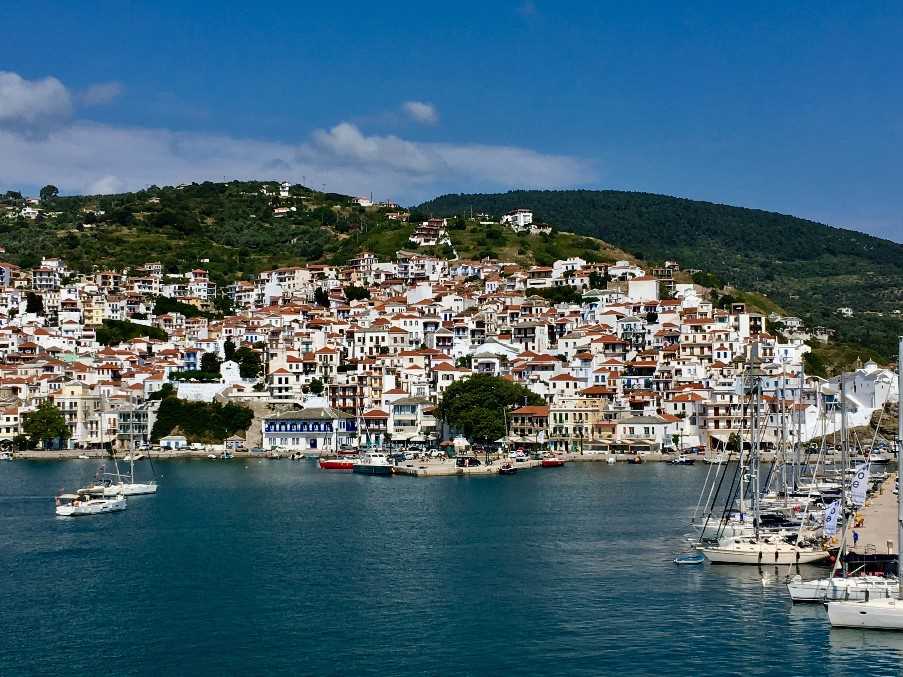 Transfer to the port and then ferry to Alonissos (30 min), the least developed and in many ways the most mysterious of the three islands; one that is quite happy to remain off the beaten tourist track. Your hotel here is the Atrium, located on the outskirts Patitiri, the port town, and a 600 metre walk to Patitiri waterfront with its shops and restaurants.

Overnight at the Hotel Atrium on a bed and breakfast basis 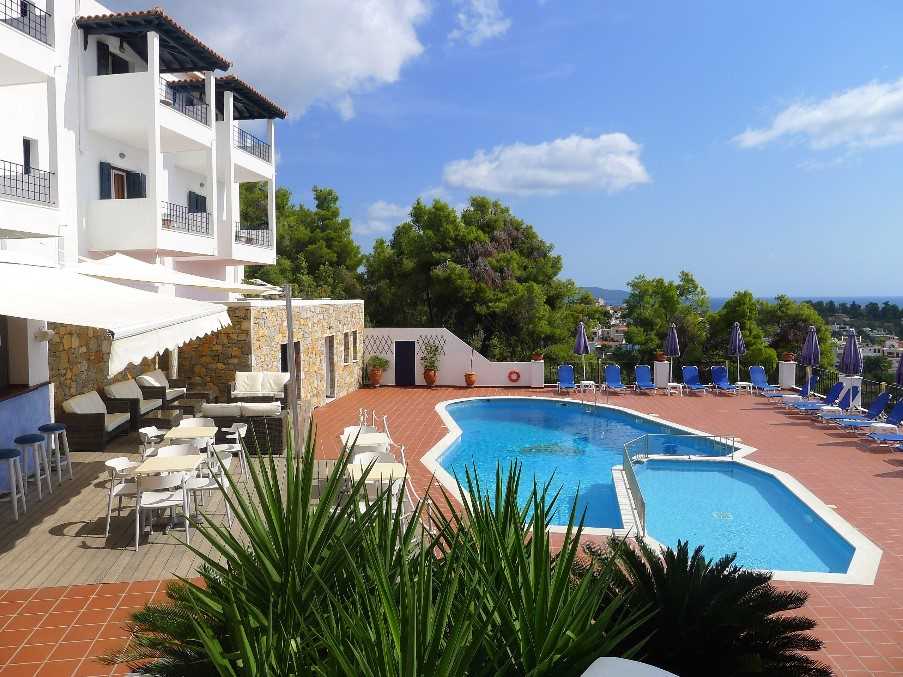 Alonissos is a long (20 km) and narrow (4 km) island with the charming fishing villages of Votsi and Steni Vala near at hand and easily reached by bus. Along the coast you will find a string of beaches - all shingle - with crystal clear waters. Patitiri is the main town and ferry port but Old Alonissos, high above Patitiri and reached by bus has stunning views. The old town was abandoned in the 1960s but most of the old houses have now been restored and frequented by artists and writers. There are now several tavernas, bars and cafes in the old town, as well as a mini-market. The old town is particularly atmospheric in the evenings. Those who have the energy can walk up to the old town in about 40 minutes via a goat track but, of course, there is always a taxi. The seas around Alonissos are designated a National Marine Park, the largest in Europe and protect the rare and indigenous Monk Seal. The organised boat trips through the marine park are a must.

Overnight at the Hotel Atrium on a bed and breakfast basis 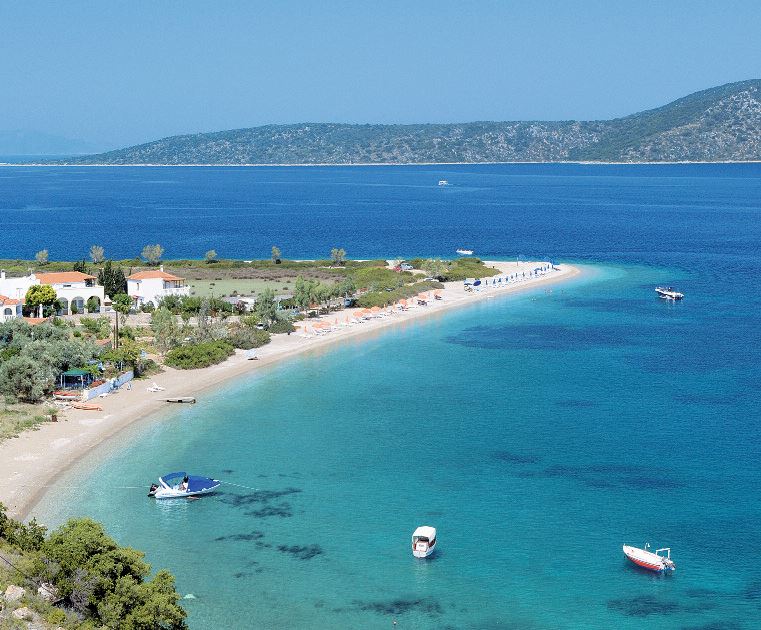 After an early transfer from the hotel to Patitiri Port you will board the hydrofoil to Skiathos ( 1 hr ).

The hotel has a pool, but why use a pool when a 5 minute walk will bring you to Koukounaries Beach, the best on the island and arguably one of the best sandy beaches in Greece. You will find many local tavernas for your evening meal. 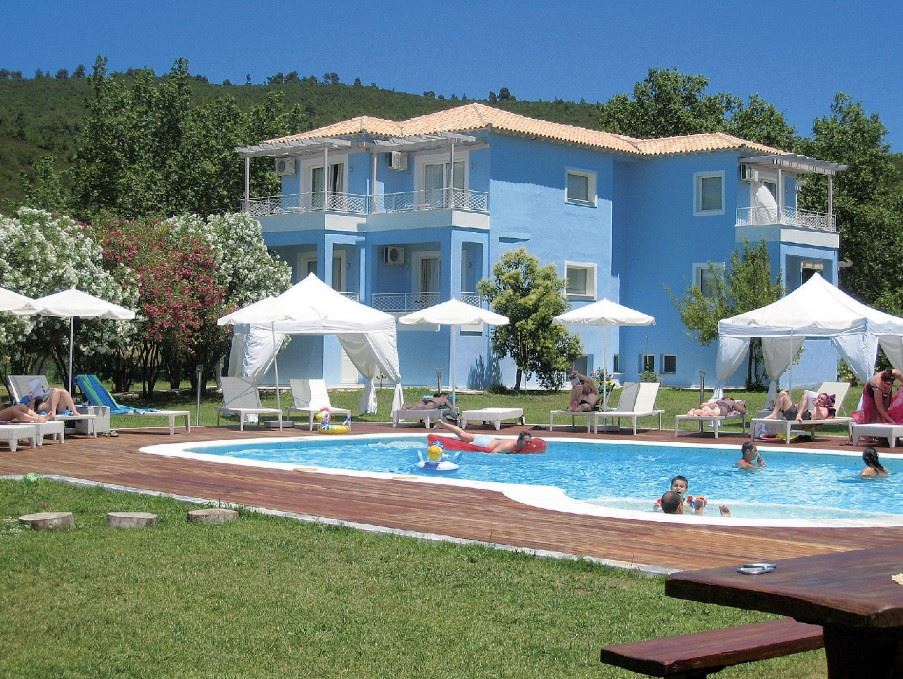 Skiathos is green, picturesque and all about sandy beaches (there are 50), the sea, water sports, boat trips and beachside tavernas. Over your five days, apart from relaxing on the beach, you should visit the old town and harbour and generally stroll around Skiathos town. It will be busy and vibrant and you can easily spend a day there - good and varied nightlife too. There is a bus service that starts at Skiathos town, runs along the southern coast and finishes on the western tip of the island at Koukounaries. You can take a boat excursion to the medieval castle as you can to the sea caves. If you decide to hire a car for the day then you can reach the remote beaches on the west coast past Koukounaries. Then there is the 19th century Monastery of Panagia Evangelistria, set in rich vegetation, 5km north of Skiathos town, which has great historical significance as it featured in the Greek war of independence against the Turks. 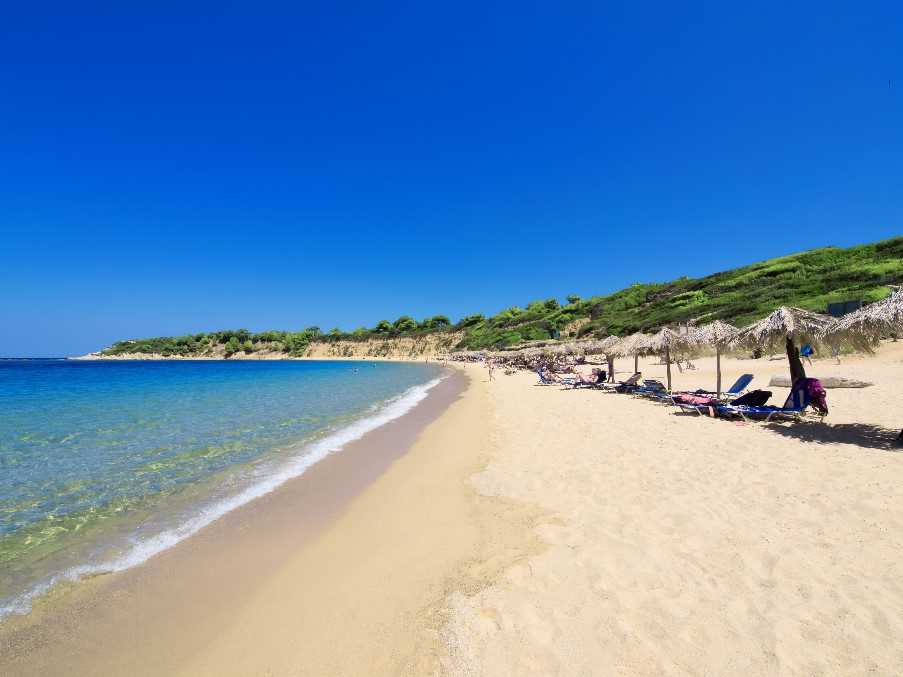 Transfer from your hotel to the airport for your flight home.

The Aeolos is our favoured town hotel and occupies a super location facing Skopelos Town, an easy 600m level walk above the sea around the bay.

The Aeolos is our favoured town hotel and occupies a super location facing Skopelos Town, an easy 600m level walk above the sea around the bay.

Its 60 comfortable rooms are simply but tastefully furnished and air conditioned with TV (BBC World), fridge, hair-dryer, modern tiled shower room, room safe (€2 per day) and balcony, most with lovely sea and town views. Rooms are twin-bedded and most can take an extra folding bed for a child. Complimentary WiFi is available in public areas.

The hotel has a lift, lounge, bar and breakfast room (complete with ancient olive tree). The large freshwater swimming pool measures 13m x 7m (depth 1m-1.80m) and is on an expansive raised terrace to the front, which also has a pool snack-bar and a separate children’s pool.

A stay here would be ideal for those wanting a comfortable stay with modern facilities, fine views and only a short walk (no hills!) from all the attractions of Skopelos port.

Set amongst the pine trees up the hill at the back of Patitiri, where the road to Alonissos Old Village begins, the Atrium has stunning views out to sea.

Set amongst the pine trees up the hill at the back of Patitiri, where the road to Alonissos Old Village begins, the Atrium has stunning views out to sea. The harbour of Patitiri, with its shops and attractive water-front tavernas, is approximately 950m away (a 15 minute walk), and it’s a similar distance to the very nice beach of Rossoum.

The Atrium provides good facilities and a high level of comfort from its upgraded and stylish 29 double or twin-bedded rooms. Not only do they all possess air conditioning, Sat  TV and a sea view balcony, added benefits (all at no extra charge) include a mini-bar (initial stock is free of charge), a safety deposit box, filter coffee machine (plus coffee!), hydro-jet shower and hairdryer. The hotel also offers free Wifi. The hotel has two swimming pools (plus one for children) and a pool bar - pool towels are provided.

The Atrium offers good modern standards and facilities in an attractive location and with excellent views from almost everywhere.

The Mandraki Village offers high quality and comfort combined with good service and an intimate atmosphere close to the most famous beach on the island.

The Mandraki Village offers high quality and comfort combined with good service and an intimate atmosphere close to the most famous beach on the island.

There is a swimming pool in the garden (towels provided), with adjacent restaurant and a pool snack bar operating during the day. The hotel also has an a la carte restaurant that half board clients may use at a supplement.  A further choice of restaurants can be found within a 10 minute walk on the road to the beach.

A beautiful short cut through a nature reserve and past Strofilia lake brings you to famous koukounaries Beach in 5 minutes. However, a choice of lesser known (and lesser populated) beaches, such as Mandraki on the north-west coast, can be reached in about 25 minutes through the pines.

Skiathos Town is 12kms distant and easily reached by the frequent local bus (25 mins., there is a bus stop outside the hotel) or by water taxi which runs hourly during the day from Koukounaries beach.

Premium Half Board (Elia Restaurant - dinner only): £199 per person, per week