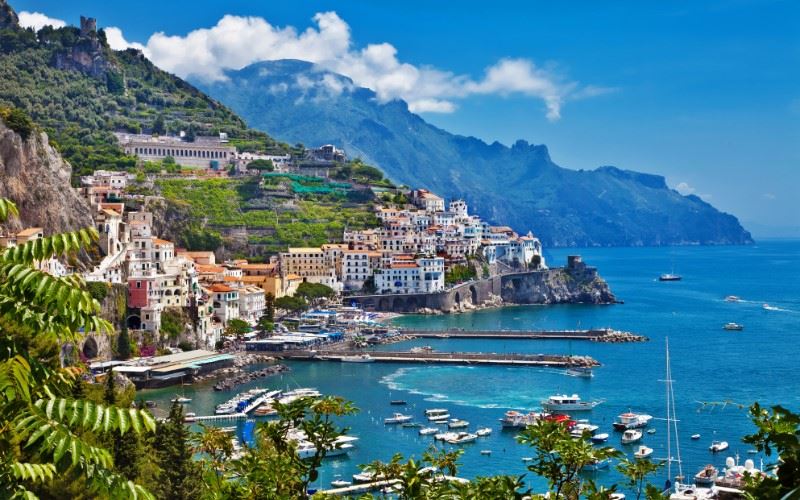 A Taste of Apulia and The Amalfi Coast

Take a chauffeur driven tour of Puglia, Basilicata and Campania, steeped in Etruscan and Greek sites. You will have the expert guidance of official guides in Alberobello, Lecce, Itria valley, Matera and Pompeii and experience some of the best coastal drives along the Amalfi Coast passing through the towns of Positano, Ravello and Amalfi.

Arrive at Bari airport, meet and greet by your personal driver and transfer to your hotel in Alberobello.

Alberobello is a UNESCO World Heritage site and home to a dense concentration of Trulli limestone cottages with cone-shaped roofs built between the mid 15th and late 18th centuries. It is one of the best preserved urban areas of its type in Europe. Overnight at Grand Hotel Olimpo, Alberobello.

Overnight at the Grand Hotel Olimpo. 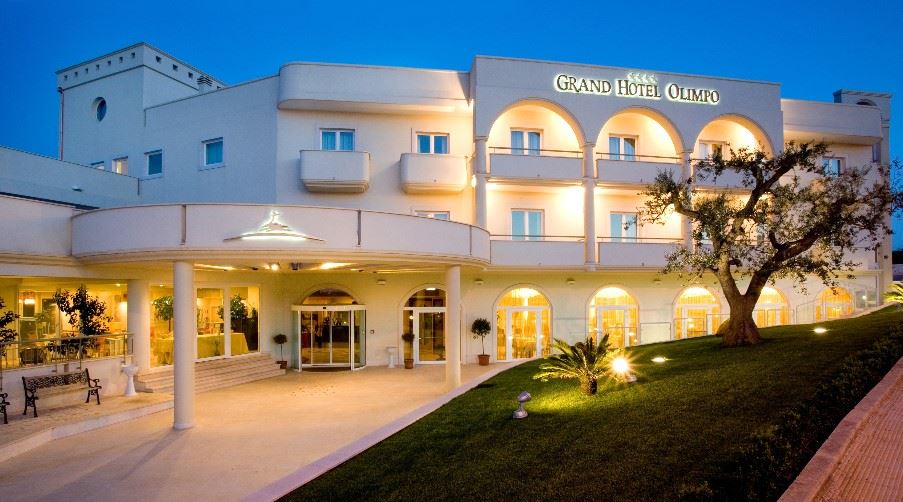 After breakfast, you will be chauffeur driven through the Itria Valley, to the picturesque Locorotondo – known as one of the most beautiful villages in Italy; the baroque Martina Franca, the pearl of Valle d’Itria, a hilltop town whose historical centre is surrounded by stone walls, with prominent baroque gates that lead to piazzas and narrow medieval streets; Cisternino, a medieval walled city where you can stroll back through time on worn, stone-paved lanes between ancient palaces, towers, shops and homes that are mostly still in use today; and Ostuni, the old citadel is built on top of a hill surrounded by ancient walls and is commonly referred to as the White Town (Città Bianca) for its white walls and white-painted architecture. Lunch (included) will be at a farmhouse where the region’s celebrated olive oil and wine will accompany your meal. 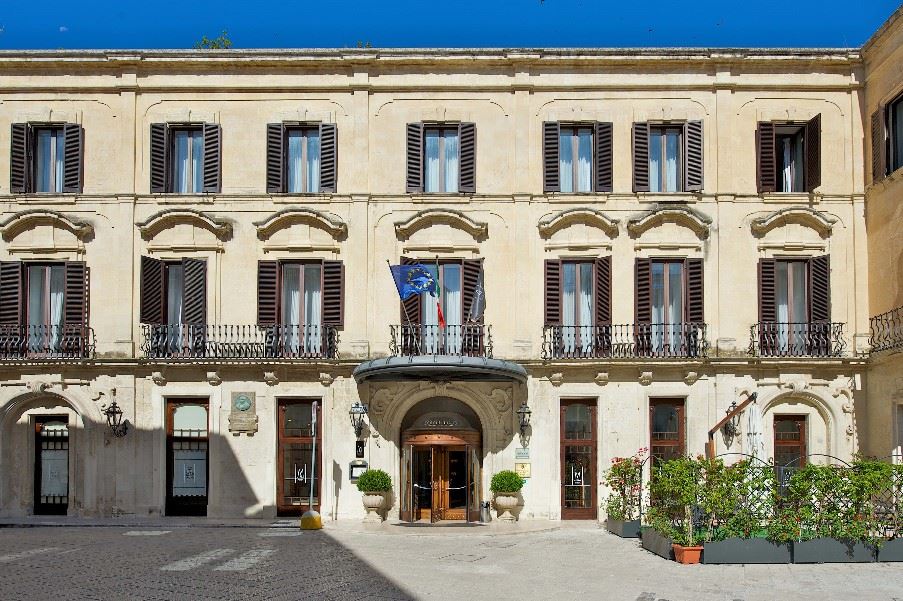 Today you will have a half day guided walking tour of Lecce. Affectionately known as the ‘Florence of the South’ due to its many Baroque buildings, Lecce has a Roman amphitheatre, more than a hundred churches and palaces and several designer boutiques. The city’s heyday was when it was part of Spain in the 17th century and the noblemen, merchants and religious orders of the city competed with each other as to who could build the most palaces. Carved from the local golden sandstone, the exuberant architecture looks like a sumptuous theatrical set. Afternoon at leisure. 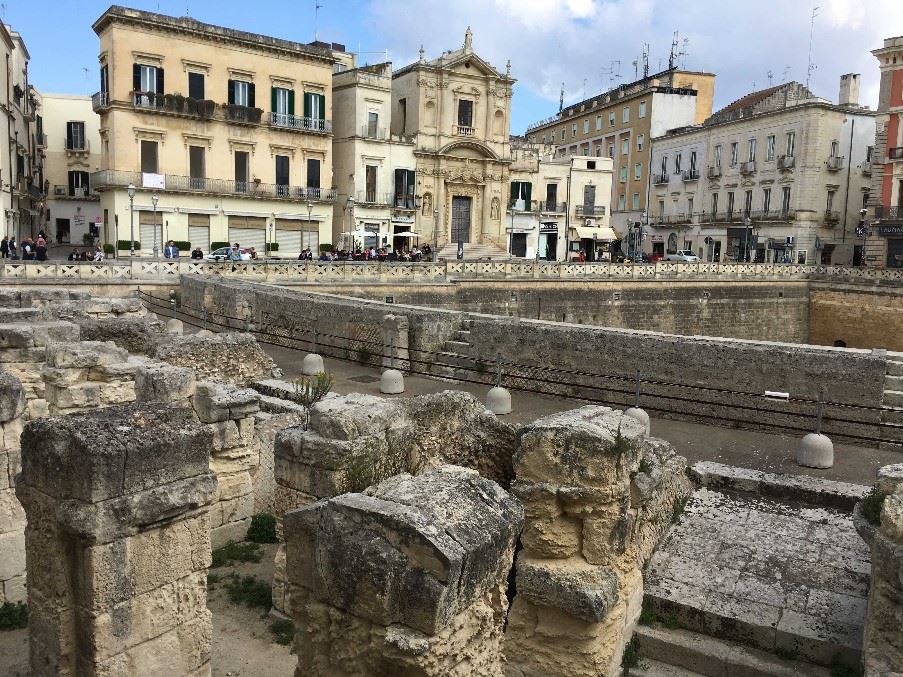 After breakfast, depart Lecce for Matera (c.2 hours drive), a UNESCO World Heritage Site and nominated as the Capital of Culture for 2019. The town centre, the oldest part of town, was built on the edge of a bare plateau where a high rocky mount looms over the spot where a valley descends to the long deep river-ravine. This is where you will find the cathedral and the typical Italian town centre. As time passed, the rocky valley slopes below the town were dug out to create caves, used for housing, storage and stabling. These cave areas, where the poorest local peasants lived, fill a narrow valley and run along the side of the gorge itself. Matera was used as a film location for Mel Gibson’s ‘The Passion of Christ’. Your afternoon guided tour of Matera will introduce you to the town, its cave-dwelling area known as the ‘Sassi’ and the Park of the Rupestrian Churches. There will be a visit to a cave, some 20 feet high and 100 feet deep, adorned with images of a dozen giant saints and angels emerging on the stone walls. Archangels Michael, Gabriel and Raphael float in the heavens, St Peter with St Andrew, the Virgin and Child in the company of two female saints. The most striking of all is a painting of Adam and Eve eating the apple that gives the cave its evocative name ‘the Crypt of Original Sin’. 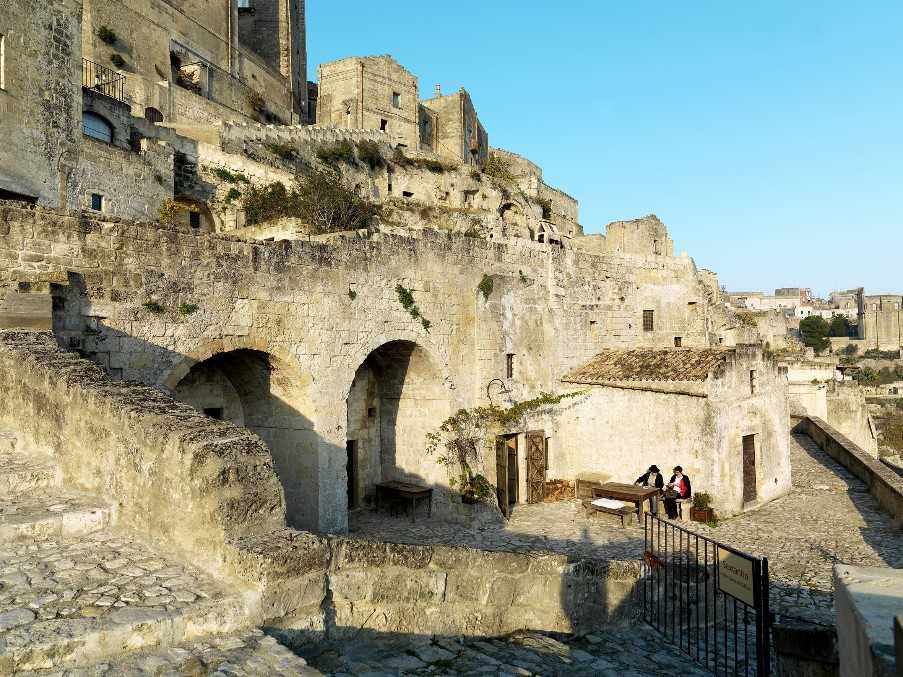 Morning departure from Matera to Sorrento (255km / c.3 hours 30 minutes) with a stop en route for lunch (not included) and a two hour guided visit of Pompeii (14:00) before continuing on to Sorrento. Pompeii was a thriving Roman city before it was buried in volcanic ash after the eruption of Mount Vesuvius in 79 A.D. The city remained frozen in time until it was discovered by a surveying engineer in 1748. Today the preserved site features excavated ruins of streets and houses that give visitors a real insight into the art, customs and trade of this early Roman settlement. 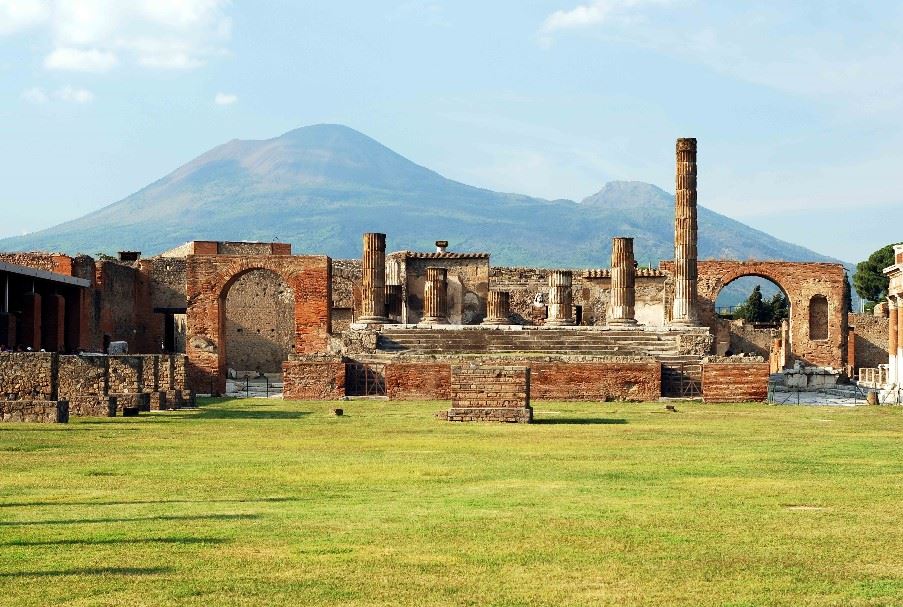 Explore, with your driver, the 40km coastline road winding its way from Sorrento through to Positano, the coast’s most picturesque and photogenic town with steeply-stacked houses tumbling down to the sea and lined with wisteria-draped balconies, smart restaurants and fashionable boutiques; Amalfi which lies at the mouth of a deep ravine, at the foot of Monte Cerreto, with its impressive Duomo and exquisite 13th century Cloister del Paradiso; and the enchanting town of Ravello, known for its annual music festival held within the celebrated Villa Rufolo Gardens, which is famed for being the inspiration for ‘Parsifal’, Richard Wagner’s last and possibly greatest opera. The annual Wagner opera festival takes place here between June and July. 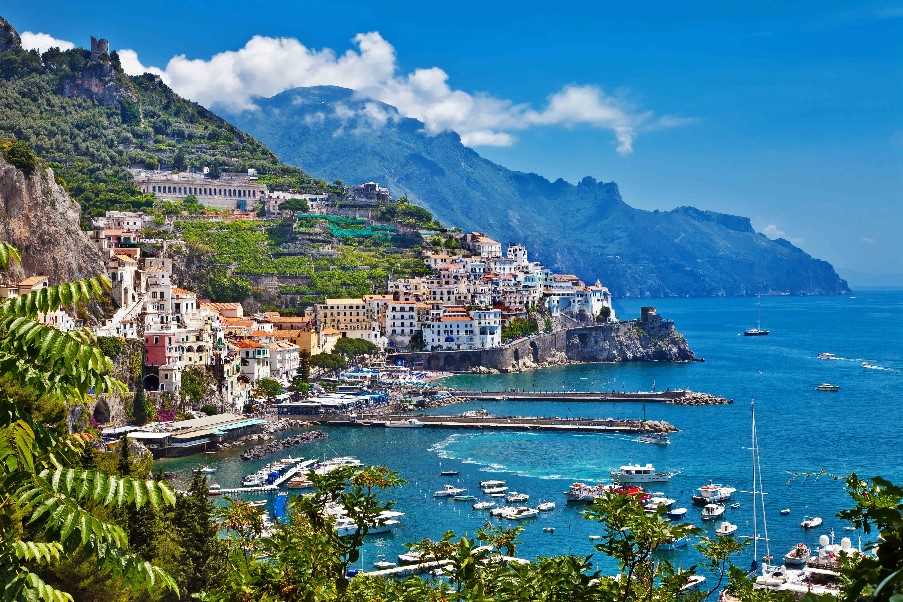 Day at leisure. Sorrento is an ideal base from which to reach many of the region’s greatest treasures including Naples, Herculaneum, Mount Vesuvius and the island of Capri. Excursions can be arranged and paid for locally. 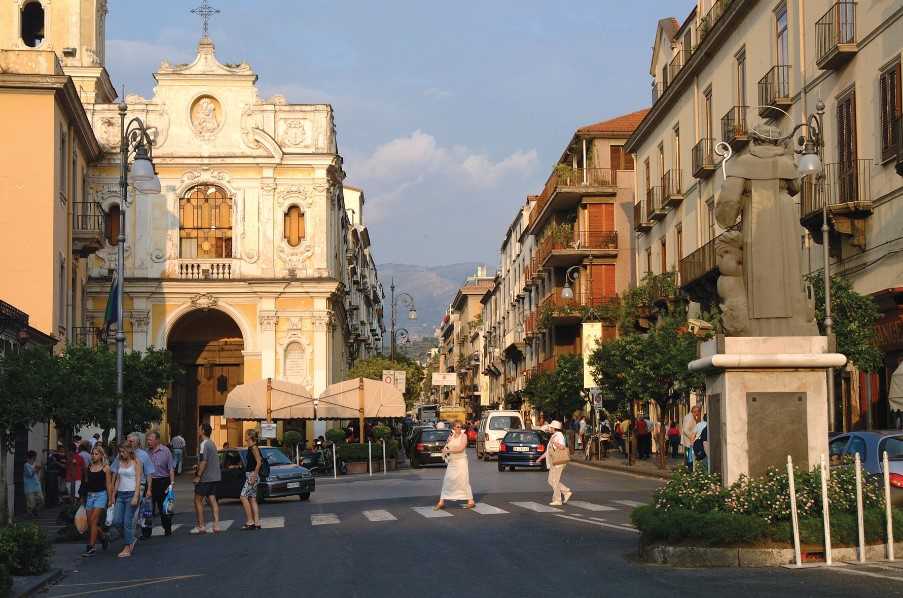 Transfer to Naples airport for your flight back to the UK.

The Grand Hotel Olimpo is located in the UNESCO World heritage town of Alberobello, famed for its ‘Trulli houses’ – ancient, whitewashed dwellings with a distinct cone-shaped roof.

The Grand Hotel Olimpo is located in the UNESCO World heritage town of Alberobello, famed for its ‘Trulli houses’ – ancient, whitewashed dwellings with a distinct cone-shaped roof. This well-situated property provides an ideal base for visiting the region from Bari to the Murge and the Salento landscapes with their charming hamlets, fortified cities, beautiful coastal towns, landscapes of olive groves, orchards and vineyards and rolling hills of rare beauty. The comfortable guest rooms, elegant suites, refined restaurant and roof garden make for an unforgettable stay.

The Patria Palace is a prestigious hotel housed in a fabulous 17th century palazzo in the heart of Lecce – dubbed the ‘Florence of the South’.

The Patria Palace is a prestigious hotel housed in a fabulous 17th century palazzo in the heart of Lecce – dubbed the ‘Florence of the South’. This historical building, overlooking the fabulously ornate Baroque façade of the Basilica of Santa Croce, is located in a small square close to all the important monuments of the city.

The buildings, mostly Baroque in style, flourished in the city due to the abundant supply of local stone ‘pietra di Lecce’, a pliable, white material which artisans could easily carve. The hotel still retains some of its original features including vaulted ceilings and carved balconies. The bedrooms, each with original decorative paintings, offer comfortable lodgings with modern facilities.

A unique hotel built into the pre-historic caves of Sassi which form part of the UNESCO World Heritage Site.

A unique hotel built into the pre-historic caves of Sassi which form part of the UNESCO World Heritage Site. The hotel took ten years to be converted from its former Sassi (stone settlement) to the remarkable boutique hotel it is today. The rooms are beautifully crafted using the natural features of archways, vaulted ceilings and stone flooring to provide comfortable and unique accommodation. The restaurant is set within an ancient 13th century church with stunning views over the town of Matera.

Explore the ancient churches, cathedrals and museums, steep winding alleyways with a wide selection of restaurants, cafes and bars.