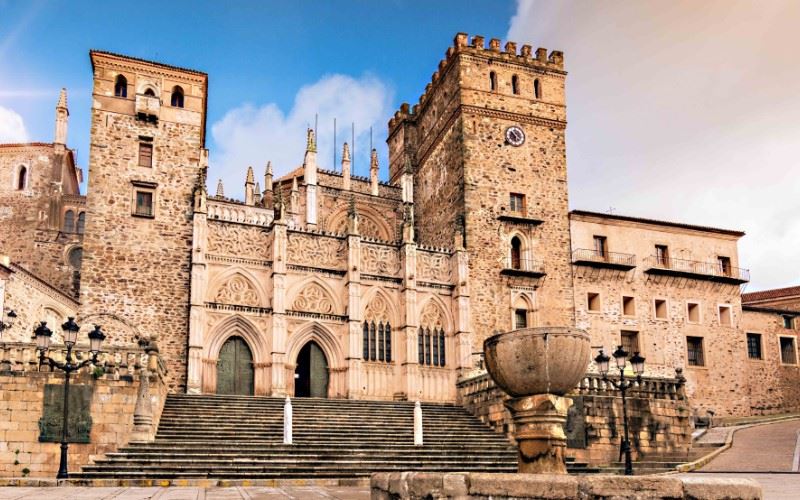 Exploring The Alentejo in Portugal and Extremadura in Spain

This fly drive explores two of the most fascinating and undiscovered regions of Portugal and Spain.  If you like castles, chivalry, noble buildings and the chance to sample tasty local cuisine and wonderful wines then you could not imagine a more perfect combination of destinations. Roman, Moorish, Medieval, Renaissance and Baroque architecture all fuse within some of the most picturesque towns and villages and UNESCO World Heritage Sites abound.

Note: It is possible to amend the accommodation in Caceres to stay at the Beholiday Santiago Apartments, for those guests looking for a self catering option.

If you are travelling in the spring you will find the fields awash with colour. Accommodation will be at the 4 star hotel M’Ar de Ar Muralhas Hotel within the city walls. Evora is a UNESCO World Heritage site in its entirety and is easily explored on foot. Take a walk through the narrow cobbled streets, wander through the squares, peak into the churches and stop at one of the many cafes for refreshment. You will find a huge variety of articles made from cork - even umbrellas. The Alentejo is the foremost region in the world for cork production and you will see the trees everywhere. 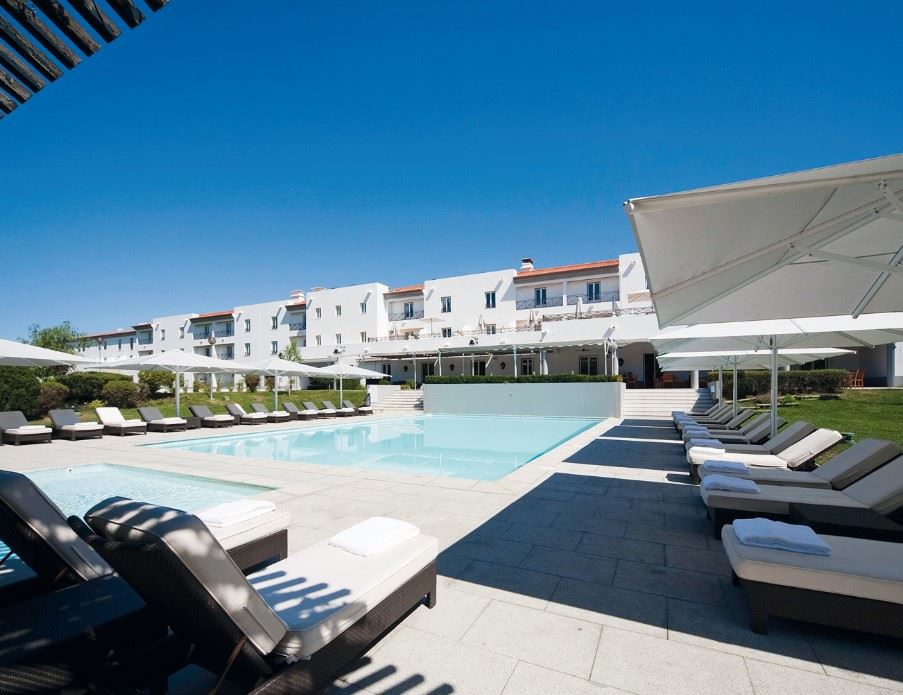 There are two locations that you should visit today, so make an early start! One is the village of Monsaraz (54 km, 50 mins)and the other the town of Estremoz (47 km, 36 mins). Both are topped by mighty medieval castles. Both these border castles were built as a defense against attacks from Spain, whose border is only a few kilometres from each castle. Make sure you stop for tea or a drink in the Pousada of Estremoz which is a magnificent palace. Alqueva lake, which is below Monsaraz is the largest manmade lake in Europe. If time allows, then a visit to the famous carpet making town of Arraiolos (23 km, 23 mins) from Evora on the way to Estremoz is well worth undertaking. 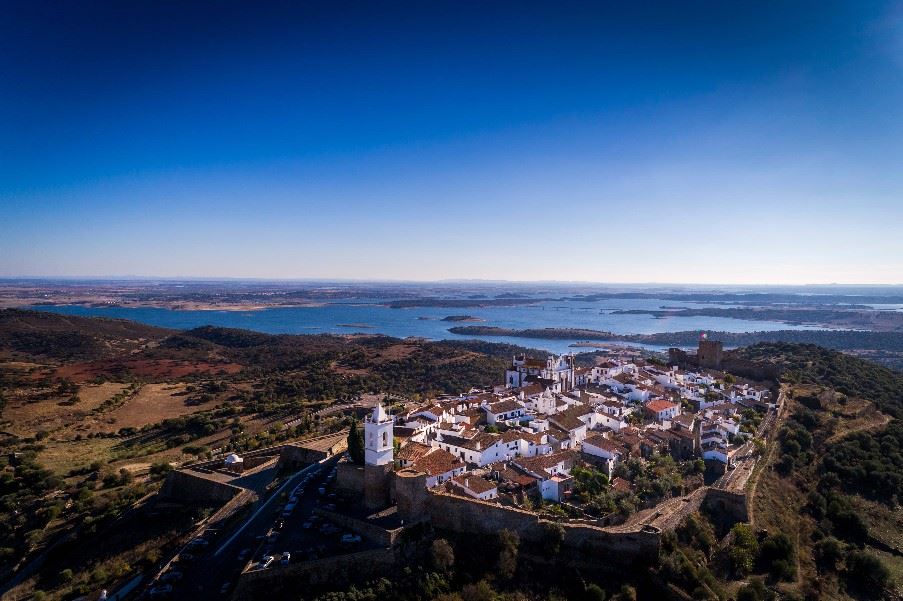 After breakfast take the short drive to Elvas (86.5 km, 60 mins). Elvas, a small city with a 17,000 population is virtually on the border with Spain and was the garrison town that defended the Portuguese from any Spanish incursion. The town is spectacular, from the stunning, mid sixteenth century Neoclassical 4 arch Aqueduct of Armoreira to the hilltop Moorish Castle. The old city still stands completely within the fortified walls and is a maze of winding streets. The fortifications here have been declared a UNESCO World Heritage monument.

Overnight at the Hotel Santa Luzia. 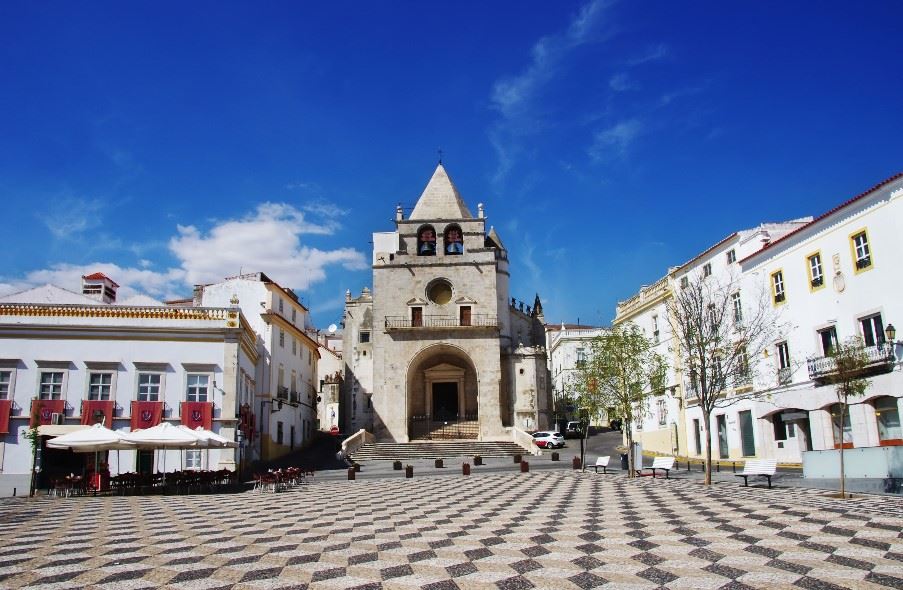 The drive from Elvas across the border into Spain and onto Caceres will take 1 hour 30 mins (109 km). But, make an early start because it really is worth stopping at the Adega Mayor Winery and Coffee Science Museum (Ciencia do Cafe) for a few hours which is 30 km (33 mins) north of Elvas and on your way to the Spanish border. Rui Nabeiro started life as a legendary smuggler of coffee across the border to Spain in the days of Salazar and Franco, dictators of Portugal And Spain. At that time the populations on both side of the border were starving and desperate people somehow had to put bread on the table. His association with coffee led him to create his own brand, DELTA coffee in 1961. Delta now controls 38% of the Portuguese market and is one of the biggest players in Europe. The interactive, ultra modern facility he has created next to his enormous processing plant is entertaining and follows the history of coffee from bean to cup. It is fascinating for adults and children alike. But he did not stop there. He had a vision of creating the most modern winery in Europe. Production began in 2002 and by 2007 the Adega Mayor was housed in a unique building designed by the famous Portuguese architect Alvaro Siza Vieira. Production is now at a million bottles a year. Both the Adega and the Coffee Museum can be visited in a combined tour and the experience should not be missed. The nearby town of Campo Maior owes everything to this visionary and he virtually employs the whole population. At 86 he still works every day in the family business he has created and is one of the most respected men in Portugal. Caceres, a 16th century medieval city with a current population of around 100,000 is stunning and once you have arrived you will be anxious to walk the cobbled streets, marvel and the beautiful buildings. Declared a UNESCO World Heritage Site in 1986, the city was founded by the Romans in 25 BC. Caceres is a film set and the main square which dates from the 12th century is one of the largest and most picturesque in Spain. 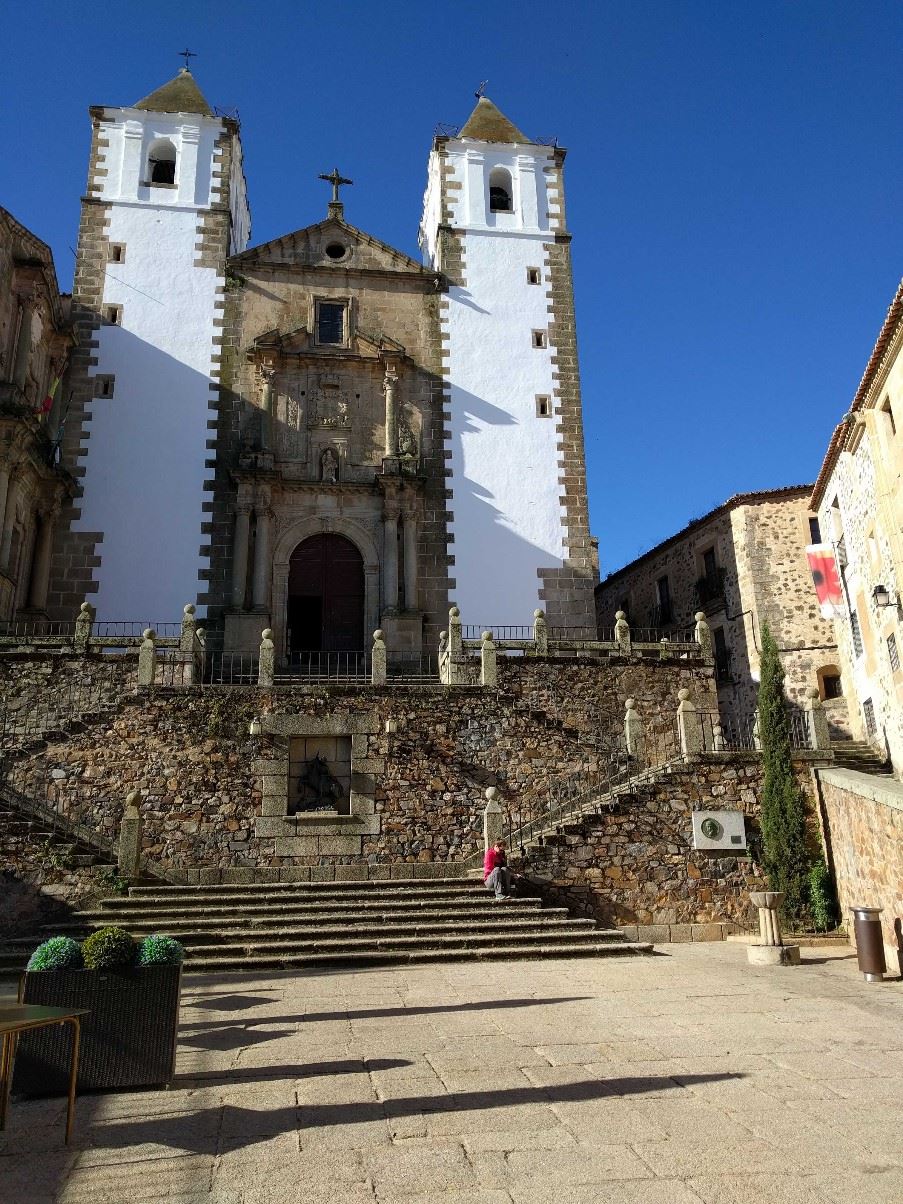 You have two full days in which to explore Trujillo (45 km from Caceres),Guadalupe (77 km from Trujillo), Plasencia (124 km from Guadalupe) and Jarandilla de la Vera (50 km from Plasencia). All are no more than an hour and 30 mins drive , east, north and northeast of Caceres. All are medieval towns and Trujillo and the Monastery of Santa Maria in Guadalupe are UNESCO World Heritage Sites. 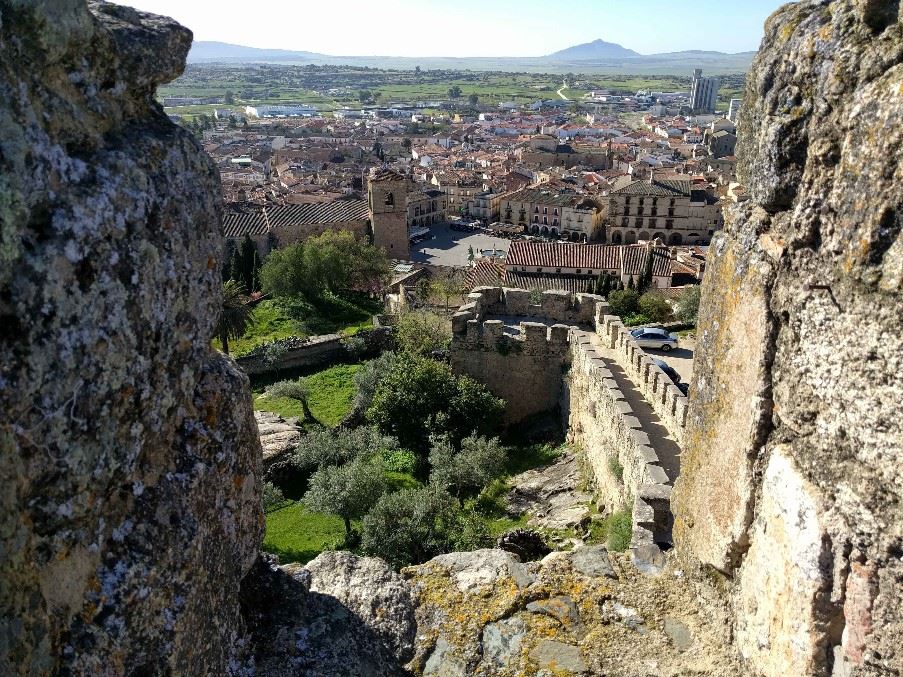 Another early start, as you have to visit the World Heritage Site of Merida (74 km 55 mins), to see the Longest Roman bridge in Europe which is still in use, the Roman Theatre, the Circus Maximus and the so called arch of Trajan built in honour of the Emperor Augustus. The National Roman Art Museum which opened in 1986 is a world class museum. It will be early afternoon by the time you have finished visiting Merida and it is a further 242 km (2 hours 30 mins) to Beja for your final night in the magnificent Pousada de Beja. Originally built in in 1268 this was originally a Franciscan Monastery and is centrally located in the city of Beja. There are many cobbled streets and local shops to explore in Beja. Make sure you have booked an evening flight from Faro as you can spend the morning of your last day to further explore the city. 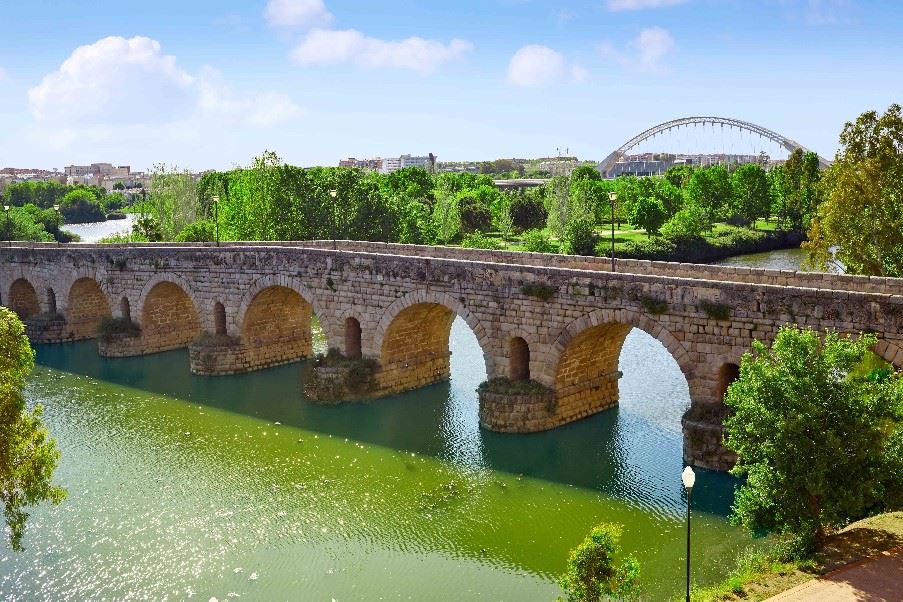 Return to Faro Airport, a drive of one and half hours (148 km) to return your car and catch your homeward flight to Gatwick.

This charming hotel is located within the ancient 14th century city walls of Évora, a UNESCO World Heritage site.

This charming hotel is located within the ancient 14th century city walls of Évora, a UNESCO World Heritage site.

The hotel has been beautifully decorated in a modern simple style, employing vibrant colours to create an inviting atmosphere of warmth and comfort. Novel objets d’art adorn the walls, adding further to the charm of the hotel by reflecting the rural life of the Alentejo region.

The restaurant serves traditional Alentejo cuisine with a good choice of Portuguese wines to complement any dish.

The Santa Luzia hotel was the first pousada built in Portugal in 1942.  At that time it only had six rooms.  It was in the Pousada’s restaurant that the now classic ‘Golden Codfish’ dish was created which is now recognised as one of the very typical Alentejo dishes.

The Santa Luzia hotel was the first pousada built in Portugal in 1942.  At that time it only had six rooms.  It was in the Pousada’s restaurant that the now classic ‘Golden Codfish’ dish was created which is now recognised as one of the very typical Alentejo dishes.

The new Santa Luzia is a smart, contemporary hotel with 25 rooms and very good restaurant in keeping with the old traditions. It is very well located within 2,000 square metres of gardens and only a 6 minute walk to the city walls and the centre of Elvas. For those who want to explore Elvas on foot yet maintain a ‘country feel’ about their accommodation then this is the place to be. An elegant and sophisticated hotel.

A very elegant hotel, ideally located in San Juan II square, 200 metres from the main Square (Plaza Major), the ancient wall that surrounds the old town and the shopping and business areas of Cáceres.

A very elegant hotel, ideally located in San Juan II square, 200 metres from the main Square (Plaza Major), the ancient wall that surrounds the old town and the shopping and business areas of Cáceres.

The building dates from the 16th century, with much granite and ancient stone in evidence.  Meticulously restored but with state of the art amenities, the Palacio still keeps the magic and atmosphere of the original stately home of the Marquises of Oquendo.

Though a hotel of 86 bedrooms, the Palacio does not feel like a large hotel. It has an intimate feel.  Decoration is with pastel colours to match the golden stone colour of the colonnade around the inner courtyard/atrium and the pale hardwood floors.  Several rooms have views over the square and both the restaurant and bar have terraces with a view to the square below and from which one can view the storks that seemingly nest in the most precarious locations.

This impressive Pousada, originally built in 1268, was a Franciscan monastery and is centrally located in the city of Beja.

This impressive Pousada, originally built in 1268, was a Franciscan monastery and is centrally located in the city of Beja. Today, after major repair and restoration, the Pousada Convento de Beja provides comfortable lodgings in a splendid centuries-old structure which still retains its former chapter house and cloister dating back to the 1300’s.