Villages of Pelion region - A guest blog by Rebecca Hall

Greece is more than an island destination. Here we take a look at the traditional villages of the Pelion region of the mainland.

Pelion is a mountain with an elevation of 5,328 ft (1,624m) in the southeastern region of Thessaly, forming a peninsular with several unique and traditional villages to explore. It’s 203 miles from Athens and a 4-5 hour drive, but only 134 miles/2.5 hours from the northern city of Thessaloniki. The region actually has its own airport – Volos – and is a good base for exploring this region and peninsula. 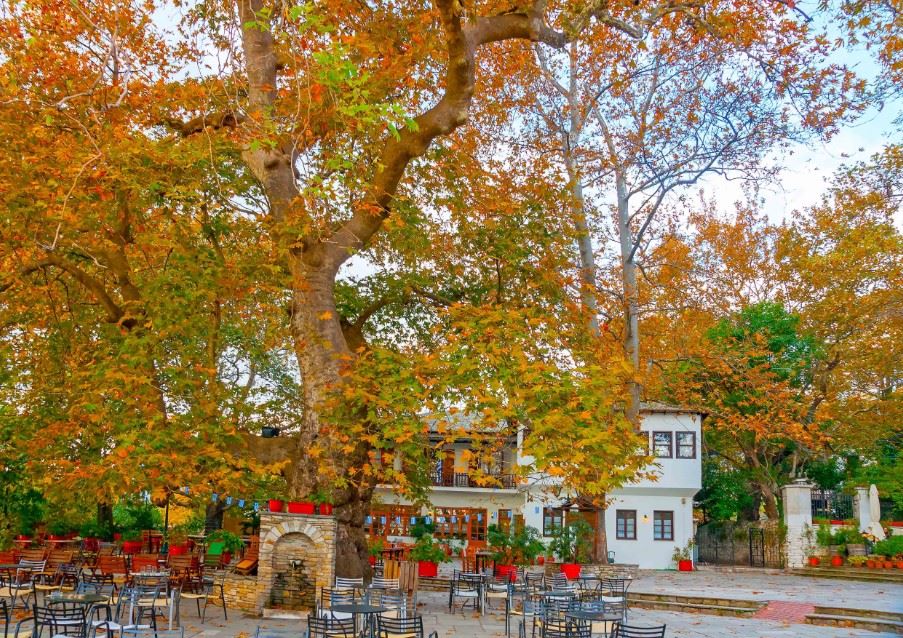 Zagora, the biggest village of the region, is where silk used to be produced and until the 18th century was a big trading area. With its tiny square and picturesque church, it’s a lovely village to wander around, and their small library houses thousands of rare manuscripts.  The houses are still made in the style of the Greek 17th and 18th century folk architecture of the time and the first school of the region was founded here in the 17th century.

The Church of the Archangels is the highlight of slightly larger Millies village.  Restored in 1741 you’ll see the impressive bell tower looming outside and ancient frescos within.  Built amphitheatrically over the slopes of Mount Dikri, Milies means apple trees and yes, you’ve guessed correctly, many such trees adorn the area. It’s possible to reach Millies by small traditional train.

Ano Lechonia is a place right out of E. Nesbit's famous book, then film, The Railway Children.  The vintage style train station here houses the "Pelion Train" whose operation started over a century ago between the town of Volos and the village of Lechonia, extending onto Milies (above) in 1903.   It's still in operation and runs for 18 miles (29km) over lush landscapes and many bridges.

One of the more touristy villages to visit, but still not to be missed, is Makrinista.  Wandering around its cobbled lanes and stopping to marvel at the lion's fountain in the village square, the ancient plane trees and the houses with traditional slate roofs, it's easy to see why it's an attraction.  It's also understandable why it's nicknamed the 'Balcony of Mount Pelion' when you look at the view stretching all the way down to the coast.

Founded and developed in 1500, Tsagarada attracts many tourists during the summertime due to its location, nestled amongst chestnut forest.  You’ll find old churches here that house ancient wooden carvings of the icons, and the main characteristics that you’ll note as you wander around are the traditional mansion style houses with large flowery gardens, and in the centre of the square of the village – Agia Paraskevi – sits a 1000 year old plane tree; the perfect place to sit and take in the views around you.

Are you into skiing? It’s possible to ski in Pelion and you’ll find a ski centre located in Agriolefkes, sitting at over 3,900 ft (1200 m) in height.  With a total of 7 miles (12 km) of ski runs and a ski school, plus views all the way down to the sea, it's a fabulous opportunity to take part in an activity you wouldn't normally equate with Greece.

Moving down to the coast now, and the fishing village of Afissos, approximately 16 miles from Volos, has sandy secluded and organised beaches and tavernas gracing its waterfront.  There’s rumour that Jason and the Argonauts stopped here for supplies before their long voyage to Colhis.  Either way, Afissos makes a wonderful seaside alternative from the villages in the mountains.

Hiking is a popular activity in Pelion and with the proper guide or map; it’s possible to hike between most of the villages in the region.  With hikes ranging from different levels of difficulty and possible year round, just remember that Pelion is mountainous, so snow is found here well into the springtime.

Hiking, skiing, traditional villages, beaches – Pelion has it all.  It’s a mainland region that offers visitors year round activities and attractions and one you should definitely put on your list to visit.