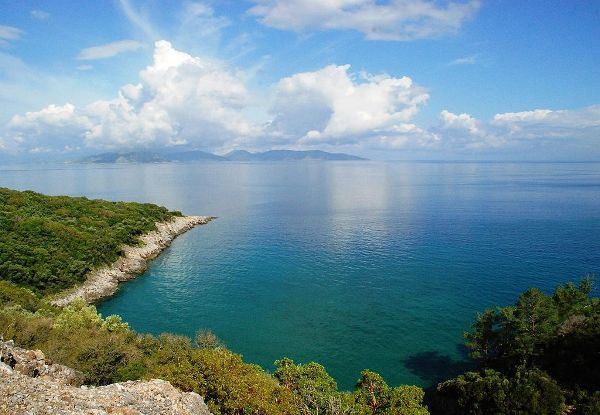 It’s only a 30-minute ride away from the bustling city of Kusadasi by dolmus (the informal Turkish public minibus service), but the tranquillity of Dilek National Park will feel like as though it’s a world away. The national park covers an area of forest and secluded coastline, and local people have long come to the park to enjoy a picnic at one of the many bays and beaches. As the only properly sandy beach within the park, Içmeler Beach is particularly popular with families.

But the great attraction of Dilek National Park to visitors staying in and around Kusadasi is its unspoilt natural wonders. The coastline is dotted with canyons and caves, and the area is well know for its great hikes. A popular canyon trail runs for over 20 km down to the coast. Be warned that it’s easy to get lost within the park, and those doing anything more adventurous than one of the few signposted trails should consider hiring a local guide.

The Cave of Zeus is one of the park’s top attractions. This clear pool of fresh water is a popular place to stop for a dip to freshen up after a day on the beach. While the name implies a link to Greek mythology, another local legend suggests that the pool was also a bathing spot for the Virgin Mary, who is thought to have spent her latter years nearby in Ephesus.

Wild boar are a relatively common site within the park, and whether you’re hiking or just relaxing on the beach, it’s not unusual to bump into a family of pigs also enjoying the beautiful surroundings. These cute animals are so used to humans that they will follow them in the hope of getting a few scraps of food, and are not averse to eating straight from the hand if given the opportunity. Sea turtles and monk seals are often spotted along the coast, and there’s a rich diversity of bird life within the park’s dense forests. To the south of the Dilek Peninsula is an area of wetland known as the Büyük Menderes Delta, where the Menderes river’s fresh water mixes with salt water, and the landscape is dotted by a series of lagoons and marshes. Visitors can see over 200 species of birds, including the Dalmatian pelican, the flamingo and pygmy cormorant.

The woodland and canyons of Dilek National Park may not be the biggest draw for visitors coming to this part of western Turkey, but it’s certainly worth taking a break from the bustle of Kusadasi to sample this wild and easily accessible corner of Turkey.