Dating from between 100 – 800AD the Moche civilization is defined by its significant archaeological sites and some of the most impressive pottery to be found in Peru. The cultural sphere was centred on several valleys on the north coast of Peru and takes its’ name from the river that flows past the city of Trujillo.

Through the countless pieces of pottery found at these sites historians have been given a real insight into the culture of this ancient society. The ceramics reflect all aspects of their daily lives and many were modelled into lifelike representations of the people, crops, animals and marine life.

Some scenes on the pottery depict high ranking dignitaries, priests and warriors in fine clothing and jewellery. There is pottery depicting punishment including mutilation and death. Other ceramics and precious artifacts show a highly developed society where musical instruments were played, skilled weaving techniques were used and also where gold, silver and copper were crafted into fine ornaments. 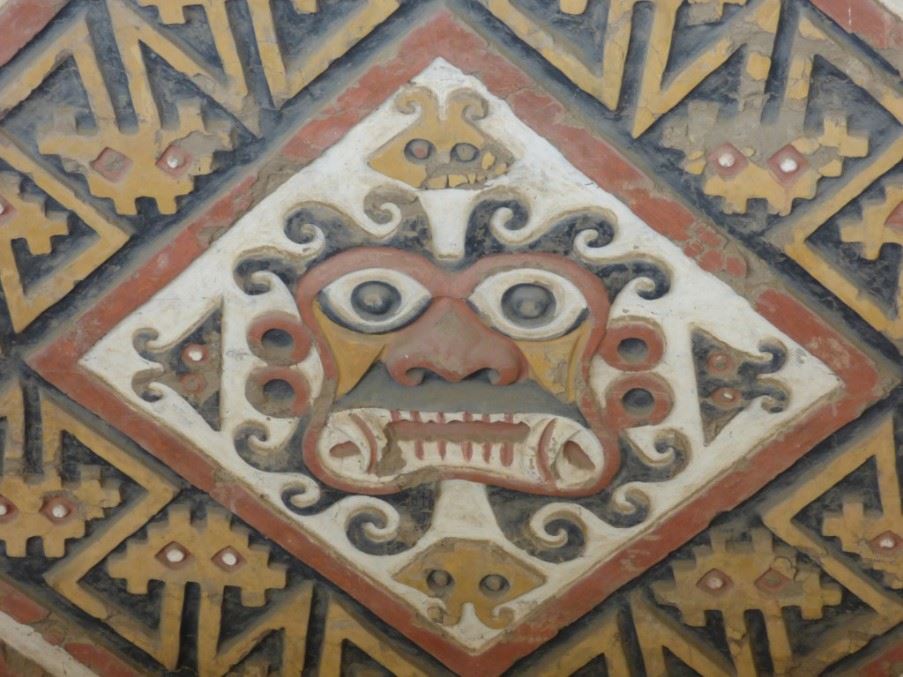 The Lord of Sipan

The most significant Moche archaeological sites are temples or holy places (Huaca) and within these were buried the most important people from their society. Huaca Rajada, located 20 miles east of Chiclayo, was initially discovered by grave robbers (huaqueros) from the local village of Sipan. However, when a local archaeologist (Dr Walter Alva) became aware of a large influx of precious objects flooding the market in early 1987, he realised that something special had been found. With a team of experts he quickly located the partially looted site and fortunately discovered several untouched tombs, one of which turned out to be the most impressive Moche tomb found to date.

The Lord of Sipan (as he has now become known) was a Moche ruler of some importance and he was buried in all of his finery. The jewellery and ornaments found with the body were made of gold, silver, copper and semi-precious stones. These included, headdresses, a face mask, a pectoral (breast plate), necklaces, nose rings, ear rings and other items, indicating that he was of the highest rank.

One of the more unusual facts about this burial were the number of people and animals who were also interred with him. These included a warrior guard whose feet had been amputated to stop him leaving once they arrived in the afterworld, three young woman (perhaps his concubines), two assistants, a servant and a child (to lead the way in to the next world). In addition, there was a dog and two llamas.

In order to display (and protect) the amazing artifacts found, the impressive Museum of the Royal Tombs of Sipán has been built in the nearby city of Lambayeque and it is here you admire the staggering amount of objects found and craftsmanship that went into making some of the individual items. 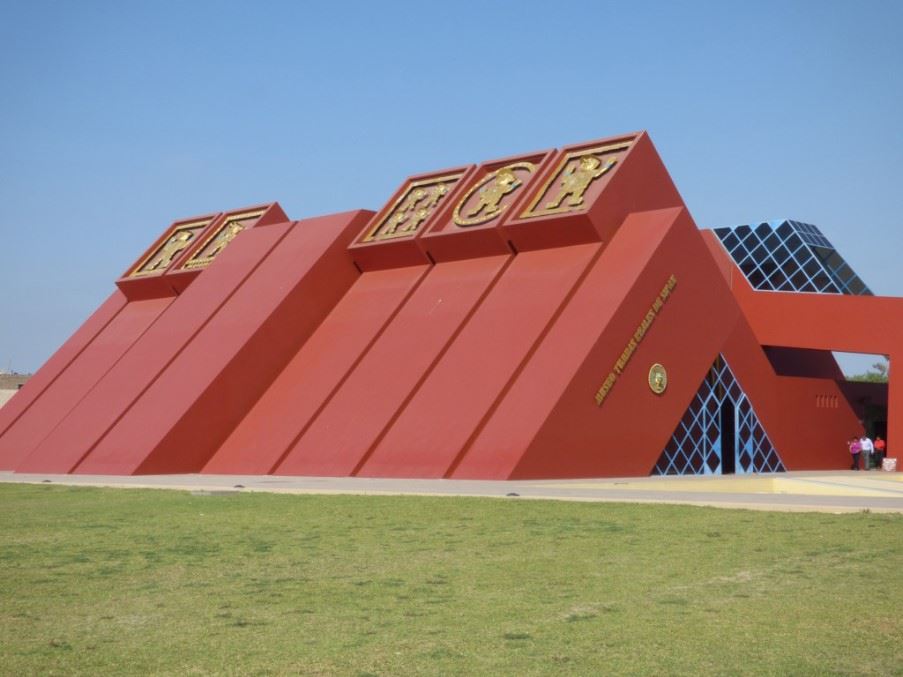 There are many other important Moche archaeological sites but Huacas del Sol y de la Luna are interesting because of the ceramics, precious metals and beautiful polychrome friezes found there. The two Huacas (both roughly pyramidal in shape) are located on the Rio Moche about 7 miles southeast of Trujillo. Huaca del Sol was once the largest pre-Columbian structure in Peru, but at least one third has now been eroded away. It is estimated that 140 million adobe bricks were used to built the Huaca and many of them still bear the hallmarks of the workers who made them.

Huaca de la Luna is smaller than Huaca del Sol but is more interesting because archaeologists discovered rooms full of ceramics and precious artifacts. It also has some impressive polychrome friezes. A new museum has recently been built on the site and this houses the most important artifacts found. 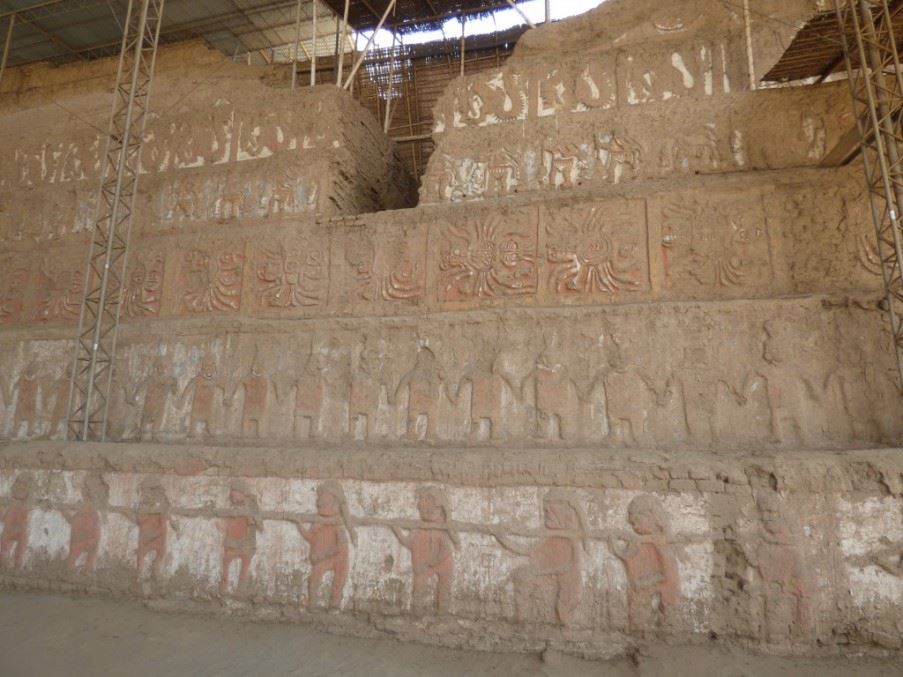 There are regular flights from Lima to Trujillo and Chiclayo and journey times are an hour and an hour and a half respectively. It takes four hours to drive from Trujillo to Chiclayo and there are some interesting Moche sites worth visiting en-route.

Sunvil can offer accommodation in both Trujillo and Chiclayo and recommend 2 nights in each in order to allow time to visit the most important sites. 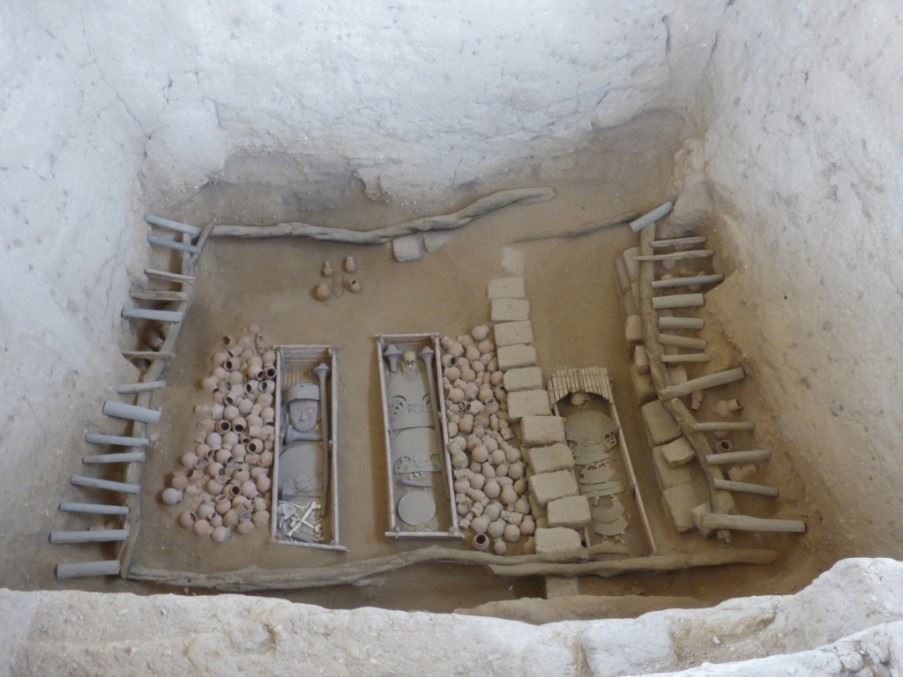