Robert E Fuller is a British artist best known for his wildlife paintings. His high-detailed images have been purchased by clients such as the RSPCA and the National Trust, and have been exhibited in wildlife galleries across Europe and in his own gallery in North Yorkshire.

Robert recently travelled to the Galapagos Islands to paint the unique wildlife of the region and we interviewed him to find out more about his unforgettable experience.

Thank you for agreeing to answer a few questions for us about your experiences on the Galapagos. To begin with, could you let us know a little about yourself and why you were drawn to the Galapagos Islands for your work?

As a wildlife artist I’m fascinated by wild creatures and, like all people interested in nature, a trip to the Galapagos Islands was a lifelong ambition. It was a chance to see species that don’t exist anywhere else in the world and to get up close to these unique creatures. A dream come true.

Did you conduct any research on the islands prior to departure? If so, how did you go about that?

I did. I was particularly interested in Darwin’s connections with the archipelago and how the islands and the wildlife that led Darwin to make his ground-breaking evolutionary theories have changed since his visit in 1835. What I discovered, however, was even more interesting. As an artist when I began to look through the material written about Darwin’s voyage, I was naturally drawn to the illustrations of the species that Darwin had encountered and I began to wonder if he had drawn them himself.

I contacted the director of Darwin Online, an online resource encompassing all of Darwin’s work, who told me that Darwin was actually hopeless at drawing and his sketches of the island constituted of a few wobbly lines in pencil.

This got me interested in who had drawn the first images of the Galapagos and its wildlife. It turned out that there had originally been an official artist on the voyage, but that a lack of funds had meant he was made redundant before the ship reached the Galapagos. And in any case Conrad Marten, a landscape artist, did not value the wildlife he encountered – to the extent that Darwin had to stop him cooking and eating a rare Patagonian rhea bird. It turned out that the beautiful illustrations that had caught my eye in Darwin’s publications were actually drawn by artists in the UK long after his return from the Galapagos. 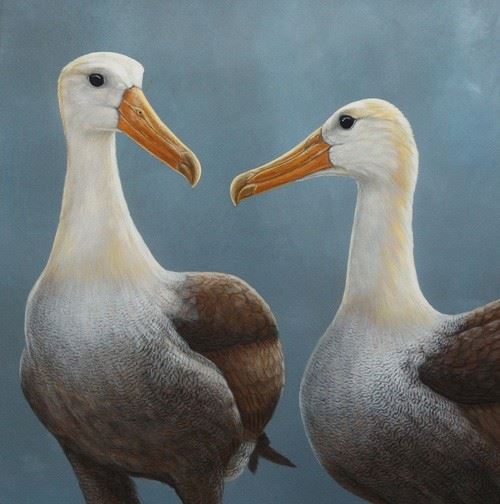 How would you describe your style of photography/painting and how did the Galapagos provide opportunities for your work?

My painting style is very detailed. I like to record every hair and scale and to capture the individual character of each animal or bird. My compositions are like portraits, in which I position my subject in the foreground with either a flat or minimal background behind. I use photographs to paint from. Working in the Galapagos was ideal for me because I was able to get so close each subject and get to know it well enough to be able to translate its unique character in paint.
Penguins 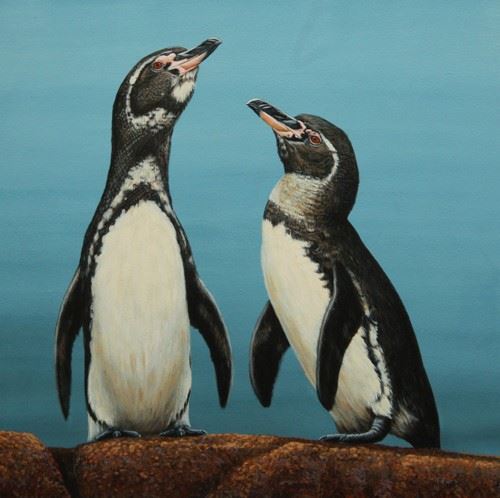 Did you encounter any difficulties or challenges whilst there?

I found the heat a challenge. I like to spend a long time crouching or lying on the ground in order to photograph a species at eye-level and this was quite hard work under the harsh sun. On one occasion I was sprawled in the grass photographing a giant tortoise and I got stung by fire ants!

What would you say is your favourite image that you created in the Galapagos? Why have you chosen that one?

My portrait of saddle-backed giant tortoise, Super Diego, is my favourite. This 133 years old tortoise is thought to be solely responsible for bringing the Espanola tortoise back from the brink of extinction, after fathering an estimated 1,700 young. Everybody has heard of Lonesome George, whose death in 2012 rendered his subspecies extinct, but we really ought to be celebrating Diego who has done so much more to ensure the survival of his kind.
Super Diego, Giant Tortoise 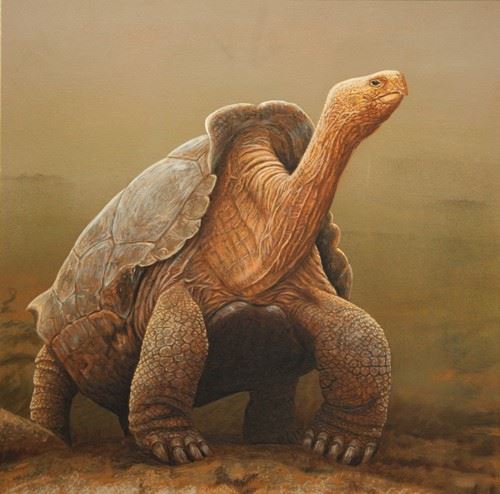 Do you have a favourite wildlife species on the islands?

It is very hard to choose but if I had to I would pick waved albatross. I visited Espanola during the breeding season and was privileged to watch the powerful intimacy between courting pairs. Espanola hosts the only breeding colony of waved albatross in the world. These huge birds are so ungainly on land and watching them try to take off and land really made me laugh. But it was the way in which pairs rubbed their bills together, making an odd ‘clacking’ sound, during courtship that was the most endearing to me.

What do you see as the major environmental threats to these islands?

Whilst I was there I noticed a very tangible tension between local farmers and the need to protect wildlife. Although most of the islands’ inhabitants have come to value their unique wildlife and have opened up their land to tourists wanting to see the more glamorous species, I watched a farmer throwing stones at a short eared owl because he said the owl had been taking his chickens. These tensions exist all over the world, but it is nevertheless important to the future of wildlife in Galapagos if the islanders can appreciate the value all of its species.
Robert with a Giant Toroise 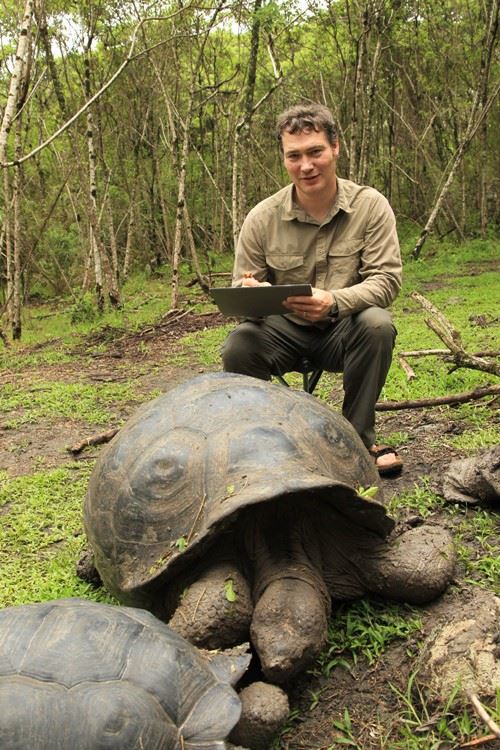 In your opinion, is there anything more that can be done to ensure the Galapagos are there for future generations?

This year the Galapagos Conservation Trust has launched a programme to teach children in schools all over the world – including the children living in the Galapagos – about the unique species living on the islands and the conservation projects taking place to protect them. I think this is one of the most positive moves to ensure the island’s species are protected for the future.

Out of the 19 islands did you have a particular favourite?

No. I loved them all. Each one was so unique. It is impossible to choose.
Birds 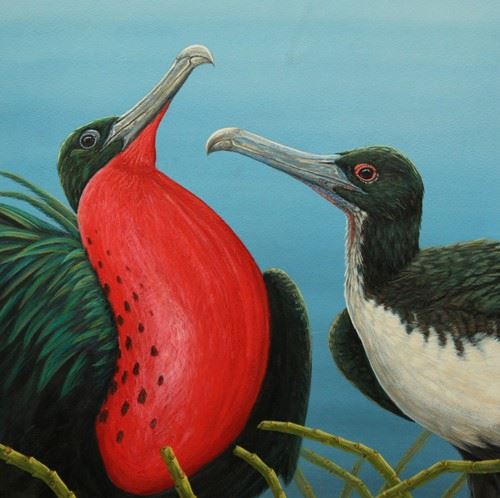 As a traveller to the Galapagos what would you prefer a land based stay or cruise?

A cruise. If you are on a boat you usually move in the night to the island you are going to visit the following day. This means you leave the boat at first light, which is the golden hour for photography. It’s much better than staying at a hotel and having to travel to each island before you can begin your day.

Any major disappointments during your time on the islands?

No. None at all. It was so memorable I can’t wait to go again.
Robert with Iguanas 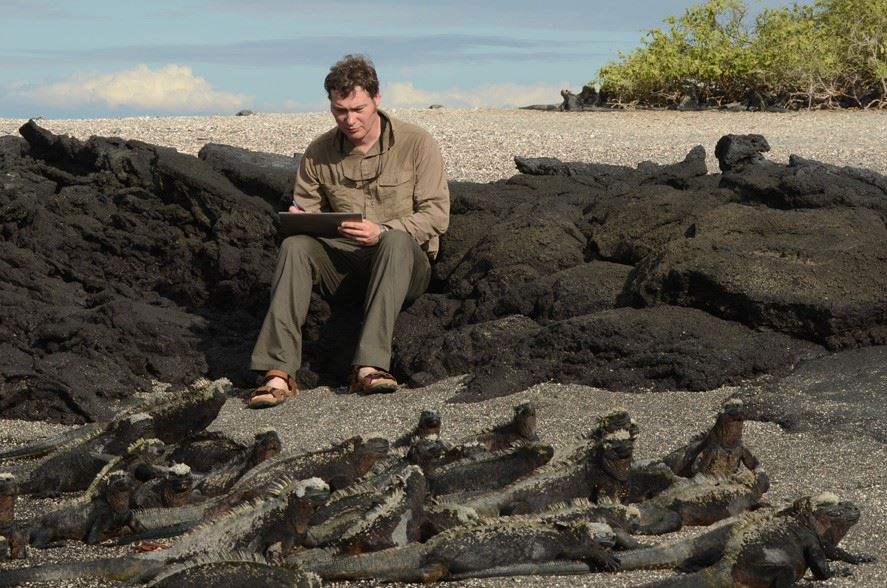