It’s been a permanent fixture in the centre of Copenhagen for over 170 years – in fact, Tivoli Gardens is said to be the world’s second-oldest amusement park (the oldest is also in Denmark), and the world’s most-visited seasonal theme park (it is closed for the winter). In its time it offered the most modern and scariest rides for thrill seekers, and while the park is still kept up to date with new attractions, many of its visitors are drawn to its unashamed celebration of nostalgia.

The oldest and most famous ride within Tivoli Gardens is the Rutschebanen, built in 1914 and now the world’s oldest surviving wooden rollercoaster – it’s so old that it requires a brake man on board to slow the cars down as they thunder down the tracks.  A host of famous names have visited the park since it first opened. Hans Christian Andersen was apparently a regular at Tivoli, and the park even inspired Walt Disney in his plans of world domination. When he came to Tivoli on a trip with his wife, he decided that Disneyland should try to copy the special atmosphere he had experienced in Copenhagen.

Over the years, the attractions which have been added to Tivoli have been designed to remain in keeping with the surrounding structures and the gardens; if you visit at night, the gardens are lit by many thousands of twinkling, colourful lights, all designed to maintain the fairytale atmosphere for which the park is known.

But there’s much more to Tivoli than just rollercoasters.  You can see the Tivoli Boys’ Guard – a traditional Danish marching band with costumes that look more than a little bit like those of London’s Beefeater guards. Other regular performances include the Pantomime Theatre, performed in a Chinese-inspired setting but featuring Italian comedy productions. There’s no dialogue, which of course works very well with what is usually an international audience.  As well as the shows, there’s are regular firework displays during the summer season. If you want to follow the example of many Danish families, you can bring a picnic to eat within the gardens; otherwise there’s an eclectic mix of Danish and international food on sale in the park stalls.

While Tivoli Gardens operates every day between April and September, the park is also open for special occasions during the darker months. In the run-up to Halloween the gardens are lit up by  pumpkins and lanterns, and visitors are met by dozens of witches. By mid-November the park is transformed again by the traditional Christmas market, considered one of the finest in Scandinavia with a wide variety of hot food and drinks, as well as unusual Christmas gifts on sale. The rides operate as normal during these seasonal openings, and there are spectacular fireworks displays during the Christmas and New Year celebrations.

You can include a visit to Tivoli Gardens in a 4-night itinerary with Sunvil Discovery – A short break in Malmo and Copenhagen. 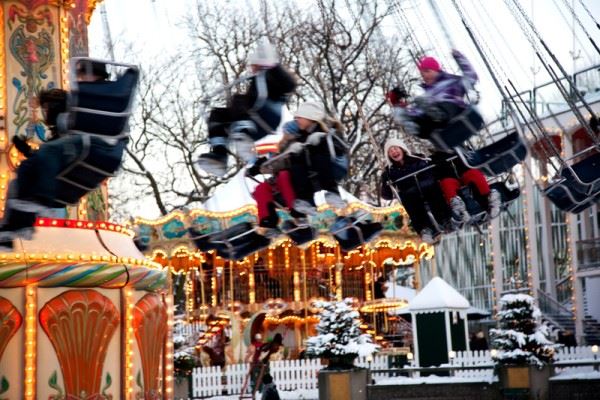 Dot com or dot con? Don’t be a victim of holiday fraud The Queen’s 90th Birthday: A Royal Visit All for the love of travel | Looking forward All for the love of travel | Our 50th birthday Booking a holiday IS legal Green means go. Amber means...? Read more inside
Tips for travelling post-lockdown The Coronavirus | The latest news and advice Holiday inspiration from the specialists at Sunvil To Scandinavia in search of crime Where to go on holiday in October Travel to and within Europe from 01Jan21 5 day trips from Copenhagen The Coronavirus | Denmark Highlights of Copenhagen