The largest swamp on the planet

The Pantanal is located right in the heart of the South American continent. The bulkof the area is in Brazil, but the Pantanal is so large that it also stretches into Paraguay and Bolivia. At a staggering 200,000Km2, the Pantanal is about the same size as Spain and large enough to be a country itself. Yet very few people have everheard of this gigantic wildlife area, and even less have visited it.

What’s it all about?

The Pantanal can be thought of as a colossally sized basin that fills up every year (from October to May); as floodwater rushes in from rain and meltwater from surrounding mountain ranges. The result, is a vast network of permanent rivers and lakes that, for half the year, also flood onto huge grassy open plains. These grasslands, therefore, spend half their life as dry savannah and the other half as marshland. When you also then factor in the searing heat (the mercury is usually around the 35oC mark), clearly life is tough; and so only the most adaptable and hardy species can survive here.

It might therefore come as a surprise to hear that this is one of the most biodiverse areas on the continent – so those that can survive here are clearly well rewarded. There is actually an unexpected variety of habitats, an abundance of food and certainly no shortage of fresh water or living space.

How does it compare to other safari areas?

I’ve been incredibly lucky to have had the opportunity to travel extensively throughout Africa as part of my previous job, so my initial instinct was to compare the two. After all, there are several areas in Africa that have similar environments, such as: the Selous Game Reserve (Tanzania) and Lower Zambezi National Park (Zambia), which are also located on large rivers; the Serengeti National Park (Tanzania), which is known for its huge grass plains; and the Okavango Delta (Botswana, which is the next largest seasonal wetland (after the Pantanal). These areas in Africa are renowned for their high concentrations of mega fauna: elephant, giraffe, buffalo, wildebeest and hippo; just to name a few. A huge draw for visitors here is also the opportunity to see big cats, such as: lion, leopard and cheetah. The Pantanal cannot compete in terms of large mammal; but, in fairness, not many wildlife areas outside of Africa can. I soon learned that the flora and fauna in South America is so unique that it is wrong to compare the two and it deserves to be judged on its own merit.

For this reason, the Amazon actually makes for a far better comparison, and lots of wildlife enthusiasts travelling around Brazil will include both areas in their itinerary. I haven’t visited the Amazon yet (I’m due to get there in a couple of months’ time), but from speaking to people who have visited both areas, I understand that it is far easier to see wildlife in the Pantanal, due to the open nature of the landscape.
We stayed just three nights at the Pousada Rio Mutum Pantanal Eco Lodge, and even in such a short space of time we saw some fascinating species - none of which I had seen before – which included tapir; capybara; caiman; pampas deer; a giant ant-eater; an armadillo and giant otters. There is also always a chance of seeing jaguar, puma and ocelot; but these species are very illusive and guests that come here should not come expecting to see them. 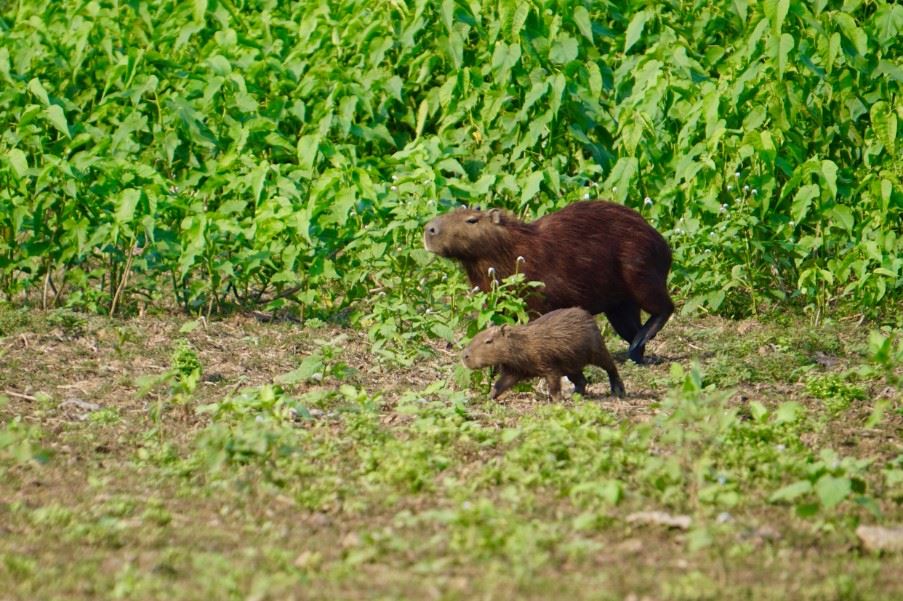 The Pantanal has over 250 different types of fish, including three species of thenotorious piranha. Which can be caught here year-round, with the exception of thebeginning of the wet season when they are breeding. But, with more than 600 species, the main attraction to the Pantanal has got to be its birdwatching opportunities. I don’t think that I have ever been anywhere where it is so easy to see such a variety - you can easily count a 100 species in a single day. Even if you wouldn’t classify yourself as a birdwatcher, it is hard not to be captivated by the brightly colored macaws, parrots and toucans. 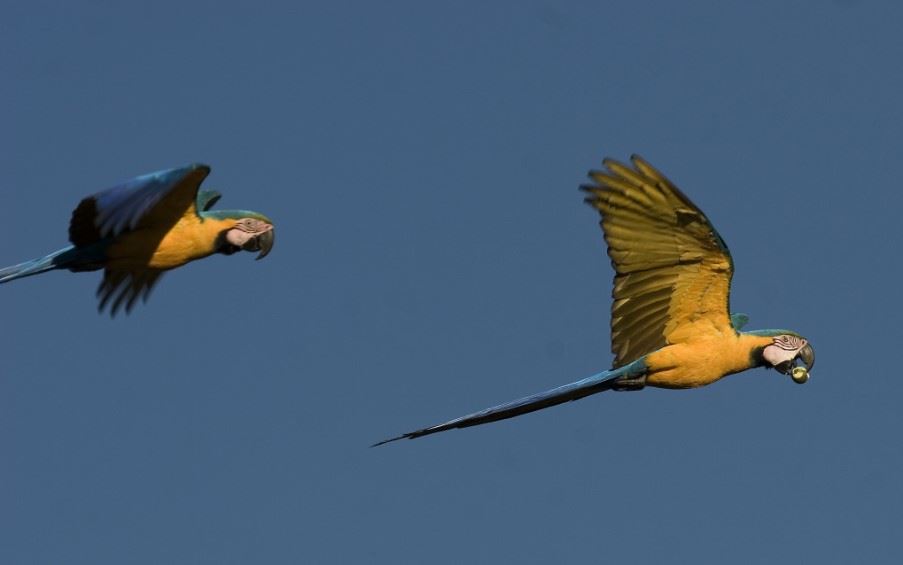 So, if you come to the Pantanal expecting to see huge herds of antelope, or frequentbig cat sightings, you are going to be disappointed. But the Pantanal more than makes up for this with its variety of birds, unusual fish and unique animals. Virtually everything that we saw was a first for me and it gave me the same rush as going out on my first ever game drive in Africa.

Challenges
Sadly, like most wildlife areas these days, life in the Pantanal is under threat. Inefficient, unsustainable and irresponsible farming practices have had a huge impact on the ecosystem. Vast areas of forest, in the surrounding areas, have been cleared to make space for cattle farming and the production of soybean crops (which are then primarily used for animal feed!).
On a surface level, deforestation obviously causes habitat loss and forces animals to live and compete in smaller areas, but there are also many other knock-on effects to the ecosystem. Trees and vegetation slow the flow of water and act as filters; when they are removed, floodwater travels faster, which erodes more soil. This has caused soil degradation and more silt to run into the rivers and lakes. As the water becomes less transparent, predators find it harder to find their prey and fish struggle to find a mate.
Poisonous insecticides and fertilizers used on the farms, also get washed into the rivers, which affects the health of the water system and the animals that live there. And this is all before you consider the negative impact deforestation and farming has on climate change!
Things don’t look like improving anytime soon either. The minister for the environment also happens to be the owner of the second largest soybean farm in the country! Talk about a conflict of interests.

It’s not all doom and gloom though

Despite these external pressures, the Pantanal still seems to be flourishing. It’s worth bearing in mind the scale of the area and whilst there is a great deal of farming on its periphery, the Pantanal itself is protected. The fact that it floods every year may well prove to be its saving grace because it makes settlement and farming undesirable. Our guide, who had been working in the area for the past decade, seemed positive that populations of key indicator species are actually on the increase (piranha, caiman, jaguar and primates). As long as people continue to visit this remarkable area, and eco-tourism continues to place an emphasis on the importance of the ecosystem and its wildlife, then there is definitely hope. 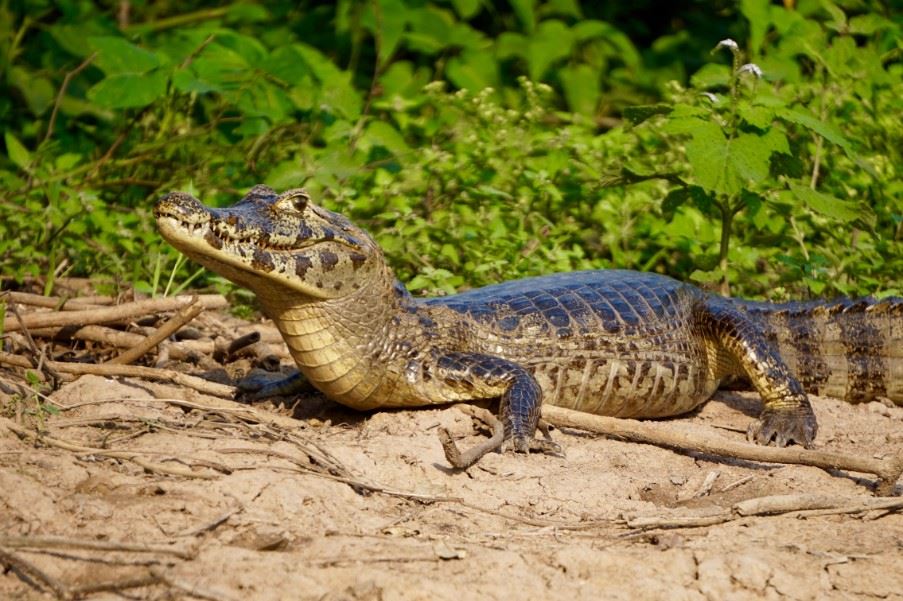 Where to go on holiday in April The Queen’s 90th Birthday: A Royal Visit Notes From the Field - Brazil The Coronavirus | Airports Notes from the field – Brazil, Argentina & Uruguay Petropolis and a breath of fresh air
Where to go on holiday in March Five unreal places in South America you have to visit 7 things to know when planning a visit to Iguazu Falls January 2016 Sunvil Supper Club – Moqueca (Brazilian Seafood Casserole) Spotlight on Wildlife: Jaguar Celebrating Carnival in South America Brazil off the beaten track – 5 great places you shouldn’t miss Notes from the field - Argentina, Brazil and Chile Jericoacoara and a fairytale sunset Iguacu Falls - picking sides Out to sea in a jangada – a traditional Brazilian fishing boat The Coronavirus | The latest news and advice Where to go on holiday in January Our practical guide to the Rio Carnival All for the love of travel | My most memorable trip - Noel Josephides A selection of the best beaches in Latin America James Bond and his adventures in Brazil Small-ship Amazon cruises Their race has finished, let your Latin America journey begin UNESCO World Heritage Sites in Latin America Wild encounters in Latin America The best 7 festivals in Latin America Booking a holiday IS legal Green means go. Amber means...? Read more inside