Out to sea in a jangada – a traditional Brazilian fishing boat 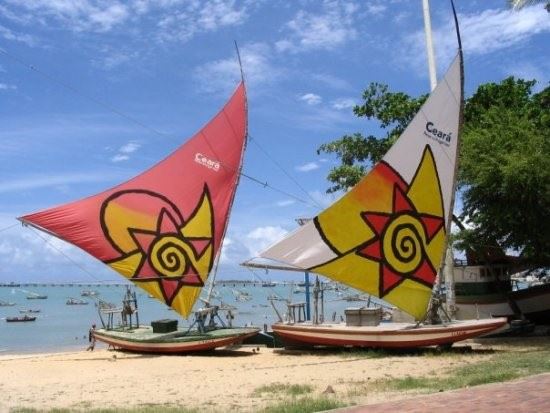 Visit the North East of Brazil and you’ll have the opportunity to sail in a jangada – a traditional fishing boat which has been used in the region for hundreds of years. In fact, for what appears to be a simple vessel, the jangada has a remarkable history. There are claims that the jangada dates back all the way to the time of Ulysees in Ancient Greece, although it’s more likely that the design (in its current form at least) owes much to another dominant seafaring era – that of Portuguese golden age of exploration in the 15th and 16th centuries.

The triangular sail allows the jangada to be pitched into a headwind, while the shallow hull allows it to be launched from a beach; these advantages made in the perfect vessel for the long stretches of the Brazilian coast where strong currents and shallow waters prevented the Portuguese from building harbours. In fact, while the Portuguese rulers managed to stamp their authority and destroy most of the Brazilian vessels which they didn’t control, the jangadas of the north east stayed largely out of their reach and they were quite likely used to smuggle gold and other goods out of the Brazil away from the eyes of the authorities.

Even in recent times, the jangadas and their sailors (jangadeiros) have held a special place in Brazilian folklore. The ill-fated film It’s All True was directed by Orson Welles, and includes a tribute to the jangadeiros who, in 1941, sailed from Fortaleza to Rio de Janeiro to make their case for financial help from the state. The 61-day journey, made without any navigational instruments, made them national heroes and secured a bill which granted jangadeiros access to basic support. Welles wasn’t quite as successful; his film ran out of money and remained unfinished, and 50 years later a second film was made: a documentary piecing together the calamities which derailed Welles’ production.

The craft of making jangadas, for many years a treasured skill in coastal communities in the north east of Brazil, has dwindled in recent generations to the point of almost dying out completely. The few that are produced have foregone the traditional form, using irregular pieces of wood as they are found, and now use industrially produced, uniform planks.  But all is not lost. New community initiatives are taking shape in the region and young people are being given work and essential training while preserving a craft which for several centuries was an essential part of life along this sparsely populated coast. A trip on a jangada today not only offers the chance to admire the secluded coastline and experience the ocean waves in a traditional vessel; it also helps support those who are passionate about keeping their maritime heritage alive.

The largest swamp on the planet Where to go on holiday in April The Queen’s 90th Birthday: A Royal Visit Notes From the Field - Brazil The Coronavirus | Airports Notes from the field – Brazil, Argentina & Uruguay
Petropolis and a breath of fresh air Where to go on holiday in March Five unreal places in South America you have to visit 7 things to know when planning a visit to Iguazu Falls January 2016 Sunvil Supper Club – Moqueca (Brazilian Seafood Casserole) Spotlight on Wildlife: Jaguar Celebrating Carnival in South America Brazil off the beaten track – 5 great places you shouldn’t miss Notes from the field - Argentina, Brazil and Chile Jericoacoara and a fairytale sunset Iguacu Falls - picking sides The Coronavirus | The latest news and advice Booking a holiday IS legal Green means go. Amber means...? Read more inside Where to go on holiday in January Our practical guide to the Rio Carnival All for the love of travel | My most memorable trip - Noel Josephides A selection of the best beaches in Latin America James Bond and his adventures in Brazil Small-ship Amazon cruises Their race has finished, let your Latin America journey begin UNESCO World Heritage Sites in Latin America Wild encounters in Latin America