Italy’s Basilicata region and the village of Maratea 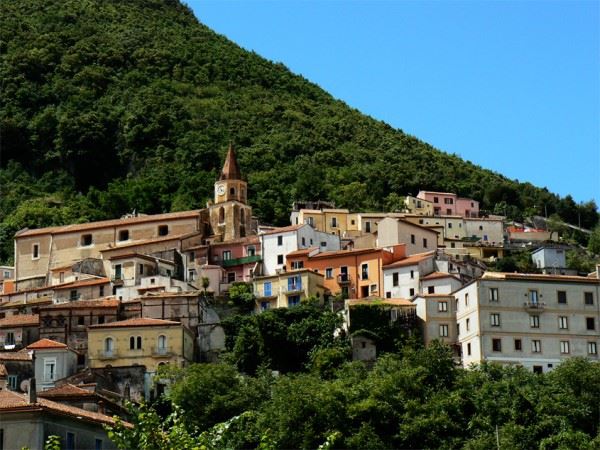 Basilicata is the instep of Italy’s boot, and while it doesn’t attract anywhere near the number of visitors of its northern neighbour Campania (home to the Amalfi Coast and Naples), it does offer plenty of attractions to those making the journey to this southern part of the country. One of its main draws is the charming town of Maratea, home to many beaches and one particularly impressive statue.

Maratea is the main town of the Basilicata region and sits close to the southern Tyrrhenian Sea coast; it’s around 3 hours’ drive south of Sorrento and Naples. It’s a higgledy-piggledy hilltown, with attractive old houses squeezed together along winding narrow lanes, and separated from the sea below by a strip of woodland. It’s the type of small Italian town that’s never likely to be over-run with tourists, but it offers those who do come a chance to slow down to the gentle pace of life so typical of rural southern Italy.

Despite a modest population of barely 5,000 inhabitants, Maratea boasts no fewer than 44 churches. Some have been better preserved than others, and some contain historical and cultural treasures whose importance is realised far beyond the local community. The Chiesetta del Calvario chapel is home to a fresco of the Madonna and saints, built into its façade and dating back to 1548. You can take a look at this and other frescoes within the chapel.

And while the pretty squares of Capri quite rightly attract the attention and admiration of thousands of daily visitors, the Piazza Buraglia in Maratea is an equally charming spot and makes a perfect place in which to have a coffee and watch the world go by. Another place to explore, just beyond the town proper, is the delightfully-named baroque-style Convento dei Cappuccini.  Here you’ll find an exhibition which displays Maratea’s quite considerable collection of archaeological findings.

Dominating Maratea is the Cristo Redentore (Christ the Redeemer) statue. At 22 metres, it is the world’s 5th-tallest statue of Jesus. With its outstretched arms the statue can be seen from far out at sea, and its construction in the 1960s was no doubt a major boost for what remains one of Italy’s poorer regions. The statue’s lofty position makes for a good, energetic hike from the town to its base, passing the remains of the town’s oldest district along the way. The views of the coast from the hilltop are spectacular.

The coast at the foot of Maratea offers around 20 beaches, mainly of black sand, for those wanting to make the most of the clear waters of the Tyrrhenian Sea. Maratea Porto is a pretty port village which has undergone recent development and has been smartened up, but it’s not difficult to look beyond the luxury yachts in the harbour and find the charm of this traditional harbour village.

Exploring the Aeolian Islands Dot com or dot con? Don’t be a victim of holiday fraud The Queen’s 90th Birthday: A Royal Visit Italy and the joy of gelato Sicilian Citrus Fruits Infographic Start of the 2018 holiday season
Exploring Puglia – along Italy’s heel A slice of island life on Lipari Where to go on holiday in September The Coronavirus | Airports Italy... what not to miss Highlights of Lazio EU referendum: What effect will the result have on your 2016 summer holiday? All for the love of travel | Looking forward Italy, you still make me smile! Highlights of Venice All for the love of travel | Our 50th birthday An Introduction to Sicily’s Baroque Cities Beating the colossal crowds at the Colosseum in Rome Spring forward to one of our many favourite destinations in 2018 April 2018 Supper Club - La Torta Sbrisolona Where to go on holiday in June Notes from the field – Puglia The Coronavirus | The latest news and advice Booking a holiday IS legal Visit Rome in 2016: The Holy Year of Mercy Green means go. Amber means...? Read more inside A day in Enna Tips for travelling post-lockdown Our 10 Best things to do in Florence, Italy Notes from the field - Veneto Highlights of Tuscany October 2016 Sunvil Supper Club – Fried Neopolitan Pizza Train travel in Italy Highlights of Rome Tailor-made holidays in Puglia Our Top 5 Natural Wonders Of Sicily Highlights of Veneto and the Italian Lakes Where to go on holiday in July Syracuse – Exploring the historic treasures of Sicily Holiday inspiration from the specialists at Sunvil Highlights of Puglia Exploring Maratea without a car Travel to and within Europe from 01Jan21 Highlights of Campania The Coronavirus | Italy and Sicily