Our 10 Best things to do in Florence, Italy

The list of what to see in Florence is immense.

From a garrison town built for Roman war veterans, Florence rose to become the hotbed of Renaissance creativity and one of the nerve centres from which modern Western Europe transformed itself after the Middle Ages. The city’s visual splendour stands as testimony to its momentous and colourful past. It’s museums, palaces, and churches house some of the greatest artistic treasures in the world. The most popular and important sites in Florence include the Cathedral, the Baptistery, the Uffizi, the Bargello, and the Accademia. The churches of Santa Croce and the Basilica of San Lorenzo are veritable art galleries. Wander some of the oldest streets in the city until you reach the Arno River, cross the Ponte Vecchio, and experience the “newest” area of Florence, the Oltrarno. When you grow weary of museums and monuments, head outdoors and spend a leisurely day at the Boboli Gardens.

Conde Nast Traveller recently published an article with their list of top sights and attractions and so we reached out to our team of Italy specialists to get their insight on the capital of Tuscany – considered by many to be a cultural, artistic and architectural gem.

To narrow our list down to 10 was quite a challenge, but it nevertheless reflects our years of expertise and knowledge, proving that there is something for everyone.

Head to the Mercato Nuovo, built around the middle of the 16th century in the heart of the city, and just a few steps from the Ponte Vecchio. Initially, it was intended for the sale of silk and luxury goods and then for the famous straw hats. The main attraction here is the Fontana del Porcellino, where tourists can be seen rubbing the nose of the Porcellino ‘little piglet’ for good luck. 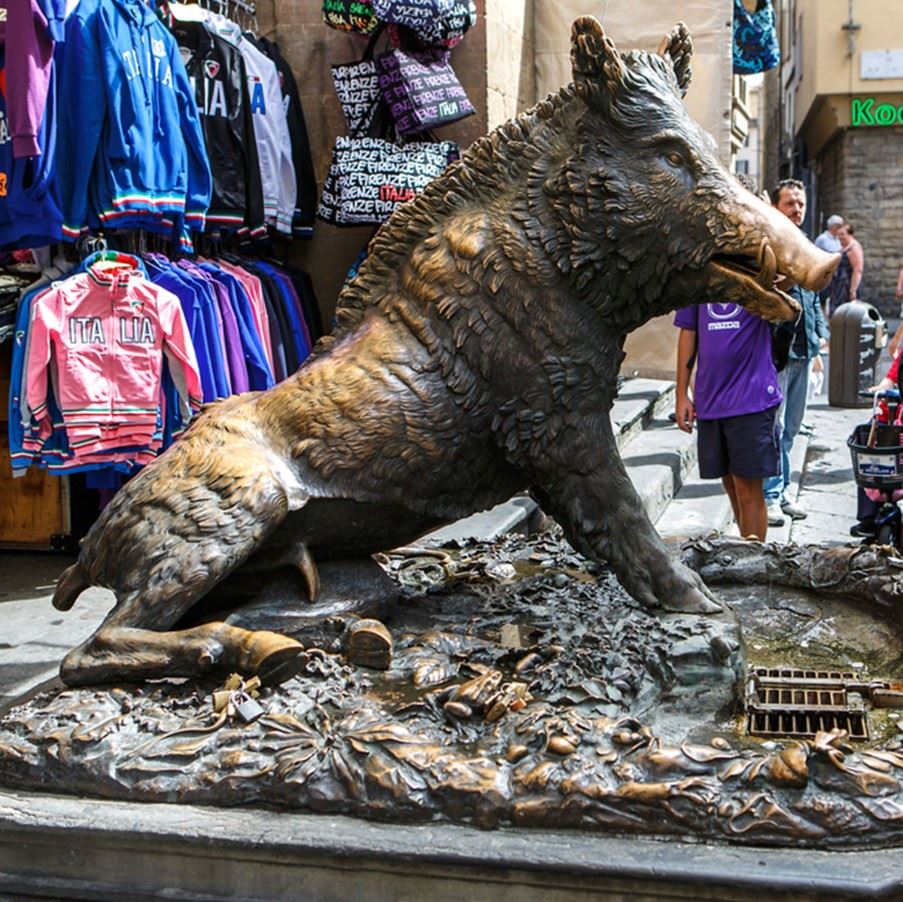 2. Marvel at the view from Piazzale Michelangelo

Designed in 1869 by Florentine architect Giuseppe Poggi, Piazzale Michelangelo in the Oltrarno district offers panoramic views of Florence and the Arno valley. Climb up from Piazza Poggi for a stunning view day or night, and best of all it is free!

View of Florence from the Piazzale Michelangelo 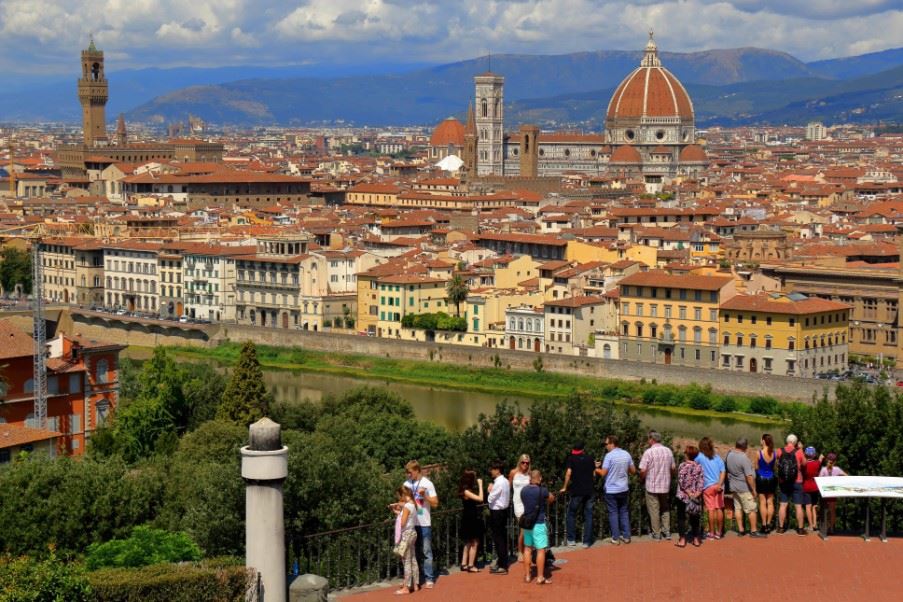 The National Museum at the Bargello is without a doubt one of the most important (and less crowded) museums in Florence. This former barracks and prison dating back to 1255, has a great art collection – Renaissance sculptures, including the famous marble statue of David by Donatello, as well as bronzes and metal works. During the summer months there are also music, dance and theatre events hosted within the inner courtyard. It’s worth noting that most museums are closed on Mondays!

Renaissance sculpture at the Bargello Museum 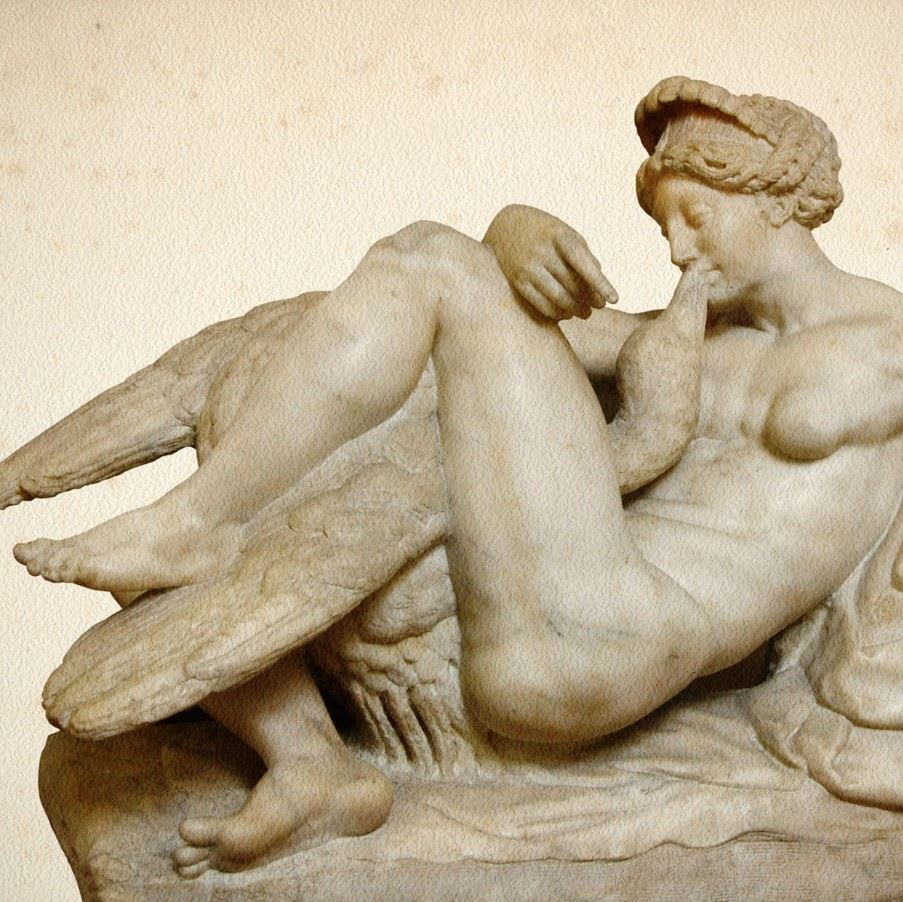 4. Walk through the Boboli Gardens

The Gardens, behind the Pitti Palace are some of the first and most familiar formal 16th-century Italian gardens. 11 acres of formal gardens with sweeping views, endless paths, elaborate fountains and grottoes make for an unforgettable adventure whilst the centuries-old oak trees offer shelter from the warm Florentine summer sun. Tickets to the gardens also include entrance to the Palatine Gallery. 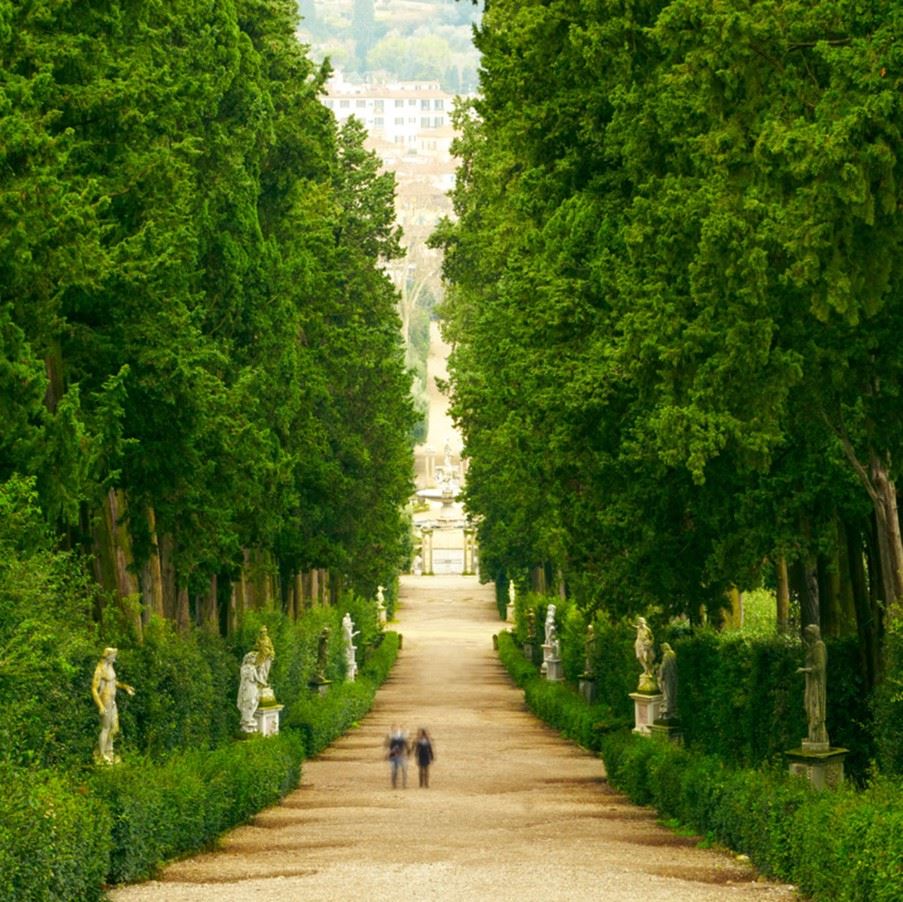 It goes without saying, but Italians love their coffee. Coffee houses in Italy are known as “bars” and most locals tend to frequent their favourite one almost every day. It’s where they come to discuss everything from sport to politics over a cappuccino – which traditionally Italians only drink before midday. Take some time out from your sightseeing and visit one of Florence’s many grand historic cafés on Piazza della Republica. If coffee’s not for you, then try the hot chocolate ‘cioccolato caldo’ at Paszkowski – simply delicious or as the Italians would say “delizioso”

Did you know – Cappuccino gets its name from the Capuchin friars known for their brown robes and ring of brown hair, just like the drink! 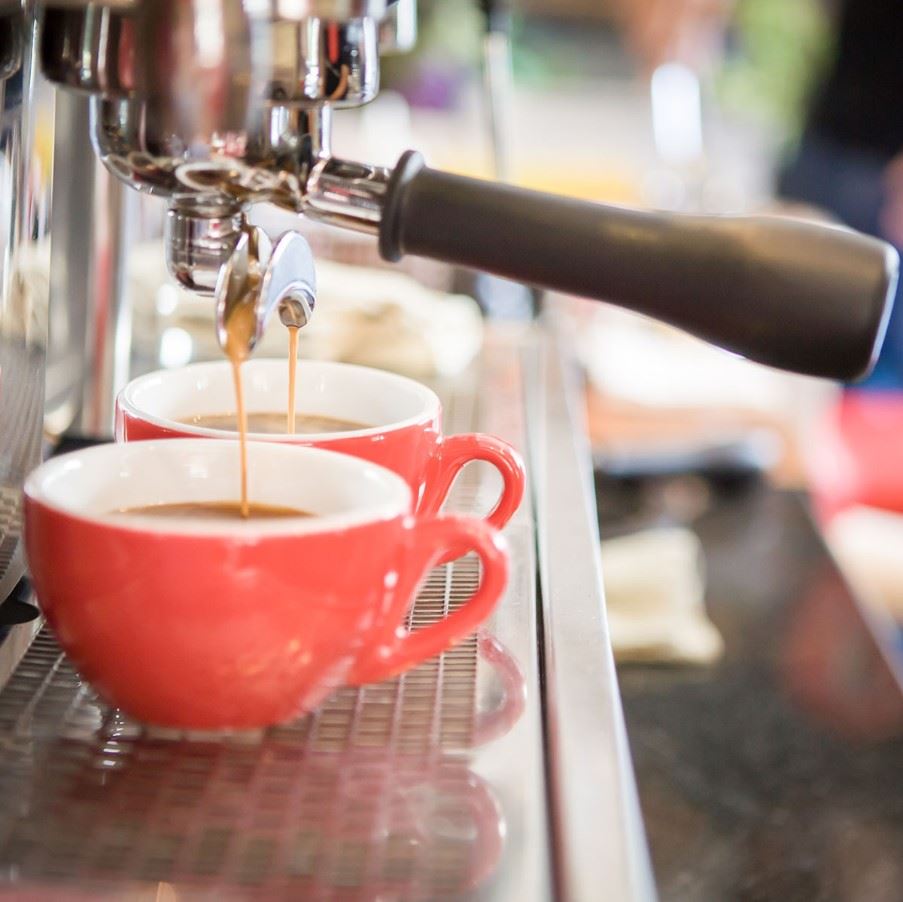 6. Climb to the top of the cupola in the Duomo

Designed by Filippo Brunelleschi, Florence’s famous cathedral looms majestically over the city with its magnificent Renaissance dome. After seeing the Duomo and visiting the inside of the cathedral, why not complete the experience by climbing to the top of the cupola. From here you will get stunning panoramic views over the terracotta rooftops of the city. There are 463 steps (yes, we counted them) – but it’s worth the effort so pace yourself. 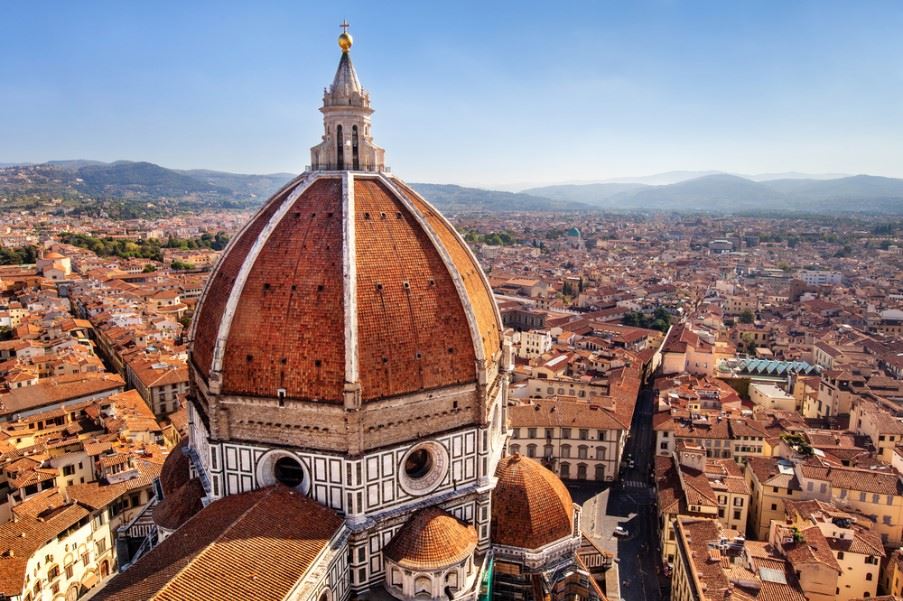 7. Walk across the Ponte Vecchio

The Ponte Vecchio which spans the Arno River dates from 1345. Initially, the bridge housed shops of all varieties including butchers and fishmongers.  Today you can find a selection of  jewellers, art dealers and souvenir shops.

Ponte Vecchio over the Arno River 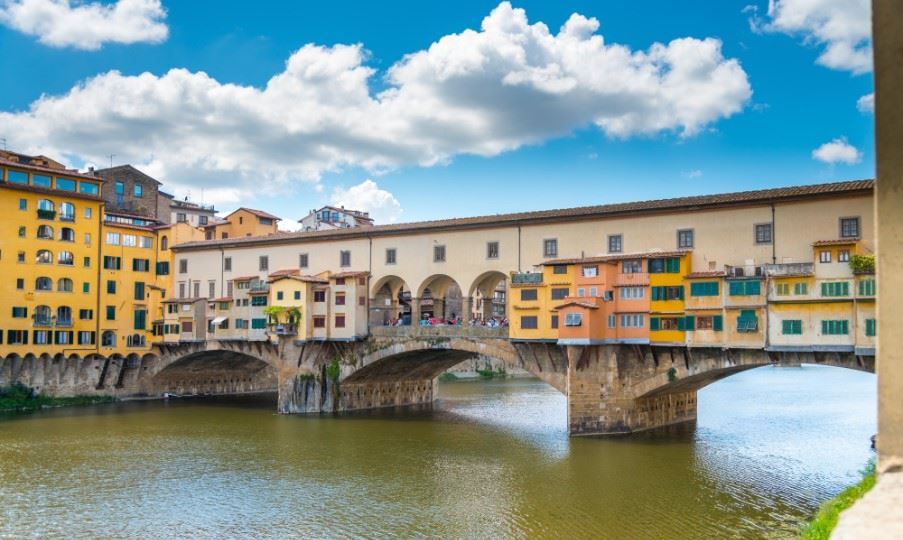 The graves of Michelangelo, Galileo, Machiavelli and Rossini can be found in this 13th century church which looks onto the Piazza Santa Croce. Inside the church, look out for a ‘tide plate’ which shows how far up on the pillars and walls, the water came during the severe floods in 1966. 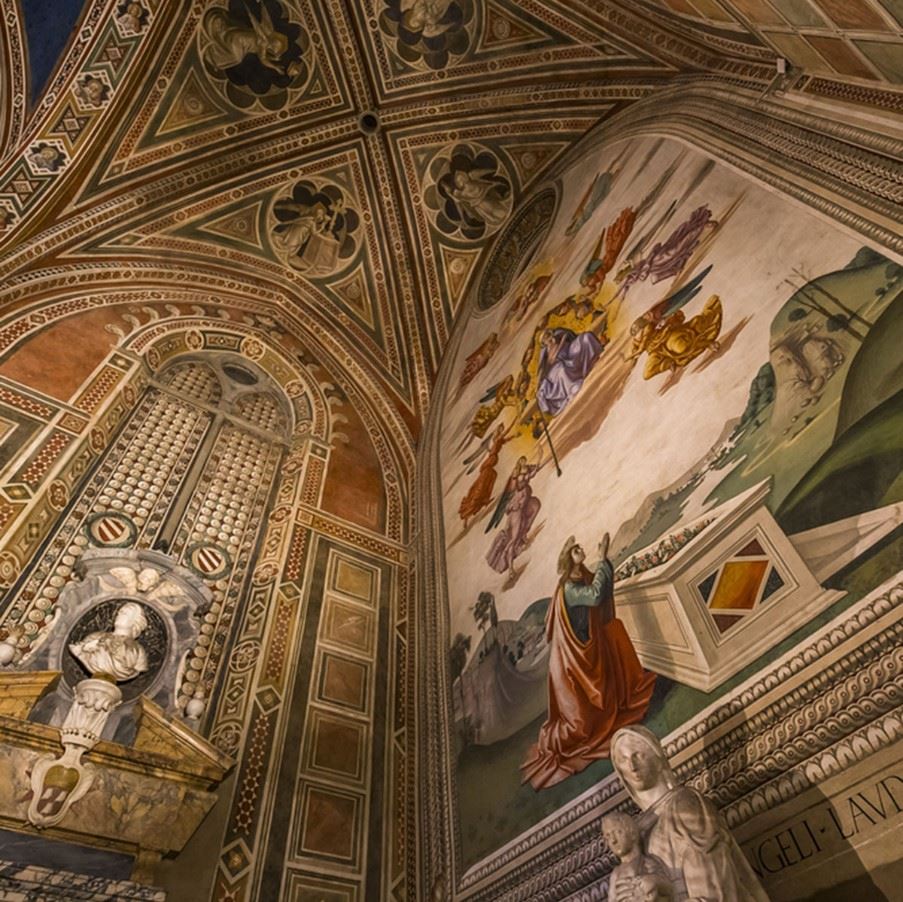 Marvel at the anatomical detail of Michelangelo’s original statue of David, housed in the gallery since 1873. Other works on display are 15th & 16th century Florentine paintings by Sandro Botticelli and Domenico Ghirlandaio. We would recommend visiting the Accademia late in the afternoon when the museum is least busy. The museum offers late openings in the summer months.

10. Off the beaten track

Just walking across the Arno River brings you to one of our favourite neighborhoods in Florence: the Oltrarno. Currently this area of the city is not as busy as the main tourist areas and is home to many artisan workshops, handicraft shops, gardens as well as museums. It’s the perfect place to end your day with a cocktail or coffee at one of the many bars in the piazzas. 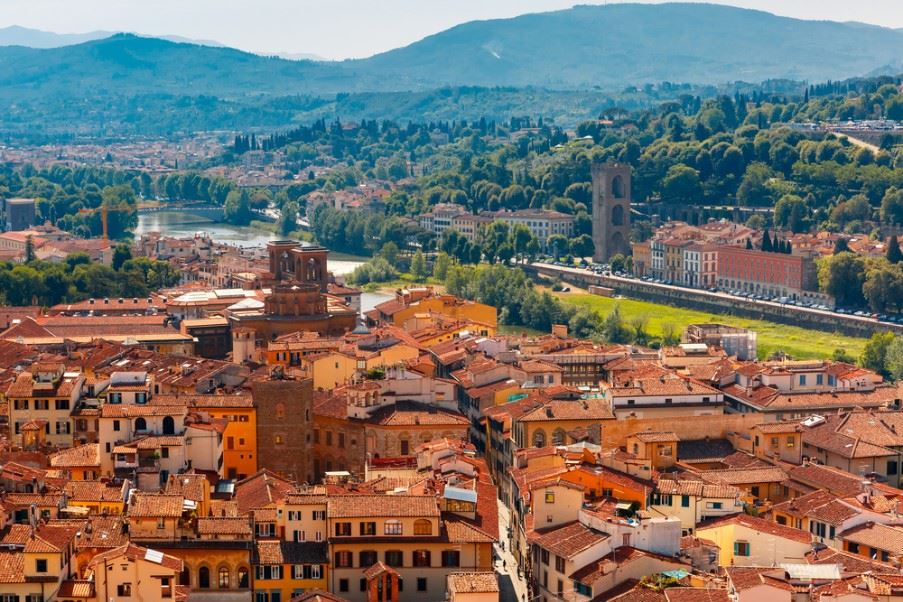 So if you’re planning to visit Florence and want to make the most of your trip, then we hope that our selection of attractions could be just the thing for you.