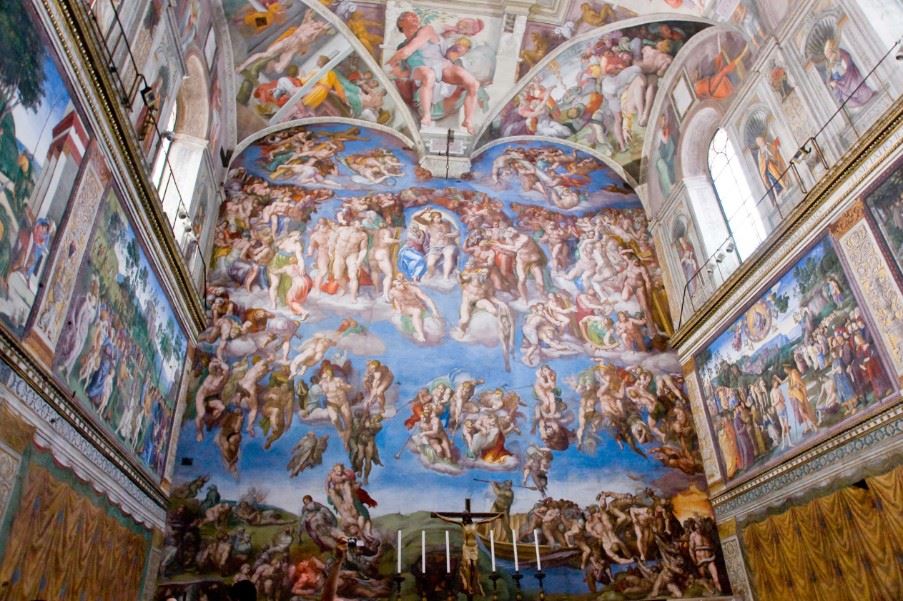 The Vatican City in Rome is a magnet for international visitors throughout the year; even in the winter months you’ll find queues at the entrance to the Vatican Museums and St Peter’s Basilica. Thanks to a recent announcement by Pope Francis, next year promises to be busier than ever. Having declared that 2016 will be the Holy Year of Mercy, a programme of events is taking shape in and around Rome to mark the extended jubilee, which begins on 8th December 2015 and ends on 20th November 2016. Many devout Catholics will make a pilgrimage to Rome during this period, while non-believers will also be drawn to the spectacle of the ceremonies which will take place in many of the city’s churches and public spaces.

So given this ‘perfect storm’ of insanely busy tourist attractions given a further boost by papal decree, is there any way to avoid spending hours waiting in enormous queues to see the Vatican’s main sights? The good news is that you can avoid the queues entirely with a little bit of advanced planning.

The secret to enjoying St Peter’s at its finest is to come early; by early I mean to be at the gates as it opens for the day. I arrived just after 7am and passed immediately through the security scanners and into the basilica. At this time of the morning St Peter’s is being used as a place of worship rather than as a glorified museum; incense burners and crucifixes comfortably outnumber the selfie sticks. The side chapels are busy with masses, while priests and altar boys glide over the marble floor, and nuns disappear and reappear through the many hidden doorways. Whatever your religious conviction, there’s an undeniable atmosphere of calm and solemnity. I stayed for an hour and even by 8am the basilica was starting to fill up, and the noise levels had begun to rise. Stay for a while longer to really appreciate your early start; if you want to feel extra smug, come back after 10am to see just how long the queue gets.

The museums are a huge treasure trove of paintings and sculptures by some of the world’s most famous artists, along with impressive collections of papal chariots, medieval globes and maps. Queues for the museum can take 2 hours or longer to negotiate, but it’s very simple to avoid the queue entirely; just book your tickets online (http://biglietteriamusei.vatican.va/) and try to secure a 9am slot.  We arrived at 8.45am and the queue for ticket sales was already 200 metres long, but with our printed ticket we walked straight to the front, through security and straight into the museum. For almost every one of the thousands of visitors who come each day, the Sistine Chapel is the main attraction. Most head straight for the signs to the chapel, but if you go to one of the other areas of the museums you can explore them pretty much by yourself. I enjoyed 18 galleries of paintings in the Pinacoteca section with only the security staff for company, while I didn’t see anybody in the Padiglione delle Carrozze (Carriage Pavilions). The crowds are an inevitable part of the Sistine Chapel. The best approach is to find a seat at the edge of the chapel and calmly take in the surroundings. If you’re able to plan your visit to the Vatican Museums for a Wednesday morning, this tends to be the quietest time of the week; that’s when the Pope has his audience in St Peter’s Square, and the crowds tend to concentrate there until 12 o’clock.

Spreading Christmas cheer with Sunvil: Our top 7 destinations to visit during the festive period Where to go on holiday in February Exploring the Aeolian Islands Dot com or dot con? Don’t be a victim of holiday fraud The Queen’s 90th Birthday: A Royal Visit Italy and the joy of gelato
Sicilian Citrus Fruits Infographic Start of the 2018 holiday season Exploring Puglia – along Italy’s heel A slice of island life on Lipari Where to go on holiday in September The Coronavirus | Airports Italy... what not to miss Italy’s Basilicata region and the village of Maratea EU referendum: What effect will the result have on your 2016 summer holiday? All for the love of travel | Looking forward Italy, you still make me smile! Highlights of Puglia Highlights of Venice All for the love of travel | Our 50th birthday An Introduction to Sicily’s Baroque Cities Spring forward to one of our many favourite destinations in 2018 April 2018 Supper Club - La Torta Sbrisolona Where to go on holiday in June Notes from the field – Puglia The Coronavirus | The latest news and advice Highlights of Campania Booking a holiday IS legal Green means go. Amber means...? Read more inside A day in Enna Tips for travelling post-lockdown Exploring Maratea without a car Our 10 Best things to do in Florence, Italy Notes from the field - Veneto Highlights of Tuscany October 2016 Sunvil Supper Club – Fried Neopolitan Pizza Train travel in Italy Highlights of Rome Tailor-made holidays in Puglia Our Top 5 Natural Wonders Of Sicily Highlights of Veneto and the Italian Lakes Where to go on holiday in July Syracuse – Exploring the historic treasures of Sicily Travel to and within Europe from 01Jan21 Highlights of Lazio The Coronavirus | Italy and Sicily Beating the colossal crowds at the Colosseum in Rome