An Introduction to Sicily’s Baroque Cities 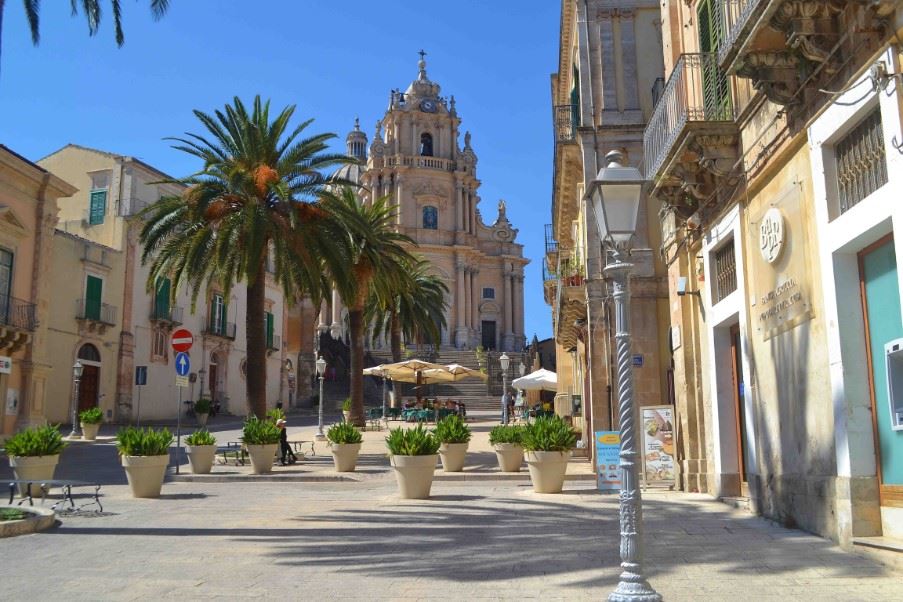 Sicily has suffered more than its fair share of earthquakes over the years, but for the south eastern corner of the island it is the devastating tremor of 1693 which has created a legacy that today is the region’s greatest draw for visitors. With several towns almost entirely destroyed, a major rebuilding programme was initiated using the most modern designs of the day. In the late 17th and early 18th centuries that meant baroque, with all its extravagant, excessive flamboyance. Today the churches and civic buildings of the region are a joy to explore, and the towns of Caltagirone, Militello Val di Catania, Catania, Modica, Noto, Palazzolo, Ragusa and Scicli have been collectively inscribed on the UNESCO World Heritage List, by virtue of being such impressive examples of late Baroque architecture.

On our recent trip to Sicily we spent three nights at the delightful Agriturismo Il Granaio just outside Modica.  There’s a pool, a spa and a restaurant serving traditional home-cooked dishes, and it’s easy enough to pass a few days relaxing and enjoying the surrounding countryside views. But we were there to explore, and the property is ideal to use as a base for driving to the Baroque cities; we talked to fellow guests who also made a day trip to Syracuse, around an hour’s drive away. From Il Granaio we made trips to Modica and Ragusa, having arrived via a stop in Noto.  Here’s a brief summary of what you can expect to see in these three cities.

We came to Il Granaio from Syracuse, and broke our short journey in Noto, which lies around 30 minutes’ drive from both places. Of the Baroque cities, Noto has the most outstanding main street, with the Corso Vittorio Emanuele cutting a wide trail along which the city’s grand buildings are found. The Cathedral Church of St Nicholas dominates the street, while the Chiesa Immaculata has a classic Baroque interior, and offers roof tours (free, but donations welcome) which provide great views of the city. While it is in the churches that the most prevalent examples of baroque splendour are found, Noto’s civic buildings are just as spectacular, and a 4 euro combination ticket allows you into the Civic Musuem, the Dukes’ Palace and the beautifully restored 19th-century Teatro Comunale Victor Emanuele.

With towering hills on all sides, it’s no surprise that any reasonable exploration Modica will exercise the hamstrings (and build up an appetite for the much-loved Modica chocolate). The climb to St George’s Cathedral involves around 270 steps, but the magnificent blue interior and the views from the top of the hill provide ample reward for your efforts. We were foolish enough to climb the hill in the midday heat; avoid this and you’ll have an easier climb than we experienced. Back at the bottom of the hill in the centre of town, the Cathedral Church of St Peter also offers a fine example of Baroque excess, with the added bonus of both chocolate and gelato available directly opposite the entrance. Look out around Modica (and in fact throughout the region) for references to Inspector Montalbano. Most of the popular TV detective series is filmed around here, and we even a found shop in Modica claiming to sell his favourite snacks. They are certainly cashing in on the programme’s international popularity, and good luck to them.

The largest of the Baroque cities, Ragusa is roughly divided into an upper town (Ragusa Superiore) and the more historic old town, Ragusa Ibla. The lower town is a lovely place in which to get lost among the maze of lanes and alleys, and having arrived on an intensely hot day we found the shade provided by the tightly-packed houses very welcome. The main attraction is the Cathedral of St George, and the square outside is a lively and attractive spot with cafes offering meals and ice creams. At the bottom end of the town is the Giardino Ibleo, a pleasant municipal park and a popular hang-out for the local school kids and office workers at lunchtime. There are fabulous views of the valley below, and it’s a place to linger if you can find a bit of shade.

A quick word on visiting churches in Sicily. On the whole they are free to enter, but opening hours are quite short, with most churches closing between around 12.30pm and 4pm; some closed before midday. Visitors are expected to dress and behave respectfully, and there’s usually no restriction on photography (the use of a flash is sometimes not permitted). While the average visitor can easy develop church fatigue, remember that long after you’ve seen the 50th Baroque ceiling and stopped saying “Wow” on entering a church, if you’re visiting in summer you’ll never tire of the cool shade, the quiet and the free seats which an old church offers.

The Queen’s 90th Birthday: A Royal Visit Start of the 2018 holiday season Exploring Puglia – along Italy’s heel Italy... what not to miss Italy’s Basilicata region and the village of Maratea Italy, you still make me smile!
Highlights of Puglia Highlights of Venice Spring forward to one of our many favourite destinations in 2018 April 2018 Supper Club - La Torta Sbrisolona Where to go on holiday in June Notes from the field – Puglia Highlights of Campania Visit Rome in 2016: The Holy Year of Mercy Notes from the field - Veneto Highlights of Tuscany October 2016 Sunvil Supper Club – Fried Neopolitan Pizza Tailor-made holidays in Puglia Highlights of Veneto and the Italian Lakes Where to go on holiday in July Sicily... what not to miss A walk through time: Highlights of Syracuse and the island of Ortigia Easter in Sicily: Trapani Good Friday Procession Where to go on holiday in April Highlights of Eastern Sicily Where to go on holiday in March Highlights of Western Sicily All for the love of travel | Ask the experts Where can Sunvil take you this spring? Where to go on holiday in October Autumn escapes Highlights of Sicily Holidays in the shadow of Mount Etna Horatio Nelson April 2017 Sunvil Supper Club – Sicilian-style Chicken (Pollo ai Profumi di Sicilia) Sicily – in the footsteps of Inspector Montalbano All for the love of travel | Sicily World Book Day with the Sunvil Team Wild landscapes of Svalbard – a photo post Boutique Greece Winter holidays in Swedish Lapland Notes from the field - Sao Tome and Principe 5 day trips from Copenhagen Wildlife wonders of Costa Rica Notes from the field - Swedish Lapland in June 7 Facts about the Northern Lights Stockholm: An affordable city break The ICEHOTEL celebrates its 31st anniversary Birds of Latin America – Colouring Page Illustrated Map: The Wine Growing Regions of Portugal 5 reasons to visit Panama Take a walk around Oslo with Sunvil A trip to the Azores Island hopping on Sweden’s west coast 5 Ideas for Spa Breaks in Portugal Their race has finished, let your Latin America journey begin UNESCO World Heritage Sites in Latin America My experience at the TreeHotel Introducing the Art Suite designs for the 26th ICEHOTEL in Swedish Lapland Our top 5 destinations for wine lovers Travel to and within Europe from 01Jan21 Exploring the Aeolian Islands Dot com or dot con? Don’t be a victim of holiday fraud The Coronavirus | Airports Italy and the joy of gelato The Coronavirus | The latest news and advice Sicilian Citrus Fruits Infographic A slice of island life on Lipari Where to go on holiday in September Highlights of Lazio EU referendum: What effect will the result have on your 2016 summer holiday? All for the love of travel | Looking forward All for the love of travel | Our 50th birthday Beating the colossal crowds at the Colosseum in Rome Tips for travelling post-lockdown Booking a holiday IS legal Green means go. Amber means...? Read more inside A day in Enna Exploring Maratea without a car Our 10 Best things to do in Florence, Italy Train travel in Italy Highlights of Rome The Coronavirus | Italy and Sicily Our Top 5 Natural Wonders Of Sicily Syracuse – Exploring the historic treasures of Sicily