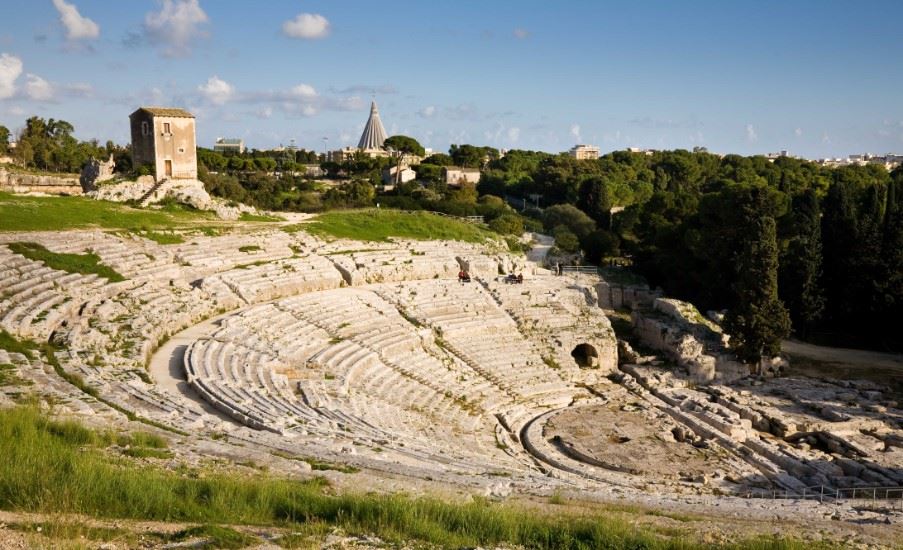 While Athens is widely considered the centre of the Ancient Greek world, for over two centuries Syracuse in eastern Sicily was an equal, if not more powerful and prosperous rival. In fact when the Athenian army was defeated in a botched invasion of Sicily in 415 BC, its soldiers must have been quite shocked to find what was by then a wealthy and highly developed city. The decline of Syracuse as a major Greek city began when the Romans arrived in 212 BC. The subsequent years have seen an almost revolving door of invaders, including Vandals, Goths, Byzantines, Arabs and Normans. During these years Syracuse’s influence rose and fell, and in time other Sicilian cities eclipsed the ancient port in influence and trade.

The history of Syracuse stretches back for over 2,500 years, and yet today’s city is certainly far more than an archaeological ruin. Syracuse is a lively modern city with its share of 20th-century construction, restaurants, nightlife and of course, traffic problems. It’s quite reasonable to plan several days visiting the sites in and around Syracuse, exploring the remnants of Sicily’s many conquerors. At the Neapolis Archaeological Park, a 10-minute walk from the city centre, you’ll find a wealth of Greek and Roman ruins. These include a Greek theatre (which is still being used for summer performances), a Roman amphitheatre with stone sarcophagi, and two caves known as the Ear of Dionysius and the Ropemakers’ Cave. Even the site’s tourist office has a story of its own – it’s a former 11th-century basilica, with grottos which archaeologists believe once housed the tombs of early Christian martyrs.

At the tip of Syracuse, just beyond the harbour and linked to the city by three bridges, is the densely-packed island of Ortygia. The Duomo is an imposing church in the centre of Ortygia, created with typical Baroque over-indulgence, but it’s also the site of the ancient Temple of Athena. Look closely at the relatively modern construction and you’ll see plenty of evidence of its ancient Greek roots. Nearby is the Spring of Arethusa, who legend has it was turned into a water spring by Artemides, in a failed attempt to avoid the attentions of Alpheus; failed, because Alpheus had Zeus turn him into a river, so the two were destined to be together – just your typical ancient Greek soap opera.

For a slightly morbid piece of ancient history, head to the stone quarries at Latomia dei Cappuccini. It is said that the Greek soldiers captured during their failed attack in 415 BC were brought here and left to starve to death. As well as this gruesome tale, the site was also an early Christian burial ground, and in the last century the city authorities tried without much success to turn the site into parkland and gardens for the citizens of Syracuse to enjoy. It’s now a slightly out-of-the-way attraction, but an important part of the city’s history nonetheless.

If you’re looking for a base while exploring south-eastern corner of Sicily, the Commenda di San Calogero offers a country retreat on Sicily’s east coast and is around 35 minutes’ drive from Syracuse. There are only 12 guest rooms in this former feudal estate house, and there’s a Indian-style pavilion, along with Italian and English gardens. Guests looking for a bit of pampering can enjoy the spa services in the on-site Turkish baths, while some of the guest rooms have their own jacuzzis.