A slice of island life on Lipari 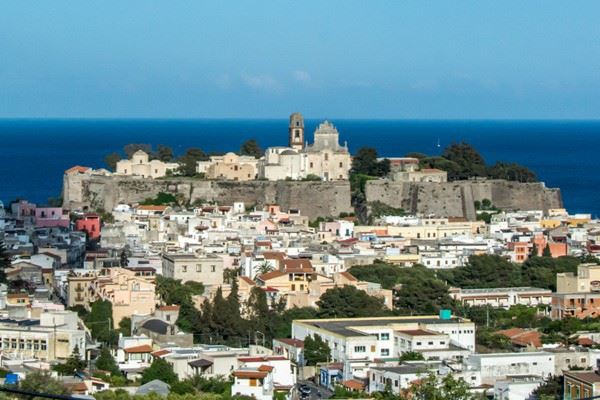 A pretty harbour, decent beaches, plenty of good restaurants and a laid-back, friendly vibe; Lipari ticks pretty much every box of the perfect holiday island. It’s also just about far enough away from Sicily and mainland Italy to avoid being overrun with visitors, except for the short July and August window when what appears to be half of Italy descends on the island. And if its own charms aren’t enough to woo you, Lipari is an ideal base to explore the other Aeolian islands, with Vulcano and Stromboli famous for their volcanic activity.

Most of the action on Lipari is centred on the built up area below and surrounding the medieval hilltop fortress on its east coast. The fortress site itself is worth exploring, with a classic cathedral and three modest museums (two containing archaeological finds from the islands, and one devoted to the nearby volcanoes). English information is sparse, especially in the volcano museum, but unless the weather is bad (it hardly ever is here), then an hour or so is long enough to get an idea of what’s on offer in all of the museums.
Marina Corta Lipari 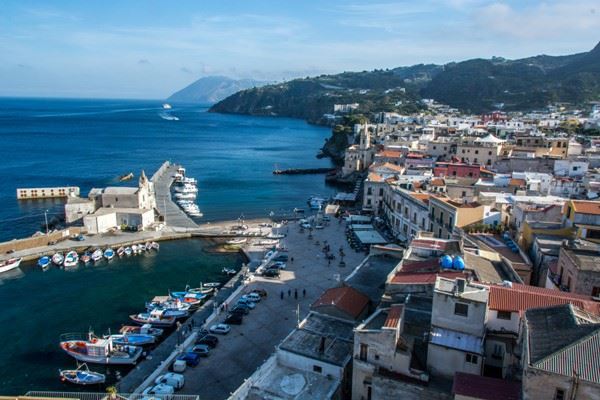 The town is a maze of narrow lanes winding around the fortress rock, with only the main road, Corso Vittorio Emanuele II, maintaining anything close to a straight line. There is the usual mix of souvenir shops, art galleries and fashion boutiques, and the shade of the tall buildings is very welcome against the blazing sun. The prettiest spot of all is the Marina Corta, the small harbour which serves as a departure point for most of the excursions to the outer islands. It’s easy to while away an hour just sitting by the waterfront, watching the local activity and admiring the surroundings with an ice cream or a drink in hand.

Our usual blind gamble with restaurants for once threw up two resounding successes on Lipari. At La Cambusa, a busy trattoria just below the fortress, I enjoyed a perfectly cooked calamari steak, while thanks mainly to a delicious pistachio and prawn risotto, the trendy Kasbah restaurant was one of our favourite dinner stops in our entire three weeks in southern Italy. For desserts we invariably wound up at Il Gabbiano at the Marina Corta, where the ever-smiling owner Bartolo served up scoop after scoop of homemade, high-quality gelato.

Exploring the rest of Lipari beyond the town is easy, thanks to a very laid-back bus system which, unusually for Italy, works well and is very easy to understand. We took a bus along the winding road to Quattropani in the north-west corner of the island. The views of Vulcano and Etna in the distance were outstanding, and once the driver had confirmed that he would be coming through again in an hour’s time, we walked to the isolated church of Maria della Catena, set against a backdrop of the Mediterranean Sea, the late afternoon sun and the outer islands. We had the place to ourselves and, with only the sound of the crickets and the birds to break the silence, it provided a perfect temporary retreat on what is, after all, an island retreat.

We stayed on Lipari at the Rocce Azzurre Hotel, a relaxed family-run hotel in a fabulous setting on the east coast. It’s 5 minutes’ walk from the Marina Corta and has a sunbathing deck with steps leading straight into the shallow water beside the beach.
Rocce Azurre Hotel, Lipari 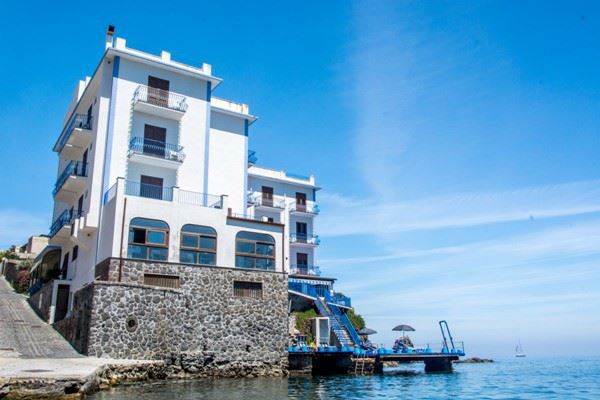 The Queen’s 90th Birthday: A Royal Visit Start of the 2018 holiday season Italy’s Basilicata region and the village of Maratea Highlights of Lazio Italy, you still make me smile! Highlights of Puglia
Highlights of Venice Beating the colossal crowds at the Colosseum in Rome Spring forward to one of our many favourite destinations in 2018 April 2018 Supper Club - La Torta Sbrisolona Where to go on holiday in June Highlights of Campania Visit Rome in 2016: The Holy Year of Mercy Notes from the field - Veneto Highlights of Tuscany October 2016 Sunvil Supper Club – Fried Neopolitan Pizza Highlights of Rome Tailor-made holidays in Puglia Highlights of Veneto and the Italian Lakes Where to go on holiday in July Sicily... what not to miss A walk through time: Highlights of Syracuse and the island of Ortigia Easter in Sicily: Trapani Good Friday Procession Where to go on holiday in April Highlights of Eastern Sicily Where to go on holiday in March Highlights of Western Sicily All for the love of travel | Ask the experts Where can Sunvil take you this spring? Where to go on holiday in October Highlights of Sicily Holidays in the shadow of Mount Etna Horatio Nelson April 2017 Sunvil Supper Club – Sicilian-style Chicken (Pollo ai Profumi di Sicilia) Sicily – in the footsteps of Inspector Montalbano World Book Day with the Sunvil Team The attractions of Chrani and surrounding Areas Cape Horn: A most memorable travel experience No-deal warning: don’t go on holiday after March 29 2019 | Sunvil's response Returning to our TV screens in April, 2017 – Corfu and The Durrells Trondheim, the original capital of Norway 10 reasons to go to Norway on your next holiday Highlights of Northern Portugal Notes from the field - Andalucia Sagres – the end of the world A walk in Thessaloniki’s Upper Town Walking in Kalami, Corfu On the history trail in Cyprus 7 things not to miss in Argentina Greece: The truth behind the headlines – Part Three 5 people you may not have known were Greek Barra da Tijuca – a very modern side of Rio Notes from the field – Corfu and Paxos Tolon revisted Do come to Samos In 2016! Notes from the field – Brazil, Argentina & Uruguay May 2016 Sunvil Supper Club – Skopelos Goat and Prunes The unique wonders of the Galapagos Islands Notes from the field - Costa Rica 7 Facts about the Northern Lights Up and coming Greek islands An exciting glimpse of this year’s ICEHOTEL suites Golf Holidays in Cyprus Notes from the field – The Sacred Valley, Peru Questions to consider when planning a fly-drive holiday to Greece or Cyprus On the Trail of Aristotle Alentejo Wine routes Ammouliani – Halkidiki’s Secret Island Five unreal places in South America you have to visit Greece and the Mamma Mia Trail Stargazing in the Atacama Desert in Chile Monemvasia - A Plan For All Seasons Paphos – European Capital of Culture 2017 Highlights of Northern Norway Highlights of West Sweden Spectacular Lofoten Islands and Vesteralen Spotlight on Wildlife: Jaguar Discover the alternative activities on Ikaria Celebrating Carnival in South America The 29th incarnation of the ICEHOTEL's Art Suites Gotland – Sweden’s Holiday Island Notes from the field – Northern Portugal Paphos - European Capital of Culture 2017 Esteros del Iberá – Argentina’s secret natural wonder Notes from the field – Svalbard, Norway Discover UNESCO World Heritage sites on Cyprus ICEHOTEL 365 – the famous hotel becomes a year-round attraction Birdwatching holidays in Guatemala Island style: Luxury and boutique hotels in the Azores Holidays in the Peloponnese – a short introduction Oaxaca, Mexico’s Cultural Heart The Greek island of Samos and a journey to the land of Pythagoras The little-known sites of Ancient Greece Notes from the field – The Northern Fjords Staying at the ICEHOTEL in Sweden Great hikes and idle strolls on Crete Southern Albania as part of a twin-centre holiday The Algarve – Our Top 10 Cultural attractions Discover the Koster Islands, Sweden’s Secret Hideaway A Brief Guide to Thassos Celebrating Greek Easter 5 Ideas for Spa Breaks in Portugal Driving around Naxos The Azores May time in Greece Spotlight on Wildlife: Hummingbirds Who can you trust? 10 things you didn’t know about the Azores Leaves from a Greek Village 10 tips for travelling in 2022: learn from the experiences of the Sunvil team Notes from the field – the Algarve On the trail of Aristotle on his 2400th birthday Small-ship Amazon cruises The legends and charms of Lemnos Things to do in Norway while waiting for the Northern Lights Notes from the field – Svalbard, Norway 5 things to do on a summer holiday in northern Sweden The Alentejo - hidden Portugal Öland – a very Swedish holiday island 5 things to do when you miss your ferry on Skopelos! 5 highlights of a holiday in Chile Alternative activities in Ikaria San Ignacio Mini The five seasons of Svalbard A day in the Marine Park of Alonissos Greece Revisited Dion Alentejo - Guest Blog by Mary Novakovich Wild encounters in Latin America Limenas – the laid-back main town of Thassos Dodecanese – an introduction to 5 of the lesser-known islands Dot com or dot con? Don’t be a victim of holiday fraud Italy and the joy of gelato Sicilian Citrus Fruits Infographic Exploring Puglia – along Italy’s heel Where to go on holiday in September The Coronavirus | Airports Italy... what not to miss EU referendum: What effect will the result have on your 2016 summer holiday? All for the love of travel | Looking forward All for the love of travel | Our 50th birthday An Introduction to Sicily’s Baroque Cities Notes from the field – Puglia The Coronavirus | The latest news and advice Booking a holiday IS legal Tips for travelling post-lockdown Exploring Maratea without a car Our 10 Best things to do in Florence, Italy Train travel in Italy Syracuse – Exploring the historic treasures of Sicily Autumn escapes All for the love of travel | Sicily Travel to and within Europe from 01Jan21 Green means go. Amber means...? Read more inside The Coronavirus | Italy and Sicily A day in Enna Our Top 5 Natural Wonders Of Sicily Exploring the Aeolian Islands