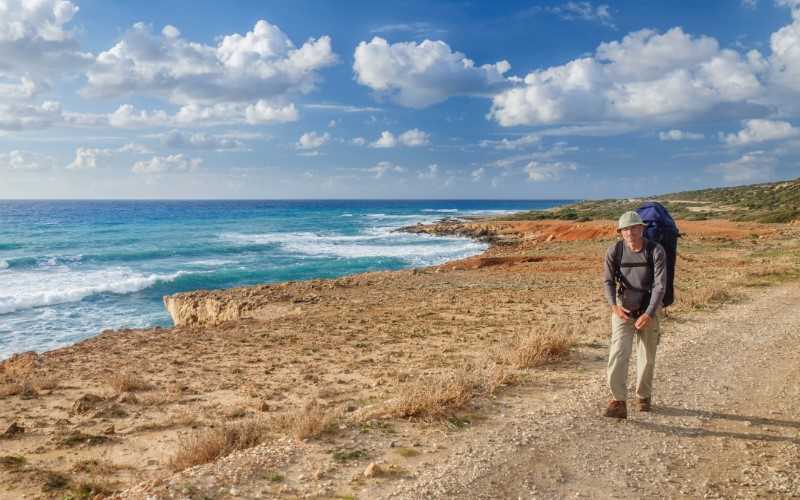 The heartland is mountainous and there are no tarmacked roads. Until 2000, the area was used by the British as a firing range for 70 days a year but the Akamas has long been recognised as one of the most beautiful and pristine places on the island. Parts of the Akamas are a special conservation area but there is enormous pressure to develop the region and the EU, The Cyprus Green Party, Greenpeace and The Friends of The Earth are heavily involved in its protection.

As it is mostly inaccessible, the Akamas supports a wide diversity of life and vulnerable species, some of which are endemic to the area. 39 of the 128 endemic plant species of the island are found in the Akamas. The loggerhead turtle nests on the beaches and animals include fruit bats, shrews, hedgehogs, snakes, lizards, foxes, scops owls, griffon vultures and monk seals.

Sir David Attenborough has filmed here and in Greek Mythology this is where Aphrodite met her lover Adonis, and The Fontana Amorosa is said to be Aphrodite’s fountain of love. There are three notable gorges in the Akamas; namely Androlykou, Petratis and Avakas, where the cliffs almost touch above you.

The Akamas is on track to become a National Forest by 2022 and a premier walking and hiking region.

Note: The itinerary can be shortened or lengthened, as can stays in each village. Minimum stay is two nights in any location. Entry to archaeological sites, local attractions and museums where applicable are not included and are payable locally. This itinerary can also be followed by bicycle at a supplement and specialist guides can be hired locally to accompany walks.

Upgraded accommodation in Latchi on request and at a supplement.

Board Basis: Self Catering, Bed & Breakfast

Arrive at Paphos Airport and transfer to the Tavros Hotel Apartments where you will stay in studio accommodation (self catering) in Neo Chorio for four nights.

Neo Chorio, with a population of approximately 500 persons, is the gateway to the Akamas National Park and is located 8 kilometres west of Polis, the main town on the north-western coast of the island. The village is 157 metres above sea level and has two good tavernas and provision stores. The views from here down to the coast are panoramic. 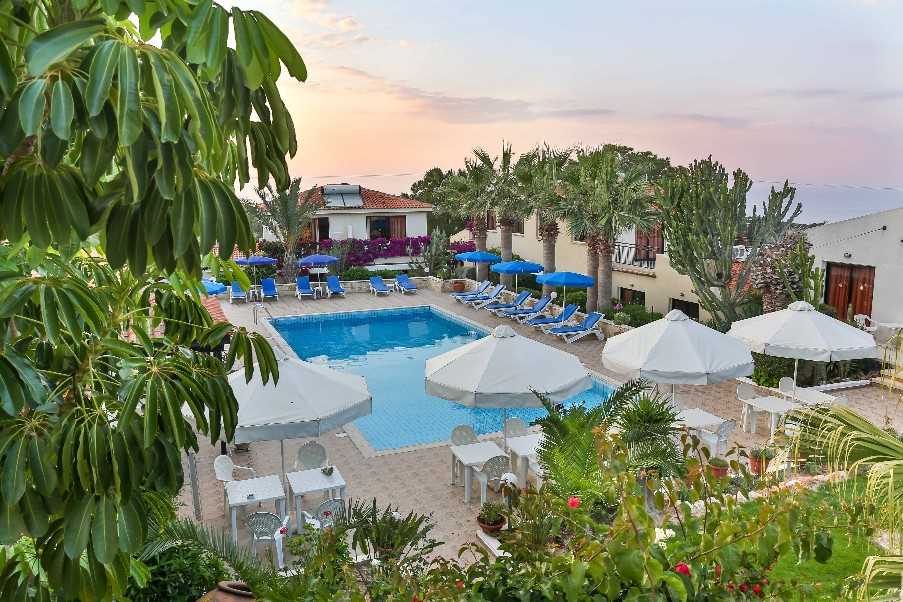 There are two walks beginning from the Smigies picnic site; an easy 2.5 kilometre walk through the village and out through olive groves, or a longer 5-kilometre route (both graded at 2 for difficulty). Today, why not take the shorter route which takes approximately 1 hour. Throughout your leisurely stroll take heed of the views to the east of Polis Chrysochous Bay, Latchi, Pachyammos and Pafos Forest, and to the west Lara Bay, Tzioni and Karavopetres. After your walk why not visit pretty Kathikas Village, a twenty to twenty-five-minute drive from Neo Chorio. Taxi transfers to and from Kathikas are included in your stay. 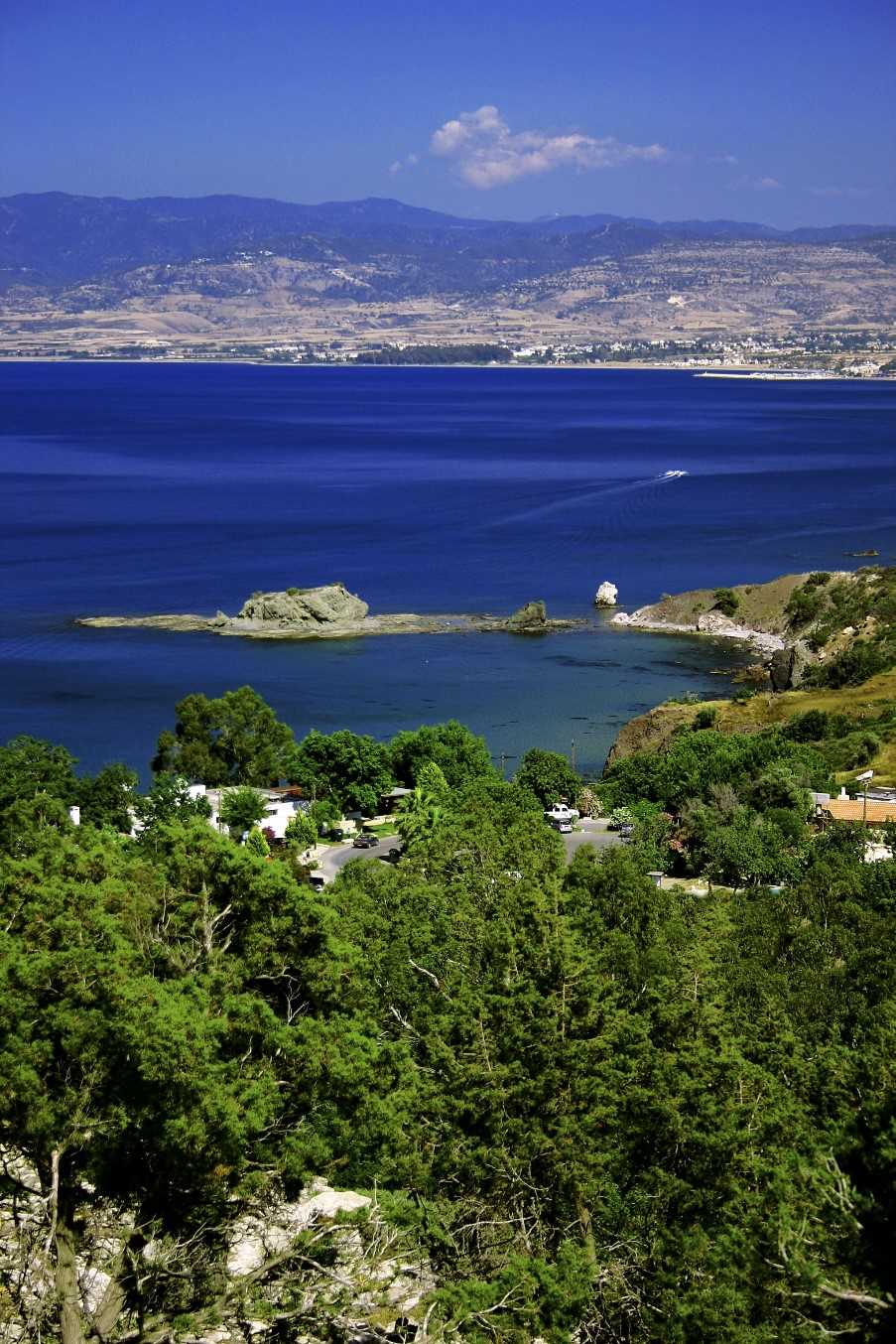 In the morning, take a taxi to the nearby village of Droushia and to the dairy there (return taxi transfers included as part of your stay). You can witness the overall process and making of the traditional Cyprus cheeses of Halloumi, Halitzi (similar to feta but with holes) and Anari. You can try your hand at making the cheese and of course purchase any product from the dairy. During the afternoon, why not burn off all that cheese and take the longer walking route, starting from Smigies picnic site and lasting approximately 2 hours. This route goes past the disused magnesium mines which include a deserted kiln and then through a dense part of Akamas forest. This walk also links up with the Adonis trail at the location Kefalovrysia (potable water fountain location). 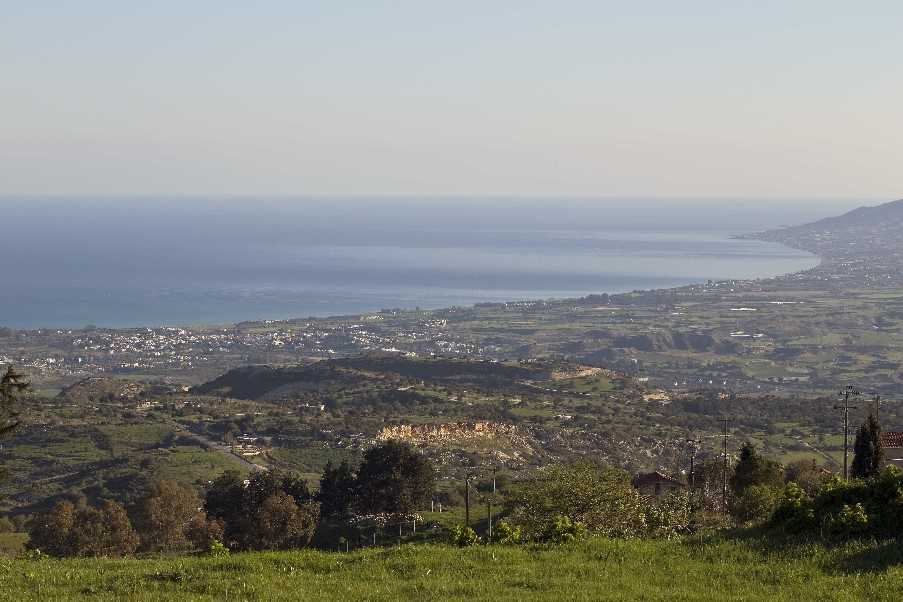 Today take the Pissouromoutti Trail; a 3-kilometre circular walk with views of Polis Bay to the northeast and beaches of Akamas to the west. During this route you will also witness rich growth of Juniper Phoenicia and Pistacia. There are other walks that begin from nearby areas. The Tavros Hotel Apartments can arrange a taxi to take you to the starting points. Although, the most impressive is the walk through the Avagas Gorge. This is a linear walk of 1.2 kilometres, and it takes around 45 minutes to walk through this narrow gorge. It is graded difficulty 2. 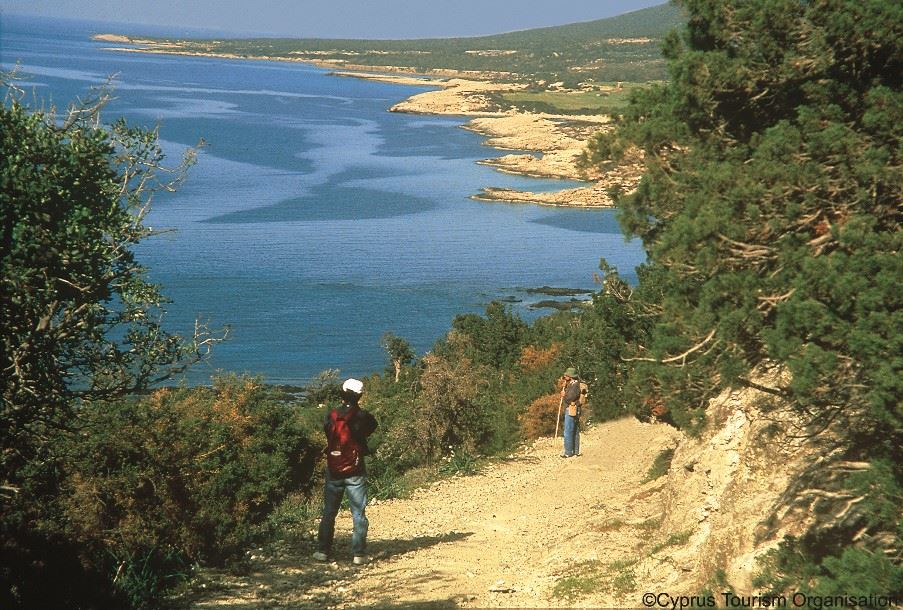 The walk along the road from the Tavros Hotel Apartments to the Souli Hotel, set on the beach below, will take you half an hour (2.7 km) and, luckily, it is all downhill! Your luggage will be transported to the new hotel. Board basis here is bed and breakfast but the hotel has a very good beach taverna. Rooms are with sea view. The harbour of Latchi, with all its tavernas and restaurants is only 400 metres away.

Start your day off by walking to the Baths of Aphrodite where, according to tradition, the Goddess of Love used to bathe. It takes around an hour to walk to the baths and this particular walk takes 3 hours to complete and the terrain is not flat. If a total of five hours is too much, then the hotel can arrange a taxi from the hotel to the baths and this can be paid locally. From the Baths of Aphrodite follow a rising path to the hill known as Moutti tis Sotiras (370m). This can be quite tiring, especially in summer. However, there are two potable water fountains, one near the ruins of Pyrgos tis Rigainas (Queen’s Tower) and one between the location of the Baths and Kakoskali. Along the trail there are several points which give a view of the bay of Polis Chrysochous and the Paphos Forest. The ruins of the Pyrgos tis Rigainas (Queen’s Tower), which are believed to have belonged to a medieval monastery, are a sight to behold. It is also worth mentioning the huge, centuries-old, oak tree which can be seen at the picnic site. 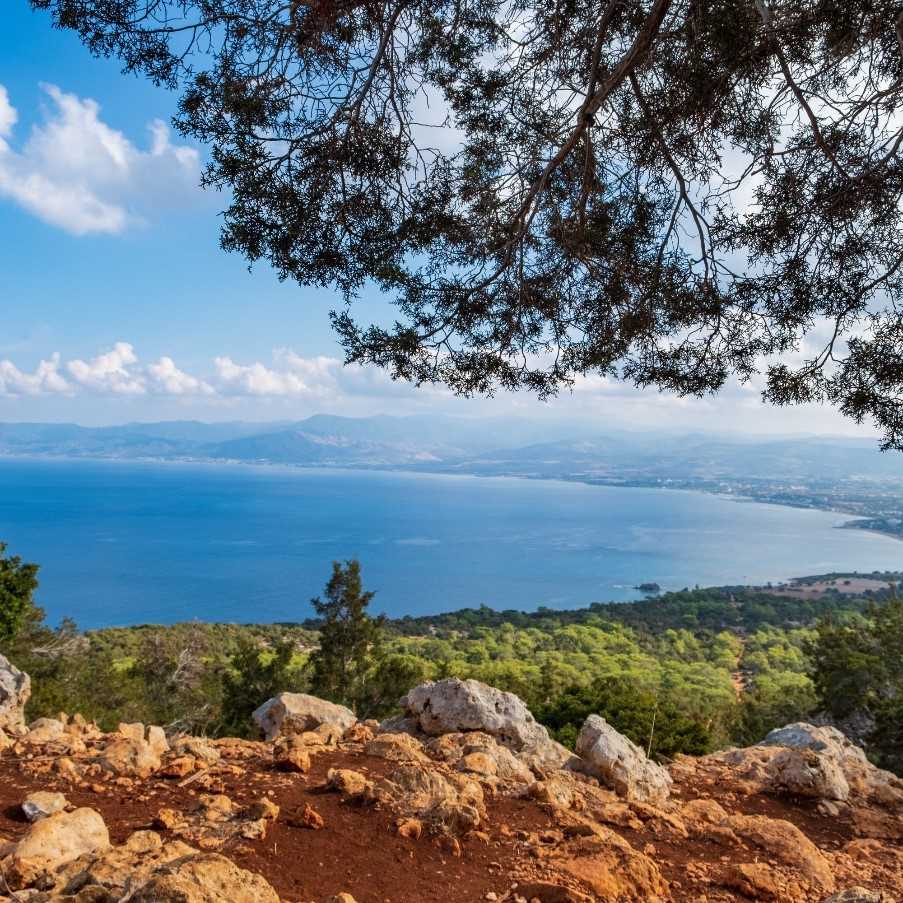 The Adonis Trail, which also begins from the Baths of Aphrodite, and can be quite tiring as there are many uphill sections and the terrain is rugged. However, it is certainly worth it as there are many beautiful sights and points of interest throughout. For example, from the western part there are views of various beaches of the Akamas, such as Lara Bay, Tzioni and Karavopetres. The path you follow goes past Pyrgos tis Rigainas (Queens Tower). At the Kefalovrysia location, it links up with the Smiges trail. In order to complete its circular path, the trail follows the main road connecting the Baths of Aphrodite and Polis, for about 400m. 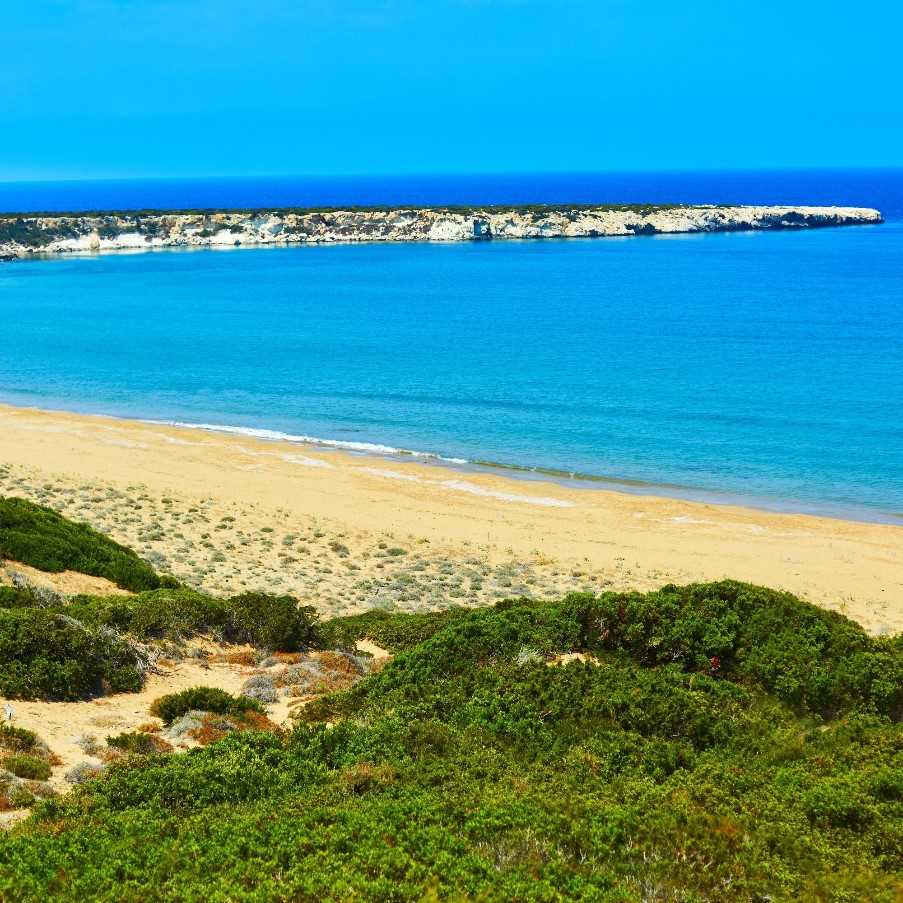 Why not spend your final day relaxing at the beach, with a drink and a book at hand. The beach all along this coast is made up of a mixture of sand and shingle and the swimming is first rate. If you fancy something a little different, our local representative, Angela can arrange a visit to Latchi’s two wineries: Vasilikon and Sterna. 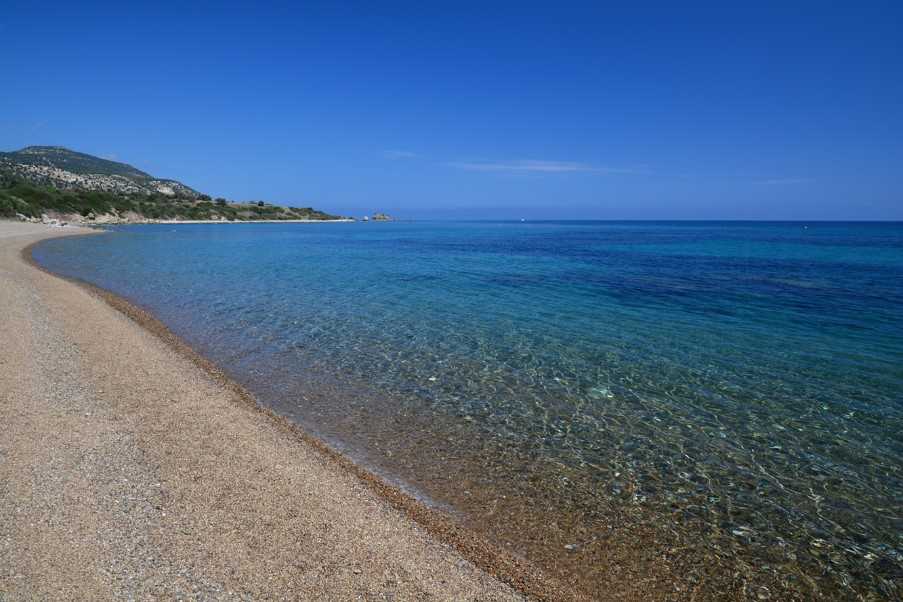 Today you will be transferred from the hotel to Paphos Airport for your return flight home. 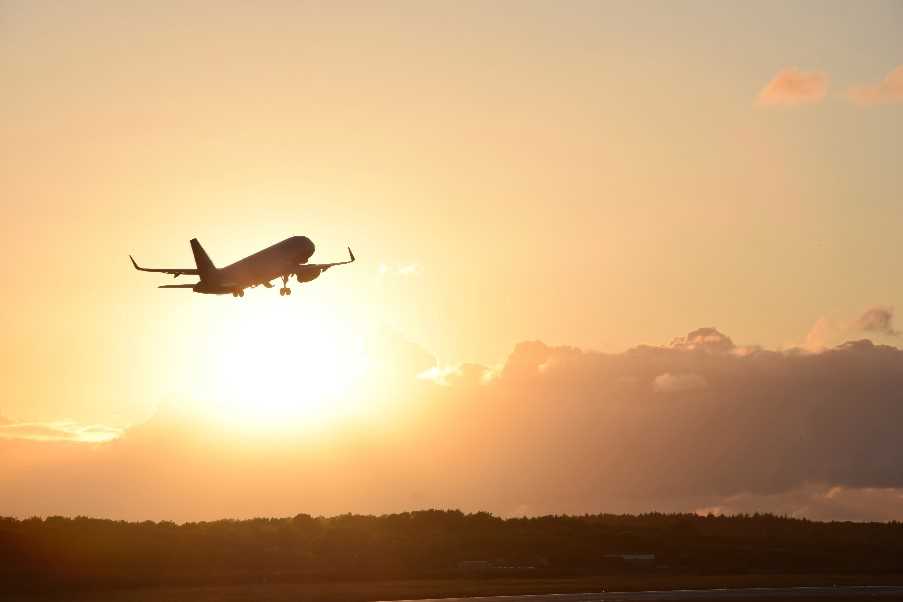 These family managed apartments which are firm and long-standing favourites, stand on the outskirts of the attractive village of Neohorio, the gateway to the Akamas National Park. The village is located above Latchi and boasts three good tavernas and provision stores.

These family managed apartments which are firm and long-standing favourites, stand on the outskirts of the attractive village of Neohorio, the gateway to the Akamas National Park. The village is located above Latchi and boasts three good tavernas and provision stores.

It is just over two miles down to Latchi Harbour and three miles to the Baths of Aphrodite. The apartment complex is made up of six small sections with a total of 6 studios and 24 one bedroomed apartments with mountain, pool or sea-view built around a swimming pool which is set within a mature garden.

A wonderful location and accommodation which is very highly thought of by our clients.

6 pine furnished studios sleeping up to 3 persons with kitchenette, bathroom with bath and shower, satellite TV, telephone, living/sleeping area with 2 single beds and a sofa bed and patio or balcony. The 24 one-bedroomed units have an additional bedroom with either twin or double beds and a double sofa bed in the living area suitable for 3 adults or 2 adults and 2 children. Apartments have sea view, mountain view or pool view. All units have free WiFi.

*Air conditioning is available at a local charge of c. €6.00 per unit per day.

This unpretentious family run, simple hotel with 50 air-conditioned (payable locally) rooms, boasts an exceptional location on Latchi's sand/pebble beach. Small, friendly and easy going, this is an ideal base to explore and enjoy the natural ambience of the area.

Views from the balconies of the sea-view rooms are of the pool, beach and open sea.A short stroll will take you to Latchi fishing harbour with its numerous cafes, restaurants and tavernas and where fish is an absolute must. The hotel itself boasts a very good seafront indoor and outdoor taverna. The hotel also offers bike hire for the more adventurous guests who wish to explore further afield.