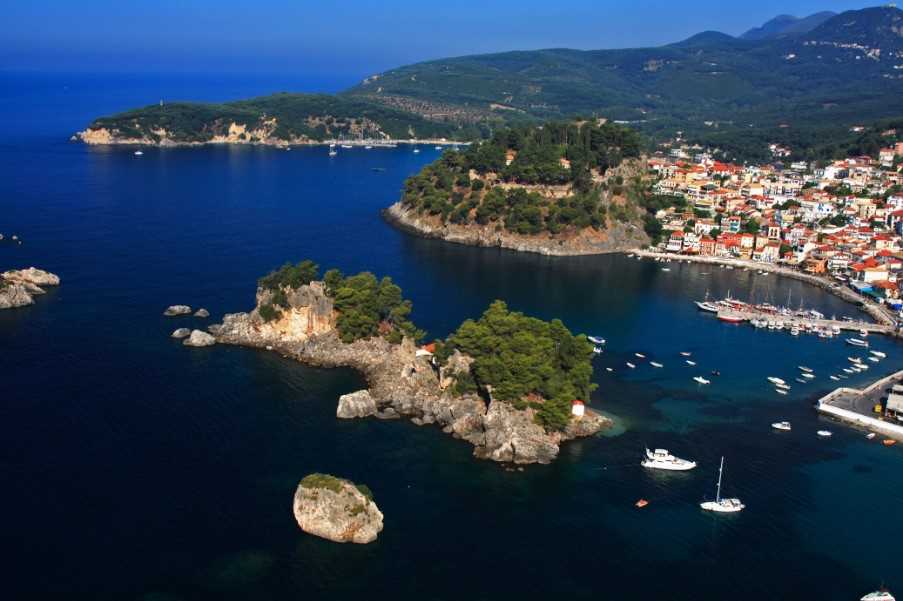 The Ultimate Island Hop in memory of Ismet (Issy) Emin.

On 17 April, the Sunvil team awoke to the news that our dear friend and colleague, Ismet (Issy) Emin had passed away after a hard fought battle with the Coronavirus. He was a much-valued and much-loved member of our family, with an ear for all and a spirit to light up the room. We all miss him dearly.

Ismet and his family were, and remain, passionate supporters of the charity Help For Heroes, having lost loved ones in conflict. We have chosen to take up his baton and to raise funds in his name for the cause so close to his heart.

From 01-31 May we will be attempting to cover 3236 km - the distance between all of the Greek islands featured on our holiday programme - starting in Corfu we will be running, walking, cycling, stepping and skipping towards our finish line in Skiathos.

Donations can be made online at: https://uk.virginmoneygiving.com/SomeoneSpecial/IsmetEmin

It's Day One of our Ultimate Island Hop and the starting point is the Ioanian island of Corfu. With its unsurpassed natural beauty, and one of the greenest and most fertile islands, displaying traces of its turbulent history, old monuments and places of exquisite beauty, unique architecture and style, Corfu has welcomed holidaymakers long before any of the other Greek islands.

With our colleagues poised on their virtual starting lines, we begin our island hop in Corfu Town, very different from all other Greek towns as the result of successive years of Venetian, French and British rule. On your marks, get set and GO!

As we reach Corfu's southern peninsula, it's clear that our colleagues are clearly up for the challenge. Just an hour by sea from Corfu is an amazing haven of peace and beauty. Paxos is a tiny island, approximately seven miles long by three miles wide, with over 30 white pebbly beaches and crystal clear blue sea. There are a series of enchanting coves along the east coast, best explored by boat. An island of outstanding beauty, holidays here offer an unhurried way of life, ideal for those wishing to escape the hustle and bustle of the modern world. 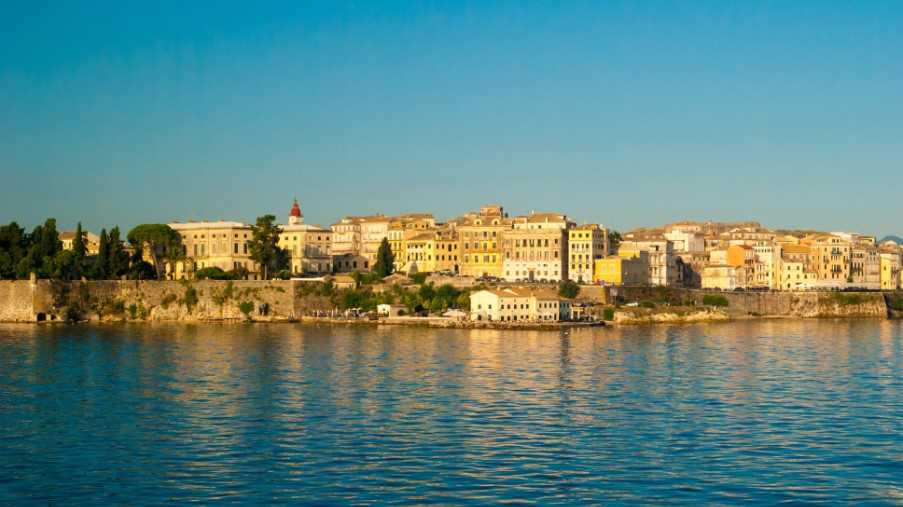 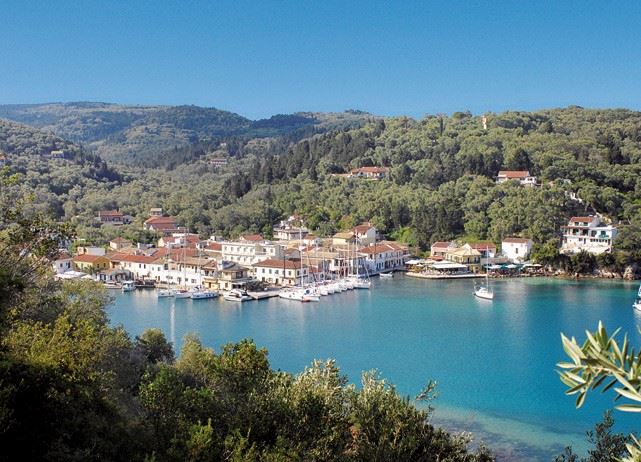 We have been cycling, running and jogging the length of Paxos and now our next island destination is Lefkas. Lefkas, or Lefkada as its also known, is one of the Ionian chain of islands that lie just off the west coast of mainland Greece.

Like most of the Ionian islands the best beaches are found on the gently sloping east side. The west coast of Lefkas is mostly sheer cliff although there are notable beaches on the south-west at Porto Katsiki and a clutch to the north-west around Agios Nikolaos The main Lefkas beach resorts are at Nidri on the east coast and the noted windsurfing beach at Vassiliki to the south. The waters on the eastern shoreline are very sheltered and the deep bays are a popular stop for yacht flotillas. Increasingly popular are the islets that lie of the southern coast of Lefkas such as Meganissi - the next stop on our ultimate island hop.

Meganissi lies about six kilometres south-east of the Lefkas port of Nidri and so attracts plenty of day trippers from it's much larger neighbour, it is also popular with long-stay visitors looking for a laid-back Greek island holiday. It is one of a cluster of islets that sit between Lefkas and the Greece west coast that includes Skorpios, once the private island of the Greek billionaire Aristotle Onassis. Ironically, Meganissi means 'large island' in Greek but it measures only 20 sq km while the island's population of around 1,200 mostly living in the three island hamlets of Katomeri, Vathi and Spartachori. The island has an enticing coastline, with many deep and long, fjord-like inlets especially on its northern shores and on its rocky and rugged west coast.

With tired legs we have reached 172.2km of our challenge so far! 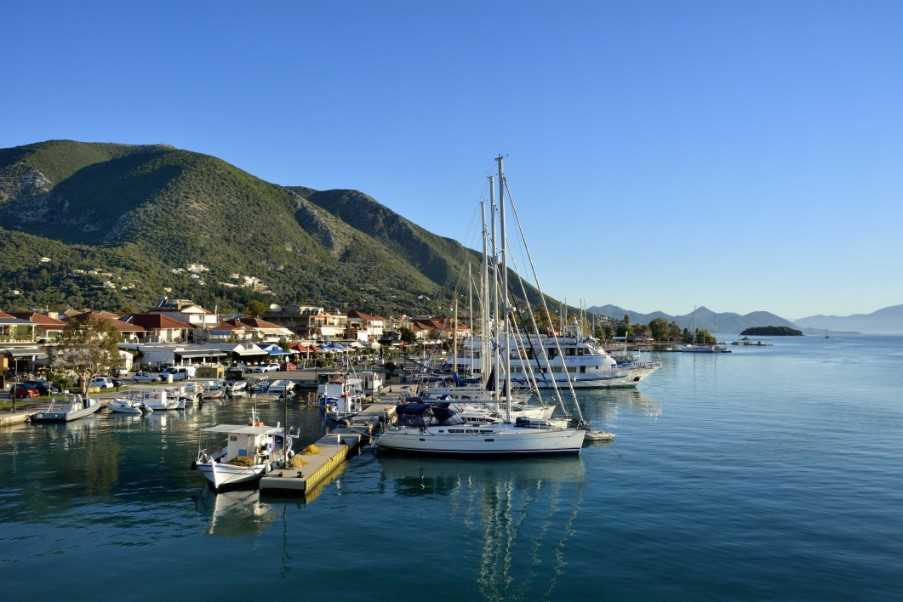 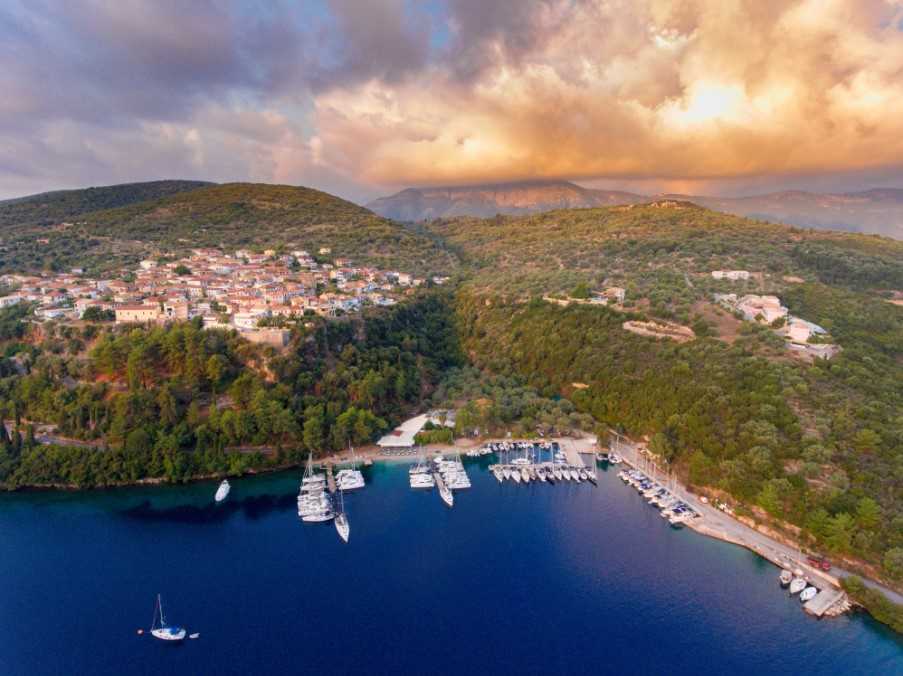 With a good nights sleep and one of our colleagues completing an incredible 46km bike tour, we now reach the island of Ithaca. This tiny, magical island will fill you with inspiration through its stunning scenery, rich history and beautiful beaches. The capital of Odysseus' kingdom, Ithaca's unique landscape is also legendary. Wooded landscapes, hidden coves, traditional hamlets and quaint harbour villages like Kioni and Frikes make the island perfect for visitors seeking reflection and tranquility.

The team are literally racing through the early stages of the challenge and we cannot believe that we already have Kefalonia in our sights. Famously known for the location of the film 'Captain Corelli's Mandolin', Kefalonia is the largest of the Ionian islands - not that this is going to deter our team. This beautiful island will seduce visitors with its charm and choice of places to visit from north to south. Discover the chic and cosmopolitan harbour town of Fiscardo, the only village left standing following the devastating earthquake that struck in 1953. The gorgeous Melissani cave in Sami as well as Assos village, located at the picturesque peninsula of the same name. As I'm sure our team would appreciate right now, why not try the island’s renowned Robola wine, made using a local grape variety.

The team have now arrived in Zakynthos or Zante as the island is known in Italian. Here you’ll discover picturesque hilltop villages, traditional monasteries, and dreamy natural landscapes. What’s more, the exotic beaches are home to the endangered sea turtle species Caretta-Caretta, which every year hide their eggs in the fine white sand of Zakynthos beaches. Time to move on and to board the ferry to Kythira. 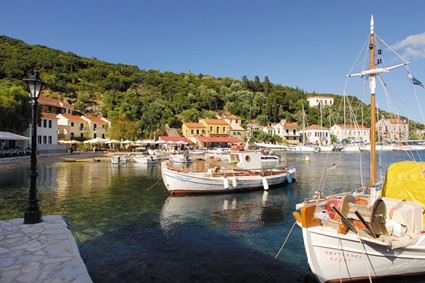 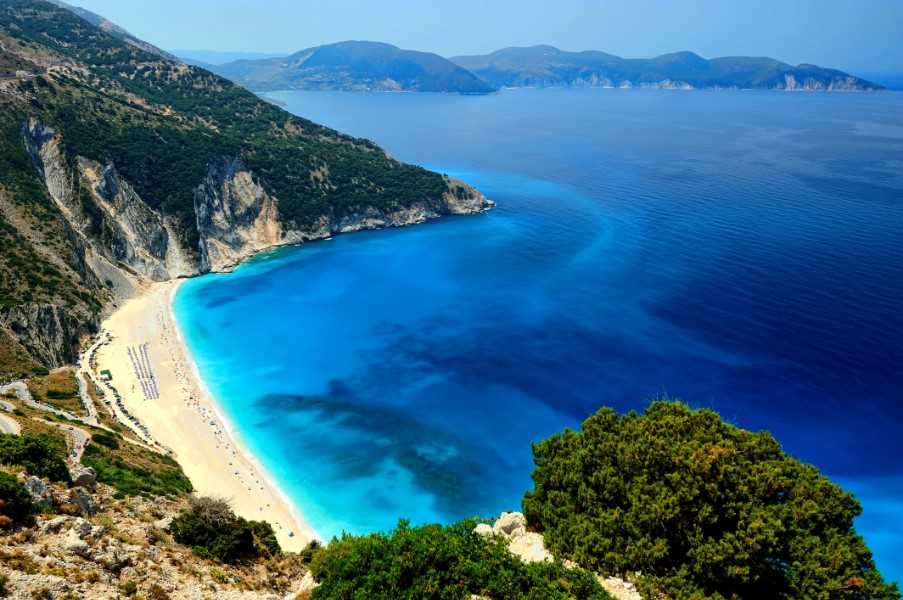 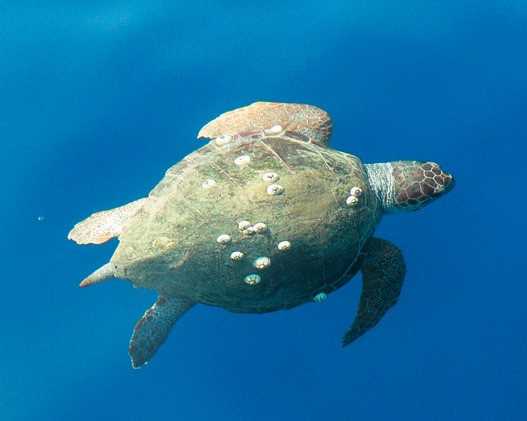 It's Day 3 of our island hop challenge and we have reached the birthplace of Aphrodite, the goddess of love and beauty, Kythira. This island that bestows all the virtues of Aphrodite, officially belongs to the Ionian islands, but it is located much further south at the southern tip of the Peloponnese at the mouth of the Laconian Gulf. Although Kythira has no mountains, it has a hilly landscape with many fertile valleys. The eastern side of the island mostly slopes down gradually to the sea ending at some beautiful beaches. This in contrast to the western side which often descends with a spectacularly steep drop into the Ionian Sea.

The team are really in their stride and whether it's a jog around their local park, cycling along the Thames or simply taking the dog for a walk, they are have already covered a great distance and show no signs of slowing down. So as we head into Day 4, we push on towards Crete.

Crete, the largest Greek island and also the southernmost island in Europe really does have it all. Mountain villages, quaint harbour towns and the long sandy beaches offer tranquil locations to swim in the azure-blue seas. It also has a magic radiance. There is the supreme quality of the light here, the sharp rugged mountains meeting openly with clear seas. There is an abundance of wildlife, plants and flowers that are unique to the island. Breath in the ever-present scents of wild herbs, taste fresh fruit, the best of the world’s olive oil and healthy, delicious cheeses. No other place in Greece can delight the senses of smell and taste like Crete and no better place to complete the first leg of our Ultimate Island Hop in memory of our dear friend Issy. 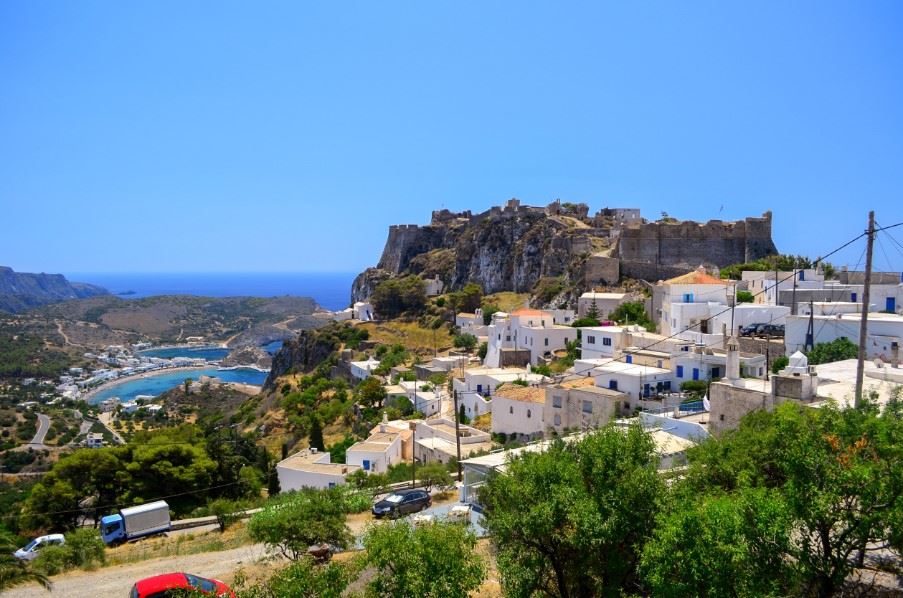 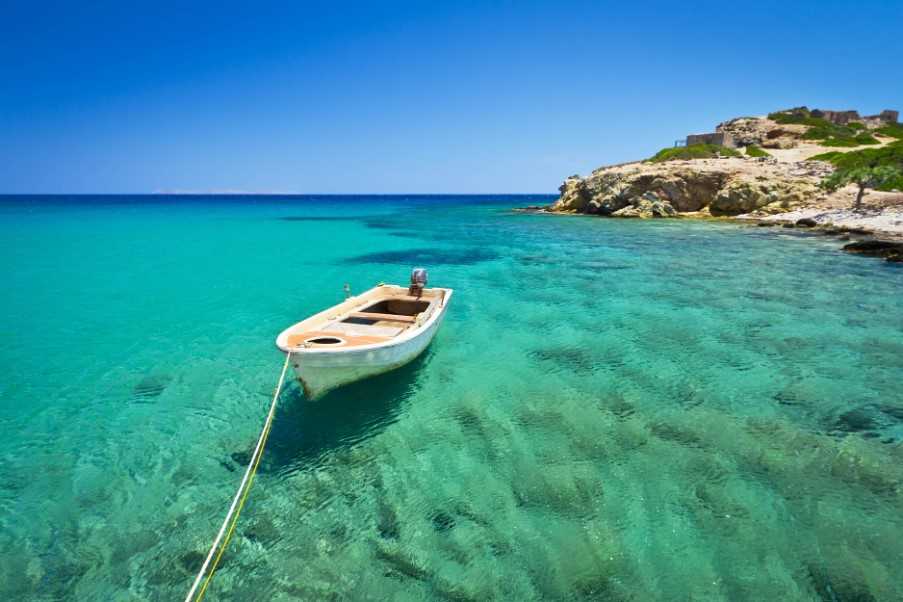 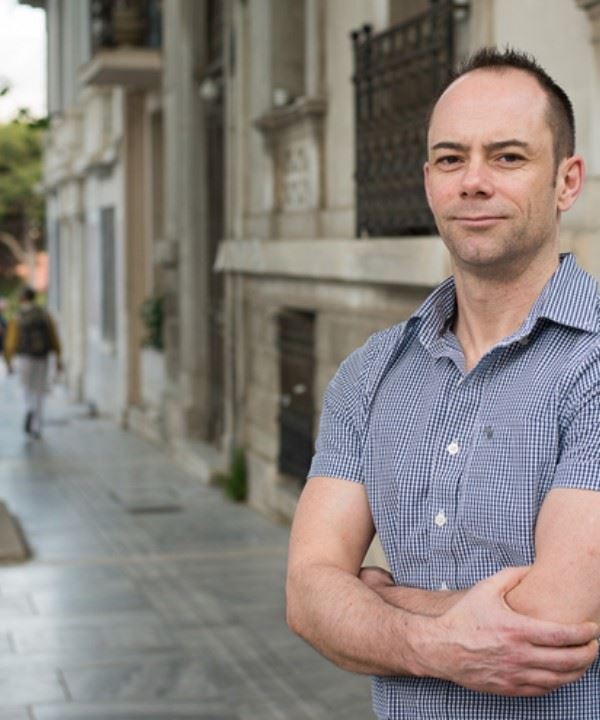 Other posts from Chris Wright

Chris is the Sunvil Group’s managing director and is not only responsible for the overall running of the company, the welfare of its staff, the fabric of the building, the efficient working of its computer systems but also for overseeing and contracting much of the accommodation on the GIC The Villa Collection programme. He is a very hands on managing director, a friend and helper to all, mad on aircraft and indefatigable. Chris joined The Greek Islands Club in 1993, after two years running a scouts’ holiday camp in Wales. He was responsible for maintaining The Club’s sailing boats on Paxos and generally acting as a rep for the villas. Sunvil Inherited Chris on purchasing GIC in 1998 and his abilities were quickly realised. He well deserves the top job.