A trip to the Azores

A guest blog by Andre Ashford.

I was recently fortunate to visit three of the islands in the Azores on a familiarisation trip, hosted by specialist tour operator Sunvil.

Where are the Azores?

The Azores are situated approximately 1500km off the coast of Portugal, in the Atlantic Ocean. If you were to find Madeira on a world map, look north-west and there you will find the nine islands that make up the Azores.

Discovered in the 15th Century by Portuguese navigators en route to the Americas, the Azores remain a Portuguese territory and also use the Euro as their currency.

Expect the winter months to bring temperatures of around 13-15°c, and a gentle warmth in the low 20s during the summer. Even in mid-October it is not unusual to be sporting only shorts and t-shirts most days, and perhaps a fleece when venturing to the higher points on the islands.

How do I get there?

There are currently two direct flights leaving from the UK every week. One of these is a Saturday flight departing from London Gatwick with SATA Azores Airlines, the national carrier. The second of the flights is operated by Ryanair, who have recently introduced a weekly flight from Stansted, also on a Saturday.

A direct flight from the UK to the main island of Sao Miguel takes around 3 hours and 30 minutes, so the Azores archipelago is a lot closer than many people may think.

Who are The Azores suitable for and what is there to do?

It would be fair to say that the Azores is not a destination suitable for those seeking golden beaches, 4 and 5 star hotels and all-inclusive packages. However, if you have a passion for the great outdoors, then it is very much for you.

Activities abound in great variety and include: walking, cycling and mountain biking, jeep and driver guided tours, bird watching, whale watching, swimming with dolphins, diving and canyoning to name but a few.

Sao Miguel is the largest of the Azorean isles and is home to around 140,000 people, making up over half the total population of the nine islands. It is difficult to do more than merely scratch the surface of the offerings of Sao Miguel in a short stay. Head to the capital city on the island, Ponta Delgada, where you will have a chance to ride Tuk Tuk’s along the cobbled streets, sample local delicacies at the city’s restaurants and to view the historical Portuguese architecture. Ponta Delgada is the starting point for many of the island’s excursions and the transportation hub; as such it is the perfect base for those who do not want to hire a car.

Sights on Sao Miguel that should not be missed include Lagoa do Fogo (fire lake), a natural lake in the crater of the Agua de Pau volcano and an excursion to Sete Cidades, an extinct volcano crater of around 40 sq km, within which sit two magnificent lakes, one deep blue in colour and one an emerald green. A visit to Furnas also provides the opportunity to visit the Terra Nostra Botanical Gardens, and a chance to enjoy the amazing natural Thermal Pool. 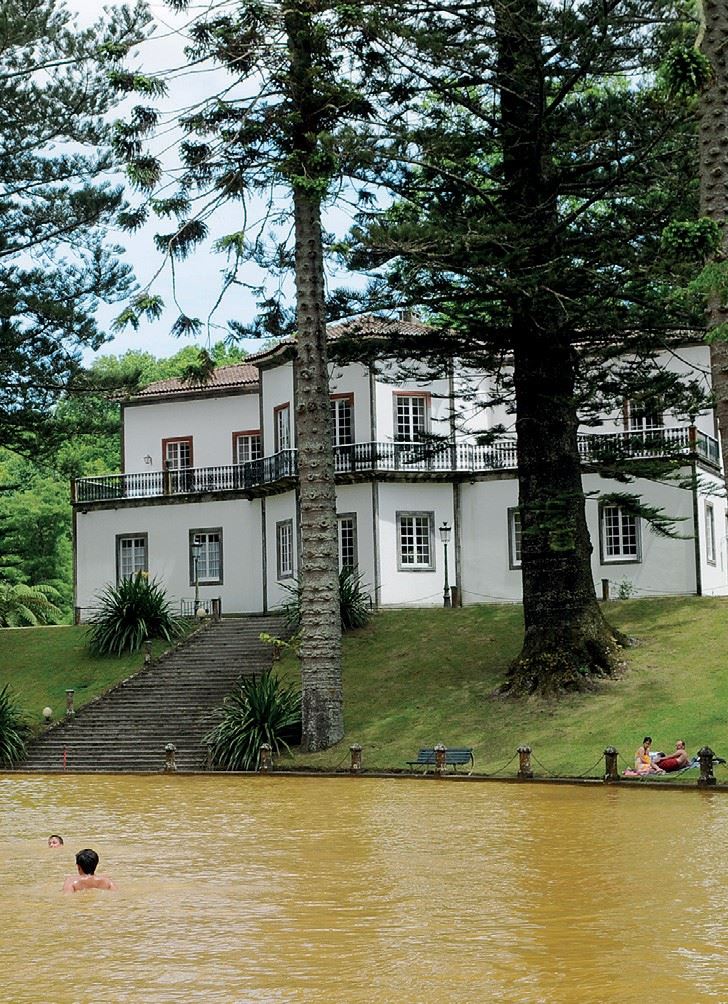 A flight over to Faial from Sao Miguel takes a mere 40 minutes. The island is known as the Blue Island and includes the main town of Horta, itself a transatlantic harbour. The landscape of Faial is dominated by its vast Caldeira (volcanic crater), with the last explosion occurring here in 1957.

In many ways, when taking a tour around the island, the landscape is somewhat reminiscent of parts of Cornwall and even New Zealand in some small instances.

A 30 minute ferry journey from Faial, sits ‘The Grey Island’ of Pico. Pico too is dominated by its volcano which, at 2,351 metres, is the highest point in Portugal. The island is also home to the Verdelho grape, which is used to produce the wine that the island has become famous for. The vineyards of Pico are inscribed on UNESCO’s World Heritage List. 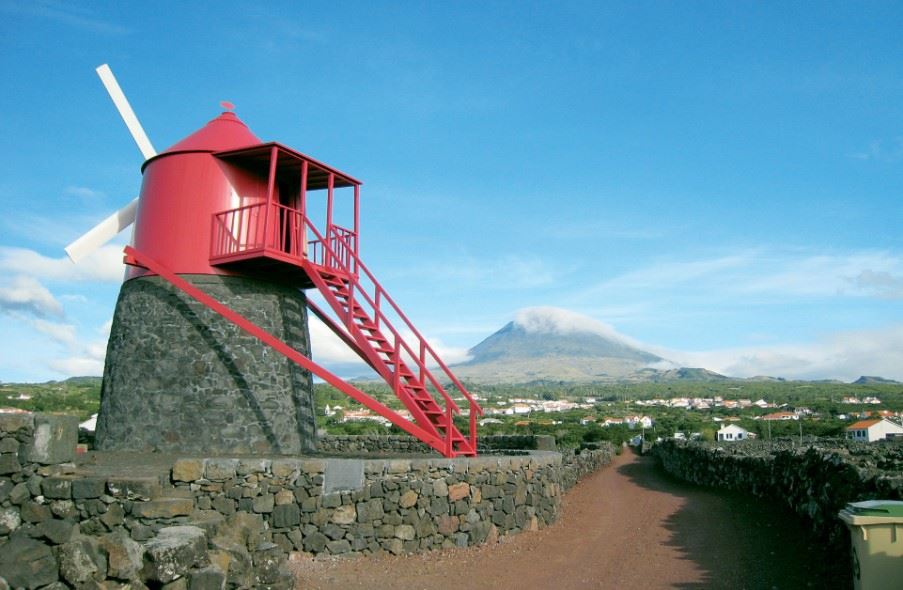 When planning a day’s itinerary, it is worth remembering that the weather in the north of the island can be in stark contrast to that in the south. A visit to the Museu dos Baleeiros in Lajes do Pico gives a fascinating insight into the island’s long history of open boat whale hunting, an activity which was banned in 1987 and which has now been replaced by whale watching.

There is an excellent range of 3 and 4 star hotels along with the more intimate Quintas – smaller, boutique style properties. The islands also offer a range of self-catering properties.

A highlight on Sao Miguel is the Azoris Royal Garden Hotel. The 4-star hotel’s central location is a pleasant 10 minute walk to the Port area and main shopping district. 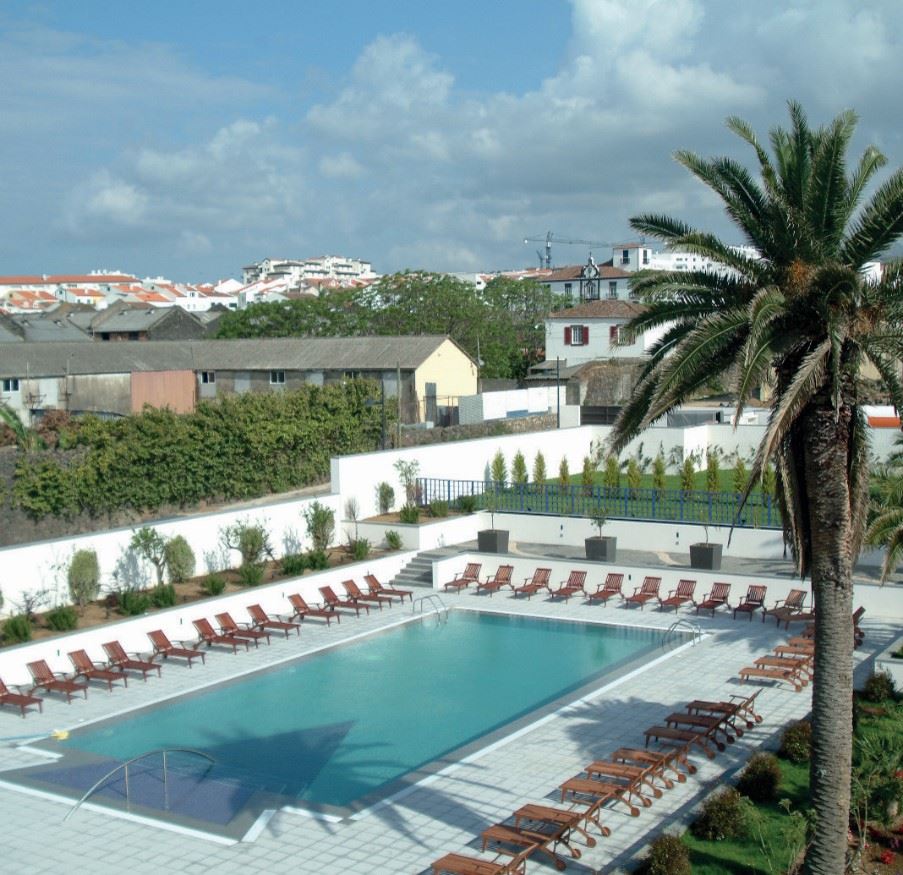 On Faial, the Hotel do Canal again boasts a prime location opposite the Marina. Another hotel of note here is the Pousada Forte da Horta, with its views towards Pico Island.

The Hotel Caravelas is a wonderful option on Pico, a stones throw from where the ferry docks.

Wild landscapes of Svalbard – a photo post Boutique Greece Winter holidays in Swedish Lapland Notes from the field - Sao Tome and Principe 5 day trips from Copenhagen Wildlife wonders of Costa Rica
Notes from the field - Swedish Lapland in June Highlights of Lazio 7 Facts about the Northern Lights Stockholm: An affordable city break Beating the colossal crowds at the Colosseum in Rome The ICEHOTEL celebrates its 31st anniversary Birds of Latin America – Colouring Page Illustrated Map: The Wine Growing Regions of Portugal 5 reasons to visit Panama Take a walk around Oslo with Sunvil Island hopping on Sweden’s west coast 5 Ideas for Spa Breaks in Portugal Our 10 Best things to do in Florence, Italy Highlights of Rome Their race has finished, let your Latin America journey begin UNESCO World Heritage Sites in Latin America Introducing the Art Suite designs for the 26th ICEHOTEL in Swedish Lapland Our top 5 destinations for wine lovers Where to go on holiday in September Where can Sunvil take you this spring? Climbing Pico, Portugal’s highest mountain Whale & lava wine… Pico Island. Part Three. Travel to and within Europe from 01Jan21 A parting shot or two (to Faial). Part Four. All for the love of travel | My Azores - Sue John A three-island holiday in the Azores: Sao Miguel - Terceira - Sao Jorge The Azores... what not to miss A green light to head into the red zone. Part One The Coronavirus | The Azores The Azores and their long connection with cheese Where to go on holiday in August