The Azores and their long connection with cheese 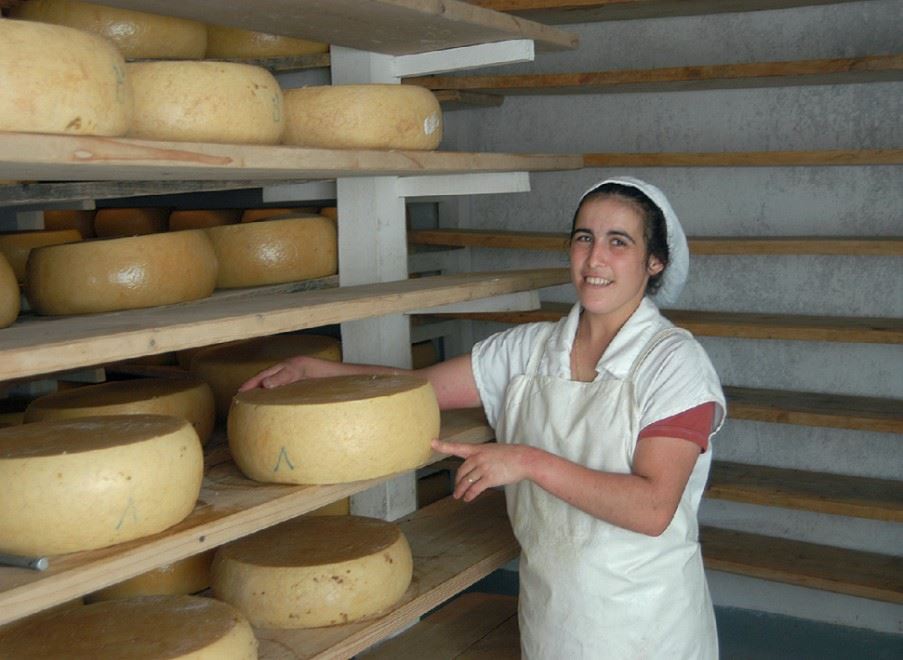 Few visitors who plan a holiday in the Azores do so because of the islands’ culinary reputation, but the islands are well known around Portugal for the quality of their cheese. While cheeses in mainland Portugal are typically made with milk from sheep and goats, Azorean cheese is mainly produced from cow’s milk.

The history of cheese production in the Azores can be traced back to the time when the islands served as a vital stopping off point for ships sailing west to the Americas and south towards the Cape of Good Hope and on to India and the Far East. It was Flemish settlers, invited to the islands by Henry the Navigator in the 15th century, who first introduced cattle and began the islands’ first cheese making efforts. The procession of passing ships needed food which would last many days at sea, and being the excellent merchants that they were, the Azoreans produced good, hard cheeses which would stay tasty for several weeks.

Even now, cheese in the Azores is largely an artisan business, and production is concentrated in the winter months (some say that it’s important to make the cheese with cold hands). Each island has its own style of cheese: Pico makes a dense, soft cheese with a smoky flavour; Graciosa cheese is known for its spiciness; the hard Flamengo variety is made on Faial.

Perhaps the best-known of the Azorean cheeses is Queijo da Ilha (Island Cheese) from the island of São Jorge. It comes in many forms, from a young delicate flavoured variety which works well as a topping on baked potatoes and pasta dishes, to a mature, extra strong cheese which has a reassuring smelliness and a punchy taste not unlike a good, strong cheddar. Some attribute the cheese’s distinctive sharp flavour to the fact that the cows graze on the island’s fertile volcanic slopes. Ilha cheese is often served as a dessert along with fruit, and is well matched with a full-bodied glass of port or Madeira wine.

When buying cheese, look out for the designation of Denominação de Origem Protegida (DOP) or Protected Designation of Origin. This stamp confirms that the cheese has been produced within the designated region using traditional methods and ingredients. The main cheese dairies on the islands will usually welcome visitors with prior warning, and hotels can often make the necessary call. And for those who take a tour and are tempted to buy a full Queijo da Ilha on your visit to the Azores, bear in mind that it can weigh up to 10kg, so make sure there’s plenty of spare space in the suitcase!

Ryanair and The Azores Start of the 2018 holiday season Celebrating 25 years of operating to the Azores Wildlife of the Azores The Azores - Guest Blog by Mary Novakovich Six flights, three islands and a blue whale.
Where to go on holiday in September Where can Sunvil take you this spring? February 2017 Sunvil Supper Club – Feijoada Choco Dot com or dot con? Don’t be a victim of holiday fraud Highlights of Northern Portugal Algarve beyond the beach resorts Sagres – the end of the world The Queen’s 90th Birthday: A Royal Visit February 2016 Sunvil Supper Club – Fish and Shellfish Cataplana June 2016 Sunvil Supper Club – Octopus à lagareiro Houseboat rental on the Alqueva reservoir Highlights of Central Portugal (Centro) Culinary delights of the Alentejo region of Portugal Marvao - a marvellous hilltop fortress Discover the Alentejo: An Illustrated Map The Gentle Rhythms of the Alentejo Countryside- A guest blog by Benedict Allen EU referendum: What effect will the result have on your 2016 summer holiday? All for the love of travel | Looking forward Highlights of Aveiro – the Venice of Portugal Where to go on holiday in March The Michelin Star of the North Alentejo Wine routes Evora - my impressions of this beautiful city. Guest blog by Jo Rogers All for the love of travel | Portugal Highlights of Lisbon All for the love of travel | Our 50th birthday All for the love of travel | Family time in the Algarve All aboard! Sunvil’s top 8 railway journeys throughout Europe and Latin America.  The Coronavirus | Airports Where to go on holiday in June Portugal... what not to miss Aldeia da Luz: The village that moved Where to go on holiday in October Mertola and the Mina de Sao Domingos Our top five scenic fly-drive holidays Notes from the field – Northern Portugal Alentejo for foodies The Alternative, Real Algarve Extremadura - a hidden treasure in western Spain bordering Portugal Portugal Passenger Locator Card The Rota Vicentina Booking a holiday IS legal Green means go. Amber means...? Read more inside The Algarve – Our Top 10 Cultural attractions Pastel de Nata – more than just a dessert All for the love of travel | Dreaming of our post-lockdown travels Tips for travelling post-lockdown The Coronavirus | Portugal Exploring the Douro Valley in Portugal Where to go on holiday in January All at Sea... looking for leviathans. Part Two. 10 things you didn’t know about the Azores Notes from the field – the Algarve A look forward to summer 2021 Discover the real Madeira Highlights of the Algarve Alentejo for Culture Vultures The Alentejo - hidden Portugal Zambujeira do Mar: the delights of Portugal’s Alentejo Coast The Coronavirus | The latest news and advice Alentejo - Guest Blog by Mary Novakovich Where to go on holiday in July Our top 5 destinations for wine lovers Azores, Cascais and Lisbon – a family adventure by Emma Macfarlane Spring forward to one of our many favourite destinations in 2018 Illustrated Map: The Wine Growing Regions of Portugal The most westerly island of Europe: Flores, a hiker’s paradise Top 7 attractions of the Azores Put quite simply the Azores are stunning The Coronavirus | The Azores A trip to the Azores Notes from the field: Sao Miguel - Pico - Faial Where to go on holiday in August Whale & lava wine… Pico Island. Part Three. Climbing Pico, Portugal’s highest mountain A parting shot or two (to Faial). Part Four. All for the love of travel | My Azores - Sue John A green light to head into the red zone. Part One The Azores... what not to miss A three-island holiday in the Azores: Sao Miguel - Terceira - Sao Jorge Travel to and within Europe from 01Jan21