All for the love of travel | My Azores - Sue John

The Azores, nine volcanic islands in the middle of the Atlantic, have been described as Europe’s best kept secret. One could not disagree but, I would give them another accolade and that is they are also one of the most underrated destinations in Europe.

Sunvil has been featuring this little-known Portuguese archipelago since 1990. Up until 2005, the only route from the UK was via Lisbon which almost made the islands more alluring. My first visit was in 2003 and I confess to have been a little disappointed. The weather was warm but wet with poor visibility and all the wonderful sights that I had been promised, had disappeared into the clouds.

I was soon to learn that the Azores should never be pre-judged or underestimated. Be patient and all will be revealed.

I returned the following year, twice in fact. Lessons learnt; I was hooked.

It is actually hard to imagine a more scenic and dramatic destination being just under 4 hours away. These stunning, sub-tropical islands will never cease to amaze you with their hidden crater lakes, hot springs, botanical gardens, quaint fishing villages and eco-friendly ethics.

A couple of years later, I was on the inaugural direct flight from Gatwick which Sunvil was proudly involved in. We touched down in Ponta Delgada to a water salute and a very enthusiastic reception, it was just a privilege to be part of such a significant moment.

Over the years, I have explored the entire archipelago, each island is unique, individual and beckoning you to visit them. A standout highlight for me is, what can only be described, as an eruption of blue hydrangeas during the summer months giving a truly spectacular show across the islands. The view from the islands of Faial and Sao Jorge across the water to Mt Pico, a towering dormant volcano cone peeking out above the clouds is another memorable sight.

There are no busy resorts on these islands, this is a land for nature lovers, walkers, and outdoor enthusiasts. As a result, the Azores has become one of the most sustainable nature-based island destinations in the world. Budget airlines have recently made them more accessible but, thankfully, it has done nothing to detract from their indisputable charm.

Returning from a trip, I would talk enthusiastically about what I had seen and experienced. My husband, David, finally said it was time he checked it out for himself. A Busman’s Holiday perhaps? no, a glorious week walking, whale watching and soaking up the geological highlights of Sao Miguel. It was lovely to be able to show him a destination that has become so special to me. However many times I visit I will always find something new and exciting. Last October I made my 21st visit, I know it won’t be the last.

Sue and David in the Azores 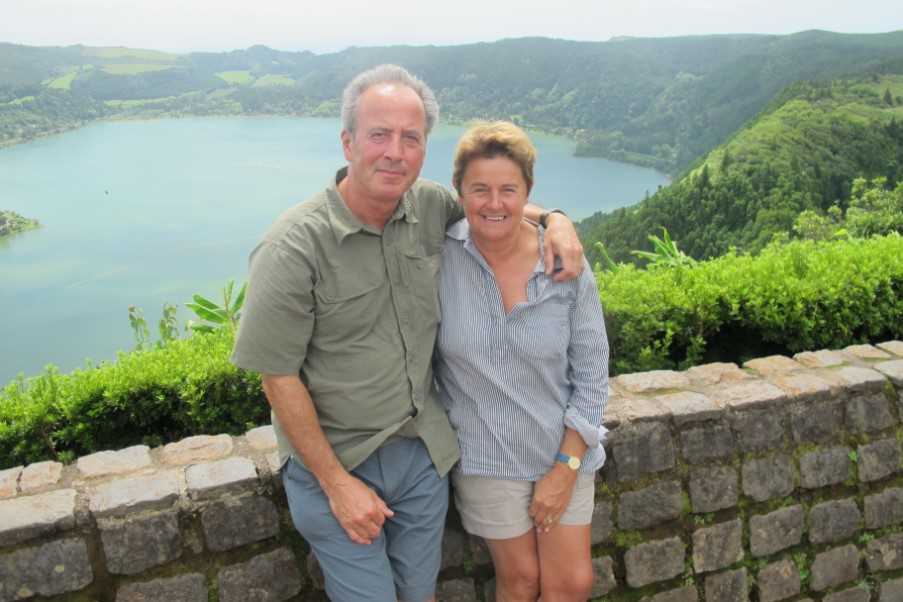 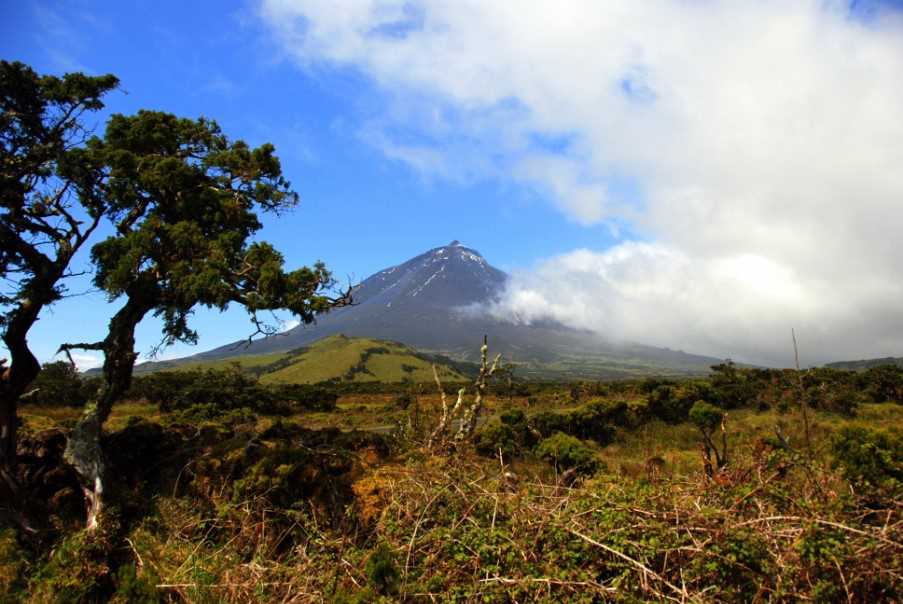 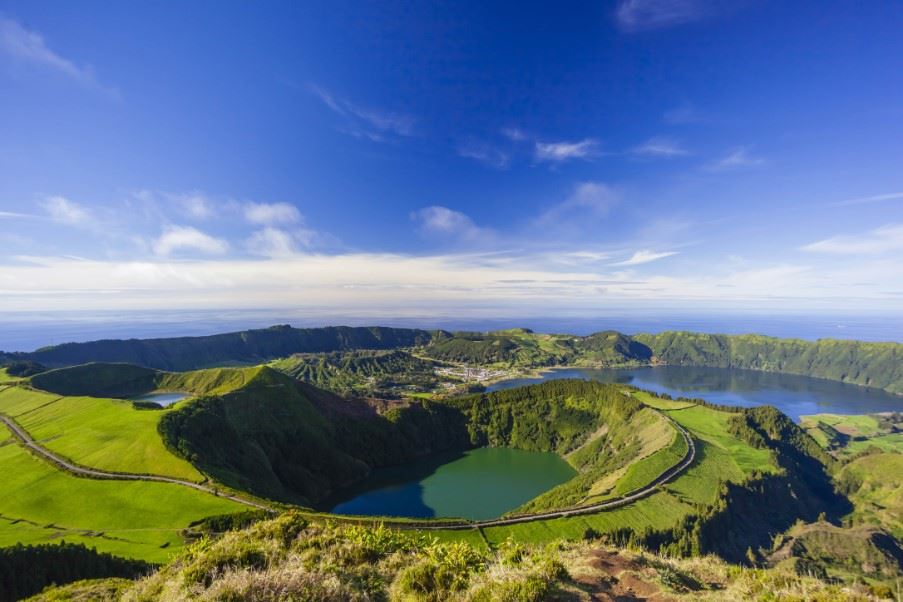 February 2017 Sunvil Supper Club – Feijoada Choco Dot com or dot con? Don’t be a victim of holiday fraud Highlights of Northern Portugal Algarve beyond the beach resorts Sagres – the end of the world The Queen’s 90th Birthday: A Royal Visit
February 2016 Sunvil Supper Club – Fish and Shellfish Cataplana June 2016 Sunvil Supper Club – Octopus à lagareiro Houseboat rental on the Alqueva reservoir The Coronavirus | Airports Highlights of Central Portugal (Centro) Culinary delights of the Alentejo region of Portugal Marvao - a marvellous hilltop fortress Discover the Alentejo: An Illustrated Map The Gentle Rhythms of the Alentejo Countryside- A guest blog by Benedict Allen EU referendum: What effect will the result have on your 2016 summer holiday? All for the love of travel | Looking forward Highlights of Aveiro – the Venice of Portugal Azores, Cascais and Lisbon – a family adventure by Emma Macfarlane Where to go on holiday in March The Michelin Star of the North Alentejo Wine routes The Coronavirus | Portugal Evora - my impressions of this beautiful city. Guest blog by Jo Rogers All for the love of travel | Portugal Highlights of Lisbon All for the love of travel | Our 50th birthday Spring forward to one of our many favourite destinations in 2018 All for the love of travel | Family time in the Algarve All aboard! Sunvil’s top 8 railway journeys throughout Europe and Latin America.  Where to go on holiday in June Portugal... what not to miss Aldeia da Luz: The village that moved Where to go on holiday in October Mertola and the Mina de Sao Domingos Our top five scenic fly-drive holidays Notes from the field – Northern Portugal Illustrated Map: The Wine Growing Regions of Portugal The most westerly island of Europe: Flores, a hiker’s paradise The Coronavirus | The latest news and advice Alentejo for foodies The Alternative, Real Algarve Extremadura - a hidden treasure in western Spain bordering Portugal Portugal Passenger Locator Card The Rota Vicentina Booking a holiday IS legal Green means go. Amber means...? Read more inside The Algarve – Our Top 10 Cultural attractions Pastel de Nata – more than just a dessert All for the love of travel | Dreaming of our post-lockdown travels Tips for travelling post-lockdown Exploring the Douro Valley in Portugal Where to go on holiday in January Top 7 attractions of the Azores All at Sea... looking for leviathans. Part Two. 10 things you didn’t know about the Azores Notes from the field – the Algarve Put quite simply the Azores are stunning A look forward to summer 2021 Discover the real Madeira Highlights of the Algarve Alentejo for Culture Vultures The Alentejo - hidden Portugal Alentejo - Guest Blog by Mary Novakovich Where to go on holiday in July Our top 5 destinations for wine lovers Where to go on holiday in September Where can Sunvil take you this spring? Climbing Pico, Portugal’s highest mountain Whale & lava wine… Pico Island. Part Three. A three-island holiday in the Azores: Sao Miguel - Terceira - Sao Jorge The Azores... what not to miss A green light to head into the red zone. Part One A trip to the Azores The Coronavirus | The Azores Where to go on holiday in August Travel to and within Europe from 01Jan21 A parting shot or two (to Faial). Part Four. The Azores and their long connection with cheese