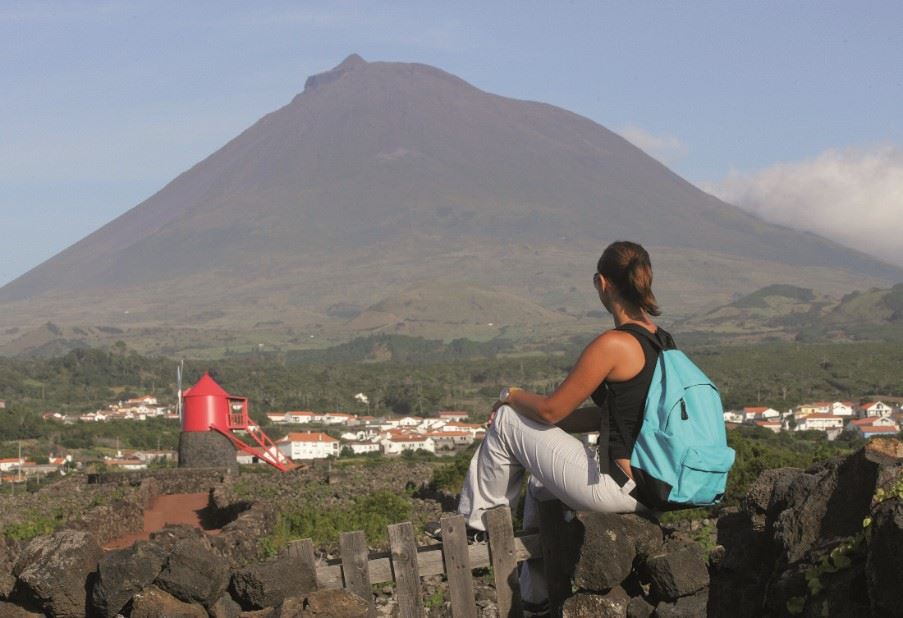 The sight of a mountain, especially a classic volcano which rises sharply from the sea to a conical peak, is one that for most of us is something worth travelling to witness. But for many people merely standing at ground level and enjoying the view of the mountain is not enough: mountains are there to be climbed and the only view worth shouting about is the one from the summit.

And so it is with Pico, at 2350 metres (7713 feet) the highest point in Portugal. The climb is within the capabilities of most people who are fit and used to strenuous hikes; no technical gear is required and it’s perfectly possible to go up and down in a single long day. While 2350 metres is a serious height for anyone more used to climbing the modest British mountains and fells, what makes it considerably easier is the fact that the only marked trail to the summit begins around halfway up Pico, at around 1200 metres – so what you’re left to do in terms of altitude is somewhere between that of Scafell and Ben Nevis.

The path is steep, constant and well marked, with guide posts positioned every 100 metres along the trail. The chance of cloud coming in and obscuring the path ahead is very real, so the posts are an essential tool in negotiating the mountain safely. The ascent typically takes around 4 hours and while it’s pretty much a relentless climb you’ll see volcanic features such as caves, steam vents and lava tubes along the way, which are worth stopping to admire while you catch your breath for the next stretch.

Being a volcano the ground underfoot is made up of fine gravelly stones and becomes quite slippery as the path steepens near the summit. Great care is needed, as a fall on this type of surface can cause a lot of damage.

There’s no crater lake at the top – all that waits for you is a feeling of satisfaction and, if you’re lucky, a spectacular view across the whole island of Pico and the surrounding Atlantic Ocean.

Having wrapped up with all your layers to stay warm at the summit, you’ll soon start shedding them again as you turn for home. The descent takes a similar time to the ascent, with particularly slow going on the first stretch where small careful steps are needed to avoid a tumble. All in all the hike takes around 8-9 hours, so it’s wise to set off as early as possible and allow plenty of time without worrying about the light. Expect stiff limbs for the next few days to go with that sense of achievement.

No permits are required to climb Pico, but it’s compulsory to sign in at the parking lot and sign out again to indicate that you’ve returned safely.