Discovering Gothenburg and a case of poor maths

Gothenburg is a compact city and you can get around on foot, but if you have a city pass you can make the most of it by travelling by public transport. Or you can hire a bike and see the city from different perspective – why not make your life easier? 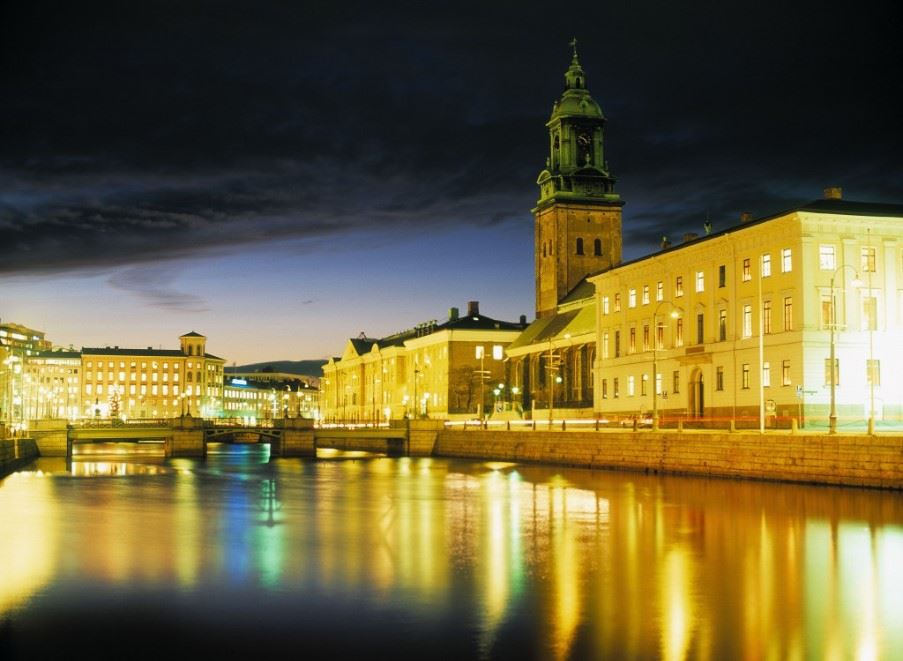 It seems that in Gothenburg people were not good at maths. There is quite a bit of evidence of this:

The house number 17½ in St. Nyg: when numbering the house along the street the owner of the building realised that there was an extra  doorway but one available address, so the solution was that the extra house would be numbered 17½.

The Osthyveln (“cheese slicer” bridge), which is so low you need to duck down if you do not want the bridge to hit your head.

The ship Vikings moored at Lilla Bommens Torg was bought from Denmark at the end at the 1800s, but since 1966, when the Älvsborg Bridge was built, the boat has been trapped in the harbour. The reason is that the Viking’s tallest mast is 10 meters higher than the bridge, so it is impossible for the ship to take to the seven seas without destroying its masts. Today the ship hosts a hotel, conference centre and restaurant.

It’s worth climbing the Läppstiftet (Lipstick) in Lilla Bommens, as from the 22nd floor you can enjoy a 360° view of Gothenburg and its surroundings.
The lipstick tower and old Viking ship at Lilla Bommen 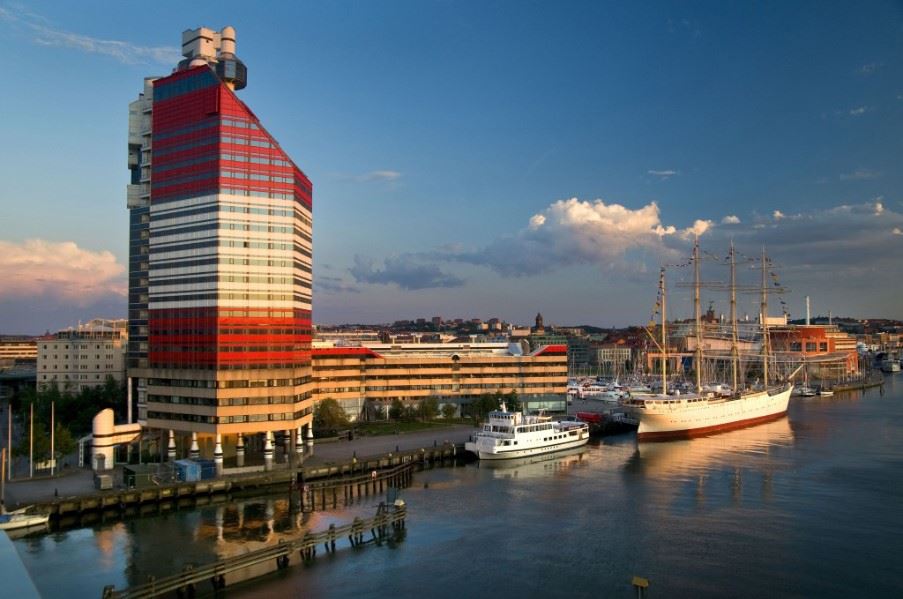 A walk through Haga is worthwhile. It is an old neighbourhood dating back to late 1800s, developed by those people who could not afford to build a stone house within the fortified wall of the city. Many wooden houses from that time have been preserved until now. Today it is a fancy district with loads of café, antiques and design shops. 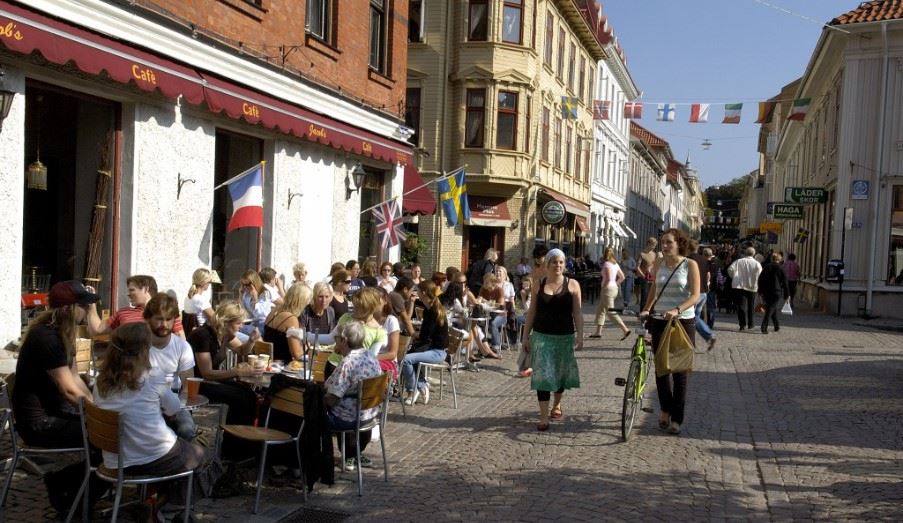 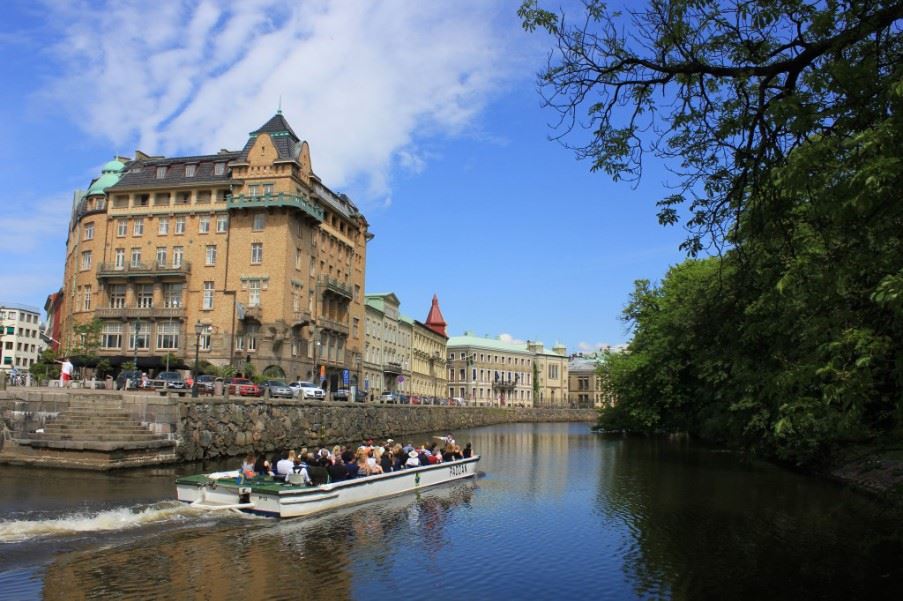 Take the ferry across Eriksberg, which sits on the north bank of the river. It is an area that originated in 1850 and has had a long history of shipbuilding. Today is a new residential area with lots of cafés, restaurants and theatres, and is well worth a stop for a coffee or ice cream on the piers by the river.

Alternatively on a sunny day do what the local people do: travel on the tram No 11 up to Saltholmen and from here catch the ferry boat across one of the islands of the southern archipelago of Gothenburg. As these islands are car free, you can chill out by cycling or strolling around, having a swim, or having a nice picnic while enjoying the scenery. Food wise, you can have a light snack at the Heaven 23 in Korsvagen; it seems that they have the best shrimp sandwiches in all of Gothenburg.

Otherwise have a proper Swedish meal at Smaka restaurant, near Vasaplatsen. Open from 1994, it serves home-made Swedish food in a homely atmosphere. I had a tray of herrings with crispy bread and meatballs with mashed potatoes and lingonberries.

Travel to and within Europe from 01Jan21 Dot com or dot con? Don’t be a victim of holiday fraud Winter holidays in Swedish Lapland Falsterbo: the Swedish Riviera Is Kiruna in Sweden really the world’s largest city? The Queen’s 90th Birthday: A Royal Visit
The Coronavirus | Airports Notes from the field - Swedish Lapland in June Highlights of Swedish Lapland Get closer to nature with a new direct flight from London to Lulea, Swedish Lapland 7 Facts about the Northern Lights EU referendum: What effect will the result have on your 2016 summer holiday? All for the love of travel | Looking forward An exciting glimpse of this year’s ICEHOTEL suites Stockholm: An affordable city break Swedish Lapland: Guest Blog by Mary Novakovich Utö – a Swedish island escape Stockholm for free – 6 museums in the Swedish capital with no admission charge Highlights of West Sweden All for the love of travel | Our 50th birthday Spring forward to one of our many favourite destinations in 2018 The ICEHOTEL celebrates its 31st anniversary November 2016 Sunvil Supper Club – Janssons frestelse All aboard! Sunvil’s top 8 railway journeys throughout Europe and Latin America.  The ICEHOTEL celebrates its 30th anniversary Where to go on holiday in June 8 Northern Lights Facts: An Infographic Why you should make the trip to Sweden in March Gotland – Sweden’s Holiday Island Hidden Gothenburg Autumn escapes The myths and legends of the Northern Lights Highlights of Gothenburg Exploring the west coast of Sweden ICEHOTEL 365 – the famous hotel becomes a year-round attraction The Coronavirus | The latest news and advice Staying at the ICEHOTEL in Sweden The Sunvil team’s 2022 travel highlights Booking a holiday IS legal Green means go. Amber means...? Read more inside Island hopping on Sweden’s west coast The ICEHOTEL 2016 Discover the Koster Islands, Sweden’s Secret Hideaway Tips for travelling post-lockdown Highlights of Stockholm The Coronavirus | Sweden 5 things to do on a summer holiday in northern Sweden Öland – a very Swedish holiday island Introducing the Art Suite designs for the 26th ICEHOTEL in Swedish Lapland World Book Day with the Sunvil Team Where to go on holiday in July