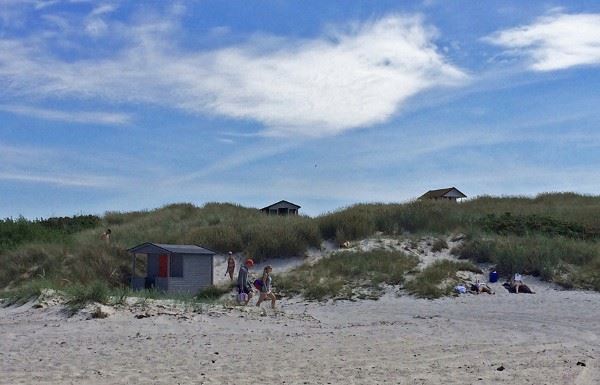 If you’ve seen the Scandi-noir TV crime series The Bridge you’ll be familiar with the remarkable feat of engineering that links Sweden and Denmark across the Öresund strait. Like me, you might have been chilled to the core by some of the gruelling scenes set in nearby waterside locations – and may even be under the impression this particular stretch of coastline is a bit grim. Not so, as I recently discovered. In fact, just south of here lies one of the most desirable destinations in Sweden, popular with families, weekenders and the telecommuting Stockholm elite, who pack up their lives and decamp to the coast for the entire summer. 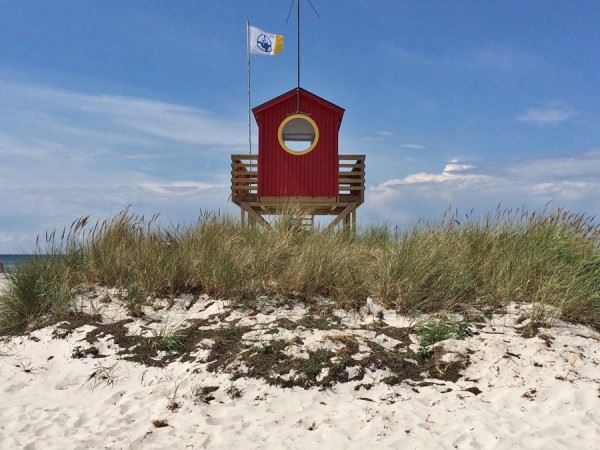 Forty minutes south of Malmö and with clear views to the bridge, the mermaid-shaped Falsterbo peninsula marks the far southwestern tip of Sweden and is home to a couple of Skåne’s prettiest beach towns. Often referred to as the Swedish Riviera, the twin medieval hotspots of Falsterbo town and its northern neighbour Skanör sit behind a six-mile arc of chalk white sand backing onto grassy dunes, intermittent Scotch pine woods and quiet residential streets lined with a harmonious mix of contemporary and traditional houses, all unfailingly stylish and well-tended.

Further south, the famous Falsterbo Golf Club occupies a blustery spot just north of the Måkläppen nature reserve; a narrow swirl of an islet now attached to the mainland thanks to continually shifting sands. Along with a colony of harbour seals, the reserve is also home to Sweden’s only population of grey seals – their one permanent habitat in the entire southern Baltic region. To protect both species during their respective pupping seasons, public access to Måkläppen is limited to late autumn and winter only, but fortunately the peninsula’s other nature reserves (there are 12 in total) offer plenty more reasons to get your binoculars out. This is arguably the best destination in Europe for viewing the autumn passage of migrating birds, and as such attracts thousands of birders from across the continent every year.
Harbour, Falsterbo 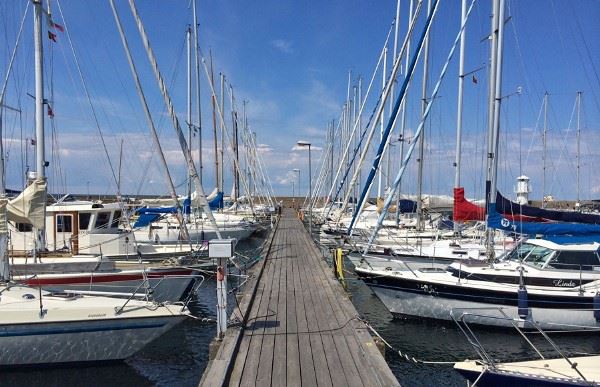 Around 150 species and up to three million birds are counted at Falsterbo each autumn. Leaving the far north and flying over land, the Baltic sea is the first major hurdle in their journey back to the tropics and the narrow promontory marks the end of the coastline they’ve been following for days, serving as a natural rest stop. Nabben is the most popular nature reserve for viewing the migration, and though you’ll be able to tick off scores of different species here, the superstars are the birds of prey. Late summer sees the arrival of those travelling furthest – ospreys, honey-buzzards, peregrine falcons and marsh harriers among others – followed predominantly by sparrowhawks in September then red kites and buzzards in October; sometimes up to several thousand per day.

But in the height of the holiday season Falsterbo is all about being by the sea, and back on the beach the vibe is one of laid back, low-key exuberance. Even at the relatively buzzy Skanör harbour it still feels like I’ve just dropped in on an understated local secret rather than a tourist resort, despite the rows of gleaming white yachts and groups of daytrippers queuing outside the fiskhuset. I walk down to the shoreline past the lifeguard hut and let the waves wash over my toes. The short Swedish summer is putting on its best show today, and a light breeze chivvies fat little clouds out of the way of the sun. Behind me sit a cluster of pastel coloured beach huts – not lined up in a nice neat row, but scattered at odd angles amongst the sand dunes like a flock of disoriented sheep. Young mums in Birkenstocks and expensive sunglasses thumb their phones while rubbing suncream into wriggly, already nut-brown children. It’s the archetypal Swedish scene; healthy, wealthy and effortlessly serene – about as far from a moody crime thriller as it’s possible to be. I might stay a bit longer than planned.

Dot com or dot con? Don’t be a victim of holiday fraud Winter holidays in Swedish Lapland Is Kiruna in Sweden really the world’s largest city? The Queen’s 90th Birthday: A Royal Visit The Coronavirus | Airports Notes from the field - Swedish Lapland in June
Highlights of Swedish Lapland Get closer to nature with a new direct flight from London to Lulea, Swedish Lapland 7 Facts about the Northern Lights EU referendum: What effect will the result have on your 2016 summer holiday? All for the love of travel | Looking forward An exciting glimpse of this year’s ICEHOTEL suites Stockholm: An affordable city break Swedish Lapland: Guest Blog by Mary Novakovich Utö – a Swedish island escape Discovering Gothenburg and a case of poor maths Stockholm for free – 6 museums in the Swedish capital with no admission charge Highlights of West Sweden All for the love of travel | Our 50th birthday Spring forward to one of our many favourite destinations in 2018 The ICEHOTEL celebrates its 31st anniversary November 2016 Sunvil Supper Club – Janssons frestelse All aboard! Sunvil’s top 8 railway journeys throughout Europe and Latin America.  The ICEHOTEL celebrates its 30th anniversary Where to go on holiday in June 8 Northern Lights Facts: An Infographic Why you should make the trip to Sweden in March Gotland – Sweden’s Holiday Island Hidden Gothenburg Autumn escapes The myths and legends of the Northern Lights Highlights of Gothenburg Exploring the west coast of Sweden ICEHOTEL 365 – the famous hotel becomes a year-round attraction The Coronavirus | The latest news and advice Staying at the ICEHOTEL in Sweden The Sunvil team’s 2022 travel highlights Booking a holiday IS legal Green means go. Amber means...? Read more inside Island hopping on Sweden’s west coast The ICEHOTEL 2016 Discover the Koster Islands, Sweden’s Secret Hideaway Tips for travelling post-lockdown Highlights of Stockholm 5 things to do on a summer holiday in northern Sweden Öland – a very Swedish holiday island Introducing the Art Suite designs for the 26th ICEHOTEL in Swedish Lapland World Book Day with the Sunvil Team Where to go on holiday in July Spreading Christmas cheer with Sunvil: Our top 7 destinations to visit during the festive period To Scandinavia in search of crime Where to go on holiday in December Where can Sunvil take you this spring? Travel to and within Europe from 01Jan21 The Coronavirus | Sweden