Staying at the ICEHOTEL in Sweden 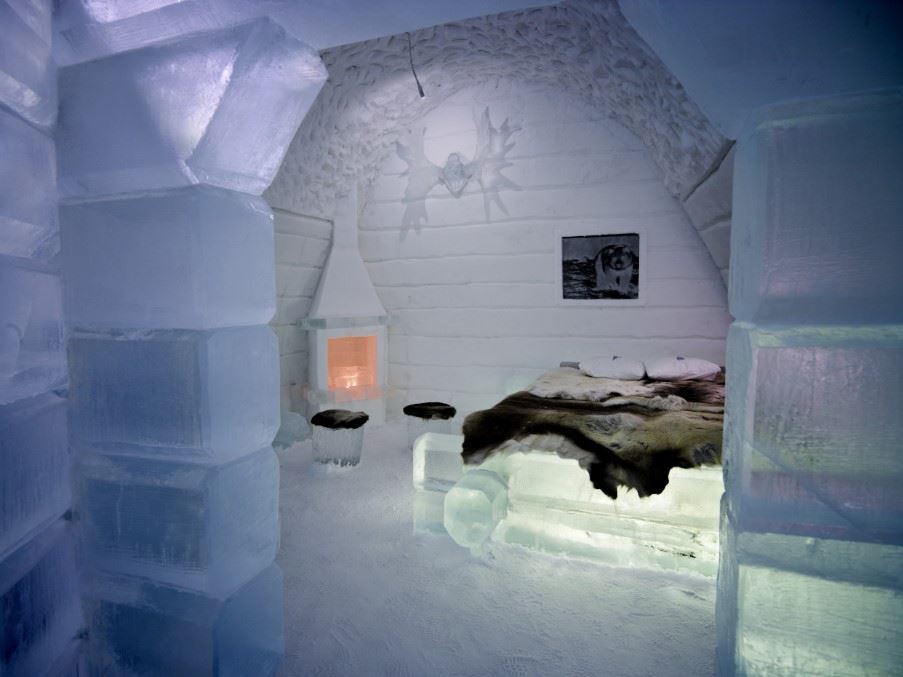 Since its humble beginnings in 1989, the ICEHOTEL in Jukkasjärvi has become one of the most unusual and iconic places in which to experience the Arctic winter. Each year it takes on a different form, and this year’s ICEHOTEL designs are particularly striking. And yet the hotel began almost by accident.

Japanese artists had come to the Jukkasjärvi region, around 200 km north of the Arctic Circle, to create an ice exhibition – Japan is, after all, famous for its fantastic snow and ice festivals. When a French artist held a similar exhibition in the spring of 1990, the event attracted visitors who had nowhere to stay in the village. They ended up sleeping in an igloo which was part of the exhibition, and the idea of the ICEHOTEL was born.

The hotel’s building materials are taken from the nearby Torne River: in all there are around 1,000 tonnes of ice and 30,000 cubic metres of snow/ice mixture (‘snice’ as they call it locally). Each ice block used in the construction of the hotel weighs almost 2 tonnes, and it typically takes around 8 weeks for the hotel to be built.

With ice-sculpted chandeliers and contemporary ice art in the entrance hall and lobby, the hotel creates a feeling of magic that’s unmistakable from the moment you arrive. Four-course dinners are served in a warm restaurant, but on plates of ice. In the bar the drinks are served in glasses made of ice; presumably asking for a drink on the rocks won’t present too much trouble to the barman.

A night in the cool rooms or the elaborate Art Suites is a night like no other. The temperature in the rooms is -5C – there’s no heating (obviously), and no plumbing, so night-time trips to the bathroom will involve a brisk walk to the shared facilities in the warm building nearby. With no doors, the entrance to rooms is a heavy curtain which is drawn in the morning by staff who wake the guests with a hot drink in bed. Warmth comes in the form of cosy Arctic sleeping bags.

The ICEHOTEL offers both warm and cold accommodation, and many guests opt for a package where they spend one or two nights sleeping in the ice rooms, before moving to the more conventional guest rooms (which have heating and bathrooms).

While the hotel itself may be the main attraction for its guests, there’s plenty to do while staying here. Activities on offer include ice sculpting classes, wildlife tours, husky sled rides and cross-country skiing. And to top it all, the region is recognised as one of the world’s best places from which to see the Northern Lights, or aurora borealis. You might be lucky and see the lights put on a show right outside the hotel; Northern Lights tours are also offered on horseback and by snowmobile.

See the Sunvil Discovery site for more about Winter Activities from the ICEHOTEL.

Travel to and within Europe from 01Jan21 Dot com or dot con? Don’t be a victim of holiday fraud Winter holidays in Swedish Lapland Falsterbo: the Swedish Riviera Is Kiruna in Sweden really the world’s largest city? The Queen’s 90th Birthday: A Royal Visit
The Coronavirus | Airports Notes from the field - Swedish Lapland in June Highlights of Swedish Lapland Get closer to nature with a new direct flight from London to Lulea, Swedish Lapland EU referendum: What effect will the result have on your 2016 summer holiday? All for the love of travel | Looking forward Stockholm: An affordable city break Swedish Lapland: Guest Blog by Mary Novakovich Utö – a Swedish island escape Discovering Gothenburg and a case of poor maths Stockholm for free – 6 museums in the Swedish capital with no admission charge All for the love of travel | Our 50th birthday Spring forward to one of our many favourite destinations in 2018 The ICEHOTEL celebrates its 31st anniversary November 2016 Sunvil Supper Club – Janssons frestelse All aboard! Sunvil’s top 8 railway journeys throughout Europe and Latin America.  The ICEHOTEL celebrates its 30th anniversary Where to go on holiday in June 8 Northern Lights Facts: An Infographic Why you should make the trip to Sweden in March Hidden Gothenburg The myths and legends of the Northern Lights Highlights of Gothenburg Exploring the west coast of Sweden The Coronavirus | The latest news and advice The Sunvil team’s 2022 travel highlights Booking a holiday IS legal Island hopping on Sweden’s west coast The ICEHOTEL 2016 Tips for travelling post-lockdown Highlights of Stockholm The Coronavirus | Sweden Introducing the Art Suite designs for the 26th ICEHOTEL in Swedish Lapland World Book Day with the Sunvil Team Where to go on holiday in July Exploring the Aeolian Islands The attractions of Chrani and surrounding Areas Cape Horn: A most memorable travel experience No-deal warning: don’t go on holiday after March 29 2019 | Sunvil's response Returning to our TV screens in April, 2017 – Corfu and The Durrells Trondheim, the original capital of Norway 10 reasons to go to Norway on your next holiday Highlights of Northern Portugal Notes from the field - Andalucia Sagres – the end of the world A walk in Thessaloniki’s Upper Town Walking in Kalami, Corfu Exploring Puglia – along Italy’s heel On the history trail in Cyprus 7 things not to miss in Argentina A slice of island life on Lipari Greece: The truth behind the headlines – Part Three 5 people you may not have known were Greek Barra da Tijuca – a very modern side of Rio Notes from the field – Corfu and Paxos Italy... what not to miss Tolon revisted Do come to Samos In 2016! Notes from the field – Brazil, Argentina & Uruguay May 2016 Sunvil Supper Club – Skopelos Goat and Prunes The unique wonders of the Galapagos Islands Notes from the field - Costa Rica Up and coming Greek islands Golf Holidays in Cyprus Notes from the field – The Sacred Valley, Peru Questions to consider when planning a fly-drive holiday to Greece or Cyprus On the Trail of Aristotle Alentejo Wine routes Ammouliani – Halkidiki’s Secret Island Five unreal places in South America you have to visit Greece and the Mamma Mia Trail Stargazing in the Atacama Desert in Chile Monemvasia - A Plan For All Seasons Paphos – European Capital of Culture 2017 Highlights of Northern Norway Spectacular Lofoten Islands and Vesteralen Spotlight on Wildlife: Jaguar Discover the alternative activities on Ikaria Celebrating Carnival in South America The 29th incarnation of the ICEHOTEL's Art Suites Notes from the field – Puglia Notes from the field – Northern Portugal Paphos - European Capital of Culture 2017 Esteros del Iberá – Argentina’s secret natural wonder Notes from the field – Svalbard, Norway Discover UNESCO World Heritage sites on Cyprus Birdwatching holidays in Guatemala Island style: Luxury and boutique hotels in the Azores Holidays in the Peloponnese – a short introduction Oaxaca, Mexico’s Cultural Heart The Greek island of Samos and a journey to the land of Pythagoras The little-known sites of Ancient Greece Notes from the field – The Northern Fjords Great hikes and idle strolls on Crete Southern Albania as part of a twin-centre holiday The Algarve – Our Top 10 Cultural attractions A Brief Guide to Thassos A day in Enna Celebrating Greek Easter 5 Ideas for Spa Breaks in Portugal Driving around Naxos The Azores May time in Greece Spotlight on Wildlife: Hummingbirds Who can you trust? Our 10 Best things to do in Florence, Italy 10 things you didn’t know about the Azores Leaves from a Greek Village 10 tips for travelling in 2022: learn from the experiences of the Sunvil team Notes from the field – the Algarve On the trail of Aristotle on his 2400th birthday Small-ship Amazon cruises The legends and charms of Lemnos Things to do in Norway while waiting for the Northern Lights Notes from the field – Svalbard, Norway The Alentejo - hidden Portugal 5 things to do when you miss your ferry on Skopelos! 5 highlights of a holiday in Chile Alternative activities in Ikaria San Ignacio Mini The five seasons of Svalbard A day in the Marine Park of Alonissos Greece Revisited Dion Alentejo - Guest Blog by Mary Novakovich Wild encounters in Latin America Limenas – the laid-back main town of Thassos Dodecanese – an introduction to 5 of the lesser-known islands 7 Facts about the Northern Lights An exciting glimpse of this year’s ICEHOTEL suites Highlights of West Sweden Gotland – Sweden’s Holiday Island Autumn escapes ICEHOTEL 365 – the famous hotel becomes a year-round attraction Green means go. Amber means...? Read more inside Discover the Koster Islands, Sweden’s Secret Hideaway 5 things to do on a summer holiday in northern Sweden Öland – a very Swedish holiday island