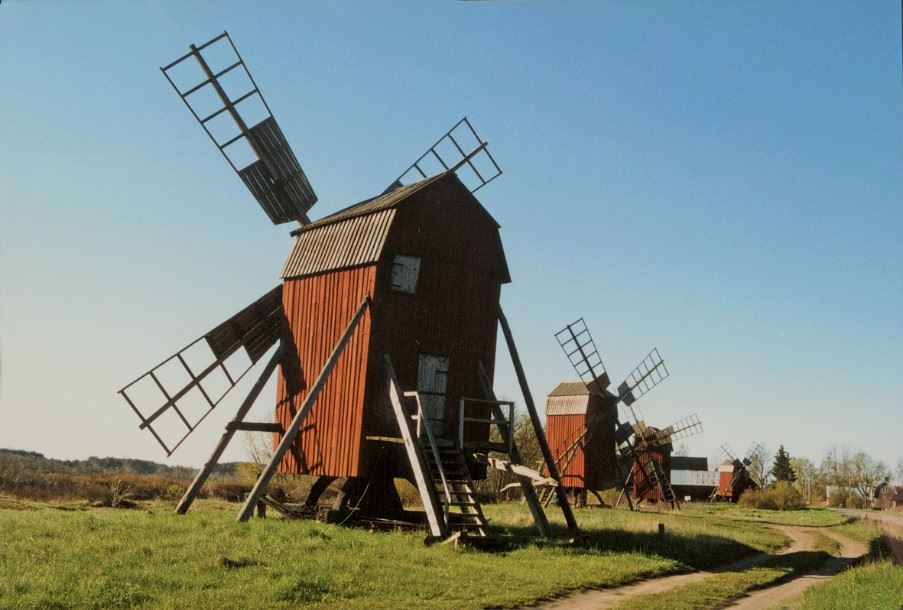 It’s almost 100 miles long and in parts less than 5 miles wide. Öland has for many years been a popular holiday destination for Swedes, and its population of 25,000 swells substantially in the summer months. When the Öland Bridge opened in 1972 and finally connected the island with the Swedish mainland, travelling to Öland became effortless – remarkably for a 6 km bridge which was the longest bridge in Europe for over 25 years, it is toll-free. Locals will tell you proudly that the Öland Bridge is Sweden’s longest, beating the Öresund bridge because a large part of that crossing lies in Danish territory. But despite its modern connection to the mainland, Öland maintains a distinct sense of identity, and visitors to the island can enjoy both its natural and historic attractions.

Borgholm is the largest (only) city on Öland, but at the same time is one of Sweden’s smallest, with a population of barely 3,000. With its many shops, restaurants and cafes, Borgholm is the main tourist spot on the island. The main historical attraction in the city is the ruin of Borgholm Castle, a 12th-century fortress built to protect the country from its enemies to the east. The castle and its museum are open to visitors, and concerts and performances are regularly held within the ruins.

Öland in general, and Borgholm in particular, are renowned for their farm-to-table food scene. You’ll find many restaurants proudly celebrating their use of Öland produce, and while good food is taken very seriously here, dining is a laid-back affair with outdoor tables set out to make the most of the long summer evenings.

Öland was an important strategic site during the many centuries of Baltic instability and war, and as a result you’ll find several fortresses. But many more of the historical buildings are a result of the island’s isolation and its reliance on fishing and agriculture. There are windmills scattered all around the island; around 2000 were built during the 19th century, and while most have gradually fallen into ruin around 350 still stand and are maintained by local enthusiasts. Also from the 19th century is the Långe Erik lighthouse on the northern tip of the island. The 32-metre-high tower is no longer in use, but is open to visitors who can enjoy fabulous views out to sea.

For a taste of Öland’s wild nature, the UNESCO-listed Stora Alvaret is a must-see. This desolate area to the south of the island is a large, limestone plain which is home to pre-historic settlements. There are walking trails throughout the plain, and the area is popular with birdwatchers, with cranes and plovers particularly common in the spring.

To really immerse yourself in island life, take a trip to Öland for the Skördefest, an annual harvest festival which takes place in late September/early October. The island appears to be overrun with pumpkins, and the local celebrations attract around 200,000 visitors each year. As well as celebrating Öland’s fertile soil, the events around the island also highlight its strong cultural heritage.

Find out more about Sunvil Discovery holidays to Öland.

Travel to and within Europe from 01Jan21 Dot com or dot con? Don’t be a victim of holiday fraud Winter holidays in Swedish Lapland Falsterbo: the Swedish Riviera Is Kiruna in Sweden really the world’s largest city? The Queen’s 90th Birthday: A Royal Visit
The Coronavirus | Airports Notes from the field - Swedish Lapland in June Highlights of Swedish Lapland Get closer to nature with a new direct flight from London to Lulea, Swedish Lapland EU referendum: What effect will the result have on your 2016 summer holiday? All for the love of travel | Looking forward Stockholm: An affordable city break Swedish Lapland: Guest Blog by Mary Novakovich Utö – a Swedish island escape Discovering Gothenburg and a case of poor maths Stockholm for free – 6 museums in the Swedish capital with no admission charge All for the love of travel | Our 50th birthday Spring forward to one of our many favourite destinations in 2018 The ICEHOTEL celebrates its 31st anniversary November 2016 Sunvil Supper Club – Janssons frestelse All aboard! Sunvil’s top 8 railway journeys throughout Europe and Latin America.  The ICEHOTEL celebrates its 30th anniversary Where to go on holiday in June 8 Northern Lights Facts: An Infographic Why you should make the trip to Sweden in March Hidden Gothenburg The myths and legends of the Northern Lights Highlights of Gothenburg Exploring the west coast of Sweden The Coronavirus | The latest news and advice The Sunvil team’s 2022 travel highlights Booking a holiday IS legal Island hopping on Sweden’s west coast The ICEHOTEL 2016 Tips for travelling post-lockdown Highlights of Stockholm The Coronavirus | Sweden Introducing the Art Suite designs for the 26th ICEHOTEL in Swedish Lapland World Book Day with the Sunvil Team Where to go on holiday in July Exploring the Aeolian Islands The attractions of Chrani and surrounding Areas Cape Horn: A most memorable travel experience Returning to our TV screens in April, 2017 – Corfu and The Durrells Trondheim, the original capital of Norway 10 reasons to go to Norway on your next holiday Highlights of Northern Portugal Notes from the field - Andalucia Sagres – the end of the world A walk in Thessaloniki’s Upper Town Walking in Kalami, Corfu Exploring Puglia – along Italy’s heel On the history trail in Cyprus 7 things not to miss in Argentina A slice of island life on Lipari Greece: The truth behind the headlines – Part Three 5 people you may not have known were Greek Barra da Tijuca – a very modern side of Rio Notes from the field – Corfu and Paxos Italy... what not to miss Tolon revisted Do come to Samos In 2016! Notes from the field – Brazil, Argentina & Uruguay May 2016 Sunvil Supper Club – Skopelos Goat and Prunes The unique wonders of the Galapagos Islands Notes from the field - Costa Rica Up and coming Greek islands Golf Holidays in Cyprus Notes from the field – The Sacred Valley, Peru Questions to consider when planning a fly-drive holiday to Greece or Cyprus On the Trail of Aristotle Alentejo Wine routes Ammouliani – Halkidiki’s Secret Island Five unreal places in South America you have to visit Greece and the Mamma Mia Trail Stargazing in the Atacama Desert in Chile Monemvasia - A Plan For All Seasons Paphos – European Capital of Culture 2017 Highlights of Northern Norway Spectacular Lofoten Islands and Vesteralen Spotlight on Wildlife: Jaguar Discover the alternative activities on Ikaria Celebrating Carnival in South America The 29th incarnation of the ICEHOTEL's Art Suites Notes from the field – Puglia Notes from the field – Northern Portugal Paphos - European Capital of Culture 2017 Esteros del Iberá – Argentina’s secret natural wonder Notes from the field – Svalbard, Norway Discover UNESCO World Heritage sites on Cyprus Birdwatching holidays in Guatemala Island style: Luxury and boutique hotels in the Azores Holidays in the Peloponnese – a short introduction Oaxaca, Mexico’s Cultural Heart The Greek island of Samos and a journey to the land of Pythagoras The little-known sites of Ancient Greece Notes from the field – The Northern Fjords Great hikes and idle strolls on Crete No-deal warning: don’t go on holiday after March 29 2019 | Sunvil's response Southern Albania as part of a twin-centre holiday The Algarve – Our Top 10 Cultural attractions A Brief Guide to Thassos A day in Enna Celebrating Greek Easter 5 Ideas for Spa Breaks in Portugal Driving around Naxos The Azores May time in Greece Spotlight on Wildlife: Hummingbirds Who can you trust? Our 10 Best things to do in Florence, Italy 10 things you didn’t know about the Azores Leaves from a Greek Village 10 tips for travelling in 2022: learn from the experiences of the Sunvil team Notes from the field – the Algarve On the trail of Aristotle on his 2400th birthday Small-ship Amazon cruises The legends and charms of Lemnos Things to do in Norway while waiting for the Northern Lights Notes from the field – Svalbard, Norway The Alentejo - hidden Portugal 5 things to do when you miss your ferry on Skopelos! 5 highlights of a holiday in Chile Alternative activities in Ikaria San Ignacio Mini The five seasons of Svalbard A day in the Marine Park of Alonissos Greece Revisited Dion Alentejo - Guest Blog by Mary Novakovich Wild encounters in Latin America Limenas – the laid-back main town of Thassos Dodecanese – an introduction to 5 of the lesser-known islands 7 Facts about the Northern Lights An exciting glimpse of this year’s ICEHOTEL suites Highlights of West Sweden Gotland – Sweden’s Holiday Island Autumn escapes ICEHOTEL 365 – the famous hotel becomes a year-round attraction Staying at the ICEHOTEL in Sweden Green means go. Amber means...? Read more inside Discover the Koster Islands, Sweden’s Secret Hideaway 5 things to do on a summer holiday in northern Sweden