Chile is long and narrow. It is, in fact, 2,670 miles long – about the same distance as London to Tehran in Iran – but only 217 miles wide at its maximum. It almost reaches into Antarctica in the south and, in the north, is arid desert. Parts of the Atacama Desert, amidst its total area of 49,000 square miles, represent the driest place on earth; the centre of the desert is reputed to have seen no rain for 25 million years (give or take 10 million years either way). 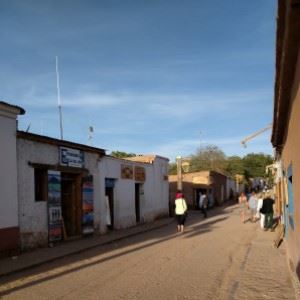 After a two hour 10 minute flight north from Santiago, in the central valley, to the mining town of Calama, it is a further 75 minute drive through the desert to San Pedro de Atacama, surrounded by volcanic peaks thousands of metres high, four of which are active. Millions of years ago the area was a swamp; the water remains, but is now about 1.5 km underground. The oasis was originally much larger but, in the 16th century, many of the slow-growing trees were cut down by the Spanish to build houses.

The final part of the drive to San Pedro passes Moon Valley to the right and Death Valley to the left. The landscapes are contorted and surreal, salt pans abound and, below the surface, is just about every kind of mineral imaginable; this is where the wealth of Chile lies. It is not in any way a monotonous desert landscape, but is one of lunar terrain, jagged peaks, giant dunes, snow-capped peaks, lagoons and oases.

The entry into the small oasis of San Pedro – with its adobe houses, mud-brick walls and unmade dirt roads, regularly watered to keep them in shape and cut down the dust, reminds one of a Yemeni village. Behind a high adobe wall on the outskirts of the village lies the Tierra Atacama hotel. In common with its sister hotel in Patagonia, the property blends into the landscape. Fig and pomegranate trees and a myriad of plants and vegetables cool the gardens, dragonflies flit across pools of water and the views from the rooms are towards the 5,916m high, snow-capped, majestic and perfectly-formed volcanic peak of Volcan Licancabur. Cool by day and warm by night – essential in the desert – the hotel is the perfect oasis-within-the-oasis of San Pedro. 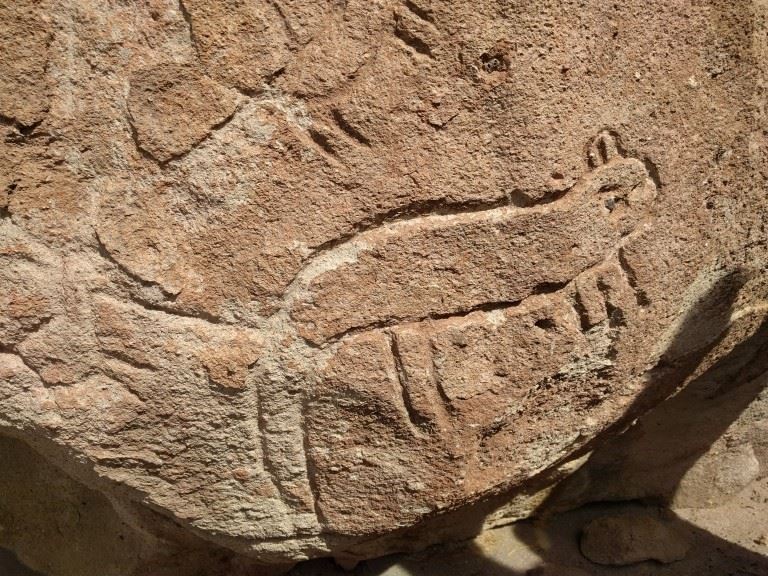 But there is far too much to see and do to spend too much time relaxing in the cool surroundings of the Tierra Atacama. There is a wonderful excursion to view 6,000 year old petroglyphs, hand-hewn by indigenous tribes and the conquering Incas, followed by a visit to Rainbow Valley with unique rock formations dating back millions of years – to when the giant plates of the earth’s crust came together. All around are llamas, guanacos and vicunas; herds of wild donkeys, escaped from the conquistadors in the 16th century, roam the parched plains.

Climbing even higher, and over an hour’s drive from San Pedro, is the El Tatio Geyser Field. At 4,462 metres above sea level, these fields, amongst the highest in the world, have 80 active geysers – making the El Tatio field the third largest on earth. And, on the way back, why not enjoy a relaxing soak in the thermal baths of Puritama? That’s exactly what we did for a pleasant hour.

At 3km from San Pedro is the pre-Colombian site of the ancient fortress of Pukara de Quitor. Overrun by Spanish conquerors in the 16th century, the fort commands a dramatic mountain peak giving 360 degree vision for tens of miles. It takes an hour to walk to the top and you have to be fit, but the views are worth every step. 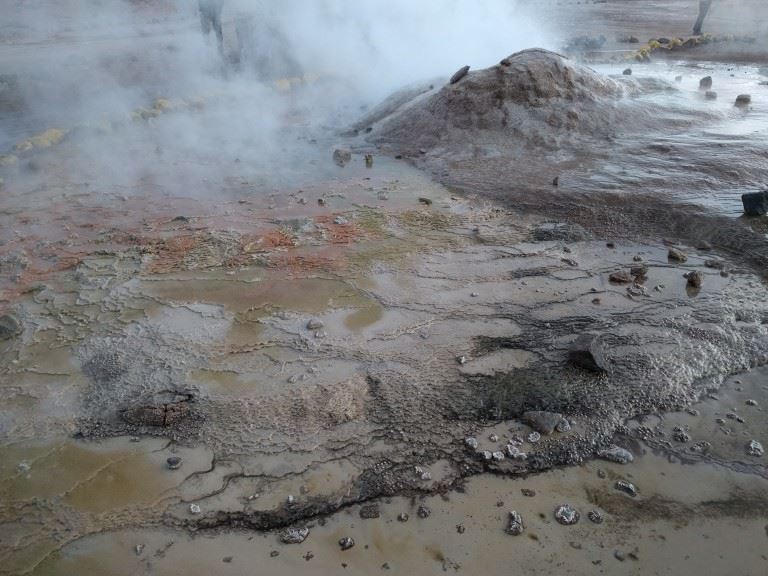 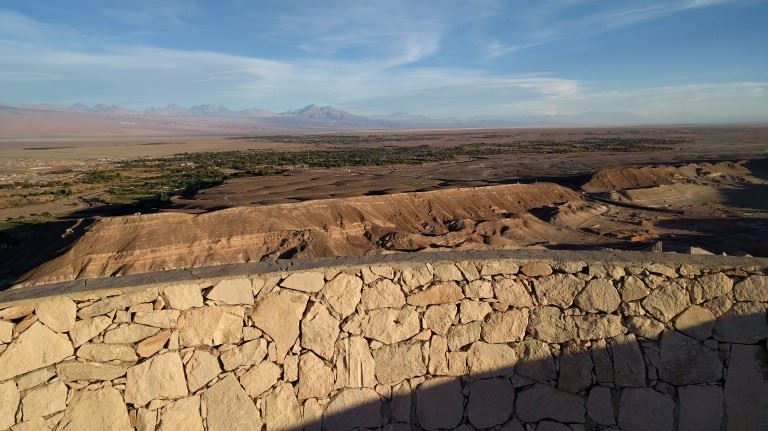 The Atacama will take your breath away in more ways than one – San Pedro is located at 2,407 m – almost 8,000 feet – above the sea! It’s recommended to acclimatise over the course of a few days, and to drink a lot of liquids to help the body adjust. Having seen Patagonia, in the south, first of all on our trip to Chile, then the beautiful city of Santiago, the Atacama Desert was a fitting grand finale. As one of our party said: “I learnt about the Atacama Desert at school. Little did I imagine that one day I’d be standing in the midst of its rugged terrain; quite amazing!”.

Travel to and within Europe from 01Jan21 Booking a holiday IS legal Peace of Mind Promise for 2022 Happy New Year from the Sunvil family Subbetica - the home of award winning olive oil All for the love of travel | 8 reasons to visit Cyprus this autumn
All for the love of travel | A warm welcome at the Axiothea awaits All for the love of travel | Our 50th birthday All for the love of travel | Looking forward All for the love of travel | My most memorable trip - Noel Josephides All for the love of travel | Noel Josephides Travel to a lesser-known destination with Sunvil and get more 'bang for your buck' Gigantes and grilled lamb - a real taste of the southern Peloponnese Kalamaki Villas: The perfect choice for a comfortable and relaxing holiday in the real Greece No-deal warning: don’t go on holiday after March 29 2019 | Sunvil's response Introduction to Castilla y Leon Spring and Easter in the beautiful Peloponnese Project Kalamaki Villas in Chrani Noel's trip to Uruguay and Argentina Why now is a good time to go to Greece The truth behind the headlines: Migrants in Greece Reviving the Olympic Spirit – the Nemean Games 2016 The Michelin Star of the North The Alternative, Real Algarve The latest financial shenanigans in Greece The Chilean Wilderness at its very best Celebrating 25 years of operating to the Azores Slaying Greek Myths Santiago de Chile Dot com or dot con? Don’t be a victim of holiday fraud Tolon revisted The little-known sites of Ancient Greece Stockholm: An affordable city break Who can you trust? The downside of flying on no-frills flights… The Revival of the Nemean Games EU referendum: What effect will the result have on your 2016 summer holiday? Paphos – European Capital of Culture 2017

Cape Horn: A most memorable travel experience The Queen’s 90th Birthday: A Royal Visit July 2016 Sunvil Supper Club – Caldillo de Congrio (Conger Chowder) The Coronavirus | Airports Five unreal places in South America you have to visit Stargazing in the Atacama Desert in Chile
The Chilean Wilderness at its very best Where to go on holiday in October Notes from the field - Argentina, Brazil and Chile All for the love of travel | Ask the experts #2 The Coronavirus | The latest news and advice Santiago de Chile Booking a holiday IS legal Where to go on holiday in January Notes from the field: Chile and Argentina A selection of the best beaches in Latin America Their race has finished, let your Latin America journey begin UNESCO World Heritage Sites in Latin America 5 highlights of a holiday in Chile Our top 5 destinations for wine lovers