Stargazing in the Atacama Desert in Chile

The Atacama Desert is home to some of the clearest and darkest skies in the world. With over 80% of days offering cloudless skies and nothing to produce light pollution for many miles around, it’s no surprise that some of the world’s largest space laboratories have invested millions in building their most powerful telescopes here. And while the scientific community has long made the most of the unique natural characteristics of this remote region, in recent years it has also began to develop as an astrotourism destination, catering to anyone from enthusiastic amateur astronomers to those with a simple curiosity about the sky at night. It’s perhaps apt that an area with celestial links (the Valle de la Luna, or Moon Valley is named for its otherwordly appearance, and even has a ‘dark side’), is one of the world’s top places from which to explore the heavens.

Visitors to the Atacama Desert can decide just how serious they want to be in their exploration of the night sky. On one level, small group tours are taken to the Elqui Valley, where visitors can learn about the basics of astronomy over blankets, warm soup and hot bread (desert nights do get quite chilly), before getting their chance to enjoy the night sky through scientific telescopes. Other private tours have a distinct educational element, with slideshows and tips on identification of the different stars and planets.

For those wanting to experience the biggest, most powerful telescopes, a new visitor facility has opened in 2016 at ALMA, the Atacama Large Millimeter/submillimeter Array. The ALMA observatory has developed the capability of seeing stars billions of light years away; you’re effectively looking at objects as they were at a time not that long after the birth of the universe. The main telescopes (or antennae to be precise) are at 5,000 metres above sea level, but thankfully visitors don’t need to reach those oxygen-sapping altitudes to enjoy the views. Instead the visitor facility is at a more comfortable 2,900 metres. As well as a purpose-built visitor centre, guests are able to see the control room and laboratories in action. While most of us consider stargazing a nighttime activity thanks to our familiarity with optical telescopes, here the mechanics of radio telescopes mean that darkness is not an issue; as a result tours usually take place in the bright morning sun. ALMA arrange transport for guests between the nearby town of San Pedro de Atacama and the visitor centre, and guests are not allowed to make their own way up to the centre.

To make life easier for holidays to faraway Chile, from January 2017 British Airways will operate a non-stop flight between London Heathrow and Santiago, the country’s colourful capital. At 14 hours and 40 minutes, this will be BA’s longest route, but despite what is a long stretch on one place, it will significantly cut down the overall travel time involved in getting to Chile. 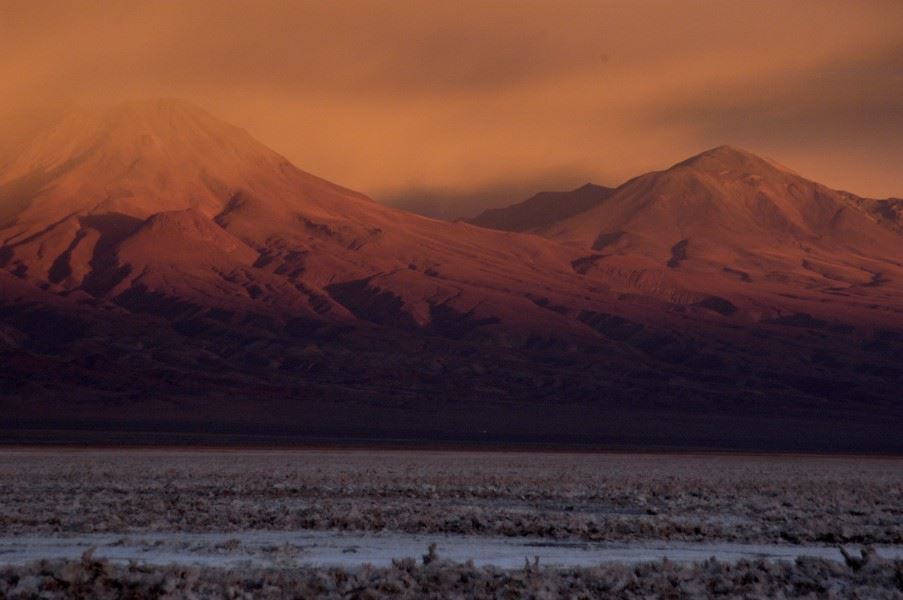 The Queen’s 90th Birthday: A Royal Visit July 2016 Sunvil Supper Club – Caldillo de Congrio (Conger Chowder) The Coronavirus | Airports The Chilean Wilderness at its very best Where to go on holiday in October Notes from the field - Argentina, Brazil and Chile
All for the love of travel | Ask the experts #2 The Coronavirus | The latest news and advice Santiago de Chile Booking a holiday IS legal Where to go on holiday in January Notes from the field: Chile and Argentina A selection of the best beaches in Latin America The Atacama Desert Their race has finished, let your Latin America journey begin UNESCO World Heritage Sites in Latin America Our top 5 destinations for wine lovers Exploring the Aeolian Islands The attractions of Chrani and surrounding Areas Returning to our TV screens in April, 2017 – Corfu and The Durrells Trondheim, the original capital of Norway 10 reasons to go to Norway on your next holiday Highlights of Northern Portugal Notes from the field - Andalucia Sagres – the end of the world A walk in Thessaloniki’s Upper Town Walking in Kalami, Corfu Exploring Puglia – along Italy’s heel On the history trail in Cyprus 7 things not to miss in Argentina A slice of island life on Lipari Greece: The truth behind the headlines – Part Three 5 people you may not have known were Greek Barra da Tijuca – a very modern side of Rio Notes from the field – Corfu and Paxos Italy... what not to miss Tolon revisted Do come to Samos In 2016! Notes from the field – Brazil, Argentina & Uruguay May 2016 Sunvil Supper Club – Skopelos Goat and Prunes The unique wonders of the Galapagos Islands Notes from the field - Costa Rica 7 Facts about the Northern Lights Up and coming Greek islands An exciting glimpse of this year’s ICEHOTEL suites Golf Holidays in Cyprus Notes from the field – The Sacred Valley, Peru Questions to consider when planning a fly-drive holiday to Greece or Cyprus On the Trail of Aristotle Alentejo Wine routes Ammouliani – Halkidiki’s Secret Island Greece and the Mamma Mia Trail Monemvasia - A Plan For All Seasons Paphos – European Capital of Culture 2017 Highlights of Northern Norway Highlights of West Sweden Spectacular Lofoten Islands and Vesteralen Spotlight on Wildlife: Jaguar Discover the alternative activities on Ikaria Celebrating Carnival in South America The 29th incarnation of the ICEHOTEL's Art Suites Notes from the field – Puglia Gotland – Sweden’s Holiday Island Notes from the field – Northern Portugal Autumn escapes Paphos - European Capital of Culture 2017 Esteros del Iberá – Argentina’s secret natural wonder Notes from the field – Svalbard, Norway Discover UNESCO World Heritage sites on Cyprus ICEHOTEL 365 – the famous hotel becomes a year-round attraction Birdwatching holidays in Guatemala Island style: Luxury and boutique hotels in the Azores Holidays in the Peloponnese – a short introduction Oaxaca, Mexico’s Cultural Heart The Greek island of Samos and a journey to the land of Pythagoras The little-known sites of Ancient Greece Notes from the field – The Northern Fjords Staying at the ICEHOTEL in Sweden Great hikes and idle strolls on Crete No-deal warning: don’t go on holiday after March 29 2019 | Sunvil's response Green means go. Amber means...? Read more inside Southern Albania as part of a twin-centre holiday The Algarve – Our Top 10 Cultural attractions Discover the Koster Islands, Sweden’s Secret Hideaway A Brief Guide to Thassos A day in Enna Celebrating Greek Easter 5 Ideas for Spa Breaks in Portugal Driving around Naxos The Azores May time in Greece Spotlight on Wildlife: Hummingbirds Who can you trust? Our 10 Best things to do in Florence, Italy 10 things you didn’t know about the Azores Leaves from a Greek Village 10 tips for travelling in 2022: learn from the experiences of the Sunvil team Notes from the field – the Algarve On the trail of Aristotle on his 2400th birthday Small-ship Amazon cruises The legends and charms of Lemnos Things to do in Norway while waiting for the Northern Lights Notes from the field – Svalbard, Norway 5 things to do on a summer holiday in northern Sweden The Alentejo - hidden Portugal Öland – a very Swedish holiday island 5 things to do when you miss your ferry on Skopelos! Alternative activities in Ikaria San Ignacio Mini The five seasons of Svalbard A day in the Marine Park of Alonissos Greece Revisited Dion Alentejo - Guest Blog by Mary Novakovich Wild encounters in Latin America Limenas – the laid-back main town of Thassos Dodecanese – an introduction to 5 of the lesser-known islands Cape Horn: A most memorable travel experience Five unreal places in South America you have to visit 5 highlights of a holiday in Chile