The little-known sites of Ancient Greece

The modern day descendants of the ancient Greeks have much to be thankful to their distant ancestors for. The enormous heritage they left in terms of temples, towns and cities – and the fact that Hellenic Greece is recognised as being the birthplace of western thought and civilisation – today attracts thousands of visitors to Greek shores, and the money they bring is a vital lifeline in these days of severe austerity for modern Greeks.

Historic sites such as the Acropolis and Parthenon in Athens, and Meteora, Olympia, Delphi in the Peloponnese are world-renowned. There are however, hundreds of smaller, less well-known – yet equally impressive – sites across the country.

We have asked our local representatives to nominate their favourite ancient site in or around their resorts.

Amanda, our representative on the island of Thassos, recommends the ancient site of Philippi (a site which can be visited on an excursion or a self-guided day trip from the island). Founded by King Phillip 2nd of Macedonia, the father of Alexander the Great, in 356 BC, the site houses the remains of the earliest Christian churches in Europe, the Acropolis of Philippi, historic mosaics, Roman baths and part of the original Via Egnatia road that runs across the entire country – you can see chariot tracks and games such as hopscotch that the Romans carved into the stones. 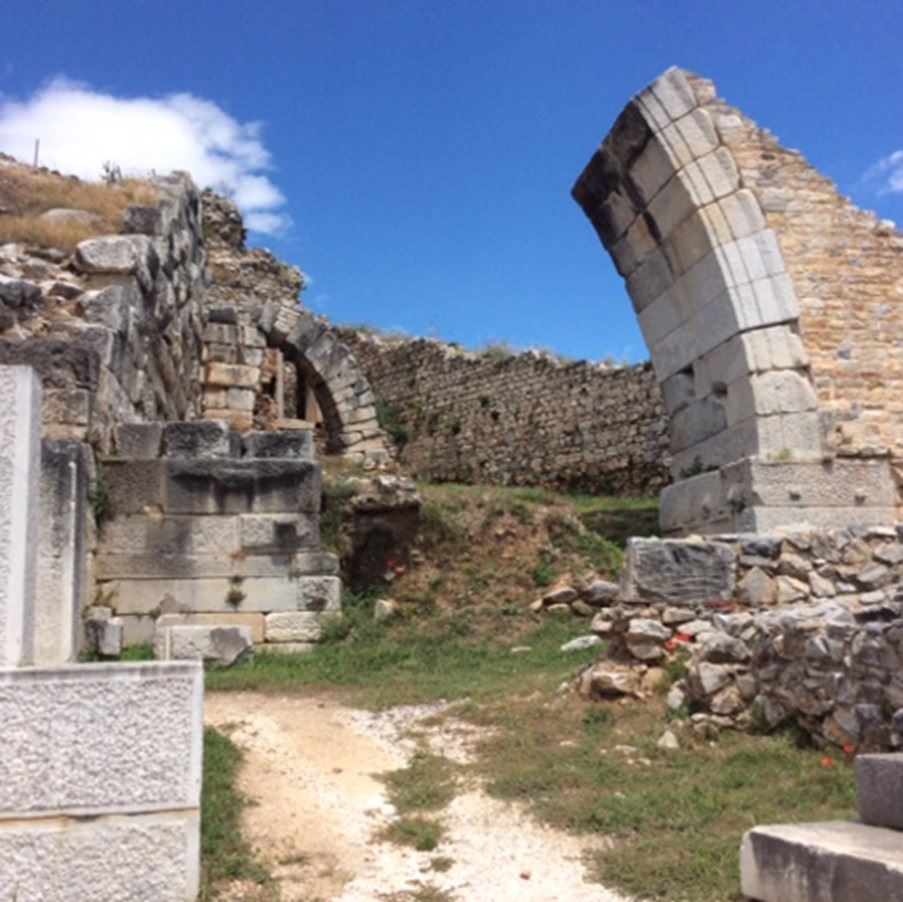 Dimitris, in Olymbiada, naturally enthuses about Ancient Stagira, the most important historic site in Halkidiki. Stagira was founded in 655 BC by Ionian settlers from the island of Andros. In its prime it was larger than Athens (with 7,000 inhabitants) and it is principally known for being the birthplace of Aristotle, who was a student of Plato and the teacher of Alexander the Great. The location of Stagira is magnificent, as the ancient city straddled two sides of a promontory, with harbours either side so that boats could land safely no matter which wind prevailed; the views across the sea are wonderful. Just a short walk (uphill!) from Oymbiada, Stagira is well worth visiting and has been partly excavated using EU funds. Aristotle is buried there. 2016 sees the 2,400th anniversary of his birth, and local Aristotle walks and other celebrations are planned. The natural mussel beds, from which bounty was enjoyed in the time of Aristotle, are still farmed today for use in the local restaurants. 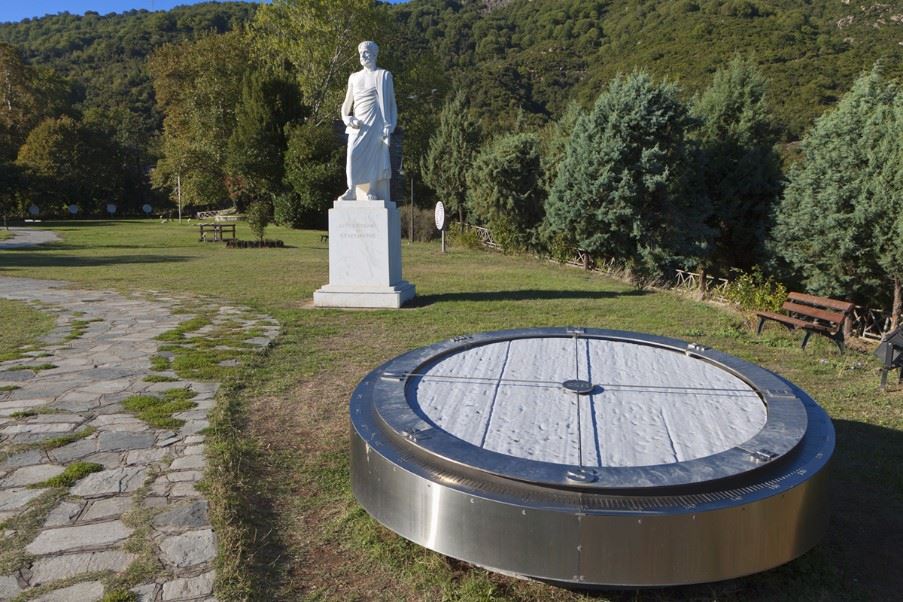 Pauline in Kalamata reminded us of the little-visited but extensive site of Ancient Messini. For many years the Messinians were under the thumb of Sparta until, in 371 BC, Messinia was liberated by King Epaminondas of Thebes. In 369 BC, he helped found the city of Ancient Messini. The site is still being excavated and it is well worth visiting on a regular basis as there is something new to be seen on every visit.

There’s also Nestor’s Palace nearby, where recently an entire (intact) tomb of a wealthy soldier was found, much to the astonishment of archaeologists working there as it’s extremely unusual to find tombs which have not been looted. 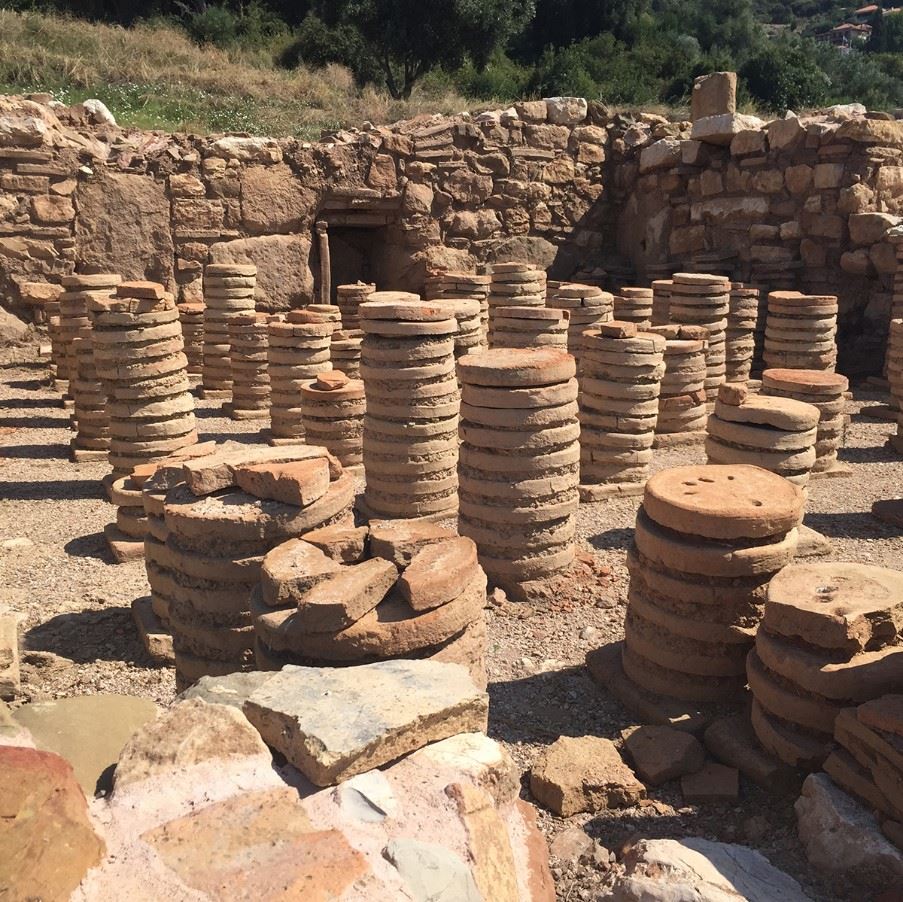 ANCIENT IREON AND THE TEMPLE OF HERA – island of Samos
Between 570 and 560 BC, three monumental temples were built in the Ionic style on the eastern Aegean island of Samos plus coastal Didyma and Ephesus. These were enormous edifices.

In Samos, the architect was Rhoikos and the Temple to Hera, 52 metres wide by 106 metres long, was unprecedented in Greek architecture of that period. There were 155 pillars measuring 20 metres high.

Sadly only one pillar remains – and at just half its original height – but the site is very atmospheric and interesting, is surrounded by many other remains and is well worth exploration.

Jackie, our long-standing Tolon representative, has always been a fan of Nemea. In ancient Greek mythology, Herakles (Hercules) overcame the lion that lived in Nemea. In 300 BC, the Temple of Zeus was constructed; its setting is truly evocative of ancient times, despite only three pillars remaining upright (they are visible from a long distance); many other sections of ancient pillars can be seen lying on the ground around the original base of the temple.

In 1974, Professor Stephen Miller, an American from Berkeley University, California, began digging at Nemea. He had purchased the site where he knew the famous stadium of Nemea was located (he had seen aerial shots that revealed an oblong outline) – but he had no idea then that his findings would overturn archaeological thinking of the time or would take over his life to such an extent (he now lives in the village of Nemea).

The stadium at Nemea was one of four locations where the Pan-Hellenic Games, forerunners of today’s Olympic Games, were held as far back as 573 BC; the games rotated on a four-yearly cycle from Olympia to Delphi (home of the Oracle), and from Corinth to Nemea before returning to Olympia. Professor Miller was one of the key movers in the revival of the Nemean Games, which are run (barefoot) on the original stadium floor every four years; it’s a hugely exciting event – a sort of sports day for families and adults alike – attended by over one hundred different nationalities worldwide. It’s totally uncommercialised and well worth visiting (see www.nemeangames.org) or, indeed, participating in – an experience you are unlikely ever to forget. Scheduled this year for 10th and 11th June 2016, with an opening ceremony at the Temple of Zeus featuring soldiers in full ancient Spartan armour, the next Modern Nemean Games will be held in June 2020. 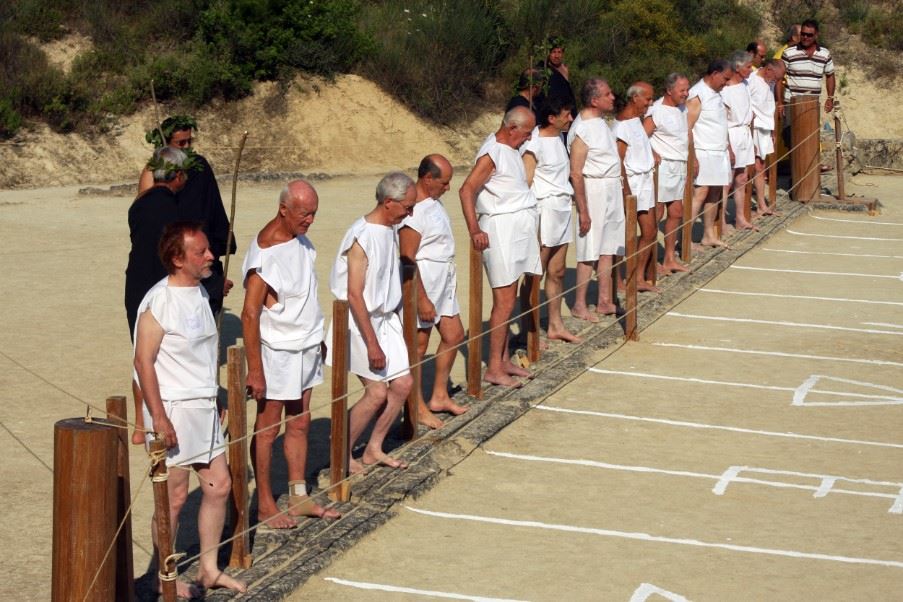 THE THOLOS MYCENAEN TOMB, Tzanata on Kefalonia
Many of the historic sites of Kefalonia were destroyed or damaged in the earthquake of 1953. One site however, that can be visited – and recommended by our local representative Cheryl – is the site of Tholos near Tzanata. It is the largest known Tholos (beehive shaped) tomb in the Ionian Islands measuring 7 metres across and 4 metres deep. It is believed to be the resting place of a ruler from the Mycenaean period (13th century BC) as royal seals, golden jewellery and precious stones were found here. The artefacts are now on display at the Archaeological museum in Argostoli.

Travel to and within Europe from 01Jan21 Booking a holiday IS legal Peace of Mind Promise for 2022 Happy New Year from the Sunvil family Subbetica - the home of award winning olive oil All for the love of travel | 8 reasons to visit Cyprus this autumn
All for the love of travel | A warm welcome at the Axiothea awaits All for the love of travel | Our 50th birthday All for the love of travel | Looking forward All for the love of travel | My most memorable trip - Noel Josephides All for the love of travel | Noel Josephides Travel to a lesser-known destination with Sunvil and get more 'bang for your buck' Gigantes and grilled lamb - a real taste of the southern Peloponnese Kalamaki Villas: The perfect choice for a comfortable and relaxing holiday in the real Greece No-deal warning: don’t go on holiday after March 29 2019 | Sunvil's response Introduction to Castilla y Leon Spring and Easter in the beautiful Peloponnese Project Kalamaki Villas in Chrani Noel's trip to Uruguay and Argentina Why now is a good time to go to Greece The truth behind the headlines: Migrants in Greece Reviving the Olympic Spirit – the Nemean Games 2016 The Michelin Star of the North The Alternative, Real Algarve The latest financial shenanigans in Greece The Chilean Wilderness at its very best Celebrating 25 years of operating to the Azores Slaying Greek Myths Santiago de Chile The Atacama Desert Dot com or dot con? Don’t be a victim of holiday fraud Tolon revisted Stockholm: An affordable city break Who can you trust? The downside of flying on no-frills flights… The Revival of the Nemean Games EU referendum: What effect will the result have on your 2016 summer holiday? Paphos – European Capital of Culture 2017