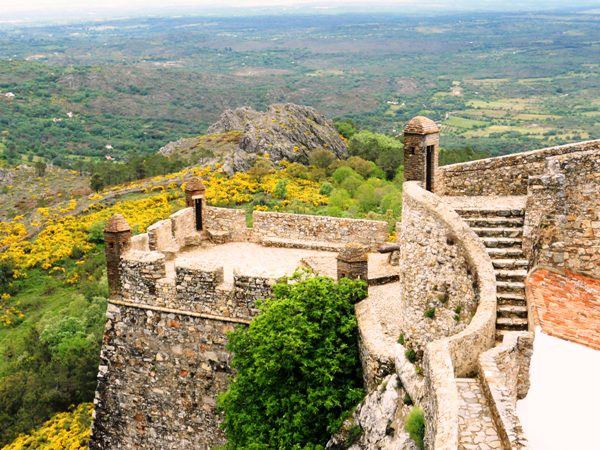 Take a drive through the Alentejo region of Portugal and it’s hard to imagine the area as a war zone. Storks’ nests hang precariously on telegraph poles, goats stand idly under cork tree, making the most of the only shelter available from the midday sun. And people go about their business at a gentle pace, passing the day outside traditional cafes. Even drivers in the Alentejo mercifully ignore the fast-paced, horn-tooting behaviour for which the drivers of southern Europe are so notorious.

And yet much of rural Portugal was at one time an active battlefield. The Moors took control of the area in the 9th century, before the Christian Reconquest in the 12th century. After that, the Spanish and Portugal were trading blows while at the same time carving up the world in their colonial conquests. And it is in this climate of animosity that a whole series of fortified towns sprung up across the country, particularly along its hilly border with Spain.

One of the highlights of a trip to the Alentejo is the chance to explore these walled towns and cities, which are now popular tourist attractions as well as an important part of Portuguese heritage. Perhaps the most spectacular, and certainly one which offers splendid views, is the hilltop town of Marvão .

In the north-east of the Alentejo and only a few kilometres from the Spanish border, Marvão is named after Ibn Maruan, a Muslim ruler from the Moorish times. In the 12th and 13th centuries, the town was an important base for Christian soldiers as they regained control of the region. Marvão today is a perfect walled town, a shining example of conservation and restoration.

Visitors park outside and below the walls, and then climb up the steep paths which lead to Marvão’s heart. From the fort at the top of the town, the views stretch out in all directions, eastward to Spain and south across the empty Alentejan plains. Standing at this windswept lookout point (the wind provided a welcome cooling touch when we visited), it’s hard not to be impressed by the people who built this hilltop fortress. Below on all sides leading down to the plains is a sharp craggy landscape; the task of dragging quarried rocks up to Marvão would have been no easy task.

If you follow the other visitors, you’ll climb to the top of the fortified walls and admire the views. You can wander along a large section of the wall, before exploring the narrow lanes which just about separate the white-washed houses. Within the old buildings are a few cafes and restaurants which offer uncomplicated traditional produce from the Alentejo. Fuelled by migas or bacalhao, you’ll be ready to tackle those old walls and streets again and experience the magical changing light across the far-reaching landscape.

You can visit Marvão as part of the Pousadas of the Alentejo itinerary, and stay at the Pousada de Santa Maria within the old town walls. The major advantage of staying in the town is that when the day-trippers have left, you’ll have the narrow streets and alleys pretty much to yourself for an evening stroll. Weather permitting, the sunset from the lofty fortifications across the plains is worth the stay alone.

Travel to and within Europe from 01Jan21 February 2017 Sunvil Supper Club – Feijoada Choco Dot com or dot con? Don’t be a victim of holiday fraud Highlights of Northern Portugal Algarve beyond the beach resorts Sagres – the end of the world
The Queen’s 90th Birthday: A Royal Visit February 2016 Sunvil Supper Club – Fish and Shellfish Cataplana June 2016 Sunvil Supper Club – Octopus à lagareiro Houseboat rental on the Alqueva reservoir The Coronavirus | Airports Highlights of Central Portugal (Centro) A parting shot or two (to Faial). Part Four. Culinary delights of the Alentejo region of Portugal All for the love of travel | My Azores - Sue John Discover the Alentejo: An Illustrated Map The Gentle Rhythms of the Alentejo Countryside- A guest blog by Benedict Allen EU referendum: What effect will the result have on your 2016 summer holiday? All for the love of travel | Looking forward Highlights of Aveiro – the Venice of Portugal Azores, Cascais and Lisbon – a family adventure by Emma Macfarlane Where to go on holiday in March The Michelin Star of the North Alentejo Wine routes The Coronavirus | Portugal Evora - my impressions of this beautiful city. Guest blog by Jo Rogers All for the love of travel | Portugal Highlights of Lisbon All for the love of travel | Our 50th birthday Spring forward to one of our many favourite destinations in 2018 All for the love of travel | Family time in the Algarve All aboard! Sunvil’s top 8 railway journeys throughout Europe and Latin America.  Where to go on holiday in June Portugal... what not to miss Aldeia da Luz: The village that moved Where to go on holiday in October Mertola and the Mina de Sao Domingos Our top five scenic fly-drive holidays Notes from the field – Northern Portugal Illustrated Map: The Wine Growing Regions of Portugal The most westerly island of Europe: Flores, a hiker’s paradise Climbing Pico, Portugal’s highest mountain The Coronavirus | The latest news and advice Alentejo for foodies The Alternative, Real Algarve Extremadura - a hidden treasure in western Spain bordering Portugal Portugal Passenger Locator Card The Rota Vicentina Whale & lava wine… Pico Island. Part Three. Booking a holiday IS legal Green means go. Amber means...? Read more inside The Algarve – Our Top 10 Cultural attractions Pastel de Nata – more than just a dessert All for the love of travel | Dreaming of our post-lockdown travels Tips for travelling post-lockdown Exploring the Douro Valley in Portugal Where to go on holiday in January Top 7 attractions of the Azores The Azores and their long connection with cheese All at Sea... looking for leviathans. Part Two. 10 things you didn’t know about the Azores Notes from the field – the Algarve Put quite simply the Azores are stunning A look forward to summer 2021 Discover the real Madeira Highlights of the Algarve Alentejo for Culture Vultures The Alentejo - hidden Portugal Alentejo - Guest Blog by Mary Novakovich Where to go on holiday in July Our top 5 destinations for wine lovers