Highlights of Aveiro – the Venice of Portugal 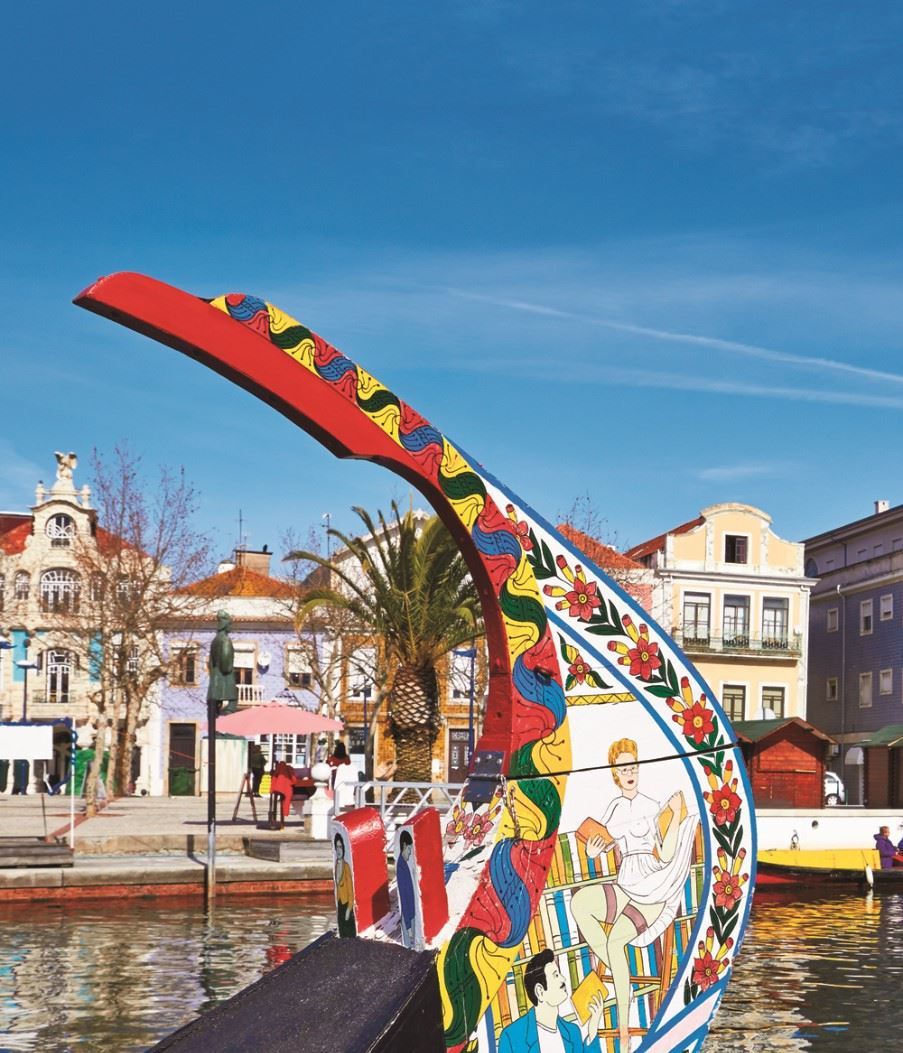 Portugal certainly isn’t one of Europe’s biggest countries by size, and most visitors spend their time either on the beaches of the Algarve or in the lively streets of the historic capital, Lisbon. As a result, the rest of the country offers a pleasant, unhurried experience for those who choose to explore beyond the main attractions. Best of all, Portugal has many places which I suspect, if you put them in Italy or France, would attract many times the number of visitors they receive.

One such example is the city of Aveiro, some 5o miles south of Porto. Once an important sea port at the mouth of the Rio Vouga estuary, the city’s fortunes took a nose-dive after a major storm in the 16th century blocked the mouth of the river, creating a lagoon and swampland between the residents and the Atlantic. The population dwindled over the next 200 years, before a canal was constructed to restore Aveiro’s link the sea. The city recovered and became prosperous again, with wealthy merchants and businessmen building fancy homes along the city’s waterfronts.

Whether the label ‘Venice of Portugal’ is appropriate is open for debate, but what is undeniable is that Aveiro is an attractive, laid-back city with a rich history and plenty to warrant a few days of exploration. Here’s a quick look at some of the city’s highlights.

Keeping with the Venice analogy, Aveiro’s answer to the gondola is the moliceiro. These colourful boats were originally employed to gather seaweed from the lagoon for use as a fertiliser. Nowadays their only cargo is tourists, and one of the main activities in Aveiro is a boat trip around the city’s canals to enjoy its many fine buildings from the water.

The city’s renewed wealth came about at the turn of the 20th century – as a result, Aveiro now has one of western Europe’s best collection of art nouveau architecture. Take a walk (or a canal trip) to admire some of the more eye-catching buildings. Older than the art nouveau buildings but just as impressive, is the cathedral, covered in classic azulejo tiles and boasting an elaborate facade. Even older is the Jesus Monastery, set up as a female Dominican convent in the 15th century, and now home to the Aveiro Museum.

While a visit to a local fish market typically offers a noisy if somewhat smelly slice of local life, the real attraction in Aveiro’s fish market is the restaurant on site, which offers fresh, reasonably-priced seafood lunches in a buzzing atmosphere – you’re just as likely to sit with locals and students as you are with fellow visitors to the city.

One of the main attractions of Aveiro, for Portuguese visitors at least, are the sandy beaches within easy reach of the city centre. Pretty wooden beach houses line the sandy spit, and the Atlantic waves are popular with surfers, while the inland lagoon is a favoured spot for windsurfing and kayaking. Even if you’re not one to spend a day lazing on the beach, the dunes offer plenty of hiking and are a home to a rich diversity of wildlife.

Travel to and within Europe from 01Jan21 February 2017 Sunvil Supper Club – Feijoada Choco Dot com or dot con? Don’t be a victim of holiday fraud The Coronavirus | Airports Highlights of Northern Portugal Algarve beyond the beach resorts
Sagres – the end of the world The Queen’s 90th Birthday: A Royal Visit February 2016 Sunvil Supper Club – Fish and Shellfish Cataplana June 2016 Sunvil Supper Club – Octopus à lagareiro The Coronavirus | Portugal Houseboat rental on the Alqueva reservoir Highlights of Central Portugal (Centro) A parting shot or two (to Faial). Part Four. Culinary delights of the Alentejo region of Portugal Marvao - a marvellous hilltop fortress All for the love of travel | My Azores - Sue John Discover the Alentejo: An Illustrated Map The Gentle Rhythms of the Alentejo Countryside- A guest blog by Benedict Allen EU referendum: What effect will the result have on your 2016 summer holiday? All for the love of travel | Looking forward Azores, Cascais and Lisbon – a family adventure by Emma Macfarlane Where to go on holiday in March The Michelin Star of the North Alentejo Wine routes Evora - my impressions of this beautiful city. Guest blog by Jo Rogers All for the love of travel | Portugal Highlights of Lisbon The Coronavirus | The latest news and advice All for the love of travel | Our 50th birthday Spring forward to one of our many favourite destinations in 2018 All for the love of travel | Family time in the Algarve All aboard! Sunvil’s top 8 railway journeys throughout Europe and Latin America.  Where to go on holiday in June Portugal... what not to miss Aldeia da Luz: The village that moved Where to go on holiday in October Mertola and the Mina de Sao Domingos Our top five scenic fly-drive holidays Notes from the field – Northern Portugal Illustrated Map: The Wine Growing Regions of Portugal The most westerly island of Europe: Flores, a hiker’s paradise Tips for travelling post-lockdown Climbing Pico, Portugal’s highest mountain Alentejo for foodies The Alternative, Real Algarve Extremadura - a hidden treasure in western Spain bordering Portugal Portugal Passenger Locator Card The Rota Vicentina Whale & lava wine… Pico Island. Part Three. Booking a holiday IS legal Green means go. Amber means...? Read more inside The Algarve – Our Top 10 Cultural attractions Pastel de Nata – more than just a dessert All for the love of travel | Dreaming of our post-lockdown travels Exploring the Douro Valley in Portugal Where to go on holiday in January Top 7 attractions of the Azores The Azores and their long connection with cheese All at Sea... looking for leviathans. Part Two. 10 things you didn’t know about the Azores Notes from the field – the Algarve Put quite simply the Azores are stunning A look forward to summer 2021 Discover the real Madeira Highlights of the Algarve Alentejo for Culture Vultures The Alentejo - hidden Portugal Zambujeira do Mar: the delights of Portugal’s Alentejo Coast Alentejo - Guest Blog by Mary Novakovich Where to go on holiday in July Our top 5 destinations for wine lovers