One of the many joys of exploring the Alentejo region of Portugal is the unsung discoveries which you can so easily stumble across. On the two occasions I’ve hired a car in the Alentejo I’ve found villages for which there’s precious little in the way of tourist information, and yet in which I’ve discovered buildings, monuments or just stories which have stayed in the memory long after I’ve come home.

One such example is the town of Mertola, less than 20km from the Spanish border. As with many border towns in this region the whitewashed houses are overlooked by a stone fortress; in this case a 13th-century construction built on the site of the former alcáçova (citadel). The citadel is in itself a metaphor for Mertola’s history: it was originally the site of a Roman forum and later a grand home for one of the town’s Moorish rulers. Looking down on the Rio Guadiana, this fortress was for much of the medieval period an important part of the Portuguese defences against its eastern rival. Now, along with the high stone wall which encircles Mertola, it serves as a prominent symbol of the town’s rich heritage. Mertola is considered by many to be finest of the walled towns of the Alentejo, and its streets have changed remarkably little since Moorish times. You can find the Moorish influence throughout the town’s civic buildings, while the town museum (housed in a 600-year-old granary) has an important collection of Islamic art. Most fascinating of all is the Igreja Matriz, which began life as a mosque and which still carries many of the tell-tale symbols of Moorish style.

Mertola celebrates its Moorish heritage every two years during the Islamic Festival, when the town’s streets are temporarily transformed into an open-air souk. The programme includes music, recitals and of course food, and is designed as a celebration of an important part of Iberian history.  A few miles outside of Mertola, the tiny village of Mina de Sao Domingos can barely rustle up enough activity to warrant the label ‘sleepy’. In its heyday however it would have been a thriving town of around 15,000 people, attracted to the area by the prospect of making money from the town’s mine. The Romans first mined the area for gold and silver and in more recent years it was copper which drove the fortunes of Mina de Sao Domingos. Run for a while in the 19th century by British firm Mason and Barry, the mine brought prosperity in the form of a railway, a hospital and even electricity generators (Portugal’s first) to the town.

Nowadays the ruins of the mine buildings are all that remain, but for those interested in industrial heritage the site is open for visitors and can be explored on a guided tour. There’s even an English cemetery, where some of the mine’s managers were laid to rest. 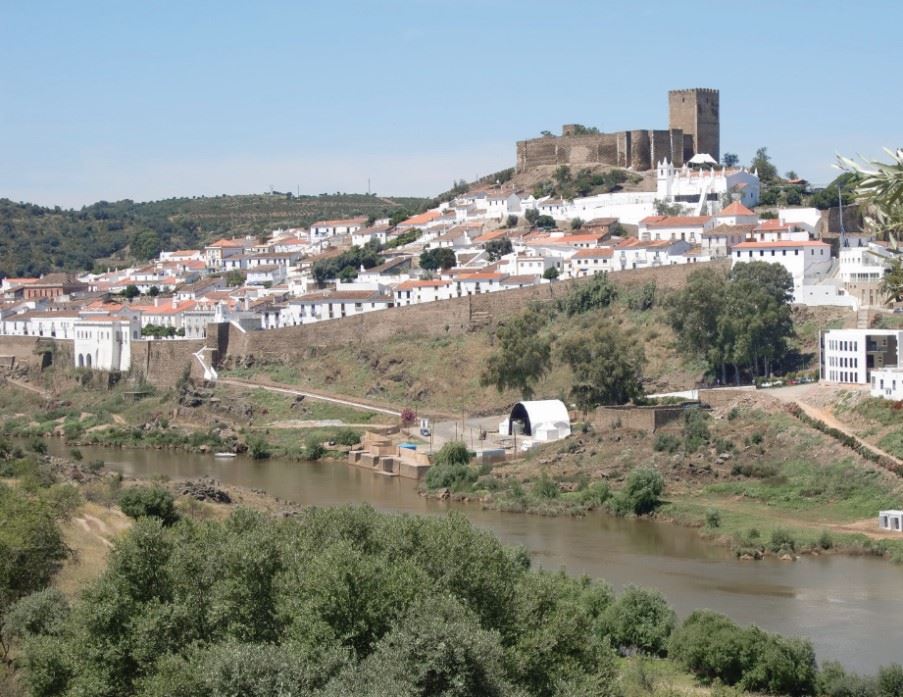 February 2017 Sunvil Supper Club – Feijoada Choco Dot com or dot con? Don’t be a victim of holiday fraud Highlights of Northern Portugal Algarve beyond the beach resorts Sagres – the end of the world The Queen’s 90th Birthday: A Royal Visit
February 2016 Sunvil Supper Club – Fish and Shellfish Cataplana June 2016 Sunvil Supper Club – Octopus à lagareiro The Coronavirus | Airports Highlights of Central Portugal (Centro) A parting shot or two (to Faial). Part Four. Marvao - a marvellous hilltop fortress All for the love of travel | My Azores - Sue John EU referendum: What effect will the result have on your 2016 summer holiday? All for the love of travel | Looking forward Highlights of Aveiro – the Venice of Portugal Azores, Cascais and Lisbon – a family adventure by Emma Macfarlane The Michelin Star of the North Highlights of Lisbon All for the love of travel | Our 50th birthday All for the love of travel | Family time in the Algarve All aboard! Sunvil’s top 8 railway journeys throughout Europe and Latin America.  Where to go on holiday in June Aldeia da Luz: The village that moved Where to go on holiday in October Our top five scenic fly-drive holidays Notes from the field – Northern Portugal Illustrated Map: The Wine Growing Regions of Portugal The most westerly island of Europe: Flores, a hiker’s paradise Climbing Pico, Portugal’s highest mountain The Coronavirus | The latest news and advice The Alternative, Real Algarve Extremadura - a hidden treasure in western Spain bordering Portugal Whale & lava wine… Pico Island. Part Three. Booking a holiday IS legal Green means go. Amber means...? Read more inside The Algarve – Our Top 10 Cultural attractions Pastel de Nata – more than just a dessert All for the love of travel | Dreaming of our post-lockdown travels Tips for travelling post-lockdown Exploring the Douro Valley in Portugal Top 7 attractions of the Azores The Azores and their long connection with cheese All at Sea... looking for leviathans. Part Two. 10 things you didn’t know about the Azores Notes from the field – the Algarve Put quite simply the Azores are stunning A look forward to summer 2021 Discover the real Madeira Highlights of the Algarve Where to go on holiday in July Our top 5 destinations for wine lovers Where to go on holiday in November Rota Vicentina: The Alentejo and The Algarve Travel to and within Europe from 01Jan21 Houseboat rental on the Alqueva reservoir Culinary delights of the Alentejo region of Portugal Discover the Alentejo: An Illustrated Map The Gentle Rhythms of the Alentejo Countryside- A guest blog by Benedict Allen Where to go on holiday in March Alentejo Wine routes The Coronavirus | Portugal Evora - my impressions of this beautiful city. Guest blog by Jo Rogers All for the love of travel | Portugal Spring forward to one of our many favourite destinations in 2018 Portugal... what not to miss Alentejo for foodies Portugal Passenger Locator Card The Rota Vicentina Where to go on holiday in January Alentejo for Culture Vultures The Alentejo - hidden Portugal Alentejo - Guest Blog by Mary Novakovich