Exploring the Douro Valley in Portugal 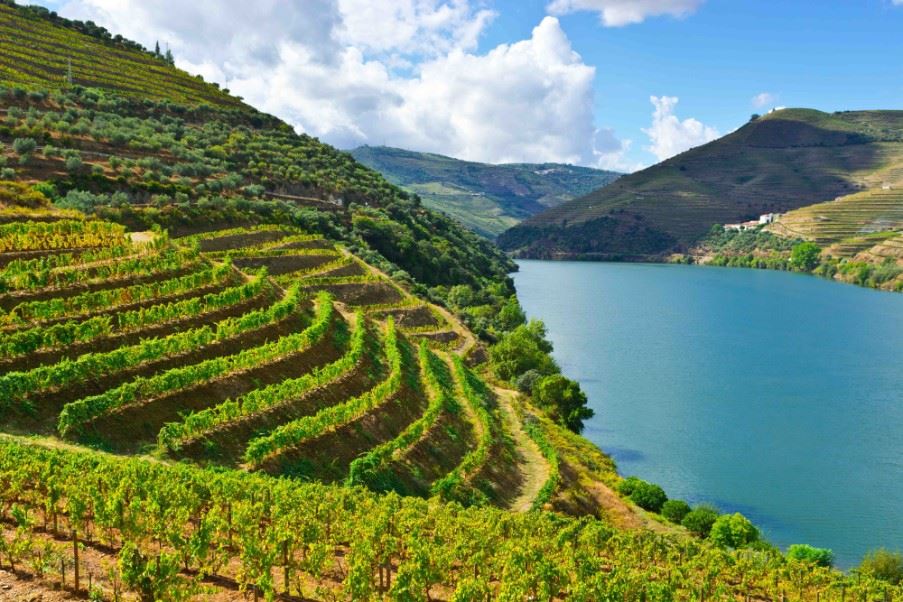 The Douro is the longest river in the Iberian Peninsula and although it has its source and the bulk of its course in Spain, many would argue that its most scenic section is in the wine lands of northern Portugal. By the time it spills out into the Atlantic Ocean in Porto its width is impressive, but further upstream between the towns of Mesao Frio and Pinhao, the deep valley and the twists and turns of the Douro have created a pleasing, contoured landscape that’s perfect for exploring.

So what you can see and do on a holiday in the Douro Valley? Here are a few of the highlights:

Without doubt the main reason why people visit the Douro Valley is to explore (and sample) the region’s famous tipples. It is here that port originated and while it’s still a source of much pride locally, there are also a healthy range of unfortified wines produced in the valley.

The distinctive terraced landscape which dominates the Douro Valley is testament to the many centuries of viticulture, creating flat areas from a steep hill to allow the vines to flourish. You can visit an interactive museum at the Quinta da Avessada enoteca in Alijó to learn about the story of wine production in the region. They have a restaurant and organise tastings. At the nearby Museu das Caves de Santa Marta de Penaguião you can learn more about the traditional methods of production and see some of the old apparatus used by local farmers. In fact across the region you’ll find many small makeshift collections of vineyard paraphernalia, allowing visitors not only to learn about the history of the region, but also to appreciate just how much of an integral part of the Douro’s economic and cultural fabric wine has always been.

Exploring by car is of course the easiest and most flexible way, although unless you have a teetotal driver, the vineyard stops will be frustrating for the one who pulls the short straw. There are designated wine routes to follow, linking both vineyards and wine cellars.

The railway line runs for a lengthy stretch along the Douro, allowing passengers to sit back and enjoy the views from the comfort of their carriage. Better still, during the summer season a special historic train covers the 30-mile stretch between Régua and Tua (around 70 minutes each way), with a steam engine pulling a set of old wooden carriages along the scenic route.

Cruise on the Douro

Not surprisingly it’s easy to jump on a boat and take a slow trip along the Douro, soaking up the views on both sides while, if you wish, sipping some of the produce of its banks. There are multi-day river cruises, but by far the most popular option is to take one of the many short trips on offer, many of which include a meal during the cruise.

Last but not least, this is a great place to explore by your own steam, with walking trails and cycle routes following the path of the river and providing a perfect blend of isolation and visits to the points of interest along the way. And many would argue that there’s no better way to enjoy a wine-tasting tour than to do it on foot, allowing you to soak up the scenery and fruits of the vineyards while not worrying about drinking and driving.

Travel to and within Europe from 01Jan21 February 2017 Sunvil Supper Club – Feijoada Choco Dot com or dot con? Don’t be a victim of holiday fraud Highlights of Northern Portugal Algarve beyond the beach resorts Sagres – the end of the world
The Queen’s 90th Birthday: A Royal Visit February 2016 Sunvil Supper Club – Fish and Shellfish Cataplana June 2016 Sunvil Supper Club – Octopus à lagareiro Houseboat rental on the Alqueva reservoir The Coronavirus | Airports Highlights of Central Portugal (Centro) A parting shot or two (to Faial). Part Four. Culinary delights of the Alentejo region of Portugal Marvao - a marvellous hilltop fortress All for the love of travel | My Azores - Sue John Discover the Alentejo: An Illustrated Map The Gentle Rhythms of the Alentejo Countryside- A guest blog by Benedict Allen EU referendum: What effect will the result have on your 2016 summer holiday? All for the love of travel | Looking forward Highlights of Aveiro – the Venice of Portugal Azores, Cascais and Lisbon – a family adventure by Emma Macfarlane Where to go on holiday in March The Michelin Star of the North Alentejo Wine routes The Coronavirus | Portugal Evora - my impressions of this beautiful city. Guest blog by Jo Rogers All for the love of travel | Portugal Highlights of Lisbon All for the love of travel | Our 50th birthday Spring forward to one of our many favourite destinations in 2018 All for the love of travel | Family time in the Algarve All aboard! Sunvil’s top 8 railway journeys throughout Europe and Latin America.  Where to go on holiday in June Portugal... what not to miss Aldeia da Luz: The village that moved Where to go on holiday in October Mertola and the Mina de Sao Domingos Our top five scenic fly-drive holidays Notes from the field – Northern Portugal Illustrated Map: The Wine Growing Regions of Portugal The most westerly island of Europe: Flores, a hiker’s paradise Climbing Pico, Portugal’s highest mountain The Coronavirus | The latest news and advice Alentejo for foodies The Alternative, Real Algarve Extremadura - a hidden treasure in western Spain bordering Portugal Portugal Passenger Locator Card The Rota Vicentina Whale & lava wine… Pico Island. Part Three. Booking a holiday IS legal Green means go. Amber means...? Read more inside The Algarve – Our Top 10 Cultural attractions Pastel de Nata – more than just a dessert All for the love of travel | Dreaming of our post-lockdown travels Tips for travelling post-lockdown Where to go on holiday in January Top 7 attractions of the Azores The Azores and their long connection with cheese All at Sea... looking for leviathans. Part Two. 10 things you didn’t know about the Azores Notes from the field – the Algarve Put quite simply the Azores are stunning A look forward to summer 2021 Discover the real Madeira Highlights of the Algarve Alentejo for Culture Vultures The Alentejo - hidden Portugal Alentejo - Guest Blog by Mary Novakovich Where to go on holiday in July Our top 5 destinations for wine lovers