Evora - my impressions of this beautiful city. Guest blog by Jo Rogers 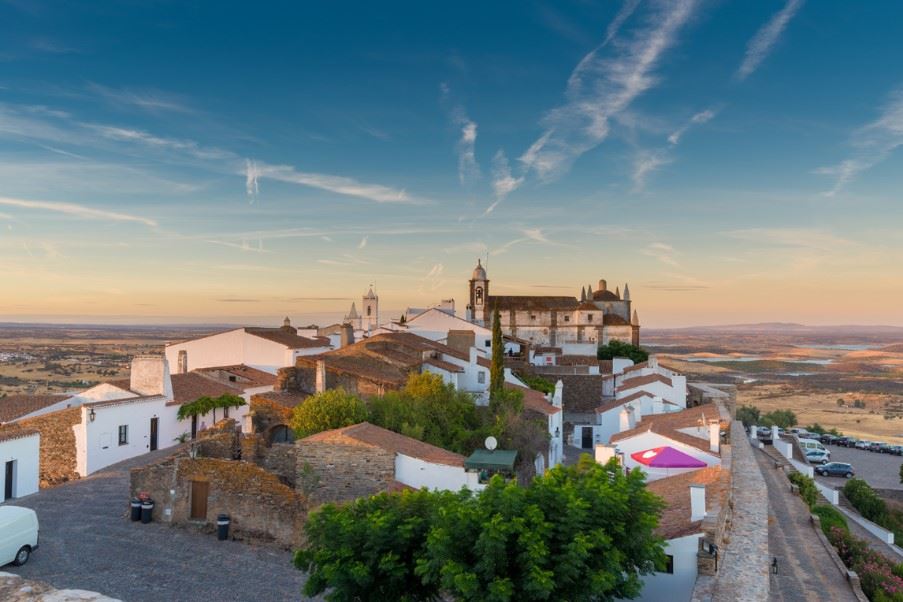 This was a first visit to Portugal for me and as we left Lisbon via the spectacular Vasco da Gama Bridge and headed east, I was quite unprepared for such an expanse of untouched countryside.  Mile after mile of uninhabited land - a canvas of dry brown earth, scorched fields and the thousands of evergreen cork trees as far as the eye could see. Évora stands on a rocky hilltop rising above the Alentejo plain.  At the highest point within the city was our destination: the Pousada Convento de Évora which has made its home in a converted monastery. And what a setting! Sitting on one side of a cobbled square, it is surrounded by the best of this Unesco World Heritage city.  It rubs shoulders with the palace of the Dukes of Cadaval, the museum of Évora, a small park with a spectacular view across the city, the cathedral and, of course, the so-called Temple of Diana – in fact an ego-boosting edifice for a Roman emperor. 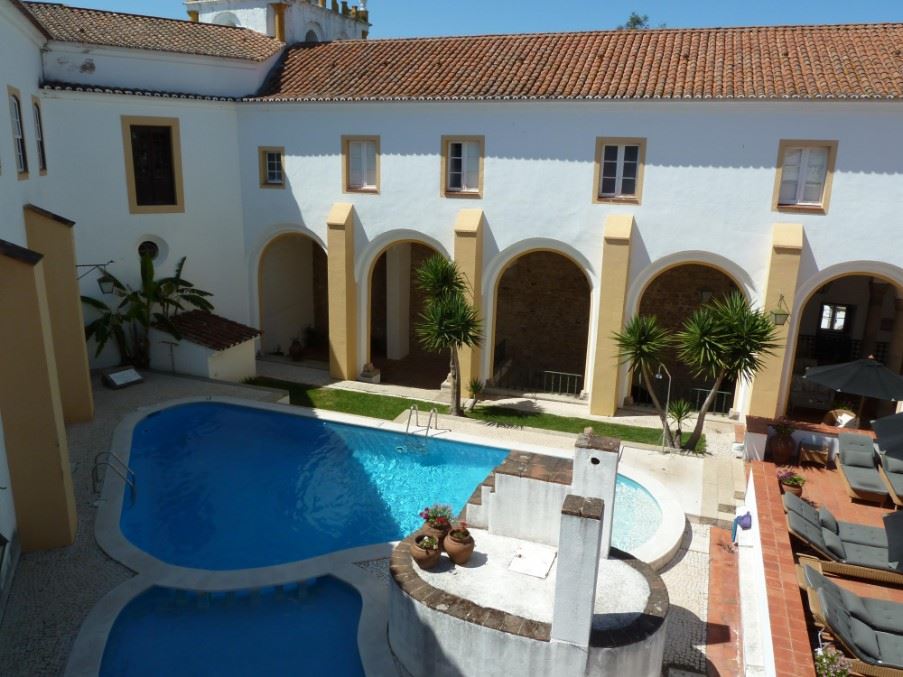 The interior of the pousada is worthy of a museum, from where, in fact, many of the artefacts come.  A huge tapestry hangs aside the stone stairs; the white-washed corridors overlooking the cloisters have pieces of furniture, sconces and decorations which would not come amiss in a bishop’s palace.  Our “cell”, the biggest in the pousada, had a foyer in which sat the largest metal cooking pot I have ever seen.  One could almost see the monk in charge of the kitchen stirring his Alentejan soup to fill the empty bellies of his fellow monks.

Quite rightly, any nods to the modern tourist – a small pool and a bar - are discreetly placed and incidental to the overall historic charm of the place. We were treated like well-loved friends.  Our routine was quickly noted: out in the mornings, back for my husband’s afternoon siesta after lunch, so our room was serviced while we were absent.  My husband celebrated his 81st birthday whilst we were there and Reception noted the date from his passport.  To our great surprise, two beaming members of staff presented him with a beautifully decorated cake (with candle!), fruit and a bottle of sparkling wine to celebrate.  Now that’s service! 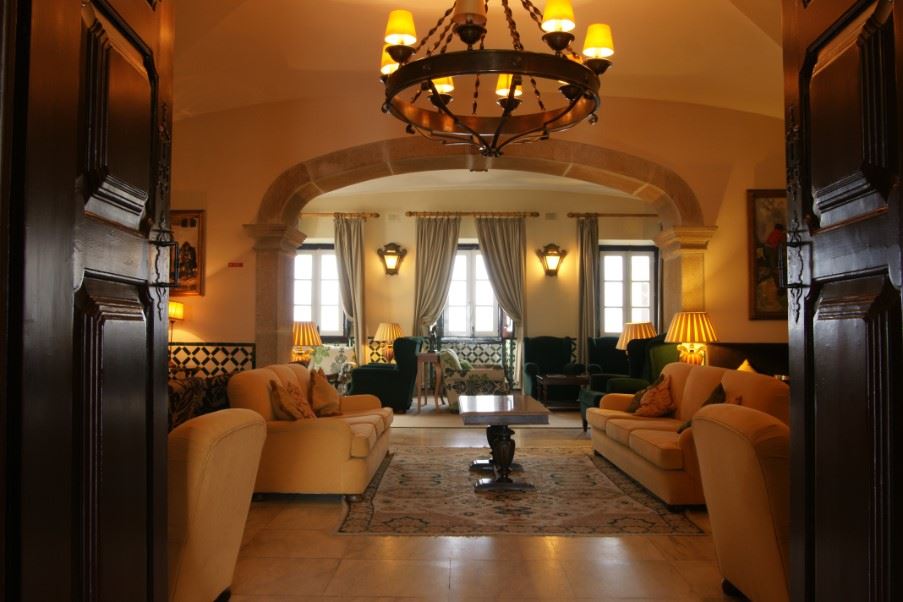 So how did we fill our week?  Contrary to my fears, my husband took the challenge of cobbles and stone stairs in his stride.  When we were tired, there were taxis to take us back to the pousada, the rides an experience in themselves as we sped up narrow alleyways barely wide enough for a couple of pedestrians.  The taxi drivers were a joy, calling “No hurry – take your time” to my slow-paced husband.  An occasional one spoke ebullient English and was delighted with our enthusiasm for his city.
Évora Museum made for a very interesting morning’s browsing – lots to see, some fine paintings, all contained in a ubiquitous pristine white building with yellow-rimmed windows and doors.

The cathedral was an interesting mish-mash of styles.  A gloomy interior led one towards several ornately bright chapels, none of which one could enter.  Whilst my husband rested under the (unique) statue of a highly pregnant Virgin Mary, I made it up the spiral stairs to the Terrace or roof where the views in all directions across the plains were simply amazing. I could have wandered around much longer but the opportunity arose to join a large group of beefy Portuguese descending the stairs and I took it – safety in numbers is the rule on spiral stairs.  Those waiting to ascend stood no chance against such a formidable crowd – and me.

On Sunday, a couple of days after we arrived, we found ourselves resting outside the cathedral shortly before the evening service.  Rows of chairs had been assembled and suddenly to the sound of loud music, a fine brass band marched up to the West door.  We watched as they broke ranks to check their phones, smoke cigarettes and greet their friends while a sound engineer spent an inordinate amount of time adjusting microphones, attaching cables and consulting with the conductor.  After about an hour, the band reassembled, played two very short pieces and dispersed, full of pride at a job well done. Just as entertaining was watching the faithful assemble for the service. There were tourists in skimpy tops and shorts, elderly couples, dressed in their sober best, young lovers, she in her summer finery, he in his shiny Sunday two piece. And handsome young priests, tall and severe, all in black. Of tourists, we were in a minority. We heard almost no English voices.  There were a few Americans, more Europeans and a great many from China and Japan.  The latter moved in flocks and at speed, trophy-snapping with their phones (the rule being: see a plaque or a statue, capture it with a click and hurry on).  When they get home, do they organise everything into a scrapbook labelled Évora? Do they even remember that they were in Évora?

Tourists abound but there is no pandering to them.  The restaurants often have a limited menu, serving authentic Alentejan dishes, freshly cooked and delicious.  The gift shops are full of brightly-coloured, pretty ceramic ware or beautifully crafted cork and linen goods.  No-one hassles you to buy or tries to entice you into a café.  The joy is in the wandering and the discovery.

Black pork - a real taste of the Alentejo 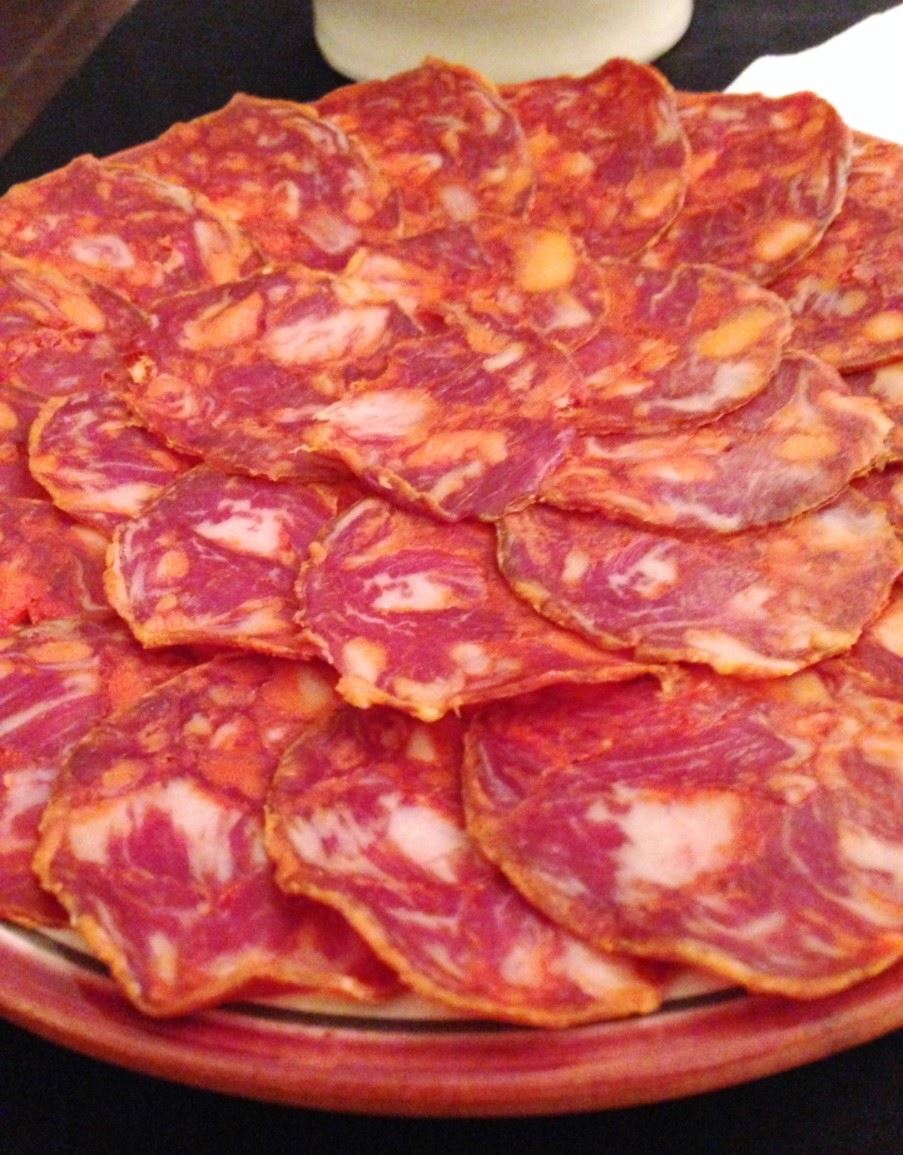 One such wandering brought us to the church of Miseracórdia. We work on the principle that every church is worth a visit but were quite unprepared for what lay behind a somewhat unprepossessing exterior. Here were riches indeed.  The interior is bathed in light and dominated by the ornate golden Baroque altarpiece on the far wall.  Paintings round the upper walls are juxtaposed with exquisite azulejos below: intricate blue Portuguese tilework, depicting Biblical scenes. It is one of the most elegant and pretty churches I have ever seen.

Our daily walks would inevitably take us down to the Praça do Giraldo where we would drink our coffee and people-watch, always a satisfying occupation when abroad.  The grisly history of the autos de fe conducted here by the Portuguese Inquisition seems far distant from the sunny outdoor cafes filled with those resting in the shade of huge parasols.  I shall always treasure the memory of the little waiter who seemed incapable of delivering a correct order.  Poor man had a look of perpetual puzzlement on his face as yet another tray was greeted with shaking heads from his customers. My Spanish came in useful for reading the written word but not so much for understanding what I heard. Gone were the staccato sounds of Spanish; instead the soft shooshing of spoken Portuguese. How on earth did two countries joined by a long border on one peninsula develop such disparate-sounding languages?  I felt the need to apologise each time Spanish slipped out as though I’d made an extremely tactless remark at a cocktail party. 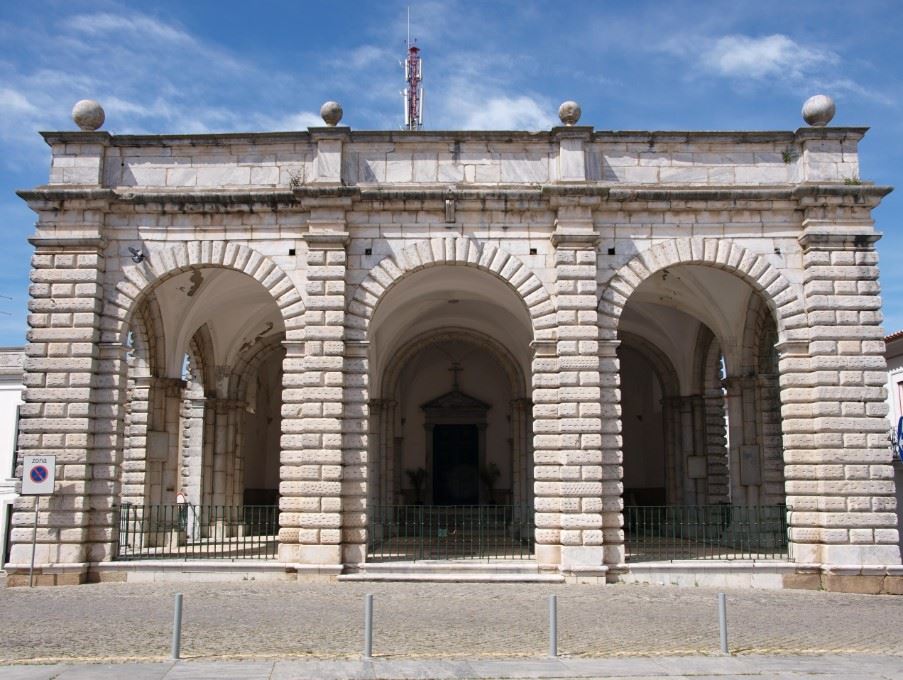 We eschewed the horse-drawn carriages and tuk tuks to take the City bus tour which showed us parts of the city we would have otherwise missed.  If we had been more athletic, we would have walked further and seen more but we were content.

The chief highlight was hiring a driver to take us to the Almendres megalithic site with its standing stones and menhirs some dozen kilometres from Évora. We were lucky enough to have a delightful lady called Louisa as our driver and guide.  She was wonderfully patient with our requests for photo stops: cows, trees, abandoned churches all assume a different photogenic quality away from home. And the storks! Once noticed, their nests were everywhere: atop bell towers, up pylons, balanced on telegraph poles. And look! – a pair like stilt walkers picking their way across a field.

A stork in its nest is a common sight in Evora 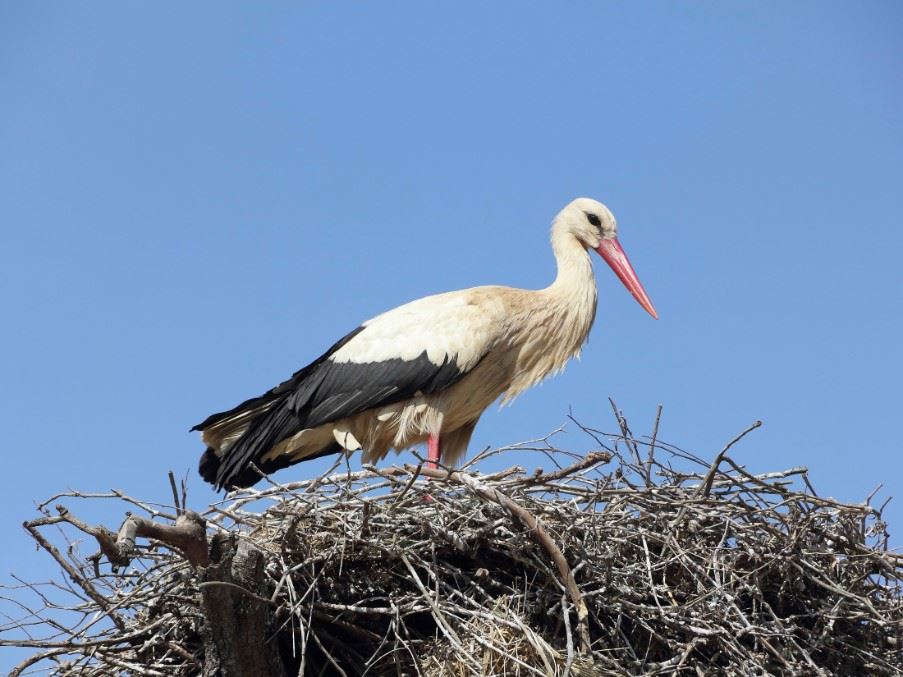 Even before we reached the standing stones, there were wild flowers and herds of cows to admire. And so many cork trees, their trunks like the legs of shorn sheep, marked with the year of their harvesting. Number 16 – you have a few years to develop and grow before you are stripped again of that amazing commodity which seems to adapt itself to any manufacture from tough table mats to calfskin-soft wallets. We were fortunate to be at the site of the standing stones before anyone else. Set in a high glade, it has a magical aura. Touching marks carved by a hand in the 6th millennium BC is an experience never to be forgotten.  So many stones, clustered like members of an orderly audience; so many questions that cannot be answered, only guessed at. 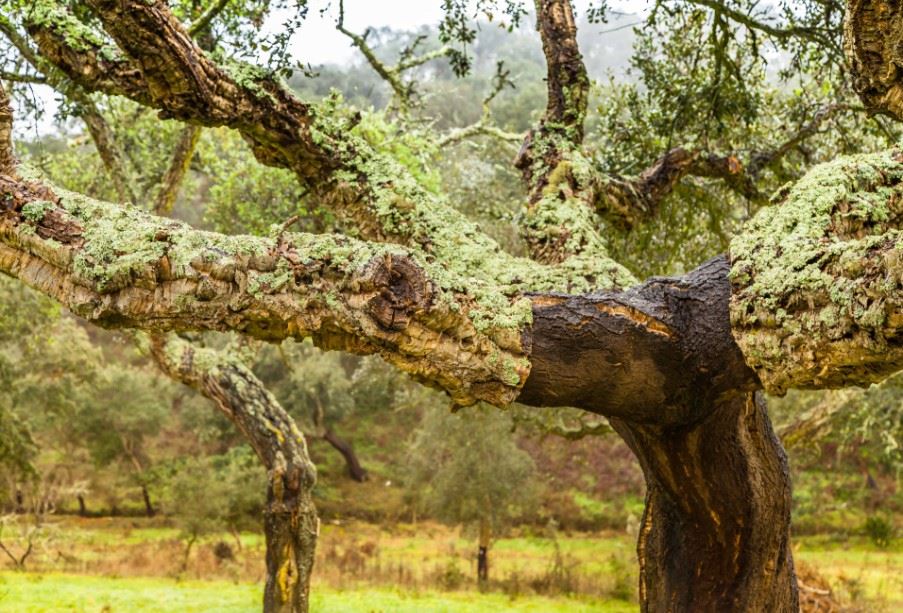 Finally, as it was my first visit to Portugal, what of the people?  Unfailingly, they were a pleasure to meet.  From the airport to our pousada and interaction with the people of Évora, we met with nothing but willing, helpful and cheerful people. We will always remember them – and the beautiful city of Évora.

It was only through a series of coincidences that we travelled to Évora: my winning a Sunvil voucher though a letter in the Sunday Telegraph’s Travel section chosen by Andrew Purvis; Sunvil’s suggestion of Évora as a destination; and finally the work of Rosanna who assembled a holiday itinerary, which ensured a smooth and trouble-free week.  Thank you.