We bundled ourselves off to the airport and soon enough were zipping in our hire car along the easy route south through Lisbon, over the Vasco Da Gama bridge. This stupendous feat of engineering wasn’t meant to be a feature of our holiday, but we just couldn’t help ourselves marvelling at the sheer ambition of the thing -  opened to traffic in 1998, complete with lengthy spokes and spindly, chic lamp posts. We were transported over the Tagus River and ever closer to our destination.

We had elected to try Alentejo, a region these days little more than an hour from the capital, yet apparently still very rural, with the largest cork forests in the world and an extremely long coast. It might just satisfy the varied needs of the three exacting Allen children - and their frazzled parents. 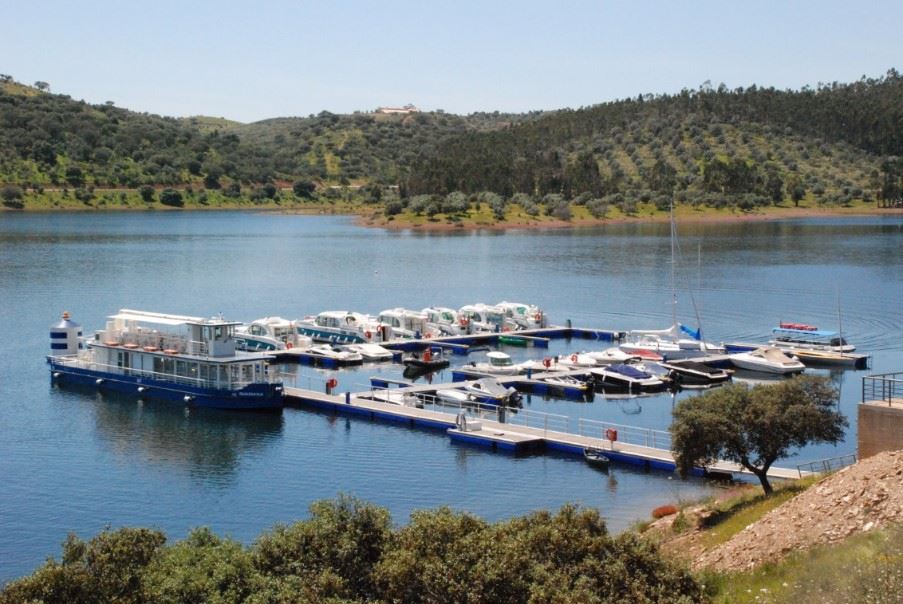 Through vineyards and olive groves, past electric pythons decked with glorious but slightly untidy stork nests, the soil grew evermore sandy. Already I was taking to this neglected little corner of Portugal.  Now we were skirting Setúbal, a bustling fishing port during Roman times and these days overlooked by the imposing battlements of the Castle of São Felipe, constructed in the 10th Century during the Moorish occupation. The fort was also the magnificent setting for a reception given by King Manuel I for Vasco da Gama, after the mariner’s discovery of the sea route to India in 1498.

We drove around the bay, and now a lone flamingo rose to the blue sky.  Gradually, we were beginning to relax into a forgotten existence of sunshine and peace.  ‘Faster, daddy, Faster!’ screamed my toddler Beatrice in my ear, as we neared the beach at Comporta. Next thing, we were sprinting to the shoreline, stripping frantically as we sped over the clean white sand and into the bracing sea.

The sun was lowering and we’d yet to seek out our accommodation, a self-catering villa situated on old farm land among the dark and ancient cork trees. There, it turned out, you could sit by the swimming pool, listen to the cooing of collar doves and think about dipping a toe in.

The next day we were off for a spot of dolphin watching in the Sado Estuary – now an important reserve and host to one of only three resident freshwater pods in Europe.

We settled to the gentle rhythms of the Alentejo countryside. Old ladies sold us bags of caracóis –that excellent snack which is snails – or we barbequed sardines. One day we ventured to the old city of Sines, and the very castle from where Vasco da Gama launched out.
There were more adventures to be had nearby, but the last few days we spent inland, navigating the Great Lake of Alqueva, where we took off in a house boat and for three gloriously innocent days played Swallows and Amazons.

By now we all felt like we were explorers. And of course, being human, we indeed are. But along the shores and in the poppy-laden fields of Alentejo we were reminded of that.

Where to go on holiday in November Rota Vicentina: The Alentejo and The Algarve February 2017 Sunvil Supper Club – Feijoada Choco Dot com or dot con? Don’t be a victim of holiday fraud Highlights of Northern Portugal Algarve beyond the beach resorts
Sagres – the end of the world The Queen’s 90th Birthday: A Royal Visit February 2016 Sunvil Supper Club – Fish and Shellfish Cataplana June 2016 Sunvil Supper Club – Octopus à lagareiro The Coronavirus | Airports Highlights of Central Portugal (Centro) A parting shot or two (to Faial). Part Four. Marvao - a marvellous hilltop fortress All for the love of travel | My Azores - Sue John EU referendum: What effect will the result have on your 2016 summer holiday? All for the love of travel | Looking forward Highlights of Aveiro – the Venice of Portugal Azores, Cascais and Lisbon – a family adventure by Emma Macfarlane The Michelin Star of the North Highlights of Lisbon All for the love of travel | Our 50th birthday All for the love of travel | Family time in the Algarve All aboard! Sunvil’s top 8 railway journeys throughout Europe and Latin America.  Where to go on holiday in June Aldeia da Luz: The village that moved Where to go on holiday in October Our top five scenic fly-drive holidays Notes from the field – Northern Portugal Illustrated Map: The Wine Growing Regions of Portugal The most westerly island of Europe: Flores, a hiker’s paradise Climbing Pico, Portugal’s highest mountain The Coronavirus | The latest news and advice The Alternative, Real Algarve Extremadura - a hidden treasure in western Spain bordering Portugal Whale & lava wine… Pico Island. Part Three. Booking a holiday IS legal Green means go. Amber means...? Read more inside The Algarve – Our Top 10 Cultural attractions Pastel de Nata – more than just a dessert All for the love of travel | Dreaming of our post-lockdown travels Tips for travelling post-lockdown Exploring the Douro Valley in Portugal Top 7 attractions of the Azores The Azores and their long connection with cheese All at Sea... looking for leviathans. Part Two. 10 things you didn’t know about the Azores Notes from the field – the Algarve Put quite simply the Azores are stunning A look forward to summer 2021 Discover the real Madeira Highlights of the Algarve Where to go on holiday in July Our top 5 destinations for wine lovers Travel to and within Europe from 01Jan21 Houseboat rental on the Alqueva reservoir Culinary delights of the Alentejo region of Portugal Discover the Alentejo: An Illustrated Map Where to go on holiday in March Alentejo Wine routes The Coronavirus | Portugal Evora - my impressions of this beautiful city. Guest blog by Jo Rogers All for the love of travel | Portugal Spring forward to one of our many favourite destinations in 2018 Portugal... what not to miss Mertola and the Mina de Sao Domingos Alentejo for foodies Portugal Passenger Locator Card The Rota Vicentina Where to go on holiday in January Alentejo for Culture Vultures The Alentejo - hidden Portugal Alentejo - Guest Blog by Mary Novakovich