All at Sea... looking for leviathans. Part Two.

Unlike the Europeans before 1984, when the hunting of whales ended in the Azores, I hadn’t come to fire harpoons at the world’s great roaming cetaceans but hopefully experience the joy of seeing them up close. The Azores is known to be one of the best destinations on earth to see them and has recorded over one-quarter of the known 80 or so species of whales and dolphins. 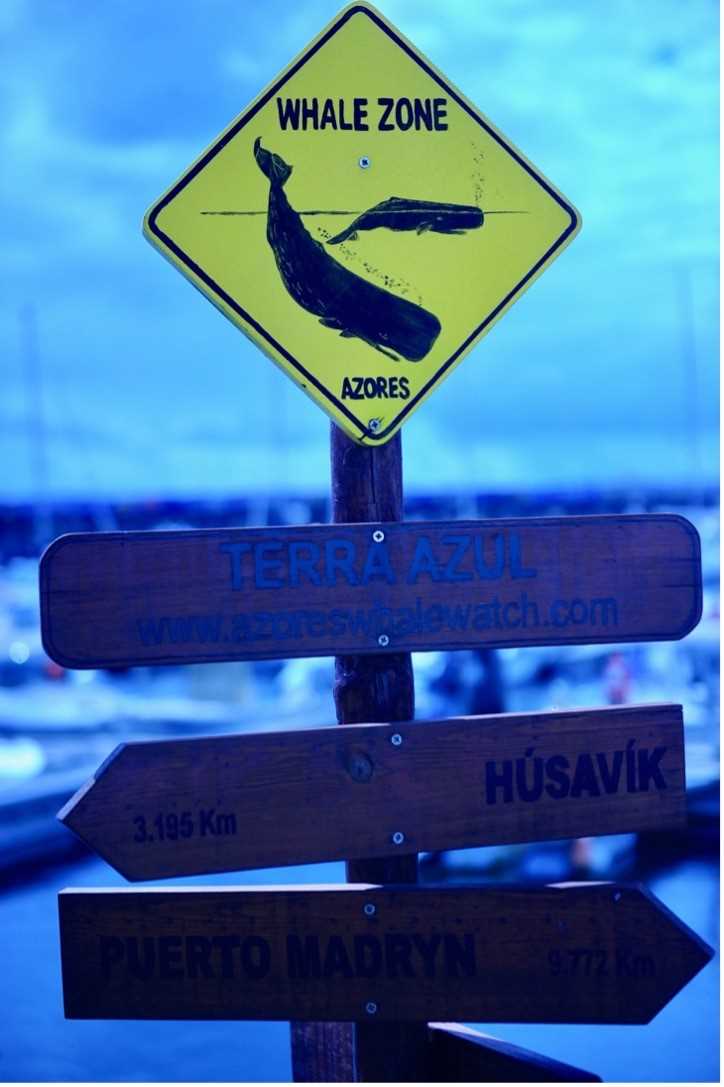 One particular species had eluded me during many whale quests over the years, the rather unfortunately named, sperm whale. Yet, joining a local operator, down at Ponta Delgada Harbour, my hopes were high. Generally, says Ana Castanheira, who would be our whale spotter that morning as we rode out onboard a zodiac inflatable, the sperm whales are resident and spend the whole year around the Azores. And the unfortunate name, I asked? “They have a large quantity of oil in their head for buoyancy, that was sought after by the whalers who hunted them,” says Ana, adding ‘it is a white coloured oil and they thought it looked like …”. I think you get the picture.

Our zodiac rode out quickly from the harbour on a calm sunny morning where the Atlantic and sky met in an indistinguishable and infinite blue horizon. 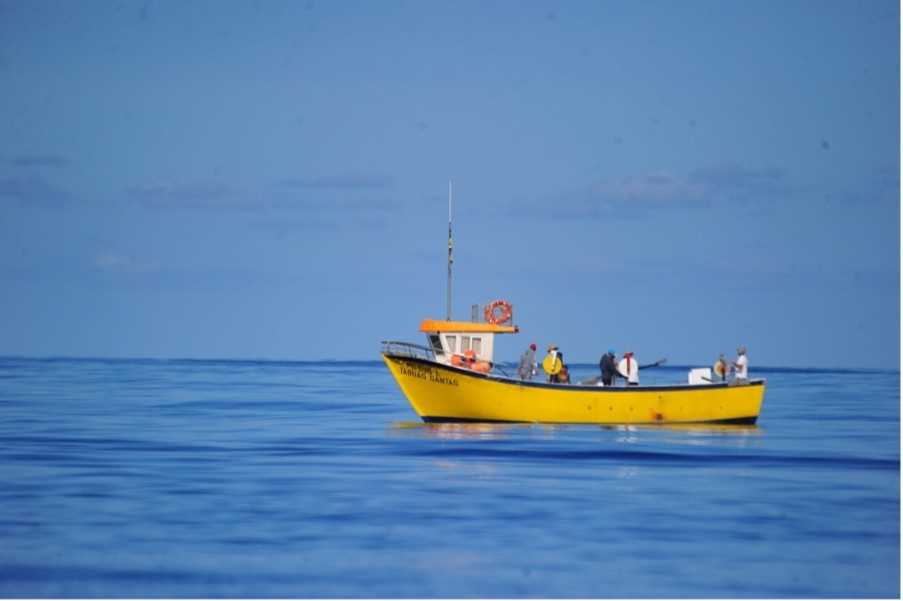 It was only a matter of minutes thereafter that as we pierced the Atlantic’s inky blueness when we encountered, firstly, common dolphins, and then a writhing pod of some hundred or so, bottlenose dolphins. 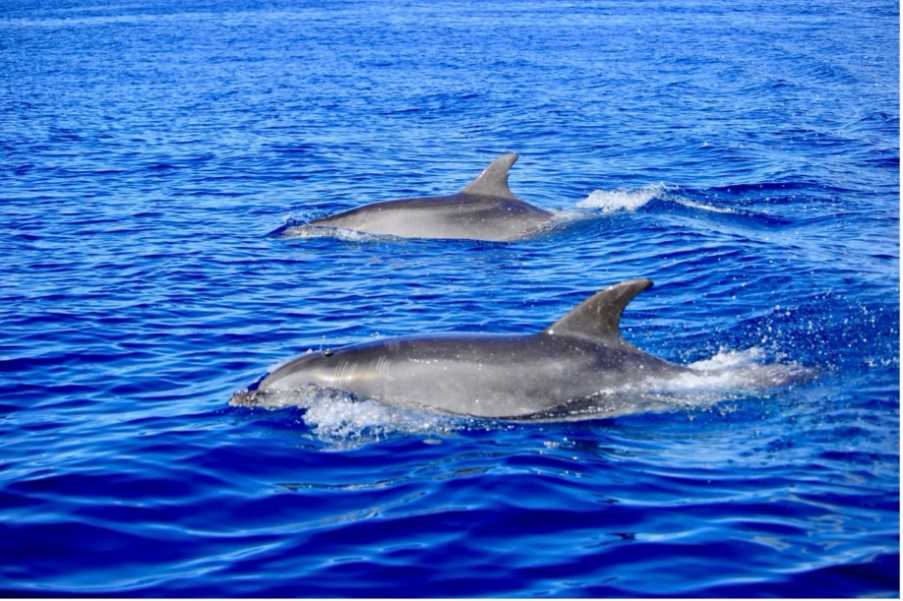 The faster skipper Rodrigo Cabral revved us forward the more frantic the bottlenose dolphins became. Riding the boats’ bow-waves and flinging themselves out of the sea, cartwheeling and landing with huge splashes. At one stage there must have been over one hundred of them around the boat.

Then after 30minutes at sea, the boat operator’s land spotter, called out sperm whales. Even from a distance these immense whales, which may reach 18metres in length, are easy to see as they have large bulbous heads.

My first ever sighting of a sperm whale 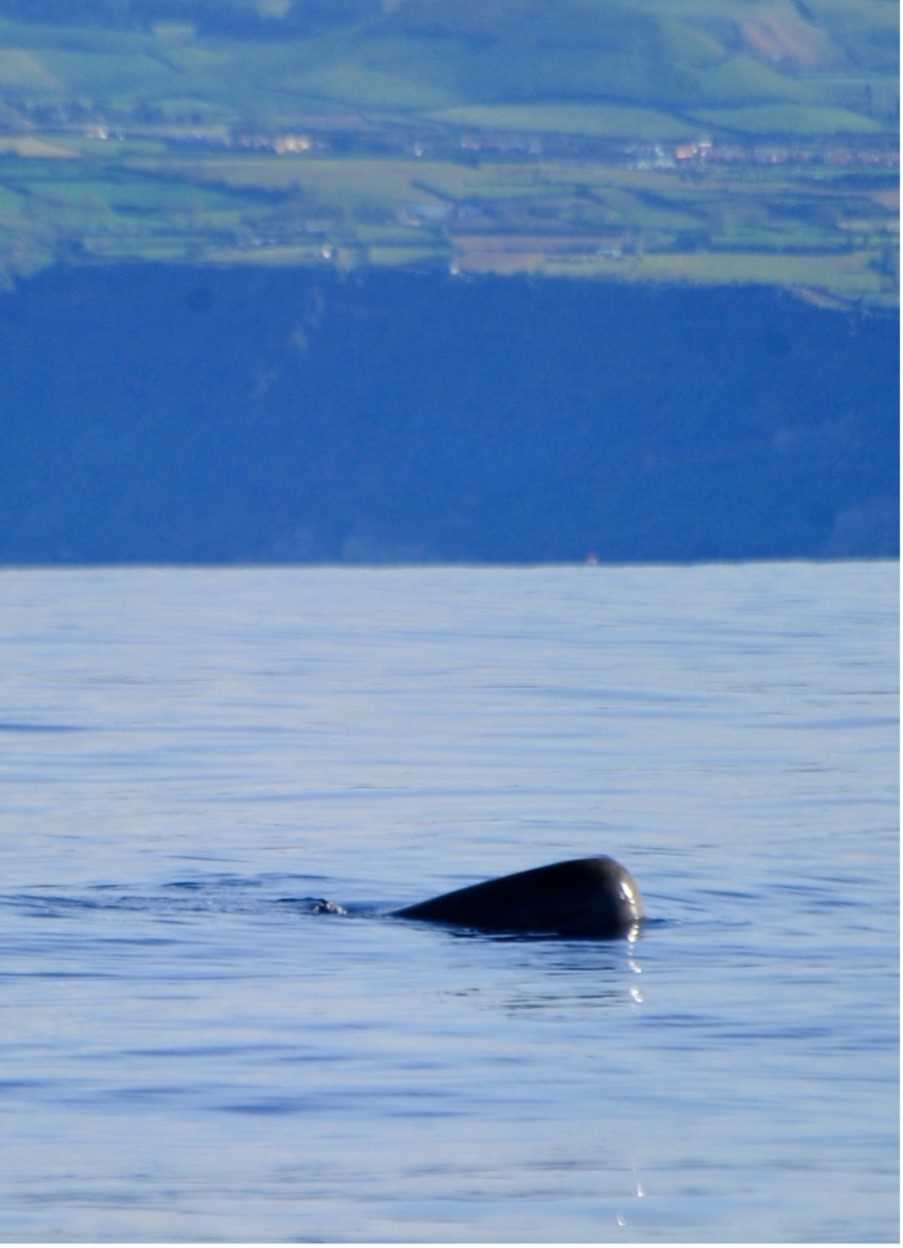 The sperm whales were thoroughly at ease yet would not allow us to get too close as they likely had calves. They are what is known as a toothed whales, so hunt aquatic life larger than phytoplankton, in their case, filling their considerable bulk with giant squids. We were able to watch several different groups for 15 minutes or sochilling on the water’s surface before they would dive to the Azorean depths, for up to three-hours or so.

I was pretty much on a high the entire afternoon as Joseph later took me around the strikingly lovely westernmost region of São Miguel Island, around a large volcanic complex named Lagoa Azul. 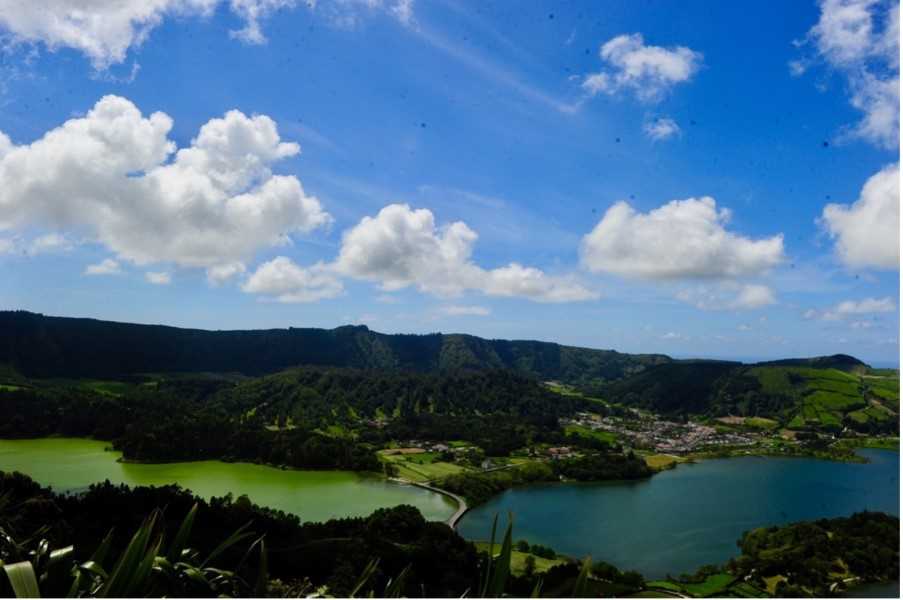 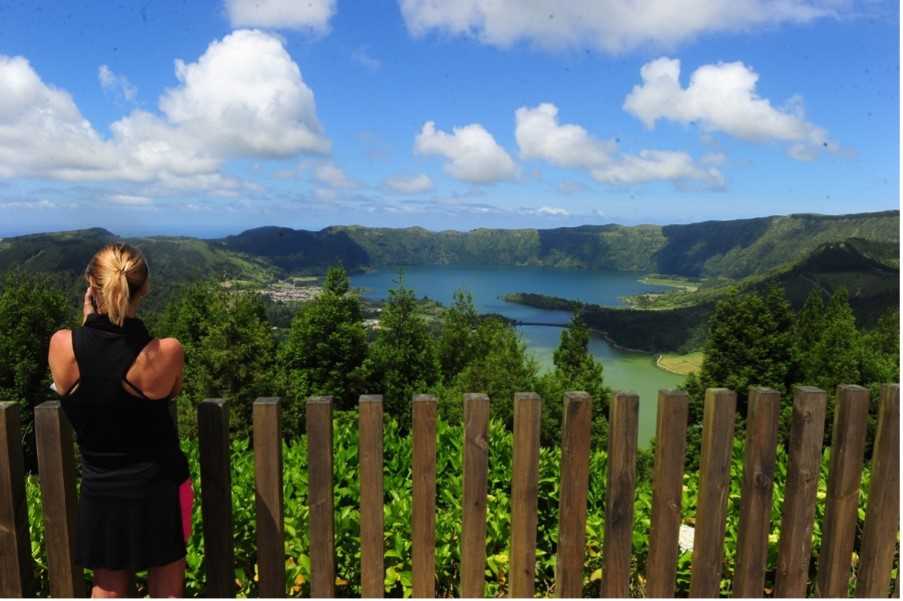 The twin-coloured lakes of Lagoa Azul – hues of peppermint green and milky blue – are trapped inside a huge dormant crater, which has not seen an eruption since 1439. The cliffs to the west of the volcano falls hundreds of meters into the Atlantic and offer blistering views along coastline towards teetering ash stacks and jet-black lava flows. My mind, however, was already thinking about seeing more whales. I have two more attempts over the next three days to search for them again. And who knows what other surprises were lurking in the depths around this divine archipelago.

Rugged coastal scenery near the western point of Mosteiros 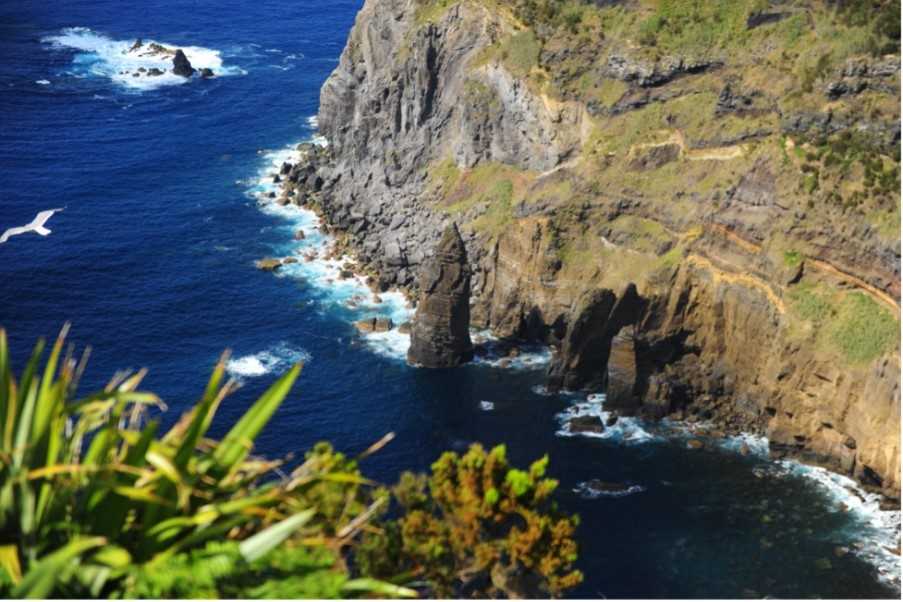 Travel to and within Europe from 01Jan21 February 2017 Sunvil Supper Club – Feijoada Choco Dot com or dot con? Don’t be a victim of holiday fraud Highlights of Northern Portugal Algarve beyond the beach resorts Sagres – the end of the world
The Queen’s 90th Birthday: A Royal Visit February 2016 Sunvil Supper Club – Fish and Shellfish Cataplana June 2016 Sunvil Supper Club – Octopus à lagareiro Houseboat rental on the Alqueva reservoir The Coronavirus | Airports Highlights of Central Portugal (Centro) A parting shot or two (to Faial). Part Four. Culinary delights of the Alentejo region of Portugal Marvao - a marvellous hilltop fortress All for the love of travel | My Azores - Sue John Discover the Alentejo: An Illustrated Map The Gentle Rhythms of the Alentejo Countryside- A guest blog by Benedict Allen EU referendum: What effect will the result have on your 2016 summer holiday? All for the love of travel | Looking forward Highlights of Aveiro – the Venice of Portugal Azores, Cascais and Lisbon – a family adventure by Emma Macfarlane Where to go on holiday in March The Michelin Star of the North Alentejo Wine routes The Coronavirus | Portugal Evora - my impressions of this beautiful city. Guest blog by Jo Rogers All for the love of travel | Portugal Highlights of Lisbon All for the love of travel | Our 50th birthday Spring forward to one of our many favourite destinations in 2018 All for the love of travel | Family time in the Algarve All aboard! Sunvil’s top 8 railway journeys throughout Europe and Latin America.  Where to go on holiday in June Portugal... what not to miss Aldeia da Luz: The village that moved Where to go on holiday in October Mertola and the Mina de Sao Domingos Our top five scenic fly-drive holidays Notes from the field – Northern Portugal Illustrated Map: The Wine Growing Regions of Portugal The most westerly island of Europe: Flores, a hiker’s paradise Climbing Pico, Portugal’s highest mountain The Coronavirus | The latest news and advice Alentejo for foodies The Alternative, Real Algarve Extremadura - a hidden treasure in western Spain bordering Portugal Portugal Passenger Locator Card The Rota Vicentina Whale & lava wine… Pico Island. Part Three. Booking a holiday IS legal Green means go. Amber means...? Read more inside The Algarve – Our Top 10 Cultural attractions Pastel de Nata – more than just a dessert All for the love of travel | Dreaming of our post-lockdown travels Tips for travelling post-lockdown Exploring the Douro Valley in Portugal Where to go on holiday in January Top 7 attractions of the Azores The Azores and their long connection with cheese 10 things you didn’t know about the Azores Notes from the field – the Algarve Put quite simply the Azores are stunning A look forward to summer 2021 Discover the real Madeira Highlights of the Algarve Alentejo for Culture Vultures The Alentejo - hidden Portugal Alentejo - Guest Blog by Mary Novakovich Where to go on holiday in July Our top 5 destinations for wine lovers