Rota Vicentina: The Alentejo and The Algarve

Since the inauguration of the Rota Vicentina in 2013, these marked walking and cycling trails have been increasing in popularity and now attract visitors from all across Europe.

The concept is simple. Stretching from the ancient town of Santiago do Cacem in the north, to the Cape of St Vincent in the south, the Rota Vicentina is divided into two: the 120km Fishermen’s Trail (predominantly coastal paths used by locals and fishermen to reach the beaches of the Alentejo and the Algarve), and the 230km Historical Trail (predominantly a rural trail running through villages, cork forests and across agricultural land).

The Fishermen’s Trail and Historical Trail are then sub-divided into smaller one-day walks, each starting and ending in a small community where accommodation, meals and drinks are on offer. The maximum distance recommended on a one-day walk is 25km, this is the route between Sao Luis and Odemira, and the minimum distance between stages is just 6km.

The creation and promotion of the Rota Vicentina is sustainable tourism in action, with local residents benefiting from the increased spending in their area; from the protection of their natural surroundings and from a growing pride in the spectacular landscape that they call home and in the traditional customs that they can share with their guests.

Businesses are springing up along the route including new guesthouses, activity companies, transfer companies, artisan shops and restaurant/snack bars.

It has also helped to extend the holiday season in the region with most visitors choosing to walk or cycle the route (or parts of it) from September to early June, out of the heat of the summer sun. This is also the time of the harvests (September), wild flowers in bloom (March, April, May) and bird migrations (September and October).

I have recently spent a week walking five stages of the Rota Vicentina and would highly recommend it to anyone wishing to really experience the Alentejo and Algarve regions of Portugal. You will come across lone fishermen standing on the rocks; couples bathing on stretches of unspoiled and uncrowded golden sand; farmers plowing their fields; eucalyptus, cork and bamboo forests and traditional villages and towns where you will sit side-by-side with local residents enjoying their lunchtime break.

Is it easy? It depends on the route that you follow. Each of the trails is graded from Easy to Difficult so you can choose the best option for you. All you need is a good pair of walking shoes, a hat, an ample supply of water and your camera.

The routes I walked were:

From the coastal town of Porto Corvo, the Fishermen’s Trail follows the Atlantic Coastline southwards to the estuary of the River Mira. A large proportion of the route is amongst the sand dunes that protect the region’s beaches and along the cliff top paths. The views are mesmerising and there are plenty of opportunities to take a dip or for a spot of sunbathing. 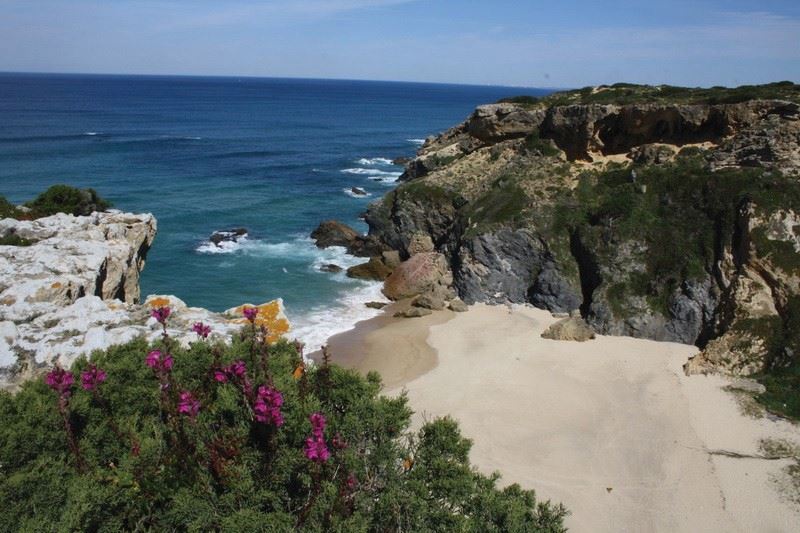 From the centre of Vila Nova de Milfontes, the Fishermen’s Trail crosses the estuary of the River Mira (a wonderful panorama) and journeys southwards towards the small coastal community of Almograve. Following close to the coastal path, you are rewarded with views of rocky and sandy coves as well as rural farms. This area is renowned for its swift population and we also saw a stork nesting on top of a sea stack. 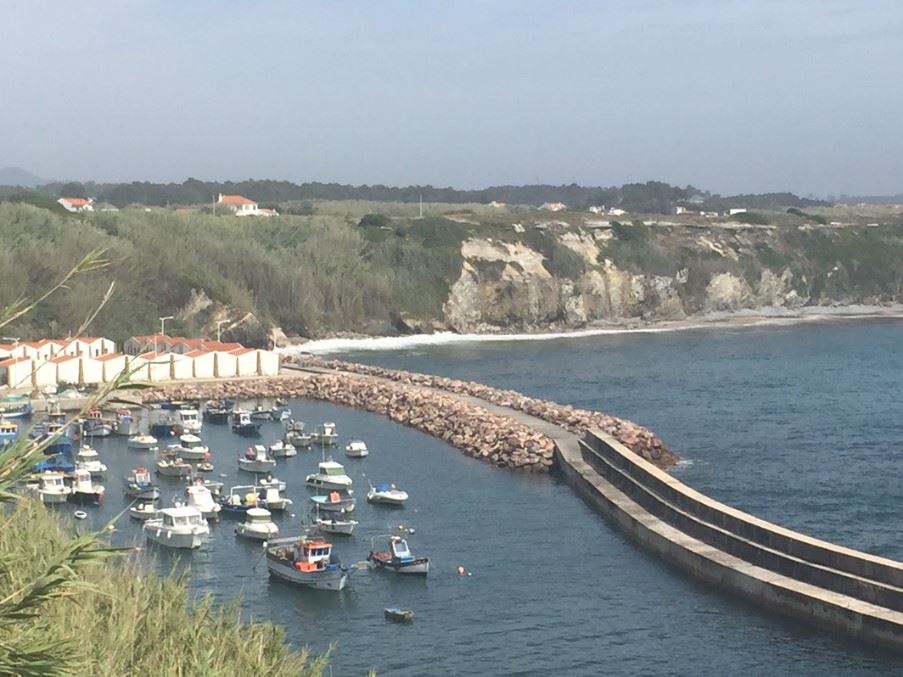 The meandering River Seixe joins the Atlantic Ocean at Praia de Odeceixe. The landscape of the final stages of the river valley is spectacular. It is a scene of lush, green countryside, of wild flowers and of sandy riverbanks. The Odeceixe circuit is a circular trail which initially follows the valley from the town of Odeceixe to its beach, before climbing to the cliff tops as a coastal trail and then inland past small rural hamlets, farms and into the hills of Monchique. 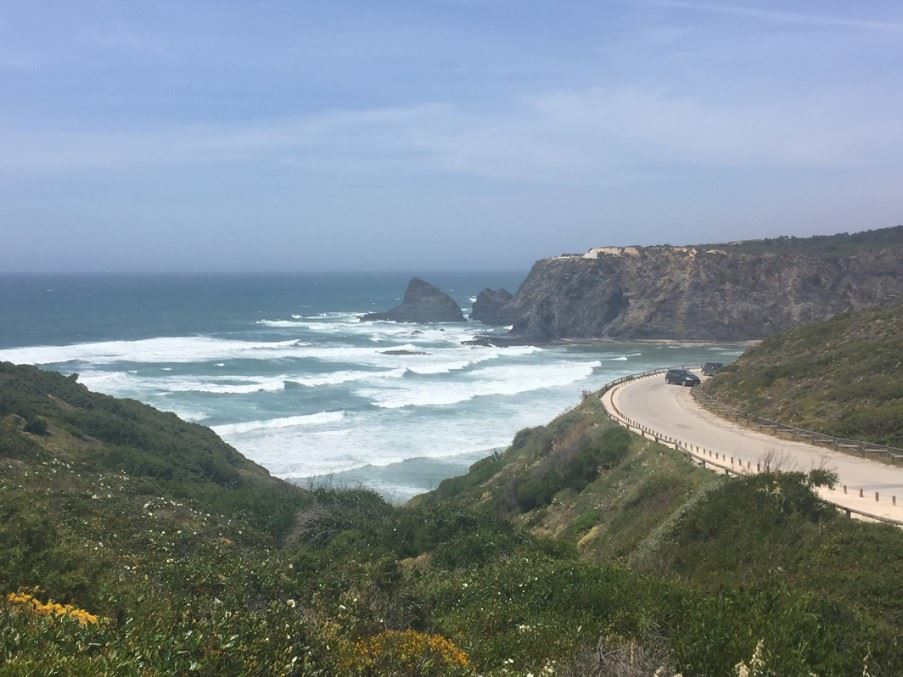 Pedralva to Vila do Bispo

The idyllic white-washed rural village of Pedralva is a sight to behold; colourful shutters; bouganvillia clinging to the historic buildings and flower boxes brightening up the cobbled streets. From here, the walk travels southwards passing vegetable gardens, grazing areas and orchards before reaching a pine forest on the outskirts of Vila do Bispo. There are far reaching views towards the ocean as you approach the town

Pedralva to Vila do Bispo 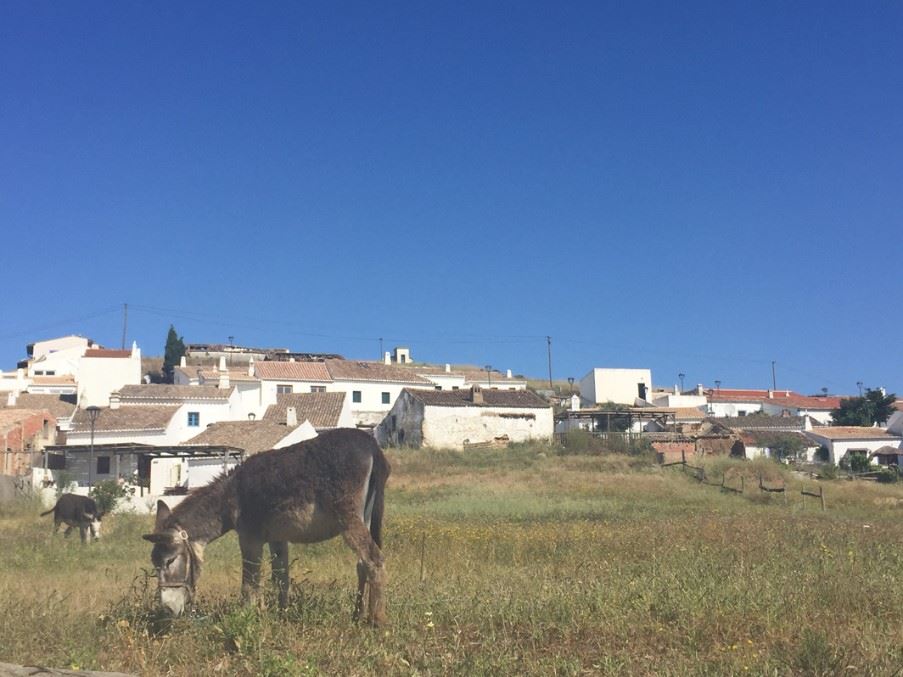 Vila do Bispo to Cape of St. Vincent

From Vila do Bispo, the walk initially follows the Historical Trail passing grazing and farm land. Donkeys, cows and an abundance of butterflies and birds accompany you on your stroll. After about 5km the path splits and you can choose to follow the Telheiro Beach Circuit (Fishermen’s Trail) towards Cabo de Sao Vicente or continue on the Historical Trail. We choose the beach circuit with offers wonderful coastal panoramas throughout. On either route, the town of Sagres and the lighthouse of Cabo de Sao Vicente can be seen throughout. 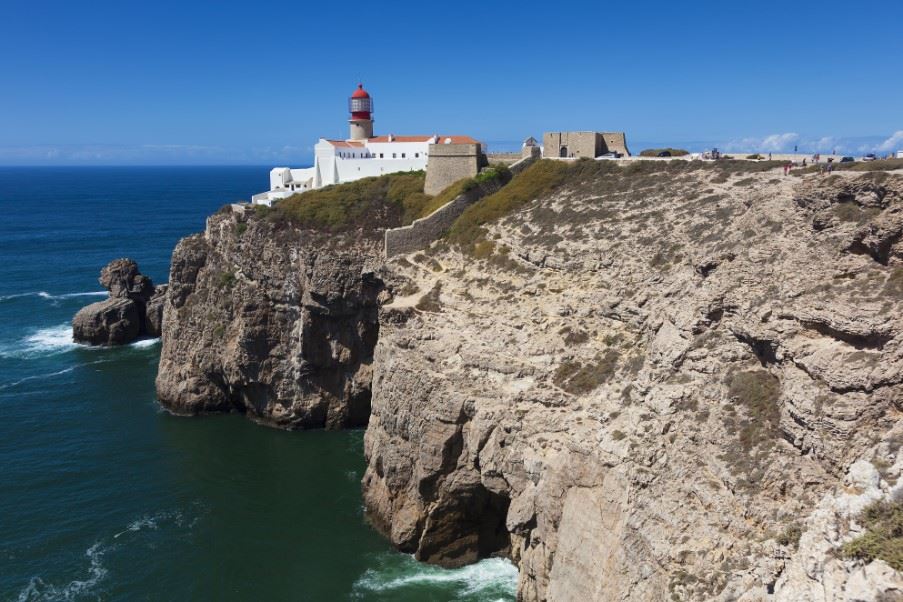 February 2017 Sunvil Supper Club – Feijoada Choco Dot com or dot con? Don’t be a victim of holiday fraud The Coronavirus | Airports Highlights of Northern Portugal Algarve beyond the beach resorts The Queen’s 90th Birthday: A Royal Visit
The Coronavirus | The latest news and advice February 2016 Sunvil Supper Club – Fish and Shellfish Cataplana June 2016 Sunvil Supper Club – Octopus à lagareiro Highlights of Central Portugal (Centro) A parting shot or two (to Faial). Part Four. Marvao - a marvellous hilltop fortress All for the love of travel | My Azores - Sue John EU referendum: What effect will the result have on your 2016 summer holiday? All for the love of travel | Looking forward Highlights of Aveiro – the Venice of Portugal Azores, Cascais and Lisbon – a family adventure by Emma Macfarlane The Michelin Star of the North Highlights of Lisbon All for the love of travel | Our 50th birthday All for the love of travel | Family time in the Algarve All aboard! Sunvil’s top 8 railway journeys throughout Europe and Latin America.  Where to go on holiday in June Aldeia da Luz: The village that moved Where to go on holiday in October Our top five scenic fly-drive holidays Notes from the field – Northern Portugal Illustrated Map: The Wine Growing Regions of Portugal The most westerly island of Europe: Flores, a hiker’s paradise Tips for travelling post-lockdown Climbing Pico, Portugal’s highest mountain The Alternative, Real Algarve Extremadura - a hidden treasure in western Spain bordering Portugal Whale & lava wine… Pico Island. Part Three. Booking a holiday IS legal Green means go. Amber means...? Read more inside Pastel de Nata – more than just a dessert All for the love of travel | Dreaming of our post-lockdown travels Exploring the Douro Valley in Portugal Top 7 attractions of the Azores The Azores and their long connection with cheese All at Sea... looking for leviathans. Part Two. 10 things you didn’t know about the Azores Notes from the field – the Algarve Put quite simply the Azores are stunning A look forward to summer 2021 Discover the real Madeira Highlights of the Algarve Zambujeira do Mar: the delights of Portugal’s Alentejo Coast Where to go on holiday in July Our top 5 destinations for wine lovers Where to go on holiday in November Travel to and within Europe from 01Jan21 Sagres – the end of the world Houseboat rental on the Alqueva reservoir Culinary delights of the Alentejo region of Portugal The Coronavirus | Portugal Discover the Alentejo: An Illustrated Map The Gentle Rhythms of the Alentejo Countryside- A guest blog by Benedict Allen Where to go on holiday in March Alentejo Wine routes Evora - my impressions of this beautiful city. Guest blog by Jo Rogers All for the love of travel | Portugal Spring forward to one of our many favourite destinations in 2018 Portugal... what not to miss Mertola and the Mina de Sao Domingos Alentejo for foodies Portugal Passenger Locator Card The Rota Vicentina The Algarve – Our Top 10 Cultural attractions Where to go on holiday in January Alentejo for Culture Vultures The Alentejo - hidden Portugal Alentejo - Guest Blog by Mary Novakovich