The 29th incarnation of the ICEHOTEL's Art Suites

The ICEHOTEL is based in the village of Jukkasjärvi, 200km north of the Arctic Circle. Geographically you are amongst the wildest northern reaches of Europe here. Each year it is visited by a remarkable 70,000 guests from all over the world. The well-renowned seasonal suites are also created and influenced by people from around the globe.

In the early winter of 2018 34 artists from 13 countries spent an intense couple of weeks in in Jukkasjärvi to create the 29th annual incarnation of the ICEHOTEL - the new suites opened on Friday 14 December, 2018.

The contributions came from Sweden, USA, India, Canada, Mexico and New Zealand to name but a few. British duo Jonathan and Marnie (father and daughter), were two of those involved, selected from 150 applicants to design and create a suite. Jonathan told the Telegraph that he had only ever made a snowman out of ice before - a giant leap away from their ‘The Living Ocean’ concept.

The Living Ocean is an underwater world with illuminated fish swimming along the cavernous sides, a shark appearing from the coral and a whale gliding overhead. The concept is about preserving our oceans and understanding how beautiful they are, as well as the rising awareness of the effects that we as humans have on them.

Looking at the following images, you can see that a great deal of the suites were inspired by nature and life.

The Living Ocean by Marnie Green and Jonathan Paul Green 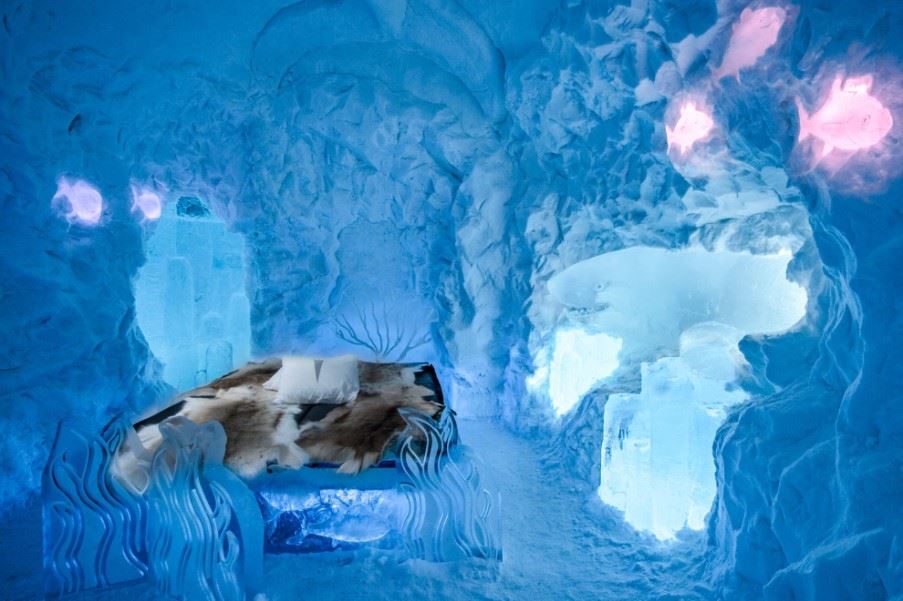 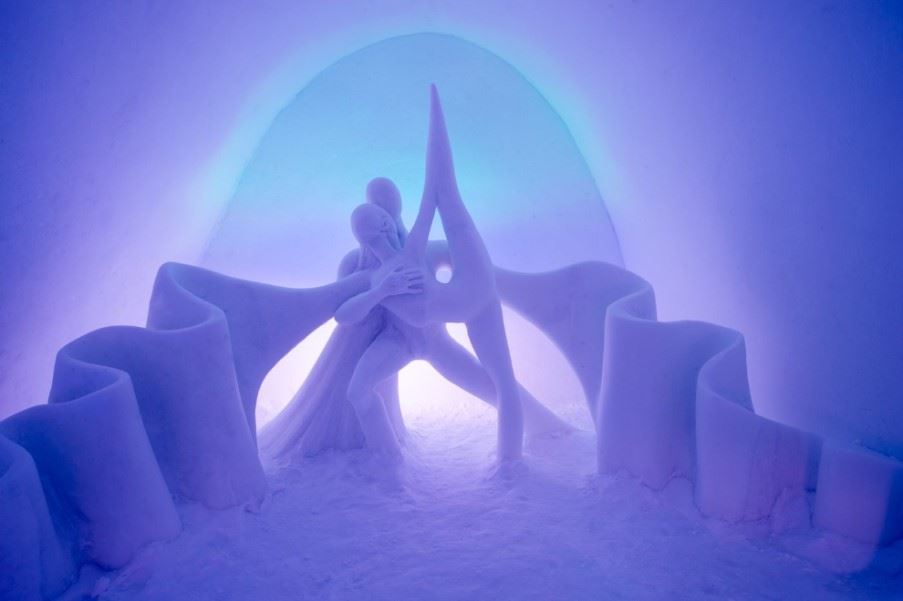 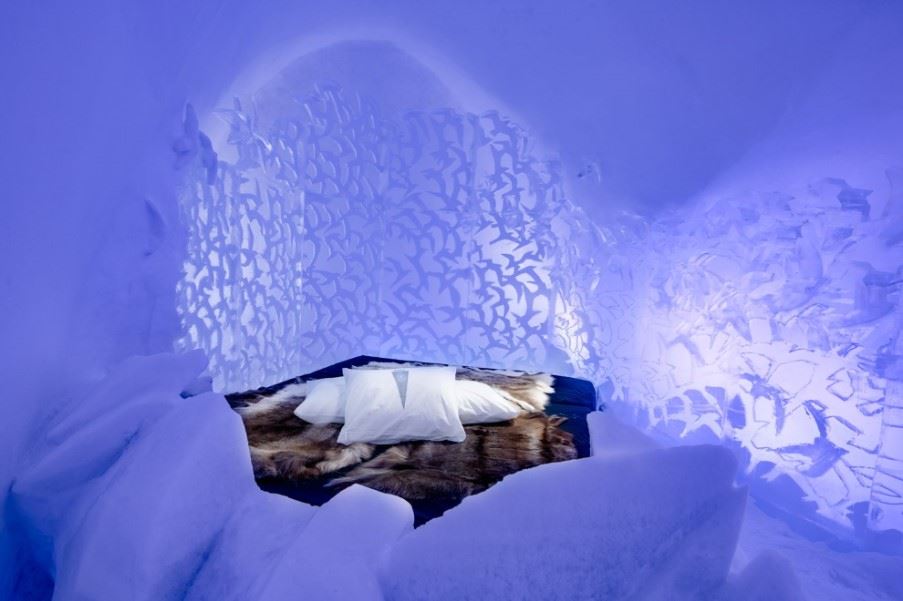 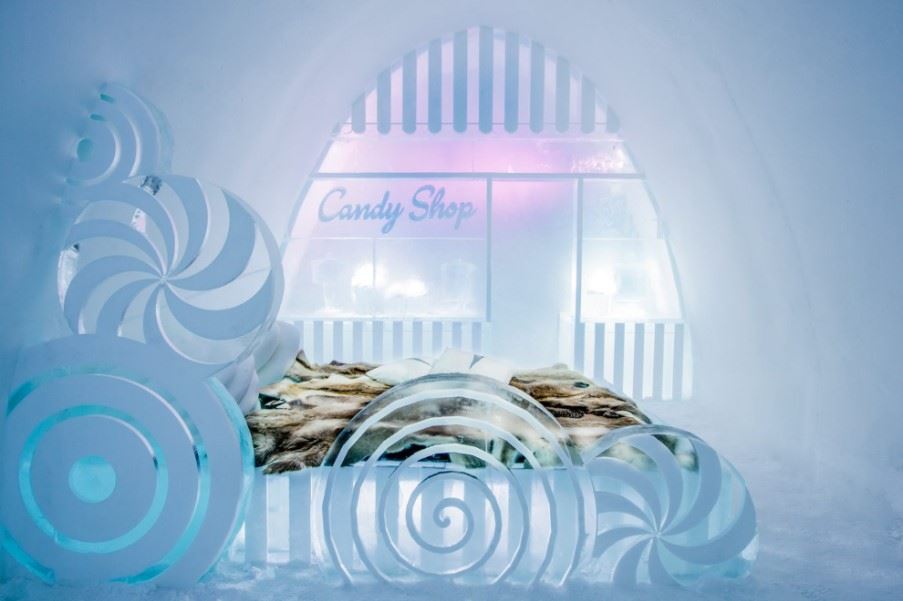 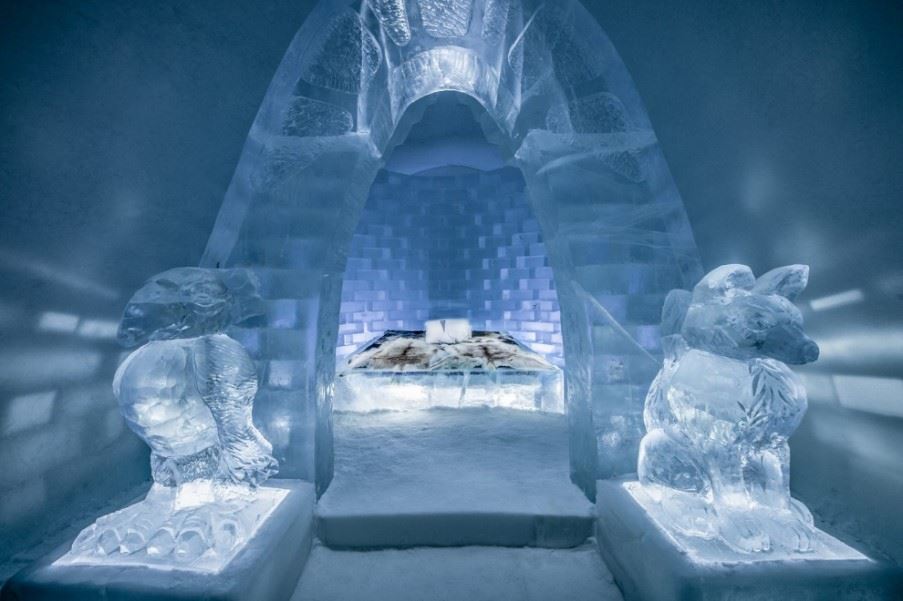 Kaamos Aurinko, the Sun of the Polar Night by Veronika Mayerbock, Katharina Wyss and Frank Dittman 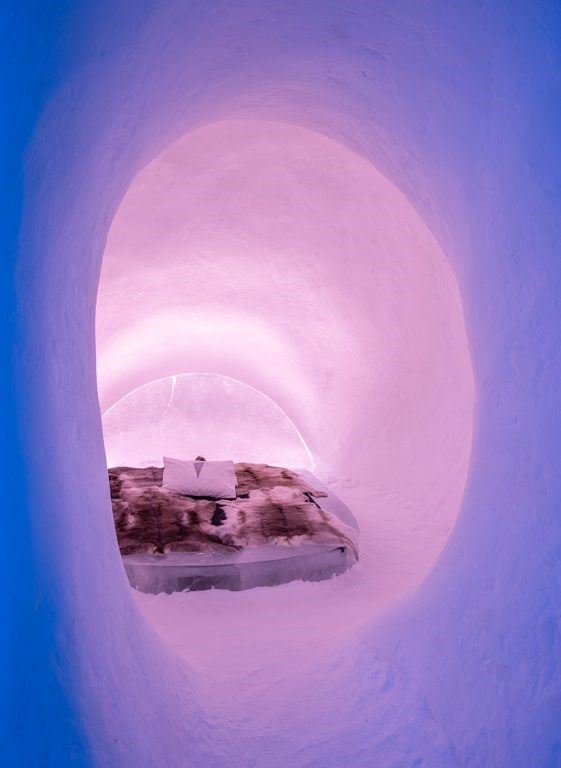 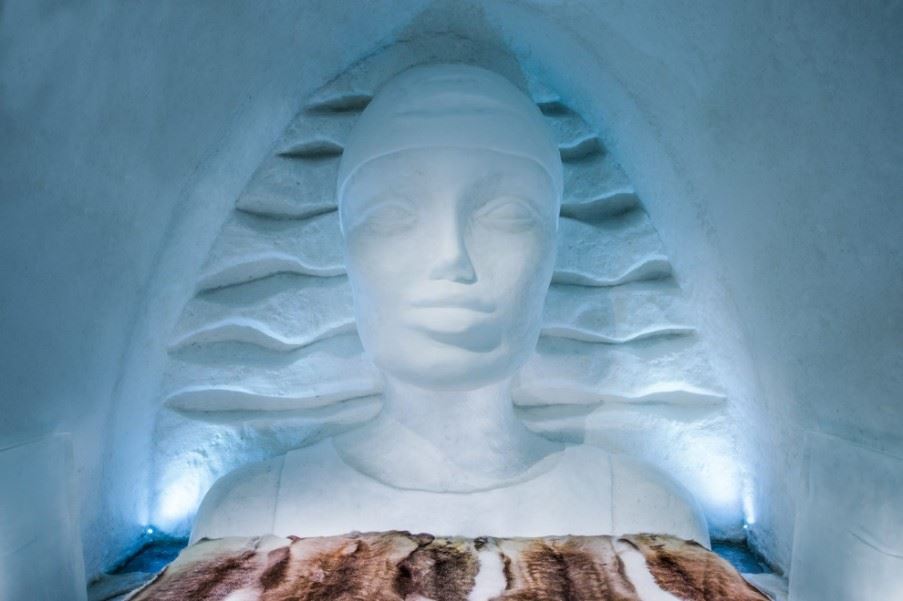 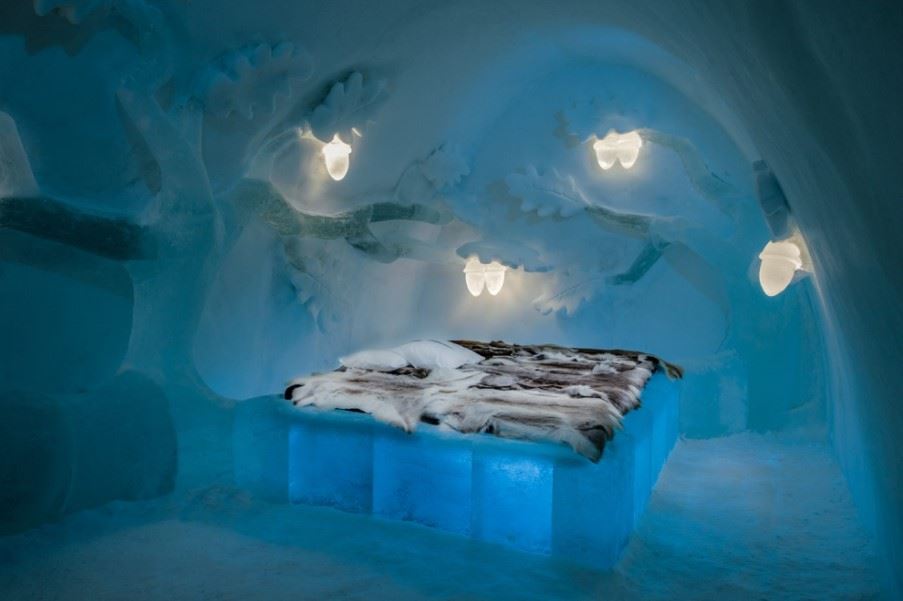 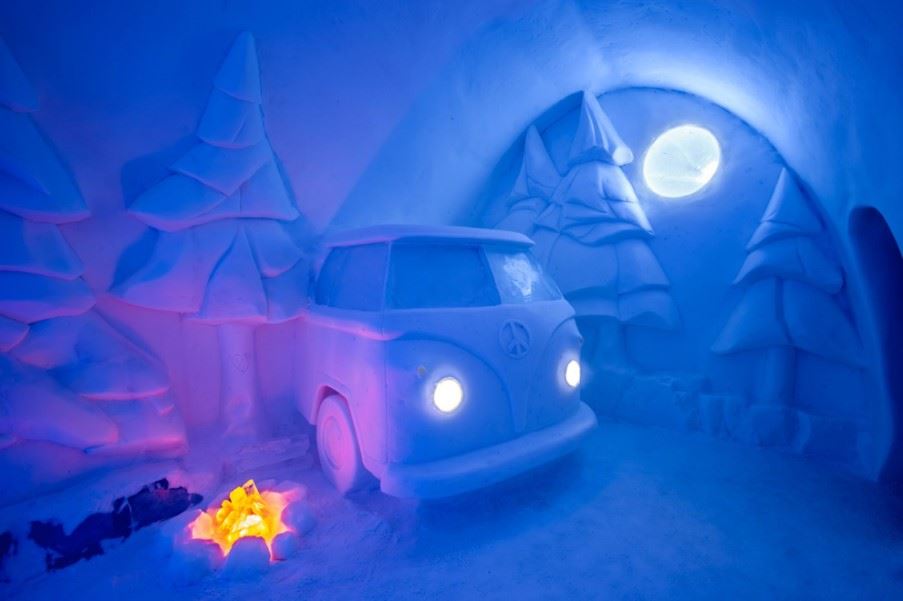 The Tao of Cat by Sonia Chow and Huschang Pourian

Here at Sunvil, we have offered holidays to Scandinavia for over a decade and have all visited, and stayed at the ICEHOTEL. We are Swedish specialists and can answer any questions you many have.

Our ICEHOTEL itinerary includes a 1-night stay in an individually decorated Art Suite (cold accommodation), followed by two nights in warm accommodation. A wealth of winter activities including snowmobile and dog-sled excursions are on offer. Northern Light excursions are also available, including an Aurora photo tour and an evening excursion on horseback. Click here for further information.

Exploring the Aeolian Islands The attractions of Chrani and surrounding Areas Cape Horn: A most memorable travel experience No-deal warning: don’t go on holiday after March 29 2019 | Sunvil's response Returning to our TV screens in April, 2017 – Corfu and The Durrells Trondheim, the original capital of Norway
10 reasons to go to Norway on your next holiday Highlights of Northern Portugal Notes from the field - Andalucia Sagres – the end of the world A walk in Thessaloniki’s Upper Town Walking in Kalami, Corfu Exploring Puglia – along Italy’s heel On the history trail in Cyprus 7 things not to miss in Argentina A slice of island life on Lipari Greece: The truth behind the headlines – Part Three 5 people you may not have known were Greek Barra da Tijuca – a very modern side of Rio Notes from the field – Corfu and Paxos Italy... what not to miss Tolon revisted Do come to Samos In 2016! Notes from the field – Brazil, Argentina & Uruguay May 2016 Sunvil Supper Club – Skopelos Goat and Prunes The unique wonders of the Galapagos Islands Notes from the field - Costa Rica 7 Facts about the Northern Lights Up and coming Greek islands An exciting glimpse of this year’s ICEHOTEL suites Golf Holidays in Cyprus Notes from the field – The Sacred Valley, Peru Questions to consider when planning a fly-drive holiday to Greece or Cyprus On the Trail of Aristotle Alentejo Wine routes Ammouliani – Halkidiki’s Secret Island Five unreal places in South America you have to visit Greece and the Mamma Mia Trail Stargazing in the Atacama Desert in Chile Monemvasia - A Plan For All Seasons Paphos – European Capital of Culture 2017 Highlights of Northern Norway Highlights of West Sweden Spectacular Lofoten Islands and Vesteralen Spotlight on Wildlife: Jaguar Discover the alternative activities on Ikaria Celebrating Carnival in South America Notes from the field – Puglia Gotland – Sweden’s Holiday Island Notes from the field – Northern Portugal Autumn escapes Paphos - European Capital of Culture 2017 Esteros del Iberá – Argentina’s secret natural wonder Notes from the field – Svalbard, Norway Discover UNESCO World Heritage sites on Cyprus ICEHOTEL 365 – the famous hotel becomes a year-round attraction Birdwatching holidays in Guatemala Island style: Luxury and boutique hotels in the Azores Holidays in the Peloponnese – a short introduction Oaxaca, Mexico’s Cultural Heart The Greek island of Samos and a journey to the land of Pythagoras The little-known sites of Ancient Greece Notes from the field – The Northern Fjords Staying at the ICEHOTEL in Sweden Great hikes and idle strolls on Crete Green means go. Amber means...? Read more inside Southern Albania as part of a twin-centre holiday The Algarve – Our Top 10 Cultural attractions Discover the Koster Islands, Sweden’s Secret Hideaway A Brief Guide to Thassos A day in Enna Celebrating Greek Easter 5 Ideas for Spa Breaks in Portugal Driving around Naxos The Azores May time in Greece Spotlight on Wildlife: Hummingbirds Who can you trust? Our 10 Best things to do in Florence, Italy 10 things you didn’t know about the Azores Leaves from a Greek Village 10 tips for travelling in 2022: learn from the experiences of the Sunvil team Notes from the field – the Algarve On the trail of Aristotle on his 2400th birthday Small-ship Amazon cruises The legends and charms of Lemnos Things to do in Norway while waiting for the Northern Lights Notes from the field – Svalbard, Norway 5 things to do on a summer holiday in northern Sweden The Alentejo - hidden Portugal Öland – a very Swedish holiday island 5 things to do when you miss your ferry on Skopelos! 5 highlights of a holiday in Chile Alternative activities in Ikaria San Ignacio Mini The five seasons of Svalbard A day in the Marine Park of Alonissos Greece Revisited Dion Alentejo - Guest Blog by Mary Novakovich Wild encounters in Latin America Limenas – the laid-back main town of Thassos Dodecanese – an introduction to 5 of the lesser-known islands