On the history trail in Cyprus 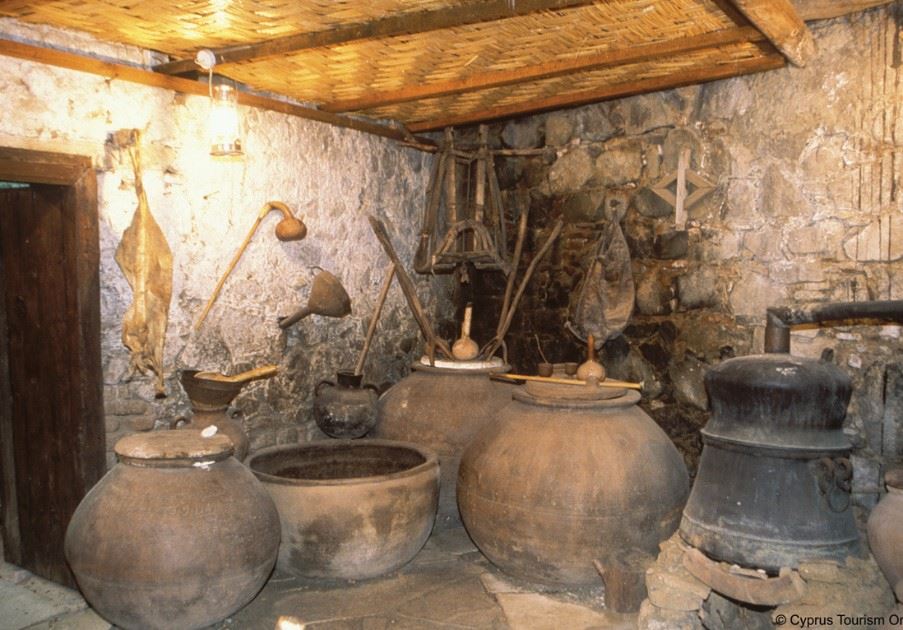 Take a look at a map and you’ll quickly see why Cyprus has seen so many invasions over the years. Within easy reach of Greece, Turkey, Egypt and Israel, it has been occupied by a succession of powers keen to have a strategic base in the centre of the Eastern Mediterranean. Greeks, Romans, Persians, Venetians and even the British have left their mark on Cyprus, and the result of these occupations is a land rich with historical treasures. A gentle drive around the island will reveal no shortage of fascinating discoveries from Cyprus’s colourful past. The big cities of Paphos, Larnaca and Nicosia each have well-known historical attractions, but there are also many lesser-known sites which are easily accessible by car. Here are just a few suggestions:

Khirokitia
Just off the motorway around halfway between Larnaca and Limassol, Khirokitia (or Choirokoitia) is the remains of a Cypriot Aceramic Neolithic settlement, dating back over 7,000 years. The artefacts on show suggest a sophisticated society which disappeared suddenly and without obvious explanation.  The more recent part of Khirokitia has ruins from the days of the Knights Templar.

Tenta
Just down the road from Khirokitia is another neolithic settlement about which many mysteries remain. The site at Kalavasos Tenta is believed to be around 7,000 years old. It remains a working archaeological site and recent finds include stone pots, and jewellery made from picrolite, a smooth green stone found in a local river bed.

Ancient Amathus
On the eastern outskirts of Limassol, the ancient city of Amathus was at one time one of the major trading cities on the island. Legend has it that Theseus and Ariadne were shipwrecked here and Ariadne was eventually abandoned by her minotaur-slaying man. What is not disputed is that the Persians, Phoenicians and Greeks dominated the city at various times, before it was eventually abandoned in the 7th century AD. The most important site at Amathus is an acropolis, now dominated by the ruins of a Roman temple to Aphrodite, but with origins dating back over 3,000 years.

Kurion
To the other side of Limassol are the ruins of the city of Kourion, founded in the 13th century BC. Its importance is such that it even gets a mention in an Egyptian inscription during the time of Ramses III (around 3200 years ago), as a place on his ‘wish list’ for occupation. While the origins of Kourion pre-date the Romans by some 1000 years, it is the Roman legacy which prevails, with Roman tombs, a nymphaeum and house believed to belong to a gladiator, with mosaic depictions of a gladiator battle.

Kolossi Castle
For those preferring their history a little more recent, Kolossi Castle (not far from Kurion and a few minutes’ drive from central Limassol) is one of the best preserved medieval castles in the Mediterranean. The current building was erected in the 15th century, and you can wander across the drawbridge, up and down the spiral staircases, and around the battlements.

Monemvasia - A Plan For All Seasons Returning to our TV screens in April, 2017 – Corfu and The Durrells Limenas – the laid-back main town of Thassos

Travel to and within Europe from 01Jan21 Dot com or dot con? Don’t be a victim of holiday fraud Where to go on holiday in April Cyprus Flight Pass Start of the 2018 holiday season Spreading Christmas cheer with Sunvil: Our top 7 destinations to visit during the festive period
Where to go on holiday in September EU referendum: What effect will the result have on your 2016 summer holiday? All for the love of travel | Looking forward She'll be coming around the mountain All for the love of travel | 8 reasons to visit Cyprus this autumn All for the love of travel | Our 50th birthday Spring forward to one of our many favourite destinations in 2018 The Coronavirus | Airports Where can Sunvil take you this spring? Our top five scenic fly-drive holidays Where to go on holiday in May Birdwatching holidays in Cyprus All for the love of travel | A warm welcome at the Axiothea awaits Booking a holiday IS legal Chasing sunshine in Cyprus - guest blog by Mandy Haakenson All for the love of travel | Back to basics, a Rep’s holiday Tips for travelling post-lockdown Where to go on holiday in January The Coronavirus | Cyprus A look forward to summer 2021 September 2016 Sunvil Supper Club – Keftedes (Cypriot Meatballs) The painted churches of the Troodos Mountains Wine villages of Cyprus All for the love of travel | My holidays with Sunvil Wildlife of the Troodos Mountains The Coronavirus | The latest news and advice World Book Day with the Sunvil Team Where to go on holiday in July Exploring the Aeolian Islands The attractions of Chrani and surrounding Areas Cape Horn: A most memorable travel experience No-deal warning: don’t go on holiday after March 29 2019 | Sunvil's response Returning to our TV screens in April, 2017 – Corfu and The Durrells Trondheim, the original capital of Norway 10 reasons to go to Norway on your next holiday Highlights of Northern Portugal Notes from the field - Andalucia Sagres – the end of the world A walk in Thessaloniki’s Upper Town Walking in Kalami, Corfu Exploring Puglia – along Italy’s heel 7 things not to miss in Argentina A slice of island life on Lipari Greece: The truth behind the headlines – Part Three 5 people you may not have known were Greek Barra da Tijuca – a very modern side of Rio Notes from the field – Corfu and Paxos Italy... what not to miss Tolon revisted Do come to Samos In 2016! Notes from the field – Brazil, Argentina & Uruguay May 2016 Sunvil Supper Club – Skopelos Goat and Prunes The unique wonders of the Galapagos Islands Notes from the field - Costa Rica 7 Facts about the Northern Lights Up and coming Greek islands An exciting glimpse of this year’s ICEHOTEL suites Notes from the field – The Sacred Valley, Peru On the Trail of Aristotle Alentejo Wine routes Ammouliani – Halkidiki’s Secret Island Five unreal places in South America you have to visit Greece and the Mamma Mia Trail Stargazing in the Atacama Desert in Chile Monemvasia - A Plan For All Seasons Highlights of Northern Norway Highlights of West Sweden Spectacular Lofoten Islands and Vesteralen Spotlight on Wildlife: Jaguar Discover the alternative activities on Ikaria Celebrating Carnival in South America The 29th incarnation of the ICEHOTEL's Art Suites Notes from the field – Puglia Gotland – Sweden’s Holiday Island Summer in Northern Sweden Notes from the field – Northern Portugal Greek Easter – in 2016, it’s the weekend of 29th April to 2nd May Esteros del Iberá – Argentina’s secret natural wonder Notes from the field – Svalbard, Norway ICEHOTEL 365 – the famous hotel becomes a year-round attraction Birdwatching holidays in Guatemala Island style: Luxury and boutique hotels in the Azores Holidays in the Peloponnese – a short introduction Oaxaca, Mexico’s Cultural Heart The Greek island of Samos and a journey to the land of Pythagoras The little-known sites of Ancient Greece Notes from the field – The Northern Fjords Staying at the ICEHOTEL in Sweden Notes from the field: Sao Miguel - Pico - Faial Great hikes and idle strolls on Crete Southern Albania as part of a twin-centre holiday The Algarve – Our Top 10 Cultural attractions Discover the Koster Islands, Sweden’s Secret Hideaway A Brief Guide to Thassos A day in Enna 5 Ideas for Spa Breaks in Portugal Driving around Naxos The Azores May time in Greece Spotlight on Wildlife: Hummingbirds Who can you trust? Our 10 Best things to do in Florence, Italy 10 things you didn’t know about the Azores Leaves from a Greek Village Notes from the field – the Algarve On the trail of Aristotle on his 2400th birthday Small-ship Amazon cruises The legends and charms of Lemnos Things to do in Norway while waiting for the Northern Lights Notes from the field – Svalbard, Norway 5 things to do on a summer holiday in northern Sweden The Alentejo - hidden Portugal Öland – a very Swedish holiday island 5 things to do when you miss your ferry on Skopelos! Zambujeira do Mar: the delights of Portugal’s Alentejo Coast My experience at the TreeHotel 5 highlights of a holiday in Chile Alternative activities in Ikaria San Ignacio Mini The five seasons of Svalbard A day in the Marine Park of Alonissos Greece Revisited Dion Alentejo - Guest Blog by Mary Novakovich Wild encounters in Latin America Limenas – the laid-back main town of Thassos Dodecanese – an introduction to 5 of the lesser-known islands Golf Holidays in Cyprus Questions to consider when planning a fly-drive holiday to Greece or Cyprus Paphos – European Capital of Culture 2017 Autumn escapes Paphos - European Capital of Culture 2017 Discover UNESCO World Heritage sites on Cyprus Green means go. Amber means...? Read more inside