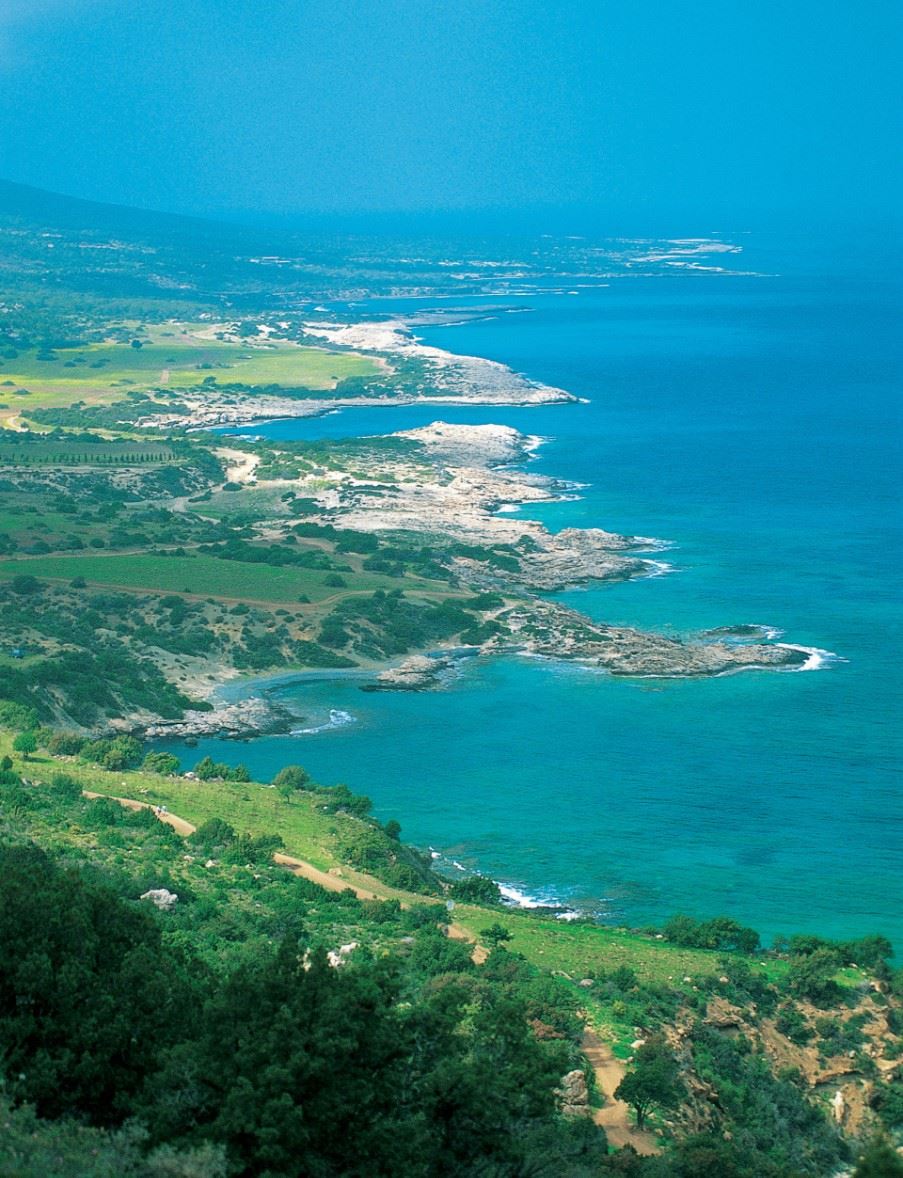 For those who consider a round (or more) of golf as an essential part of their holidays, Cyprus offers a year-round option with several courses within easy driving distance of the main coastal towns. The high summer temperatures may necessitate an early or late round, but for the rest of the year the climate on Cyprus provides ideal conditions for golf. Golf is a relatively recent addition to the island landscape, and as a result the courses and facilities are all relatively modern. While it’s easy enough to leave your precise golf arrangements until you arrive in Cyprus, here are three courses near Paphos which you might want to include in your holiday golf plans.

This is the oldest course in Cyprus, having been designed by the famous architect David Steel in 1994, with recent upgrading by the equally celebrated Tom MacKenzie and Martin Ebert.  It is set beside the village of Tsada, in the rolling, gently-sloping grounds of a 12th-century monastery. Holes are surrounded by olive groves, grapevines and almond trees,  lending a distinctly Mediterranean flavour to the genteel surroundings. It’s a looped course, meaning the both sets of 9 holes begin and end at the clubhouse, allowing an option of a 9- or 18-hole round (with a drink stop in the middle!)

Minthis Hills Golf Club is around 20 minutes’ drive from Paphos. A single round of 18 holes costs between €70 and €85 depending on the season. Minimum handicaps are 28 for men and 36 for ladies.

This prestigious course was designed by Nick Faldo with an emphasis on strategic play rather than big hitting. There are challenges (or riddles, as Faldo calls them) as you make your way around the course, which has retained some of the landscape’s natural features in an attempt to minimise excess water usage and to protect the native wildlife. There’s a very impressive clubhouse with several restaurants and bars, as well as balconies and terraces offering views over the course and down to the sea.

Eléa Estate is on the outskirts of Paphos. A single round of 18 holes costs between €79 and €98 depending on the season, with a discount for online bookings.

Beside the Petra tou Romiou (Aphrodite’s Rock) landmark, said to represent the birthplace of the Greek goddess of love, the landscape around this course is one of mature trees and scenic rock formations. The course was designed in 1996 by architect Iacovos Iacovou, and along with the pretty setting, the club offers a restaurant, one-to-one tuition and even an upmarket villa and apartment complex.

Secret Valley Golf Club is also around 20 minutes’ drive from Paphos. A single round of 18 holes costs between €65 and €90 depending on the season. Minimum handicaps are 28 for men and 36 for ladies (those without a handicap can play in the afternoon by request).

Travel to and within Europe from 01Jan21 Dot com or dot con? Don’t be a victim of holiday fraud The Coronavirus | Airports Where to go on holiday in April Cyprus Flight Pass Start of the 2018 holiday season
Spreading Christmas cheer with Sunvil: Our top 7 destinations to visit during the festive period The Coronavirus | Cyprus Where to go on holiday in September EU referendum: What effect will the result have on your 2016 summer holiday? All for the love of travel | Looking forward She'll be coming around the mountain All for the love of travel | 8 reasons to visit Cyprus this autumn The Coronavirus | The latest news and advice All for the love of travel | Our 50th birthday Spring forward to one of our many favourite destinations in 2018 Where can Sunvil take you this spring? Our top five scenic fly-drive holidays Where to go on holiday in May Tips for travelling post-lockdown Birdwatching holidays in Cyprus All for the love of travel | A warm welcome at the Axiothea awaits Booking a holiday IS legal Chasing sunshine in Cyprus - guest blog by Mandy Haakenson All for the love of travel | Back to basics, a Rep’s holiday Where to go on holiday in January A look forward to summer 2021 September 2016 Sunvil Supper Club – Keftedes (Cypriot Meatballs) The painted churches of the Troodos Mountains Wine villages of Cyprus All for the love of travel | My holidays with Sunvil Wildlife of the Troodos Mountains World Book Day with the Sunvil Team Where to go on holiday in July Exploring the Aeolian Islands The attractions of Chrani and surrounding Areas Cape Horn: A most memorable travel experience No-deal warning: don’t go on holiday after March 29 2019 | Sunvil's response Returning to our TV screens in April, 2017 – Corfu and The Durrells Trondheim, the original capital of Norway 10 reasons to go to Norway on your next holiday Highlights of Northern Portugal Notes from the field - Andalucia Sagres – the end of the world A walk in Thessaloniki’s Upper Town Walking in Kalami, Corfu Exploring Puglia – along Italy’s heel 7 things not to miss in Argentina A slice of island life on Lipari Greece: The truth behind the headlines – Part Three 5 people you may not have known were Greek Barra da Tijuca – a very modern side of Rio Notes from the field – Corfu and Paxos Italy... what not to miss Tolon revisted Do come to Samos In 2016! Notes from the field – Brazil, Argentina & Uruguay May 2016 Sunvil Supper Club – Skopelos Goat and Prunes The unique wonders of the Galapagos Islands Notes from the field - Costa Rica 7 Facts about the Northern Lights Up and coming Greek islands An exciting glimpse of this year’s ICEHOTEL suites Notes from the field – The Sacred Valley, Peru On the Trail of Aristotle Alentejo Wine routes Ammouliani – Halkidiki’s Secret Island Five unreal places in South America you have to visit Greece and the Mamma Mia Trail Stargazing in the Atacama Desert in Chile Monemvasia - A Plan For All Seasons Highlights of Northern Norway Highlights of West Sweden Spectacular Lofoten Islands and Vesteralen Spotlight on Wildlife: Jaguar Discover the alternative activities on Ikaria Celebrating Carnival in South America The 29th incarnation of the ICEHOTEL's Art Suites Notes from the field – Puglia Gotland – Sweden’s Holiday Island Summer in Northern Sweden Notes from the field – Northern Portugal Greek Easter – in 2016, it’s the weekend of 29th April to 2nd May Esteros del Iberá – Argentina’s secret natural wonder Notes from the field – Svalbard, Norway ICEHOTEL 365 – the famous hotel becomes a year-round attraction Birdwatching holidays in Guatemala Island style: Luxury and boutique hotels in the Azores Holidays in the Peloponnese – a short introduction Oaxaca, Mexico’s Cultural Heart The Greek island of Samos and a journey to the land of Pythagoras The little-known sites of Ancient Greece Notes from the field – The Northern Fjords Staying at the ICEHOTEL in Sweden Notes from the field: Sao Miguel - Pico - Faial Great hikes and idle strolls on Crete Southern Albania as part of a twin-centre holiday The Algarve – Our Top 10 Cultural attractions Discover the Koster Islands, Sweden’s Secret Hideaway A Brief Guide to Thassos A day in Enna 5 Ideas for Spa Breaks in Portugal Driving around Naxos The Azores May time in Greece Spotlight on Wildlife: Hummingbirds Who can you trust? Our 10 Best things to do in Florence, Italy 10 things you didn’t know about the Azores Leaves from a Greek Village Notes from the field – the Algarve On the trail of Aristotle on his 2400th birthday Small-ship Amazon cruises The legends and charms of Lemnos Things to do in Norway while waiting for the Northern Lights Notes from the field – Svalbard, Norway 5 things to do on a summer holiday in northern Sweden The Alentejo - hidden Portugal Öland – a very Swedish holiday island 5 things to do when you miss your ferry on Skopelos! Zambujeira do Mar: the delights of Portugal’s Alentejo Coast My experience at the TreeHotel 5 highlights of a holiday in Chile Alternative activities in Ikaria San Ignacio Mini The five seasons of Svalbard A day in the Marine Park of Alonissos Greece Revisited Dion Alentejo - Guest Blog by Mary Novakovich Wild encounters in Latin America Limenas – the laid-back main town of Thassos Dodecanese – an introduction to 5 of the lesser-known islands On the history trail in Cyprus Questions to consider when planning a fly-drive holiday to Greece or Cyprus Paphos – European Capital of Culture 2017 Autumn escapes Paphos - European Capital of Culture 2017 Discover UNESCO World Heritage sites on Cyprus Green means go. Amber means...? Read more inside