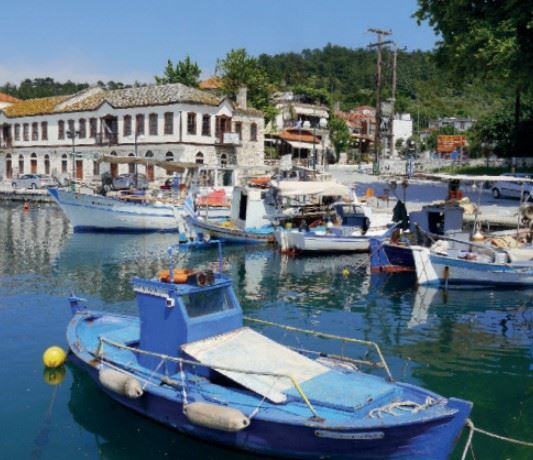 There are some Greek islands which attract a loyal band of devotees: people who return year after year, who on one hand want to tell their friends what a wonderful place they’ve discovered, but on the hand want to keep it a secret and avoid it being transformed by the over-development inevitably brought by mass tourism.

Thassos is certainly one of those islands, and it’s easy to see why so many people love to come back again and again. Lying around 80 miles from the northern city of Thessaloniki, access is by ferry from Keramoti on the mainland (Kavala is the nearest airport, with once-weekly flights from Manchester and Gatwick). While the transfers are hardly onerous, they keep the island’s tourist traffic at a sustainable and sensible level; a large bulk of Thassos’s tourism comes from mainland Greece. Thassos is the most northerly of the Greek islands and it’s also the greenest. Around its coast there are several sandy beaches, all within easy access of the road which runs the 60 miles or so around the circumference of the island.

Thassos Town, known on the island as Limenas, is at the northern tip of Thassos and is the main hub of the island; it’s also where you’ll find the ferry terminal serving Keramoti. On the surface it’s a laid-back, fairly typical island town: there’s a pretty harbour with a sandy beach just beyond it, while the winding lanes of the old town hide a collection of cafes, restaurants and shops (don’t leave without picking up a jar of Thassos honey). It’s a great place to take an evening stroll on the waterfront before or after dinner, stopping for a drink or an ice-cream along the way. There is some nightlife but it’s hardly on the scale of the more popular resort islands further south.

Beneath its modern appearance the town of Limenas reveals a rich history, and its white marble attracted the attention of ‘visitors’ as far back as the Ancient Greeks, the Persians and the Romans. The old inhabitants chose exactly the same spot for their settlement and you’ll find plenty of ruins around the town. There’s a theatre from the 5th century BC, as well as an acropolis and an agora (central meeting/market place). An archaeological museum helps piece together some of the finds in and around Limenas, but it’s fair to assume that the vast majority of the town’s ancient secrets remain as yet undiscovered. One of the highlights of the museum is the 3.5-metre high kouros, a stone sculpture probably made for the worship of Apollo and dating back over 2,500 years. In fact the archaeological heritage of Thassos is such that you’ll find relics from the island in museums as far away as Paris and Boston.

For something a little more modern, the Kalogeriko building by the old harbour has a display of traditional Thassian home from the 19th century. The building also plays host to regular exhibitions by local photographers, artists and jewellers.

Monemvasia - A Plan For All Seasons Returning to our TV screens in April, 2017 – Corfu and The Durrells On the history trail in Cyprus